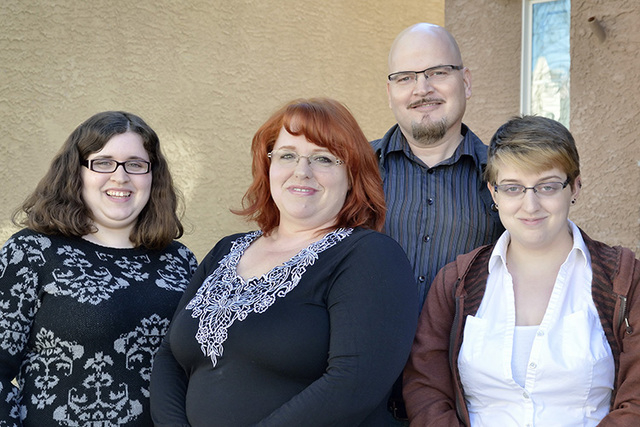 Tegan Stover, left, is shown with, from left, her mother, Joanne, father, James, and sister Hannah at Tegan and her boyfriend's house in southwest Las Vegas. (Bill Hughes/Las Vegas Review-Journal) 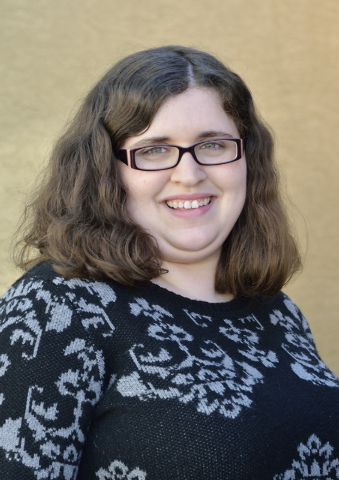 Tegan Stover was diagnosed with Tourette's syndrome at the age of 8. With support of family and friends, as well as medication and therapy, she is coping with the condition. (Bill Hughes/Las Vegas Review-Journal) 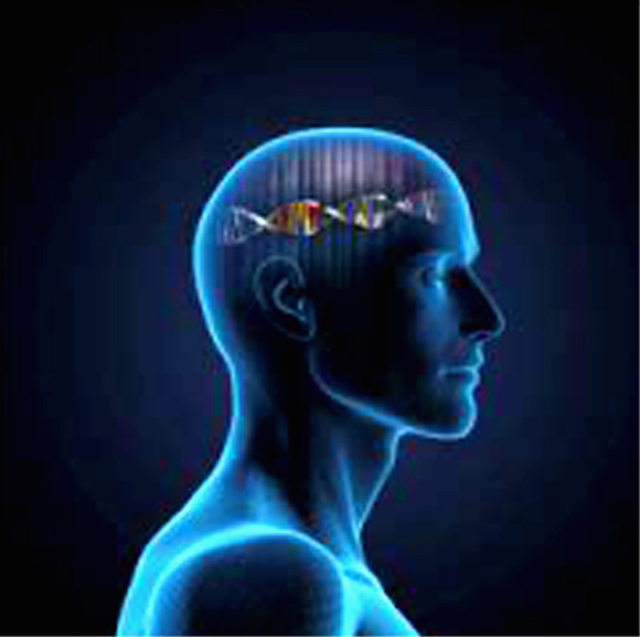 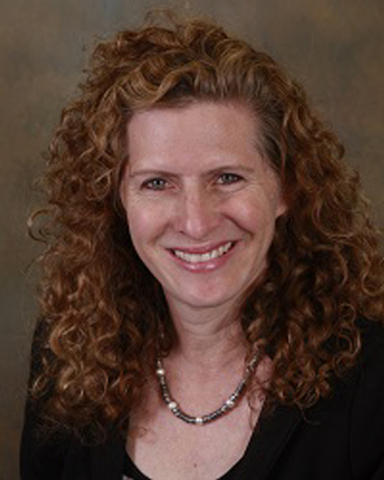 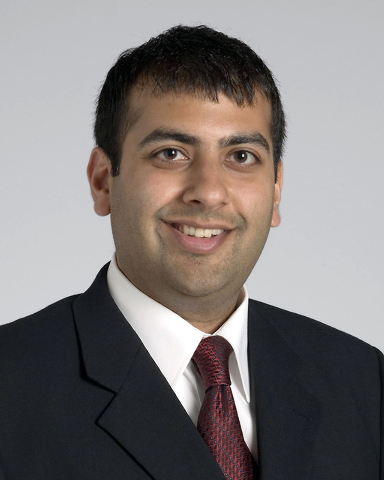 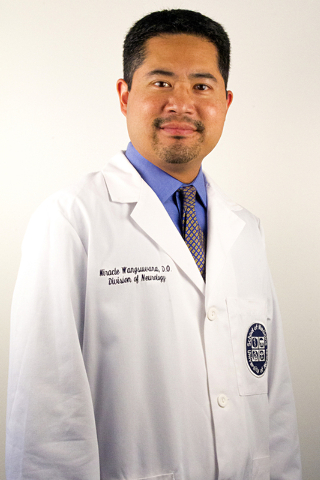 It’s the type of disease that at first is not only baffling to the person experiencing its sudden, involuntary and rapid bodily movements, but also to all those around them. Maybe the head abruptly jerks to one side, the face grimaces, eyes blink uncontrollably or a vocal outburst such as coughing, yelping or shouting may occur for what seems to be no apparent reason.

But these motor and vocal tics do have a sound medical explanation. This abnormal neurological condition is called Tourette’s syndrome, aka Tourette’s disorder, or simply “Tourette’s.” The disorder takes its name from French neurologist Dr. Georges Gilles de la Tourette, who first diagnosed cases in children and adults in 1885.

The medical community doesn’t have a sound handle on what causes Tourette’s. Some physicians believe it may be hereditary or possibly triggered by abnormal behavior of the mother during the first trimester of pregnancy or an infection the child experienced at an early age.

Statistics also vary on how many people have Tourette’s, as opposed to occasional tics children develop, but later grow out of as they mature. Numbers of Tourette’s cases in the United States have been estimated at about 100,000 with other statistics putting it at 3 and as many as 50 actual diagnosed cases per a population of 100,000.

Tics usually begin to develop in children between the ages of 2 and 18, according to the National Tourette Syndrome Association. Males are affected three to four times more than females. In rare instances involuntary vocal tics may be expressed using obscene words in a condition called coprolalia, or with motor tics such as obscene gestures called copropraxia. The great majority of people with Tourette’s, however, do not express either of these conditions.

Tegan Stover was diagnosed with Tourette’s at age 8. She experienced both vocal and motor tics that included coughing, making little whistle noises, twitching her stomach muscles and blinking. When she got older, she started rolling her shoulders and turning her eyes constantly to the left. As with many Tourette’s patients, Stover also developed a comorbid condition — obsessive compulsive disorder or OCD. She had to do a 360-degree circle before going through a doorway.

“I developed an anxiety disorder,” she said. “I was afraid of getting on a very packed school bus. Traveling in a car I felt like getting out and my parents had to make sure the child locks were on.”

Tegan credits her parents, family and close friends with helping her cope with Tourette’s. Her parents always tried to push her out of her comfort zone and nudge her to do things that made her feel uncomfortable.

When they lived on the East Coast, her father, James Stover, remembered one time when they needed to take a ferry across a lake and Tegan’s OCD kicked in to where she said she couldn’t take the trip.

“You have to gently but firmly push,” James Stover said. “I told her we were not going to drive around the lake for an hour and a half. You are just going to have to deal with this. She didn’t like it, but she did it.”

James and his wife, Joanne, always told their daughter to try to keep focused and not use her Tourette’s as an excuse to feel sorry for herself.

“We told her when you deal with people to be upfront with them and tell them you have Tourette’s,” James Stover said. As a family, the Stovers also worked with Tegan’s teachers to help educate them and other students about Tourette’s.

To help ease the frequency of her tics, Tegan took medication in elementary and middle school, but decided to stop toward the end of high school. In college she said she just “toughed it out” and didn’t take any medication. In her senior year at college she took advantage of counseling and psychological services to deal with her Tourette’s and OCD.

As the National Tourette Syndrome Association points out, most people with Tourette’s go on to lead productive and successful lives. Tegan, now 25, works as a research associate with a large Southern Nevada trade organization. She decided to go on medication again, combining this with professional therapy.

“The best advice I can give is to gather a support system of family and friends,” Tegan said. “Breathing exercises and medication will help. … Try to educate people about Tourette’s and that only a small percentage of people with Tourette’s have coprolalia. Tourette’s is not the swearing disease.”

Dr. Mayur Pandya, a psychiatrist with the Cleveland Clinic, said statistics show that one-third of people with tics (not Tourette’s) and those diagnosed with Tourette’s will grow out of it when they reach their 20s, another one-third will continue to have the condition but will be able to stabilize it and one-third will have Tourette’s for life. He also said a subset of patients will develop coexisting behavior conditions such as attention deficit hyperactivity disorder and OCD, which should be addressed with professional help of neurologists and psychiatrists.

With regards to youngsters and teenagers with Tourette’s, Pandya said it’s important for parents to discuss their child’s conditions with teachers and guidance counselors so, if needed, individual educational plans and special arrangements can be developed. It’s also important that fellow students are educated about Tourette’s so they understand why their classmate is exhibiting what they see as strange behavior.

“The initial thought (of the parent) is that your child has a significant disorder,” Pandya said. “Parents must understand that this is a nonlinear course. We know with time the tics and problems can go away. … Most people go on to live productive and fulfilling lives.”

Dr. Miracle Wangsuwana, a neurologist with the University of Nevada School of Medicine, said Tourette’s is a challenging condition and it’s especially important that children get the right help from a pediatric neurologist to treat the tics and a child psychologist to treat OCD and ADHD if these conditions coexist.

“You, the parent, need to tell your child that it is not their fault,” Wangsuwana said. “Educate the child as best you can. And be very supportive.”

Gail Reiner, a nurse practitioner and research coordinator with the Pediatric Neurology Rady Children’s Hospital in San Diego, said many parents make the mistake of telling their child to just stop when they start to tic. What triggers the tic is stress and this only adds to the stress level.

Reiner, along with her team that includes a pediatric neurologist and a child psychologist, approach treating Tourette’s and any coexisting medical conditions through education, medications if necessary and a coaching element taught to the child and parents called comprehensive behavioral intervention for tics, or simply CBIT.

With CBIT a child is taught to do a “competing response” when the urge of a tic is being felt. This response must be natural and capable of being performed for at least 90 seconds. CBIT responses are individually developed for a child through an 11-session program at Rady Children’s Hospital.

Examples of competing responses would be developing breathing techniques where a patient learns to control his or her diaphragm, holding the tongue against the roof of the mouth or holding one’s breath for a period of time.

“This involves learning and behavioral change on the part of the patient,” Reiner said. “If a patient has OCD, this may actually help because their compulsive nature can reinforce practicing the competing response.”

Reiner advises parents that just because their child has a tic doesn’t mean the youngster has Tourette’s. She said if you went to a school and lined up 100 students, probably 25 would have some sort of tic that they will eventually grow out of as they mature. At Rady, she said, they don’t make a diagnosis of Tourette’s for up to two years of observing vocal and or motor tics.

“My goal is to help you enjoy life,” Reiner said. “The two predicators of success, we tell all our patients, is modification and practice. … We also teach people to play as a family because this is very important, too.”

Dr. Jennifer Friedman, a neurologist who works with Reiner at Rady Children’s Hospital, said tics are common in children and many times they will go away. Her procedure with new patients is to work up a history to see if symptoms are Tourette’s, identify comorbid medical conditions and to do a physical examination.

“It’s important to educate others around the child,” Friedman said. “This goes a long way to not having the child suffer. … If a child has a good support system and good self-esteem, they should do well.”