RJ App
Vegas News, Alerts, ePaper
OPEN
To know when to water succulents, you must learn how to tell when hydrostatic pressure is low. Your clues are both tactile and visual. (Mat Luschek / Review-Journal)
By MAUREEN GILMER TRIBUNE NEWS SERVICE
May 9, 2015 - 5:00 am 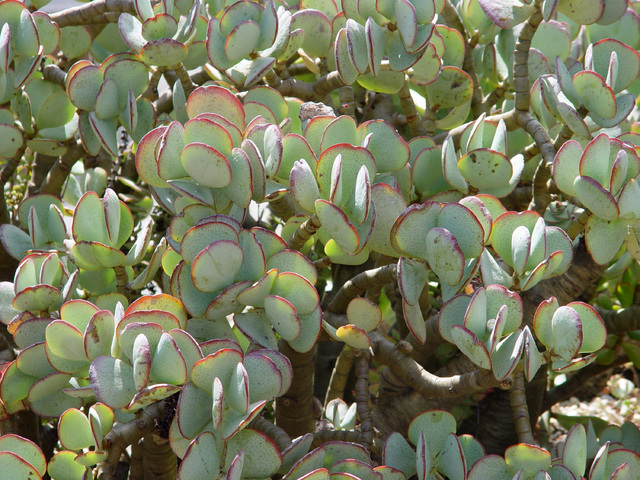 Tribune News Service Succulents with a large surface area often show their dehydration with fine wrinkles of the skin, and they become soft to the touch. 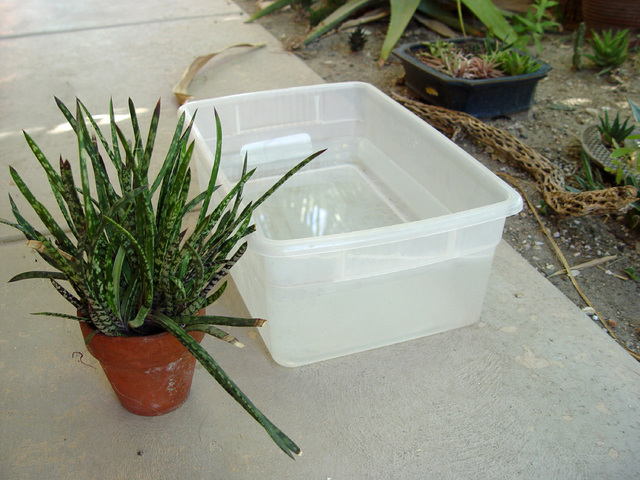 Tribune News Service Because succulents most often rot at the soil line due to surface water applications, keep a large plastic box for watering your collection from the bottom up.

A mother can glance at her child and instantly see subtle signs of distress. A dog owner also knows when the animal isn’t its usual self. Even a mechanic listening to his engine can pick up the slightest sounds that don’t belong. This demonstrates why intimacy lies at the root of how not to kill your succulents with kindness.

For everyone who loves that great succulent look, or if drought has led you to these plants, you may already have had trouble growing them. The cause of death is overwatering, after which rot sets in, and the plants literally melt down into a gushy rotten mess. The problem is knowing when they want water and when they don’t.

For you to understand the “when-to- water” question, you need to know how succulents are different from ordinary plants. The chief characteristic is specialized cells that hold moisture ready rather than deriving new moisture daily from the soil.

After they are watered, succulents take up moisture until every succulent cell is fully hydrated. Over time, they utilize this stored moisture, gradually reducing the hydrostatic pressure inside the cells and tissues within the plant. In between water applications, the roots prefer a dry, airy soil, which is why they are typically grown in porous potting soils for cactus and succulents.

Problems arise in wetter or more humid climates when soils don’t dry out in between water applications. They also occur when the drain hole in a pot becomes blocked or if it was too small to begin with. Pots designed for succulents often have numerous holes for this reason.

To know when to water them, you must learn how to tell when hydrostatic pressure is low. Your clues are both tactile and visual.

When your newly watered succulent is fully hydrated, it’s in the “hard body” stage. Squeeze it gently to get a feel for how hard the individual plant becomes, and let this serve as a basis for future comparison.

When the internal moisture is used up, the whole plant will gradually soften due to loss of pressure. They actually yield to your touch. Beware of those with only some parts softening, as this can indicate invisible rot is spreading into healthy tissue.

Every succulent plant when fully hydrated will stand up to its full height and form, which combine to create attitude. Many alter their overall attitude when internal pressure drops low enough.

For example, Pachypodium’s long thin stalk will literally fold in half, then once watered, it straightens right back up again as hydrostatic pressure returns. Others will show slight wrinkles on the skin caused by reduced interior tissue volume. Drooping leaves, sagging tips or subtle leaning are all changes of attitude caused by low internal moisture.

In my experience, there are a lot of problems caused when succulents are watered from the top down like ordinary potted plants. Water travels down the edges of the soil mass and out the bottom, leaving too little behind for adequate uptake. Succulents often rot right at the soil line due to this kind of watering.

For easily handled pots, simply set them in a pan of water so the soil inside can wick up the water through the drain hole. When the moisture wicks up to the surface of the soil, take the pot out of the water and let it drain. This method ensures that the entire soil mass, not just the edges are fully moistened.

The notion that cactus and succulents need little or no water has caused many deaths by dehydration. Others die when we treat them like traditional plants that depend on perpetual soil moisture.

Always remember that most of them originate in habitats with occasional heavy rain events followed by extended periods of drought. Fortunately they speak to us in the silent language of touch and appearance, which tell you clearly when they’re dry enough for a drink.

Maureen Gilmer is an author, horticulturist and landscape designer. Learn more at www.MoPlants.com. Contact her at mogilmer@yahoo.com or P.O. Box 891, Morongo Valley, CA 92256.