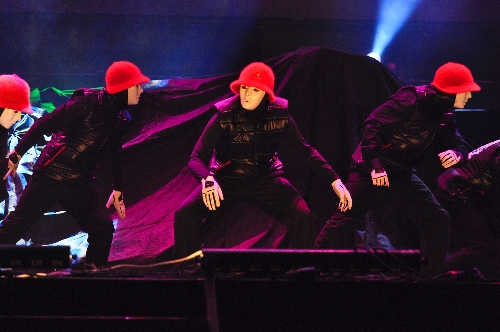 The masked break dancers known as Jabbawockeez, who already have demonstrated a magical ability to pull in younger show-goers on the Strip, will succeed Lance Burton at the Monte Carlo starting Oct. 7.

MGM Resorts wasted no time in announcing the new production show Tuesday, three days after Burton closed at the 1,200-seat theater he helped design 14 years ago.

The Jabbawockeez production show "MUS.I.C." has been the year’s breakout hit since it sold out a limited engagement at the MGM Grand’s Hollywood Theatre in May. It has been rebooked there several weeks since, fueling speculation it would replace Burton after the magician closed Saturday.

"Vegas was always in our minds, but we were just like these little kids dreaming," says executive producer Fred Nguyen, who has guided the seven-man troupe on its two-year path to develop a full-length show.

The hip-hop dance crew is known for signature masks and gloves that conceal the individual identities of the performers. The troupe first came to national prominence when it won the first season of "Randy Jackson Presents America’s Best Dance Crew" on MTV.

Nguyen credits the daughters of two MGM Resorts executives — Felix Rappaport and James Trudeau — for talking up Jabbawockeez to their fathers after watching them on MTV.

"Not a lot of people understood who we are and what we did. No one really got it," Nguyen says. "We just kind of had to prove ourselves. Felix and his daughter, being a big fan, really vouched for us."

Nguyen says Boston promoter Bill Blumenreich, who produces Monte Carlo roommate comedian Frank Caliendo, will assist in the logistics of promoting the show, which will open with five performances per week.

"MUS.I.C." is directed by Napoleon and Tabitha D’Umo, the husband-and-wife team of University of Nevada, Las Vegas graduates who gained TV fame choreographing routines on Fox’s "So You Think You Can Dance."

Nguyen says the troupe tested its ability to perform outside of nightclubs with a 30-minute set it created to open for a New Kids On The Block reunion tour.

The full-length "MUS.I.C." proved the rare title to sell show tickets to the much-sought club demographic on the Strip, where nightclubs actually serve as indirect competition to most formal entertainment.

"We set such a high level of energy that (fans) think of us as a pre-party before they go out clubbing or out partying," Nguyen says. "I think the liquor sales at our shows were pretty measurable at the surrounding clubs and bars after people left the theater."

The Monte Carlo is creating a lounge area in front of the theater to pull the post-show crowd, Nguyen says.