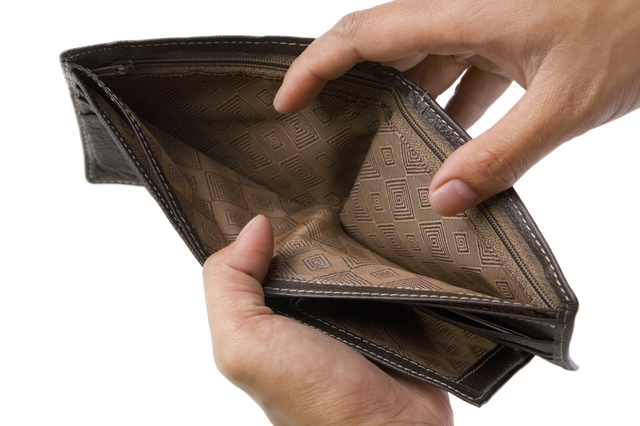 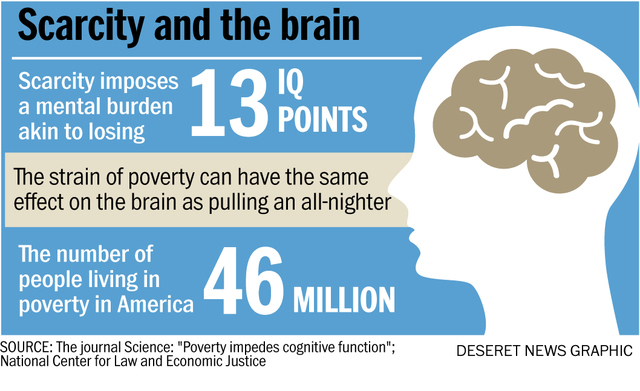 During World War II, when thousands were starving in Europe, University of Minnesota researchers were trying to learn how to safely help them recover. So they undertook a study in which 36 healthy young men volunteered to starve themselves for research.

During the six months of semi-starvation, the men were fed only two small meals a day. The volunteers began to show disturbing effects of hunger like muscle atrophy and distended stomachs, but the scarcity of food also began to ravage their minds. The men dreamed and fantasized about food, read and talked about food, and savored the little food they were given. In the absence of food, it was all they could think about.

“Food became the one central and only thing, really, in one’s life,” recalled one participant.

The study, known as the Minnesota Starvation Experiment, is interesting to someone like Eldar Shafir, a Princeton psychologist and professor of public affairs who researches the effects of poverty, because it’s an example of what happens to the brain when dealing with scarcity.

When a person lacks something important — food, time, money, or even friendship — the scarcity can overwhelm the brain in a way that leads to counterproductive, often damaging decisions, says Shafir.

Qualities often associated with character, things like impulsive behavior, poor financial choices and short-term thinking, may be the products of feelings of intense or prolonged scarcity.

“Like a computer running multiple programs, our mental processors begin to slow down,” says Shafir. “If I made you poor tomorrow, you’d probably start behaving in many of the ways that we associate with the poor.”

A Harvard study from last year showed that the grating effects of poverty can create the equivalent effect of pulling an all-nighter every night, and drop IQ by as much as 13 points.

But Shafir, co-author of “Scarcity: Why having too little means so much,” is interested in how everyone can fall into scarcity traps, not just the poor. For example, he points to a study about the behavior of lonely people who are trying to make friends.

“When you’re experiencing scarcity, your mind focuses on whatever it lacks,” he says. If you’re lonely and want to make someone interested in you, the last thing you should think about is, “I want this person to like me.” But lonely people can’t help but focus on that, and it makes them uninteresting to talk to, so it backfires.

The same thing happens to most of us when we are feeling busy and strapped for time. When you’re in a time crunch or on a deadline, it’s easy to let bills slip or forget about a meeting, or other mistakes that are costly in the long run, says Shafir.

Thinking about the way the scarcity mindset affects everyone can help us better understand the behaviors that might seem irresponsible, like using payday loans.

Expensive payday loans charge up to 400 or 500 percent interest, and the average borrower will conduct nine transactions a year, according to the Center for Responsible Lending.

It seems like a no-brainer to avoid such exorbitant fees, so Jiaying Zhao, one of Shaifir’s graduate students, conducted a stress test with Princeton undergrads — elite students who should, arguably, be counted on to make smart choices under pressure.

Students played a “Family Fued”-like computer game and were randomly assigned into groups that that had a “rich” amount of time to answer questions — 50 seconds — and a “poor” amount of time — 15 seconds. The catch was that half of the participants were given the option to borrow time, but every second they borrowed cost them an expensive 2 seconds from their total bucket of time for the game.

The result? People rich in time rarely borrowed time and performed well. But the time-poor grabbed desperately at time loans and ended up making less than the time-poor that didn’t have the borrowing option.

“These students made the same mistakes we observe among poor people,” said Shafir.

So what happens when a society, not just an individual, undergoes a long bout of scarcity? Can a society suffer “scarcity mindset”?

Caroline Roux, a professor of marketing at Concordia University who studies consumerism and researches scarcity, has been following that trend in the post-recession United States.

“We’re living in a time in which there’s a pervasive feeling of not having enough,” Roux says, citing wage stagnation, slow job growth and the threat of job automation.

When people sense resource scarcity, their response is often put their own needs first. This can curb pro-social behavior, says Roux, or behavior that’s good for the whole.

For example, since the recession, the rich have benefited most from the recovery — but it’s the poor who have increased charitable giving during that time, while higher-income people have given less, according to the Chronicle of Philanthropy.

Using IRS data, the Chronicle found that between 2006 and 2012, the lowest-income Americans bumped up the share of their incomes that they gave to charity, but as they went up the income ladder, the charitable giving grew smaller and smaller.

In 2011, the wealthiest Americans with earnings in the top 20 percent gave an average 1.3 percent of their income to charity, while the bottom 20 percent gave 3.2 percent.

This may be because the poor better empathize with people in their same situation, says Roux. But it might also be a form of “selfish” behavior in that by giving to others, poor people might think that they might also get a hand up when they need it.

“When we are running out of resources is when we really need to band together,” says Roux.

Shafir and his co-authors theorize that a large number of Americans are struggling financially and therefore losing cognitive “bandwidth.” It’s possible that since the 2008 financial crisis, America may have lost some of the “fluid intelligence” that the Princeton students suffered when placed in a crisis situation.

There are ways to buy some bandwidth for people who are struggling, says Shafir, and help make life more “scarcity proof.”

For example, it wouldn’t make sense to charge people hundreds of dollars to sign up for food stamps, but that’s essentially what we do when we give them time-consuming paperwork and ask them to miss work three days in a row sitting in a benefits office. The “time tax” can be as sapping as taking money.

Bandwidth “gifts” like the EITC tax return benefit also give people a reprieve from the strain of poverty.

“Poverty is different from other kinds of scarcity,” Shafir says, pointing out that if he experiences time scarcity and pushes out a deadline, there’s usually no serious consequence. “But if you can’t pay rent, really bad things happen.”He compares managing scarcity to putting out fires with buckets of water; when there’s a fire, you don’t ask how much the bucket costs, you just pour on water. “We need buckets that people can afford,” he says.