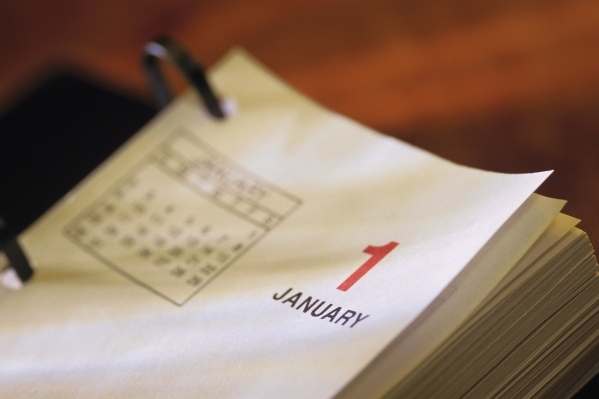 We make them. We try valiantly to accomplish them. And, ultimately, we fail.

Most of the time, anyway. But part of the problem could lie in how we approach our annual New Year’s resolutions. In fact, making a few changes in how we think about them can help to avoid the pitfalls that always seem to lie in wait.

Pitfall No. 1: The term you’re using to describe those hoped-for positive changes in your life.

Chris Doss, a licensed clinical social worker at the Community Counseling Center of Southern Nevada, isn’t a fan of the word “resolution” at all. Instead, he suggests using another word to describe your annual attempts at self-improvement.

“I kind of like the word ‘goal’ better, because a goal is more flexible,” Doss says. “A resolution is more like, ‘I’m gonna change right now.’ A goal is, ‘I have time to get this accomplished.’ “

Removing the pressure to make immediate, wholesale changes in your life all at once can help increase your chances of success. So, Doss says, think of what you’re doing as “setting goals instead of (making) resolutions, and be a little more flexible.”

Pitfall No. 2: Making your goals too unrealistic to achieve.

“For example, a lot of people want to stop smoking or lose weight, so, ‘I’ll lose 100 pounds in six months.’ That’s not realistic,” Doss says.

The risk here is that failing to achieve even an unrealistic goal may discourage you from even attempting to continue at all and sink your self-improvement plan.

Breaking a larger goal into smaller, achievable pieces will offer a satisfying sense of accomplishment along the way and reduce the chance of failure.

Pitfall No. 3: Not rewarding yourself.

Losing weight, kicking a smoking habit and the other difficult lifestyle changes that tend to be the focus of our New Year’s goal-setting efforts can be a real slog if we don’t reward ourselves once in a while. So, Doss says, set up small rewards for yourself at designated points along your self-improvement journey.

“So if I lose 10 pounds, I won’t go to the gym today, if you hate the gym,” he says. Or, if you’re trying to lose weight, reward yourself with a piece — but only a single piece — of candy every 10 pounds.

The reward represents not just an incentive to hit your goals along the way, but help, just by themselves, to offer encouragement to forge on to the next goal.

Pitfall No. 4: Not forgiving yourself for the occasional slip-up.

“If we set for ourselves goals or resolutions that are too big, we set ourselves up to fail. And once we fail, (it’s) ‘Forget it. I’m done. I’ll never do this again’ ” Doss says.

A better approach is to acknowledge to yourself that setbacks will occur and that it’s still worth it to soldier on after a setback.

“You’re going to slip up and that’s part of life. So don’t beat yourself up because I didn’t put the $10 away for my savings this week. It’s OK.”