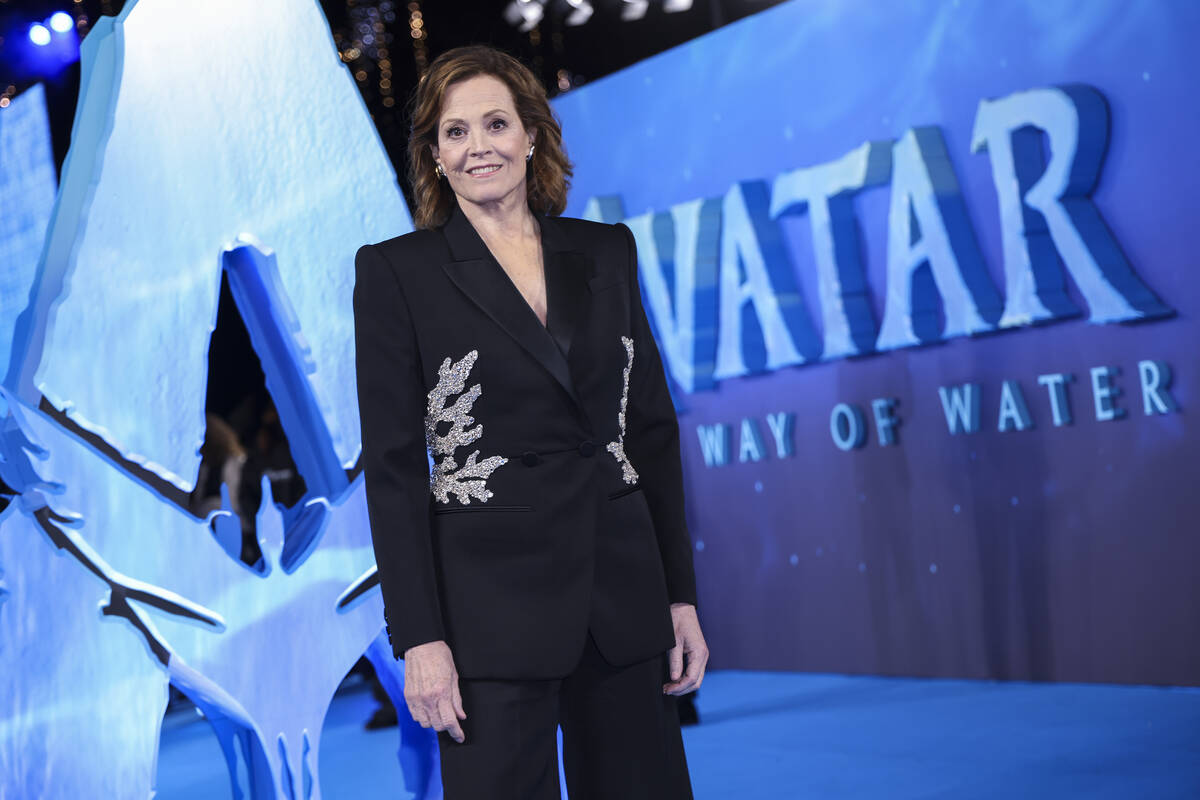 Sigourney Weaver poses for photographers upon arrival at the World premiere of the film 'Avatar: The Way of Water' in London, Tuesday, Dec. 6, 2022. (Photo by Vianney Le Caer/Invision/AP)

Growing up, different wasn’t accepted. “I was 5-foot-10 by age 11 and felt like a giant spider,” Sigourney Weaver recalls.

“I was so self-conscious, so vulnerable,” she continues. “My sense of injustice in the world was keen. I didn’t want to be different, but I turned it around on everyone. I became the class clown. I wanted them to laugh with me — not at me.”

And now, all these years later, it’s time for a bit of closure.

The screen icon, known for playing the fearless Ripley in the “Alien” franchise, has revisited those old wounds and tender feelings. She brings them to the big screen as a 14-year-old girl in “Avatar: The Way of Water,” opening Dec. 16.

The role was created specifically for the 73-year-old Weaver by her “Aliens” director James Cameron, who also helms the much-awaited return of the “Avatar” franchise.

“I didn’t want to be 14 again because I had to go back and tap into feeling like the outsider,” Weaver says of playing a character named Kiri. “In the end, it’s quite beautiful to remember what you survived in life.”

“Avatar: The Way of Water” returns to the world of Pandora, 10-plus years after the events of the first “Avatar” film, released in 2009. The Sully family (Jake, Neytiri and their children) must battle to stay alive. Weaver stars alongside Sam Worthington, Zoe Saldana, Stephen Lang and Kate Winslet.

Weaver, a three-time Oscar nominee, has had a celebrated career, starring in screen classics including “Gorillas in the Mist,” “Ghostbusters,” “The Ice Storm” and “Working Girl.”

On a Zoom call ahead of the “Way of Water” premiere, Weaver agrees that it has been a very good life and shares some advice:

— There’s always a comeback: Weaver’s character in the first “Avatar” died, but Cameron said, “I knew I had to find a way to bring Sig back.” They began talking about the sequel in 2010, deciding Weaver would come back as a teenager. “I was excited, terrified and thrilled to play a real adolescent who isn’t an alpha or a warrior. She has to learn about her powers while asking ‘Who am I?’ All of us ask that of ourselves at different ages.” Weaver didn’t just tap into her own past; she went into high schools to study teens. “I wanted to hear the pitch of their voices and ended up learning there is a big range of emotions between 12 and 15. After I spent time in a school, I thought, ‘OK, I can let her out.’ ”

— Challenge yourself: Weaver learned to hold her breath for almost seven minutes for the new “Avatar” film’s water scenes. “We had a brilliant teacher who teaches the Navy SEALs. During pre-production, I got certified for scuba and then began free diving,” she says. “I felt so comfortable and free in the tanks, but it was all thanks to my training.” An added benefit: “My husband is from Hawaii and we love to go into the ocean. I’m a much more confident swimmer now.”

— Be you: She was born Susan Alexandra Weaver. “I was reading ‘The Great Gatsby,’ where the name Sigourney was mentioned once,” she recalls. “The name kept my initials, and I loved how it was so long. I thought, ‘I’m going to change my name until I can figure out who I am, and it just kind of stuck.” Weaver admits, “It felt like a drastic change, but sometimes that’s good. And my father’s real name was Sylvester, but everyone called him Pat. My mother is Desiree, and everyone called her Liz.”

— Overcome obstacles: “I never thought I could be an actor because I was terribly shy,” Weaver says. “I didn’t have the courage to say ‘I want to be an actor’ until I was 23.” What turned the tide? “I had such a good education, which was a huge gift. I just had to learn the confidence, which often comes with age,” she adds. “It’s OK to be a late bloomer. A lot of actors feel that way.”

— Go with the flow: “I believe in taking what comes in life. Life is unpredictable. All I can do is go in and try to make the circumstances the best that they can be,” she says. “And finally, you have to remember that it’s OK to make mistakes.”

— Sisterhood is powerful: “Women take care of each other. They’re there for each other and root for each other,” she says. “My female friends are so important in my life.”

— Cry it out: “I can’t watch a movie about family without getting tears in my eyes,” Weaver admits. “I’m very sentimental. When she was little, my daughter would watch movies with me and say, ‘Really, Mom? Are you crying?’ I think it’s a great catharsis to cry at a movie, although supposedly it’s against type for me. I know — I’m Ripley; I’m not supposed to be crying.”

— Take the compliment: Fans walk up constantly to tell Weaver they’ve seen her movies … about a million times. “I don’t know what to say, but I’m very flattered,” she says.

2
Savvy Senior: What are IRS tax filing requirements for retirees?

3
Toni Says: Medicare Part B is as valuable as gold