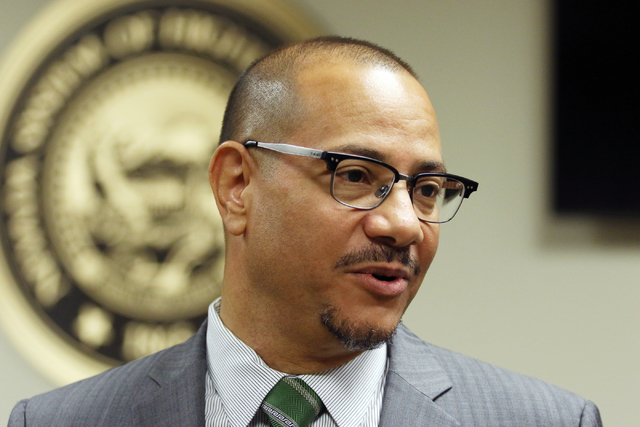 Nevada System of Higher Education Acting Chancellor John White said in a letter late Monday that he is no longer interested in a new contract with the system and that a board dispute prompted his decision.

“I have found it rewarding and interesting to serve as acting chancellor,” White said in the letter, addressed to Board of Regents Chairman Rick Trachok. “I have also come to care deeply about the committed employees in the NSHE System Office and the dedicated leaders of our campuses, both of whom strive to improve student success and to make Nevada a better place.

“All of these factors convinced meto consider some kind of extended service after the search for my successor failed. Despite the failure of the search, it appears that the board members are in disagreement about how to proceed; I do not wish to be caught in the middle of such a dispute.”

White is serving a one-year, $303,000 contract and was likely going to be appointed permanent chancellor at a meeting Tuesday.

White withdraws name from consideration as permanent @NSHE chancellor. Said he doesn't want to be caught in middle of board dispute #nved pic.twitter.com/HtpiSCBahN

“I think we have skipped too many steps to get to (Tuesday’s) meeting,” Carter said in an emailed statement. “I believe that Dr. White is our finalist candidate, but that we should have an open meeting with the ability of either the board or search committee to ask questions, such as his views on the community college system, priorities he thinks the board should consider, and other things for the record. A backroom deal to give him the position is not the way this board should operate. We need to show the citizens of Nevada and the legislature that our actions are discussed and rendered by the entire board. We cannot tolerate autocratic decisions as doctrine of the board.”

White’s proposed contract was sent to the regents on Friday. Carter said he seemed as if it was being pushed at them.

“We’re not following a process,” Carter said. “We’re not being out in the open.”

White was asked several times in the past 10 months whether he would like the job permanently. But he didn’t express interest in the position until five of the top semifinalists dropped out of a national search for the position that commenced in January.

“I am deeply saddened by John White’s withdrawal from consideration as permanent chancellor for the Nevada System of Higher Education,” Trachok said in a statement. “As I’ve stated before, I consider John to be the gold standard when it comes to performing the functions of the chancellor. I can’t speak highly enough about his contributions to NSHE and how much he has done for our students to move our higher education system forward.”