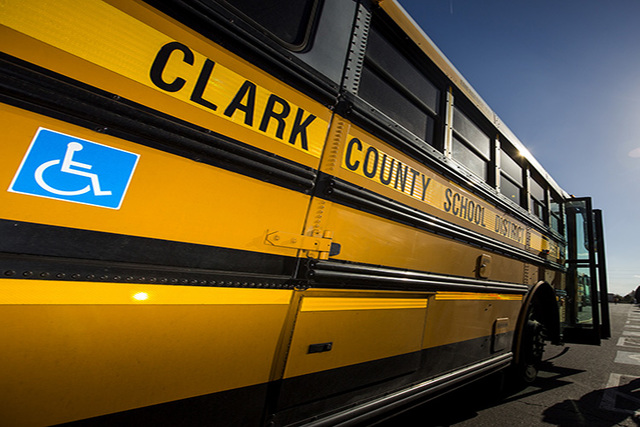 Officials with a Clark County School District support employees union continue to face criticism while they await a state Supreme Court decision on whether the association will be replaced.

The Supreme Court decision is one of three big decisions coming down the line for the Education Support Employee Association during 2017. An updated contract also is being rolled out after an arbitrator made a decision in November, and support employees are grappling with their role in the state-mandated district reorganization.

The uncertainty is causing anxiety for some support employees, who have taken their concerns to the district board of trustees.

“Morale is at an all-time low,” Simone Hall, a support employee, told the board at a recent meeting.

The ESEA is reluctant to give out its membership numbers. But just 35 percent of the more than 12,000 support staff employees had union dues deducted from their paychecks as of October.

The ESEA and the Local Government Employee-Management Relations Board, or EMRB, are awaiting a state Supreme Court decision to see whether that board will be able to move forward on a decision to allow the Teamsters local to take over representing the support employees.

The Supreme Court decision, expected sometime in the spring, will end a 15-year battle between the two unions.

Until 2003, the EMRB allowed a simple majority vote, similar to elections throughout the country, in which the party with the most votes cast in its favor won, said Bruce Snyder, the EMRB commissioner. In 2003, the rule was changed so that the election could only count if one party got a majority of all votes that could have been cast.

“The commissioner at that time recommended it should be a majority of those who could have voted,” as opposed to the majority who did vote, Snyder said.

The EMRB announced its intention to reverse the rule before the most recent vote. Under the simple majority rule, the Teamsters union was poised to take over.

But ESEA lawyers intervened, bringing the issue to the district court, which ruled with the ESEA. The decision was then appealed.

Until the Supreme Court decides, the ESEA is still the union representing, and hammering out contract negotiations for, the support employees.

After hitting a standstill on negotiations when the last contract ended in June 2015, the support employee association and the school district went to a binding arbitration process this spring.

A neutral negotiator made a final and binding decision in early November. The decision includes an increase of two increments on the pay scale, an overall 2.225 percent pay increase to be awarded in two parts and an additional $50 a month to offset an increase health care premium costs.

Support staff have yet to see a copy of their contract as decided by the arbitrator. And that’s by design, said Guillermo Vazquez, the executive director of the union.

“We’re not going to release it because there’s somebody out there trying to use all types of information against us,” Vazquez said, speaking directly about the Teamsters union, calling them the “Teamstealers.”

Once the ESEA and district lawyers are done updating the contract to reflect the arbitrator’s decision, the information will be made available to the public, Vazquez said.

Not releasing the information is dishonest and exactly part of the reason why the Teamsters union wants to represent the support employees, said Grant Davis, vice president of the Teamsters local.

“These people need better representation,” he said. “They’re not being serviced properly.”

As the school district moves forward in the state-mandated reorganization process, support employees are trying to carve out their place in the new structure.

Under a new system, principals and school teams will be given more power over their building through school organizational teams. They’ll craft their own school budget and decide which services they want.

The law also requires 80 percent of the district’s budget to be dedicated to school services in the first year, with the remaining 20 percent left for central offices.

Operational considerations such as maintenance, transportation and food service will still be part of the 20 percent in the central offices.

The district doesn’t anticipate any layoffs with the 80-20 split the first year, but it’s the future that is uncertain.

“It puts a little pressure, if you will, to perform well with less,” Vazquez said.