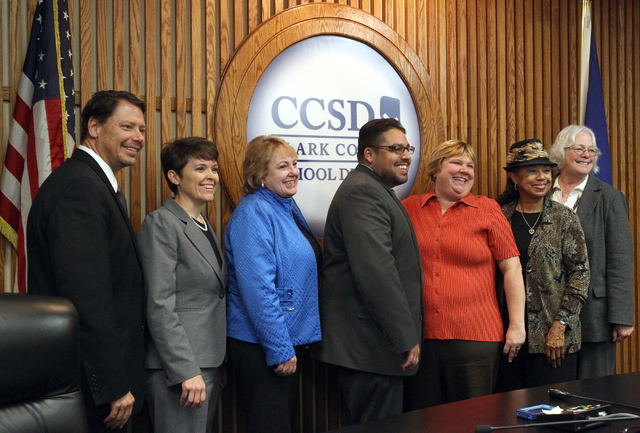 With plans underway for Nevada public schools to receive more state dollars for students living in poverty or who are English language learners, it should come as little surprise that the Clark County School District — which stands to benefit the most ­— put its support in writing for the new funding formula on Thursday.

“That’s unheard of with a change to the funding formula,” she said.

The School Board unanimously approved a resolution Thursday supporting a new formula that must include “weighted funding for those students who face road blocks to learning,” such as those living in poverty, learning English or having special education needs.

In a state of 17 school districts, Clark County serves three-fourths of Nevada’s poor students, 33,000 special education students and 51,000 English language learners, according to the Nevada Department of Education.

About 166,000 Clark County students, or more than half, receive free or reduced lunches because they are low income.

The state currently gives the school district $5,457 per student.

The dollar amount has increased over the 50 years since the creation of Nevada’s funding formula. However, it has remained at a flat rate for all students, despite research showing that poor and English learning students cost more to educate.

“We got a lot of miles out of the formula we had,” but it’s time for an update, said board member Chris Garvey.

At least 35 states provide additional funding for at-risk students considered more likely to struggle in school, according to the Education Commission of the States, a Denver-based consultancy.

The Nevada Task Force on K-12 Public Education was established during the 2013 Legislature to research how Nevada’s 50-year-old funding formula should be updated.

In testimony before the Legislature, officials for Clark County School District made their support for a new funding formula clear. Clark County school leaders also have said more state dollars must be set aside for all public schools by increasing the base amount given for each student.

That was reiterated in Thursday’s resolution to be voted on by Nevada’s other school boards.

“Education has to be a higher priority for funding,” read the resolution, advocating that all funds collected for public schools be used for “that purpose only.”