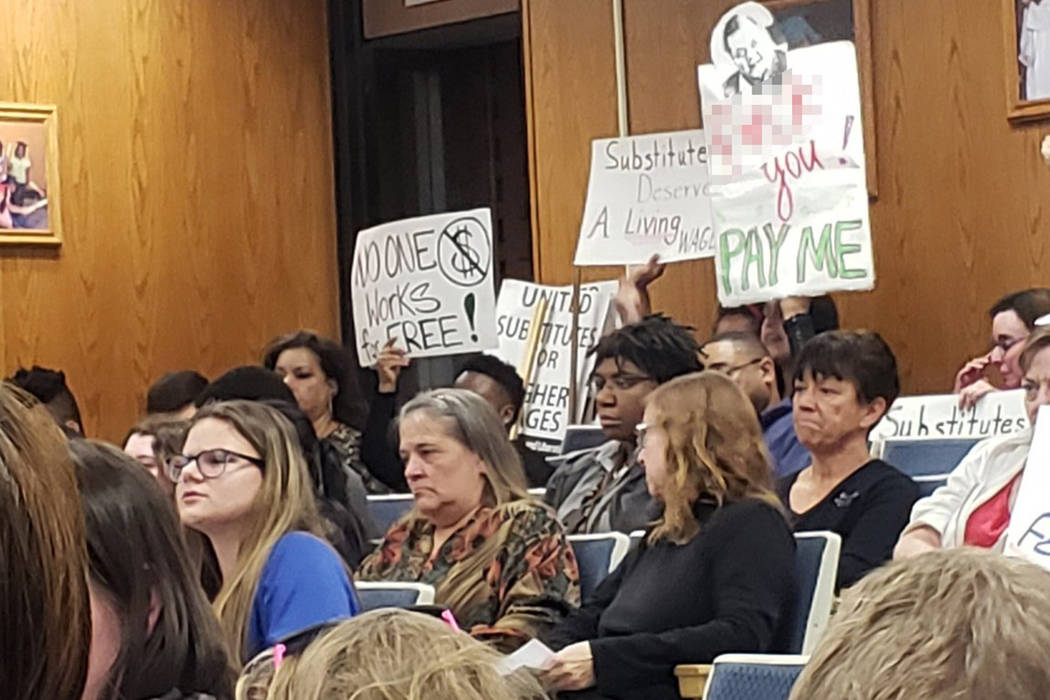 Jamie Gruber, a vacancy substitute teacher, was escorted out of the Clark County School District board meeting Thursday, February 27, 2020, after refusing to put down a sign that contained an expletive and the words “pay me.” (Aleksandra Appleton / Las Vegas Review-Journal)

Approximately 6,400 licensed teachers and 1,450 substitute teachers were shorted pay in January because of issues with the district’s new payroll software, according to a presentation at the meeting.

The update on the $17 million Human Capital Management System included a rundown of the effects on employees since the system was rolled out in early January. Issues were reported for nearly every category of employee, including teachers, administrators, support professionals, substitutes and police.

Though the district has issued five out-of-cycle paychecks to make up for shortages, some teachers and substitutes were still reporting missing pay as of Wednesday’s pay date.

Gruber said she can’t afford her rent and car payments, and she fears not being able to throw a first birthday party for her 11-month-old daughter. “I can budget, believe me. But how can I budget zero dollars?”

She also said district representatives had repeatedly told her to wait until her next paycheck to see resolutions to the shortages.

Gruber was escorted out of the board meeting by CCSD police for refusing to put down a sign that contained an expletive and the words “pay me.”

Approximately a dozen other speakers expressed anger and concern over pay issues during the meeting that saw the board take a brief recess in an effort to calm the crowd.

Other staff not present at the meeting have also reported issues.

Teacher librarian Nichole Beer said she’s missing $950, but she tweeted about her pay primarily to draw attention to the struggles of co-workers who may be unable to absorb such a shortage and haven’t received clear answers from the district.

Substitute Greg Barone said he is missing nearly a full day’s pay, or about $85, and has struggled to get an answer from the district.

Steps to be taken

Trustee Danielle Ford said the district had a responsibility to correct the errors immediately. Other trustees also pushed for a timeline on a fix.

“The end of March is not acceptable,” Trustee Deanna Wright said. “It’s just not.”

Chief Technology Officer Greg Halopoff said the district’s first priority is to correct any base pay issues, with addressing overtime pay a second priority. He added that the district expects to run up to five additional off-cycle payrolls in the near future.

Halopoff said the district did not have a tally of how many people are still affected by pay issues.

The presentation also included a list of steps that the district will take to address issues, including tighter controls over time sheets, more training and expanded user support in the payroll department.

The district also touted several accomplishments that have come about in the wake of the new system, including 97,000 absence and 332,000 time requests processed, as well as having every school budget submitted as of Thursday.

Superintendent Jesus Jara added that he had met with CherryRoad Technology, the company tasked with implementing the new software, to express that the rollout had not been “to the level of my expectations and our expectations.”

Jara said he had planned to meet with NV Energy and Three Square Food Bank for possible relief for employees.

Asked whether the district had calculated how much the errors have cost the district in terms of time and manpower, Jara said the top priority is getting staff paid, and after that the district will tally those numbers in the name of accountability.

Trustee Chris Garvey requested that Jara bring forth an item on the March 26 agenda on the concerns recently raised by substitute teachers, particularly in regards to shortages in schools and the fiscal impacts of prep buyouts, or the practice of paying teachers to teach additional classes on their prep periods.