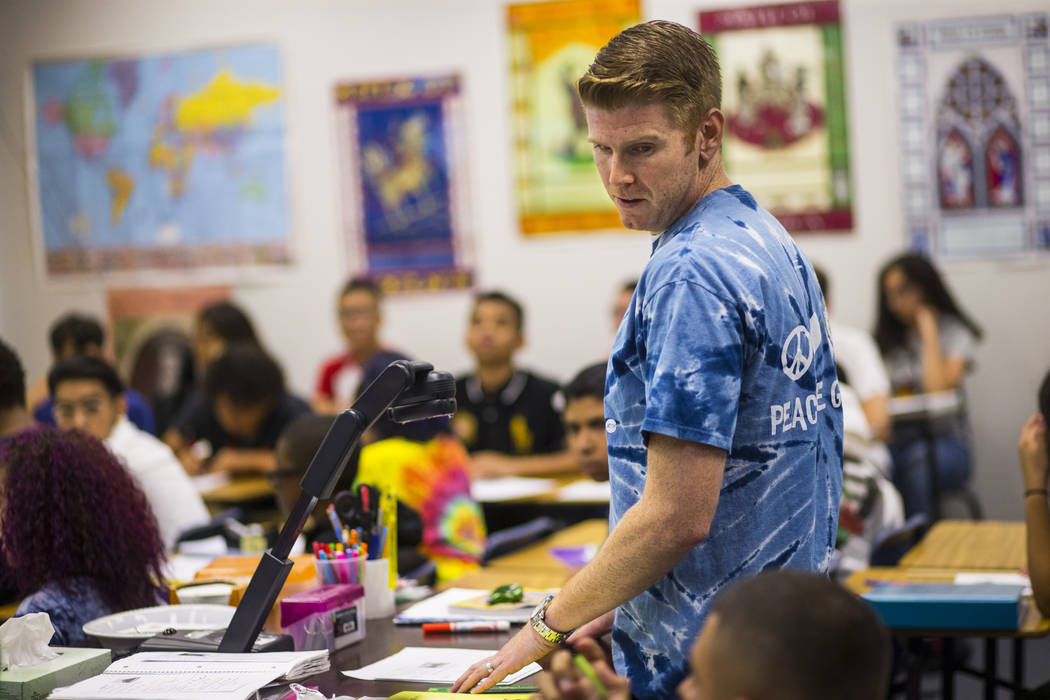 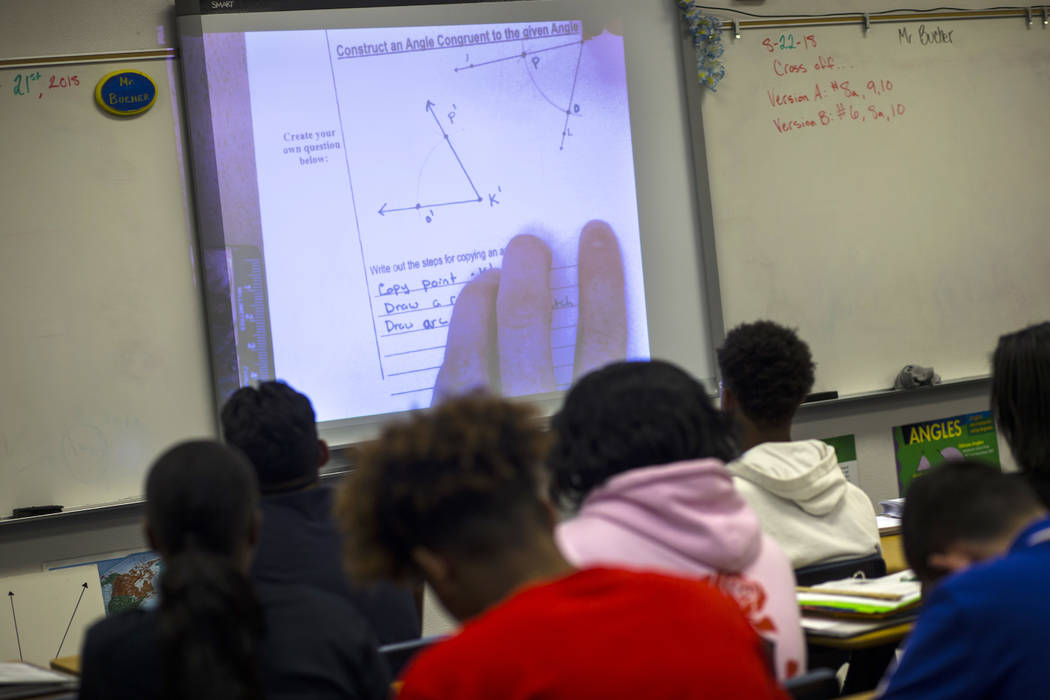 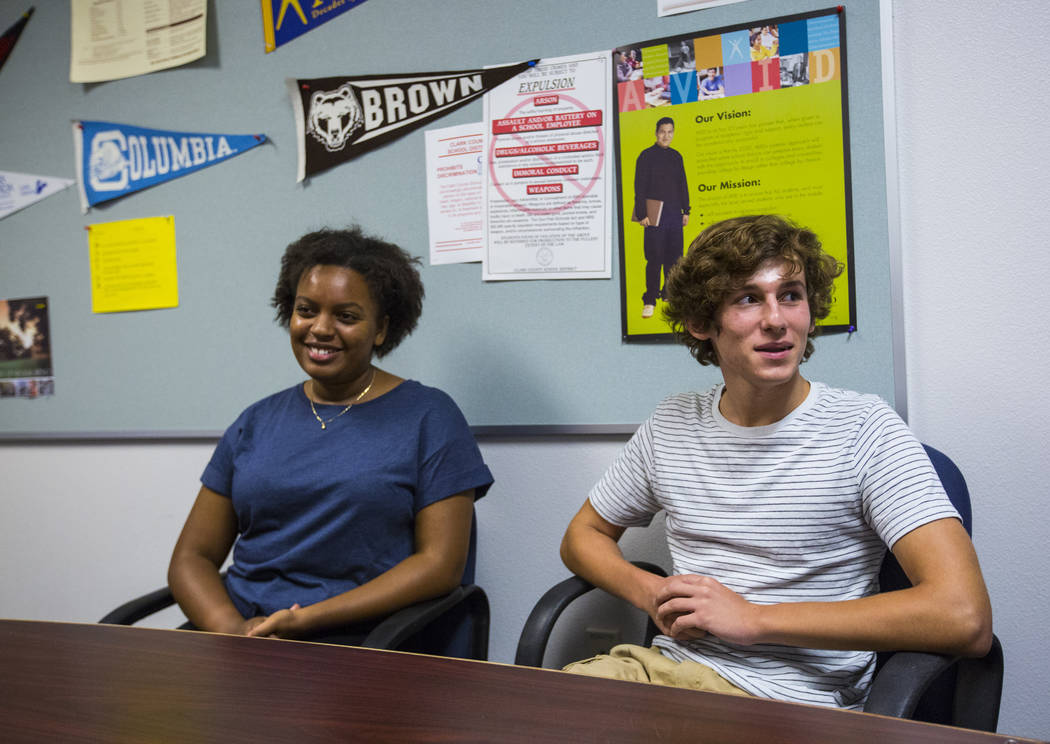 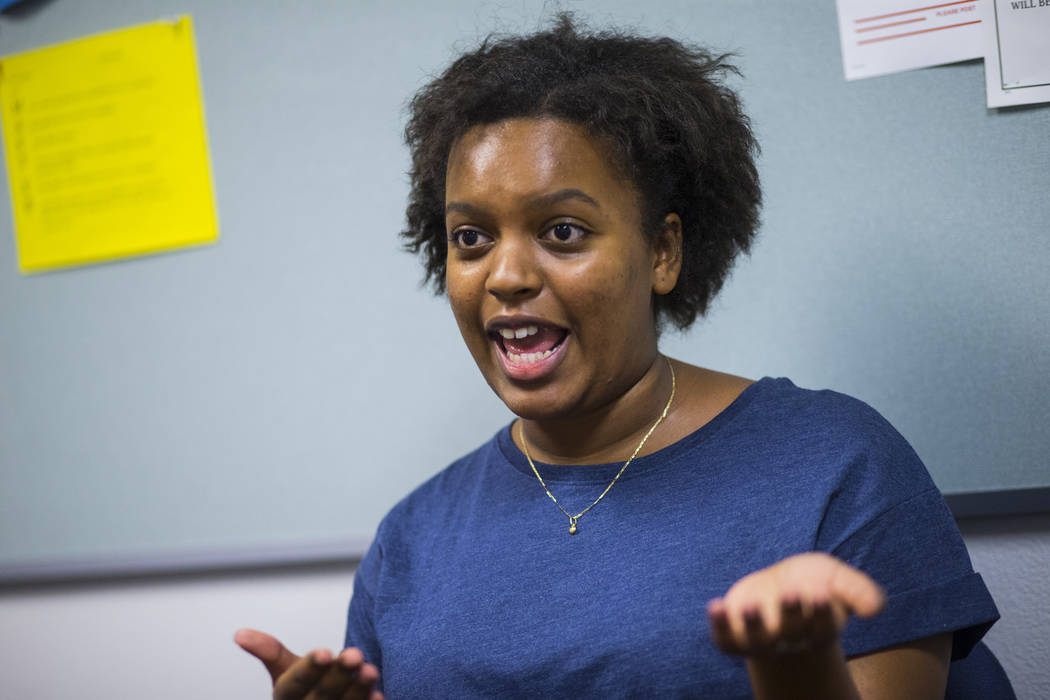 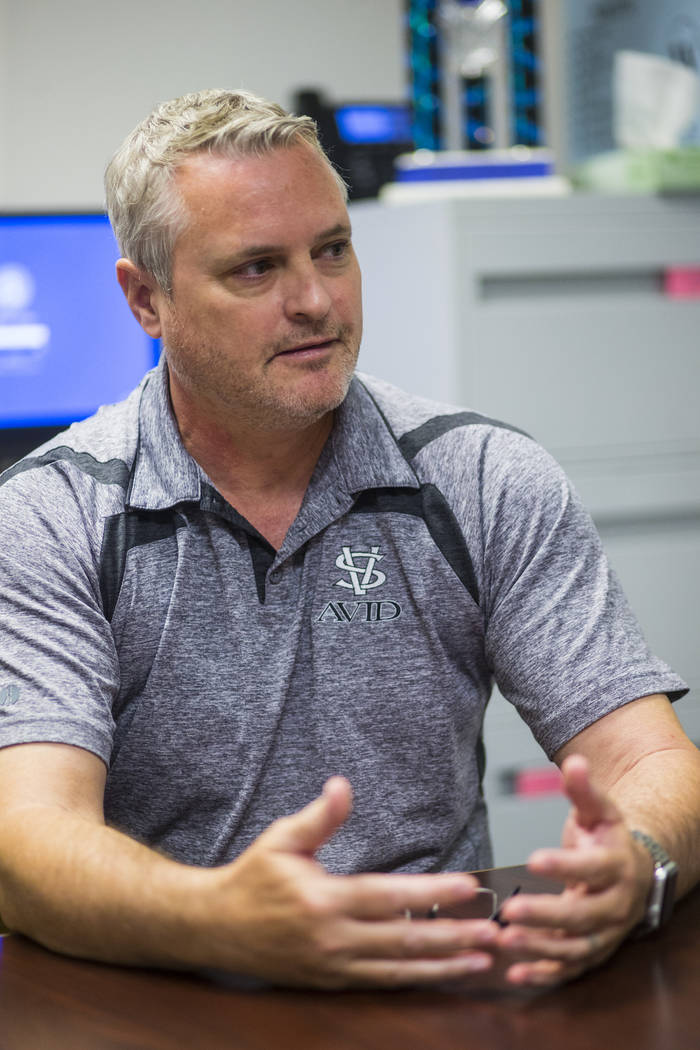 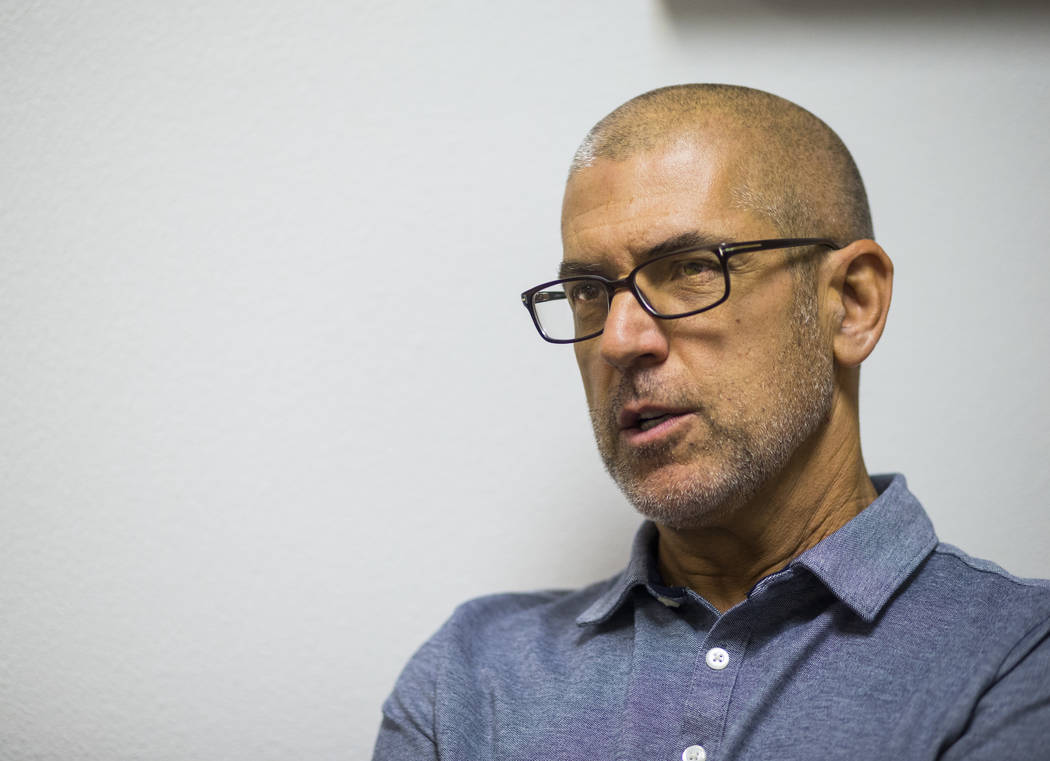 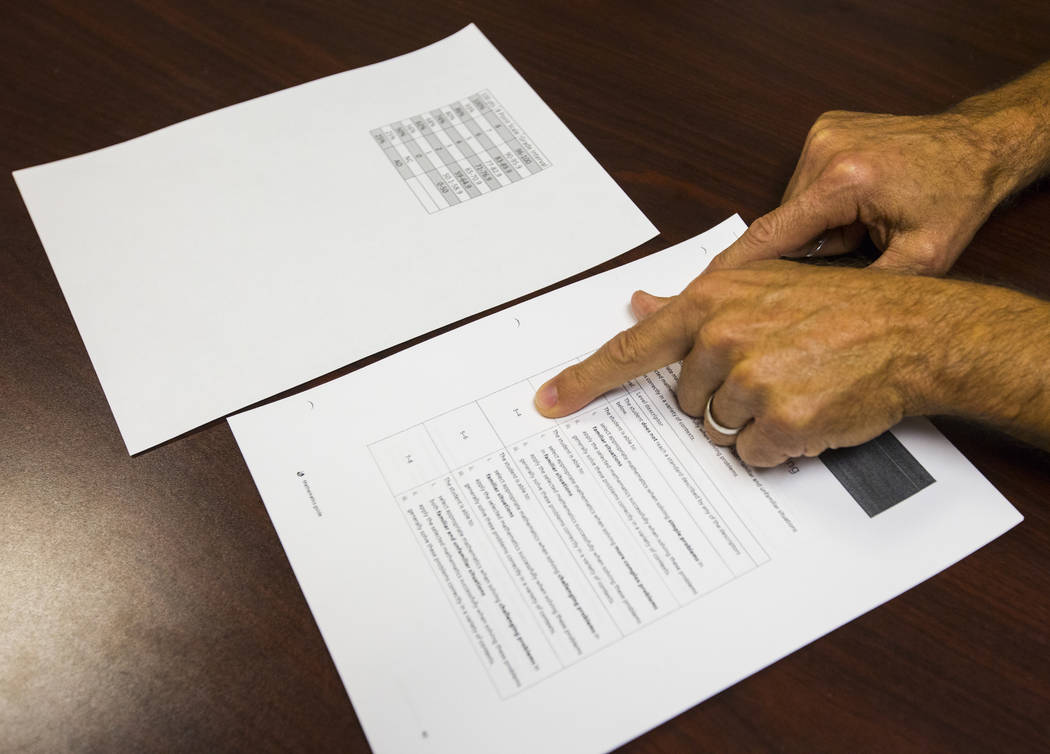 When it comes to academic success or failure, Clark County students aren’t playing on a level field.

At Cimarron-Memorial High School in Las Vegas, a grade of F is worth 50 to 59 points on a 100-point scale.

At Green Valley High in Henderson, failure results in a score anywhere from zero to 59.

And at Spring Valley High in Las Vegas, F equals a zero on the school’s eight-point grading scale, but it ultimately is reset to a 50.

The discrepancies are the result of a Clark County School District policy that gives schools considerable leeway in setting grading policies. Many have taken advantage of that freedom to explore alternative grading schemes.

At least 13 of 48 high schools surveyed by the Review-Journal, for example, have adopted some form of a policy commonly known as “minimum F,” which typically sets the lowest possible score for assignments or cumulative quarter grades at 50. At least three others use a points-based grading system in which letter grades are assigned a number — with an A equaling a four and an F a zero, for example.

The result: A grade of C at Desert Pines High School is not the same as a C at East Career and Technical Academy.

The minimum F concept has been a divisive issue in the district for years and is at the center of a national debate among educators about grading practices and consistency.

Critics, including some teachers, parents and students, argue that the scheme enables students to game the system by figuring out which assignments they can skip and still pass the class. They also say that graduation rates are inflated because students pass classes that they otherwise would fail.

Proponents argue that the traditional 100-point, percentage-based system is overly punitive, giving more weight to an F — from zero to 59 percent — than to passing grades. This can bury students so deep in a hole that they won’t graduate.

“(Do) we really need 59 data points to tell a child how bad they did, and only 40 to tell them how well they did?” said Spring Valley High Principal Tam Larnerd. “You know, an F is an F. It doesn’t matter if it’s a 2 percent or a 58 percent; they still failed.”

The district does not track the grading policies used by its schools. Schools are only required to value semester exams at no greater than 20 percent of the final grade, weigh quarter grades equally and equate letter grades to percentages that correspond to the traditional grading system — under which 90 to 100 percent is an A, for example. Anything below 60 percent is equivalent to failure.

But how schools define failure is up to them.

The Review-Journal survey of high school principals, for example, found that 13 of the 48 have adopted some version of the minimum F policy, while three use a point-based grading scale that ultimately accomplishes the same goal.

Seventeen schools indicated they had not adopted minimum F policies, although they may use other nonstandard grading scales.

Fifteen schools did not respond to repeated emails and phone calls.

Even within the minimum F policy, there is great variation. Some schools may round certain assignments — but not all — up to 50 percent. Others only round quarter grades up to 50 percent. One school, Indian Springs, rounds up to 40 percent.

Some may require students to at least make an effort on an assignment in order to get the minimum F. Others may allow a student to do nothing.

Principals who have embraced the policy argue that a grade of zero demoralizes a student. While A, B and C grades are each weighed equally, F has the greatest weight of all, they note.

“It’s definitely discouraging for a student who fails, let’s say, the first quarter and has an average of a 37 percent or a 22 percent,” said Cimarron-Memorial Principal Lori Lawson-Sarabyn, who has embraced the minimum F policy.

But critics say students game the system, figuring out the lowest possible score they need to get on an assignment or exam in order to pass.

Karlana Kulseth, a teacher at Nevada Learning Academy, which adopted the minimum F policy, argues that in the real world you wouldn’t expect a full paycheck for doing half your work.

“If you’re giving them 50 percent on grades right now, which basically is their job … then we’re teaching them to expect life to be that way as well,” she said.

And some teachers say they understand the philosophy behind the alternative grading schemes but note that they will always work with students who are working to boost their grade.

“If I had a kid that bombed first quarter, did nothing, and then all of a sudden started working second quarter — yeah, I can mess up that math real easily,” said Megan Thomas, a teacher at Nevada Learning Academy, meaning she might adjust a grade upward for such a student. “… I will make sure that I crunch that so if mathematically you ended up with a 58 percent, you’re ending up with a 60.”

Joyce O’Day was tired of seeing her students at Western High School, which has a minimum F policy, not even try.

O’Day, now retired, said it was considered cool not to do schoolwork, and students made fun of those who did.

So she abandoned the school’s minimum F policy, with permission from her principal, in 2015-16 and created her own grading system in her five world history classes, beginning in the third quarter.

“It got them motivated,” she said. “I saw a substantial, in my opinion, increase in grades by making them work for it.”

Other schools across the district have similarly restructured grading systems to ensure they don’t encourage laziness.

When West Prep gave a minimum of 50 for each assignment two years ago, teachers were frustrated because they felt that students were working the system, said Principal Danny Eichelberger.

To change that, this year the school is only rounding up quarter grades to a 50. Also, students will still see their original grade to give them perspective on how much they really need to improve.

“The idea would be to ramp them up so that they don’t start floating or coasting through individual assignments,” Eichelberger said.

Meanwhile, Spring Valley, Rancho and Mojave have adopted a point-based grading system that translates letter grades into numbers ranging from 1 to 4 or 1 to 8.

The way those policies are implemented can also vary, but they ultimately adopt the same philosophy as minimum F, giving more equal weight to all grades.

“Some people have said, ‘Oh, that’s why so many more kids are graduating.’ Well maybe these kids should’ve been graduating all along,” he said. “They were the victims of toxic grading practices in the past that no longer exist at least here at Spring Valley — and yeah, kids are being more successful. What’s wrong with that?”

Though the school does not have a uniform minimum F policy, Ophir said, some individual teachers set a minimum 50 percent on grades that are worth more.

“For someone to not do anything and still get a grade put into the grade book … it doesn’t hurt me,” she said. “But it kind of makes me look at the other people and (think), ‘Well, should I be working as hard to get a grade?’”

But Bonanza High junior Vivian DeLeon said minimum grading can help students who are experiencing hardships and can’t turn homework in on time.

“I think it does help the fact that minimum F is an option and it’s there,” she said. “But I also don’t feel like we should depend on it, because at the same time that’s kind of where bad habits start to grow.”

The students agree that schools should be free to make their own grading decisions based on student demographics.

She said she understands the argument of giving students hope when their grades are so low that they can’t be saved.

“But by the same token, if they’re not doing any of the work, do they really deserve to have that?” she said.

Freeman wants consistency across grades from different teachers, which she did not see with her two daughters at McCaw STEAM Academy. Although they would do similar assignments, she said, they were graded differently from one class to another.

“There’s actually quite a long history to that. The real culprit is not really the zero versus the 50, but it’s the percentage grade system,” said Thomas Guskey, a University of Kentucky professor who has worked extensively on student assessment.

When computer use became common in the 1990s, there was a resurgence of percentage-based grading, mainly because the software programs were developed by engineers who liked percentages, he said.

Amid the debate, one oft-cited 2012 study from Theodore Carey and James Carifio found that minimum grading at one high school did not inflate grades or promote students who should not have been promoted.

While the topic remains divisive, the new leader of the Clark County schools intends to leave grading decisions up to schools — meaning that grades will remain inconsistent across the Las Vegas Valley.

He wouldn’t say whether he supports minimum F policies but repeated a familiar mantra: an F, whether a 10 or a 50, is an F.

“I’m a supporter of making sure that children learn and master the material,” he said.

A previous version of this story incorrectly reported the name of Nevada Learning Academy.