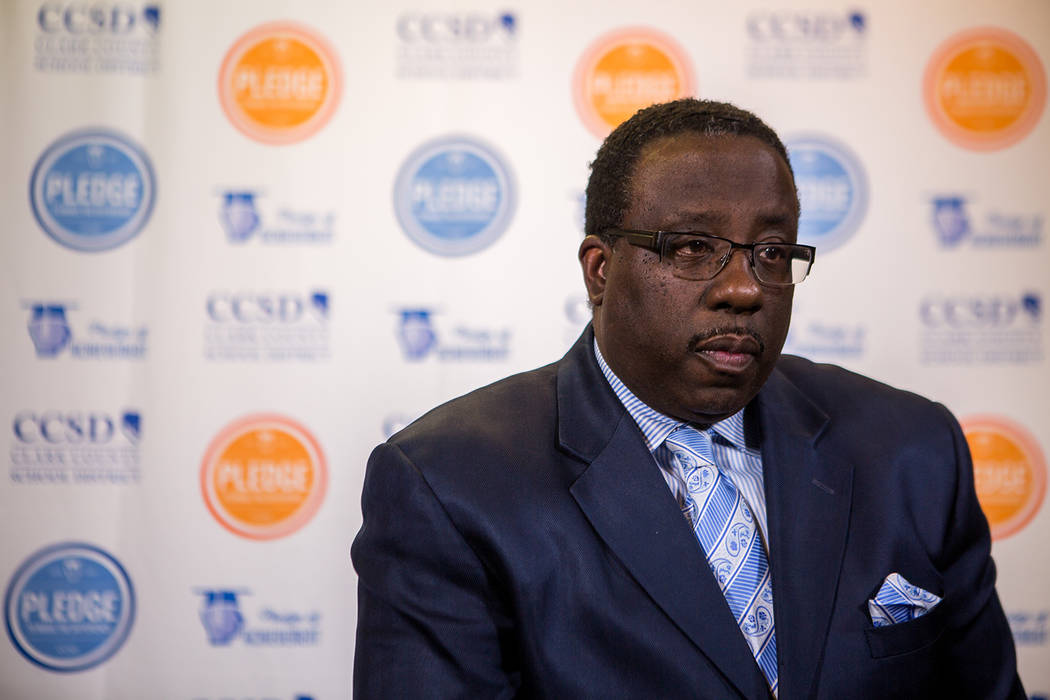 When it comes to mass violence, the Clark County School District has been lucky.

The last on-campus fatal shooting was in 1990, a student-on-student incident at Eldorado High School that left one teenager dead.

Since then there have been close calls, multiple threats and shootings close to campus — including a 2015 fatal shooting outside Mojave High School — but no school in the area has experienced anything similar to what happened Wednesday in Parkland, Florida.

That doesn’t mean officials in the district aren’t concerned about safety. Nobody wants to see what unfolded in Florida, where a former student killed 17 staff and students, happen in Las Vegas.

Armed officers on campuses, surveillance cameras and student and staff training are all used to help keep the 358 district schools safe, but no single strategy or precautionary measure can guarantee safety.

Something that will never change, according to Young, is the need for strong communication before a problem can explode into tragedy.

School district officials say they have layers of security aimed at keeping staff and students safe from intruders or insiders.

Each comprehensive high school in the district has at least one dedicated police officer on campus — a district police officer at urban schools or a police officer from another law enforcement agency at rural schools. Other officers are assigned patrol duties in and around other schools, district officials said Thursday.

Elementary and middle schools without an assigned officer are served by “patrol officers,” who pop in and out of schools in an assigned geographic area.

Clark County is one of about 125 school districts nationwide that has its own police force, according to Young. Most other districts, including Broward County, Florida, scene of Wednesday’s shooting, contract with local law enforcement agencies to provide a “school resource officer” on campus.

Having dedicated officers on campuses is a big deterrent to crime and violence, Young said, because they become ingrained and can earn the trust of students. That helps head off potential problems and enables them to investigate rumors that might pop up, he said.

Campus police also can serve as a first line of defense in an “active shooter” scenario while backup is called in. Various agencies conduct joint training on responding to school incidents to ensure they can work together smoothly.

But having an officer on campus is not a panacea.

A school resource officer was on campus at Marjory Stoneman Douglas High School during Wednesday’s attack, according to news reports, but did not encounter the gunman.

Many Clark County high schools are considered “open-air campuses,” meaning walkways are open and there can be multiple entry points.

Signage directs school visitors to check in at the front lobby, but the design of many local schools would allow someone to enter the school and bypass the office.

Campus officers provide a second layer of security in situations where someone does not sign in at the office, said Young.

“If they’ve got somebody that doesn’t belong, normally they will challenge them and redirect them to the main office,” he said.

Any outside doors are to remain locked during the day, with oversight performed by school police officers, campus safety monitors and staff.

The district has a good security camera system that can be accessed at each school and remotely, giving staff and police a good window to monitor activity on and around campuses, Young said.

It wasn’t immediately clear how the Florida shooter, identified by law enforcement as a former student at the school, gained entry to the campus.

Schools are required to hold monthly training sessions for several emergency situations, including lockdowns, shelter in place, fires and even earthquakes. The dates and times of the drills are left up to principals.

As a result, responding to an incident “almost becomes second nature,” said Young. “When they hear the alarm, kids already know what to do.”

Staff members also receive annual training on what to do if there’s an active assailant, which covers how to account for students in a crisis and safe evacuation strategy, among other topics, according to the district.

Under state law, schools are required to have safety plans, including a section that addresses an “active shooter” situation.

If there’s an active assailant on campus, school staff’s main responsibility is to keep the students safe, Young said, and let the police respond to the assailant.

Another philosophy known as “Run. Hide. Fight,” which teaches staff to first try evasive tactics but fight back with improvised weapons or even fists as a last resort, is gaining traction in some school districts around the nation.

While Young noted reports of staff members acting heroically in Florida, he said the CCSD encourages employees to make sure students are safe and leave the fighting to those trained to neutralize threats.

“That’s a big enough job right there,” he said. “Let the law enforcement professionals come in and deal with that.”