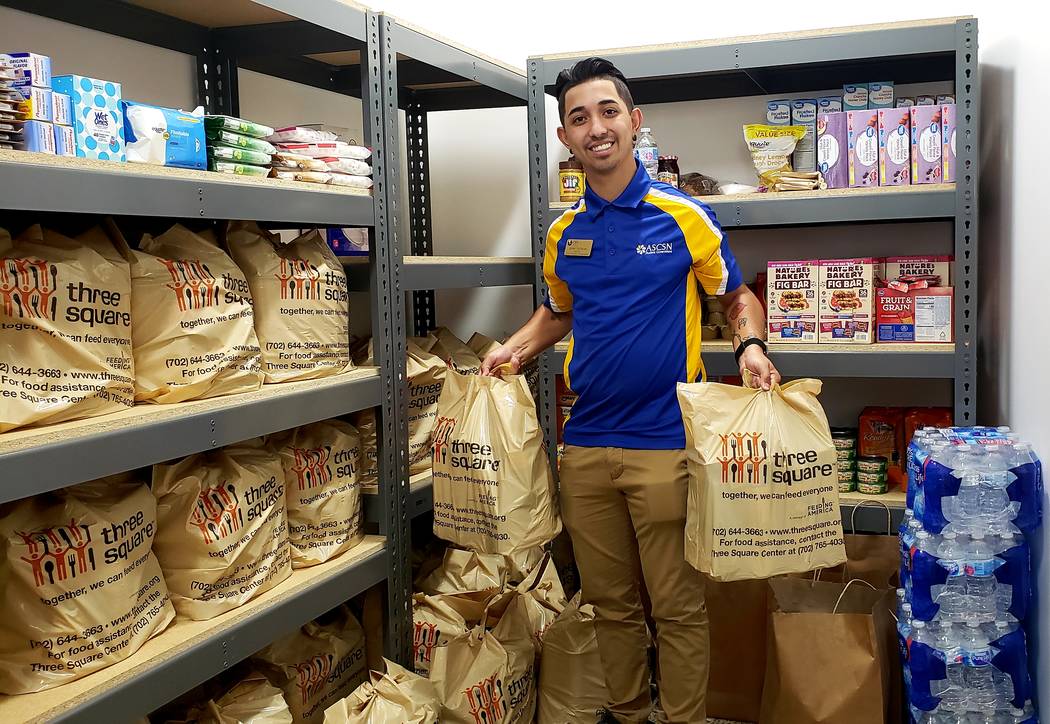 Julien Calfayan, a senator with the Associated Students of the College of Southern Nevada, holds two bags of groceries available to students and staff at at the school's three campuses via the new Coyote Cupboard. (CSN)

The College of Southern Nevada has opened a food pantry on each of its three campuses to offer free snacks and groceries to students and staff facing food insecurity.

A recent campus survey found that almost half the student population reported being unable to purchase food at times. Another one-third of students said they or other adults in their household skipped or scrimped on meals because there wasn’t enough food to go around.

Akins added that those numbers could be even higher due to the shame and stigma of reporting hunger.

CSN received a $300,000 grant from the University of Nevada Cooperative Extension, as well as a grant from Gov. Steve Sisolak’s office to open the Coyote Cupboard at the beginning of the fall term. Located in the school’s new student union building, it’s available to all current students and staff, who can visit twice per week to pick up food or personal care items like toothbrushes and soap.

The pantry offers grab-and-go items like snack bars and instant noodles for students stuck without a meal option between classes. But pantry visitors can also take home bags of groceries filled with pasta and other ingredients meant for dinner.

The grocery bags will be particularly beneficial to students with children or families to support, Akins said.

The pantry will be operated jointly by the CSN student government and Three Square Food Bank, which distributes food at locations throughout Southern Nevada.

Julien Calfayan, a senator with the Associated Students of the College of Southern Nevada, said the Coyote Cupboard is meant to reduce the obstacles that low-income students face while attending college. The campus hunger survey also found that 20 percent of students face housing insecurity, and nearly 12 percent didn’t have a home.

“As someone who didn’t come from a very fortunate background, it’s touching to be able to give this back to students who may be in similar situations, to allow them to be as successful as possible,” Calfayan said.

In the future, Akins and Calfayan would like to see the pantry expand to include more feminine hygiene products, as well as baby care items like diapers. A farmer’s market offering free produce is planned for October.

The pantry is not yet accepting donations as staff first want to see which items are most in demand. The plan for now is to make more students aware of the pantry’s existence, Akins said. Since the pantry opened, it’s seen about five people per week stop by.

“We want students to know this is temporary assistance to get you through college, then you’ll get a job,” Akins said. “Then hopefully after that, you’ll give back.”