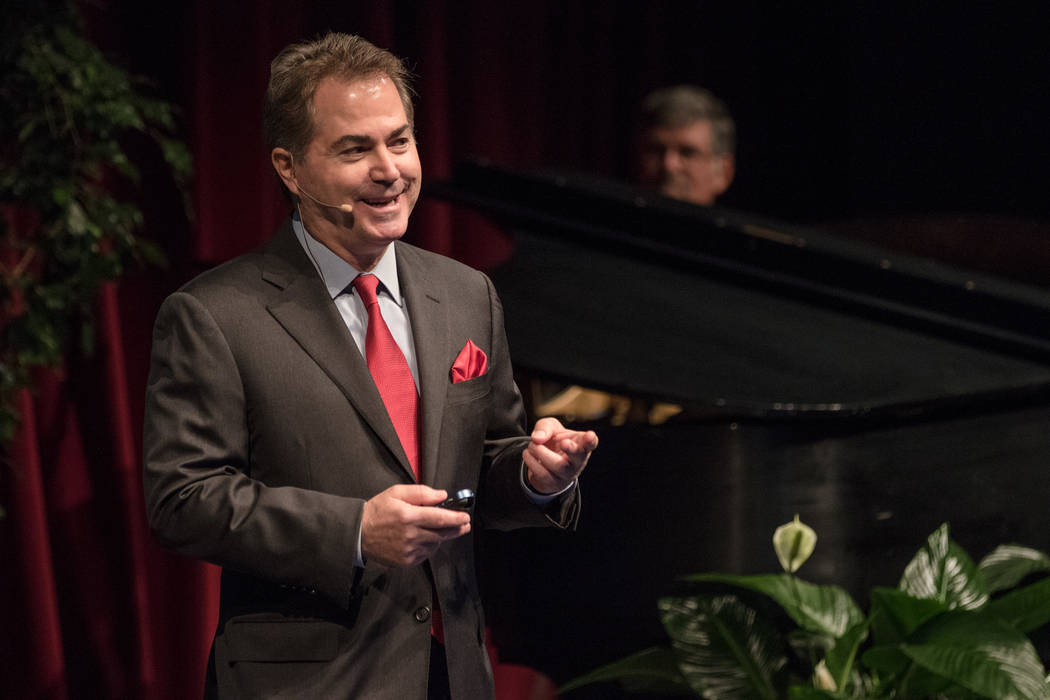 UNLV President Len Jessup said Wednesday that media reports of his ouster are untrue, but he has told Nevada System of Higher Education Chancellor Thom Reilly that he will "begin looking at other opportunities." (Morgan Lieberman/Las Vegas Review-Journal)

UNLV President Len Jessup is looking for a new job, so one of the university’s biggest donors is rescinding a $14 million gift.

The Engelstad Family Foundation said in December it would donate $14 million to the university’s planned medical education building, but that’s now off the table, said Kris Engelstad McGarry, a trustee of the foundation.

“Part of our proposed commitment to them was predicated on the fact that leadership did not change,” Engelstad McGarry said Wednesday. “We rescinded that grant today. We are completely dedicated to the scholarships we have in place for the undergraduate and medical school students, but we don’t trust the stewardship of the board of regents to handle our money, sadly.”

Jessup said Wednesday that he will begin “looking at other opportunities,” a day after reports that he is being forced out of his job.

“Recent media reports about my pending departure are misleading,” he said in an email to the campus community. “It’s no secret that a few regents and I have not always agreed on the direction of UNLV under my leadership.”

Engelstad McGarry said the foundation’s agreement with the university included a provision that Jessup and Barbara Atkinson, the founding dean of the medical school, remain as leaders at the school.

“The way this has unfolded has left us even more concerned with this system and what’s going on with the regents,” Engelstad McGarry said. “It’s a very sad thing when you want to support your local university and they make it very difficult to do so. I think they forget it’s a gift. It’s not an obligation.”

Jessup, 56, has come under fire at a board of regents meeting for the rising cost of UNLV’s new medical school. Also last week, Regent Trevor Hayes questioned the university’s handling of its dental school and a dentist who reused a single-use dental implant device on patients.

“Over the last several weeks, I had conveyed to Chancellor Thom Reilly that the governance structure makes long-term sustainability for any president challenging,” Jessup said. “I continue to be passionate about UNLV and all our initiatives, but expressed to him my intent to begin looking at other opportunities.”

The foundation has given millions of dollars to the university, including scholarship money that has supported the medical school’s first four classes of students.

“Even with philanthropy, it’s a transaction, and both parties have to fulfill their end, and they did not,” Engelstad McGarry said. “To be put in this position is very uncomfortable. I take no pleasure in this at all. It’s very sad.”

Regent Patrick Carter said Tuesday that Reilly completed Jessup’s personnel review earlier this year. The evaluation will not be finalized until after it is approved by a committee made of community members, UNLV foundation members and faculty. That could happen in June.

Hayes, who has been the most vocal regent concerning Jessup’s decision making, said one way to review the work of a president is by five regents coming together to call a “personnel session,” but that has not been done. He said the regents’ intended course of action was to wait until Jessup’s public review.

“It’s probably the right decision for this moment,” Lieberman said.

Regent Cedric Crear, who was the sole vote against Jessup when he was hired, said Jessup has had plenty of challenges since taking the job in January 2015.

“The challenges of dealing with a major university, trying to achieve a lot of goals and a lot of moving parts, it’s not an easy job,” Crear said. “It’s no secret Len was not my choice for the presidency. But with that said, when he became president, I made a commitment to do all I could to help him be successful in his career at UNLV.”

However, Lieberman said Jessup’s announcement is bothersome, because he has spent more time than his predecessors on fundraising, and community partners and donors support Jessup.

“I think that the donors and community leaders will not see this as a positive thing if he does indeed seek another job,” Lieberman said.

Jessup, UNLV’s fifth president since 2006, requested that his review happen after the completion of his third year. His five-year contract expires in December 2019.

According to his contract, if Jessup were to be terminated, UNLV would owe him the remainder of his base salary — about $918,750, beginning in April. Jessup made $534,668 in 2016, according to Transparent Nevada. However, if he chose to resign early, he wouldn’t be owed anything, and he would not owe anything to the Nevada System of Higher Education.