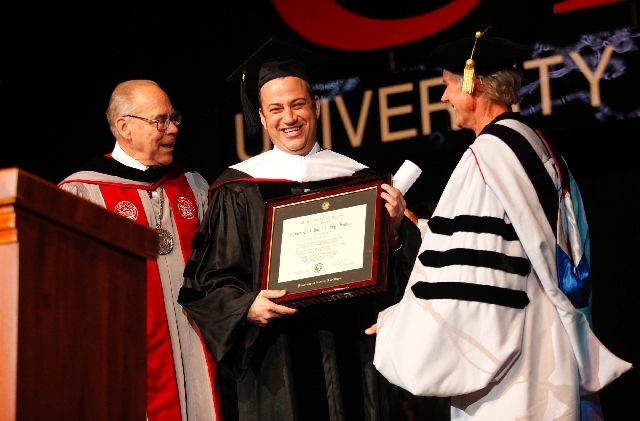 Comedian and television personality Jimmy Kimmel, center, is handed an honorary doctorate from Regent Rick Trachock, right, with UNLV president Neal Smatresk, left, during the commencement ceremony for the graduating class of 2013 at the Thomas & Mack Center at the University of Nevada, Las Vegas on Sunday. 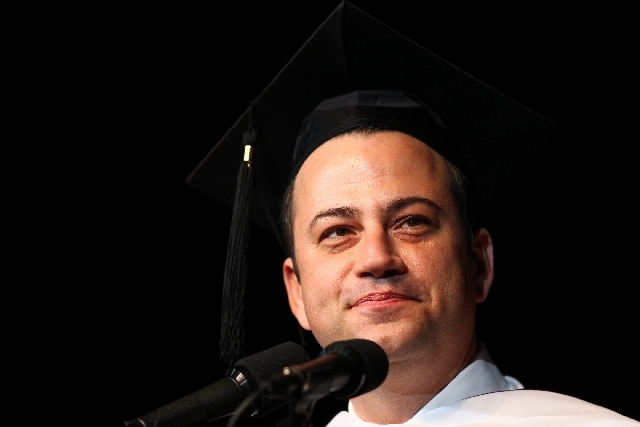 Comedian and television personality Jimmy Kimmel, speaks after receiving an honorary doctorate from UNLV during the commencement ceremony for the graduating class of 2013 at the Thomas & Mack Center at the University of Nevada, Las Vegas on Sunday. 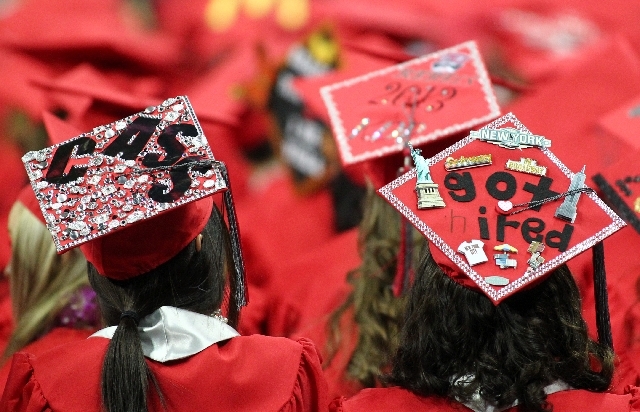 Graduating students have something to say on their mortarboards during the spring commencement ceremony Sunday at the University of Nevada, Las Vegas at the Thomas & Mack Center . It was the university's 50th spring commencement. 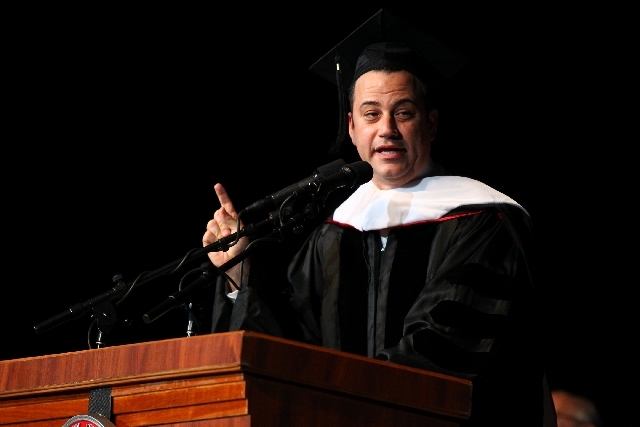 Jimmy Kimmel speaks after receiving an honorary doctorate Sunday during the UNLV spring commencement ceremony . The ABC late-night talk show host attended the university for a little more than a year during the mid-1980s after graduating from Clark High School.

Former UNLV student, comedian and television personality James Christian “Jimmy” Kimmel was back on campus Sunday to encourage graduating students to finish any tasks they begin in life.

“My message for you today is ‘finish,’ ” the host of ABC’s “Jimmy Kimmel Live!” told the University of Nevada, Las Vegas class of 2013 Sunday.

In the morning event, UNLV awarded an honorary degree to Samuel S. Lionel, partner and founder at the law firm Lionel Sawyer & Collins. In the afternoon the honorary degree went to Kimmel, who attended the university for a little more than a year after graduating from Clark High School.

He moved with his parents to Arizona, where he enrolled at Arizona State University but didn’t complete his degree there, either.

“I feel inadequate,” Kimmel told reporters before the commencement. “I don’t necessarily feel deserving of this honor, but it’s accepted.”

“Now I’m officially a doctor, and I will start prescribing,” he said. “I will start with painkillers.”

And he kept the audience laughing the entire time he was onstage, recounting his own short-lived time on campus.

Kimmel’s overall grade point average was a 2.36 for the 1985-86 academic year. He said students at that time were allowed to drink, which was why he had no memory of all the classes he took.

“I worked harder on this speech than on all the homework that I had at UNLV,” he said.

Kimmel also offered some advice to the new graduates:

“Don’t go into the world,” he said. “The world is no place to go into. There are no jobs.”

But he concluded by encouraging students to finish what they start, and to do it well; and to try something different if they don’t like what they are doing.

Smatresk said Kimmel’s creativity and humor took him to the top of the entertainment field, and that the comedian has been a strong supporter of UNLV athletics. Beginning next year, Kimmel will start a scholarship at the university .

“For that and for all his local support,” he was awarded the honorary degree, Smatresk said.

Even without Kimmel’s free entertainment, some graduates had reason to be in a good mood.

Las Vegas native Annie Bouck, 22, was on hand to pick up her civil engineering degree. She said she’s excited to graduate, especially since she already has a job offer from Southwest Gas.

“I definitely feel very fortunate,” she said. “I know it’s going to be challenging for some people out there.”

Anthony Alegrete, 33, who received his degree in marketing, was also glad to finish college.

Alegrete said he was in and out of trouble when he lived in Los Angeles, so he moved to Las Vegas to try to get away from bad influences. Then he decided to attend college.

“Academia is the best way for me to get ahead in life,” he said.