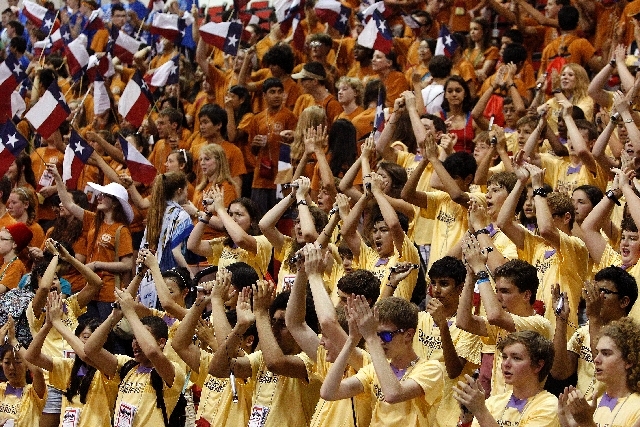 Members of the National Junior Classical League cheer Tuesday during their national conference at UNLV. Students from around the United States are at the conference. The weeklong celebration ends with a toga party Friday at Cox Pavilion.

From California to Maine, Florida to North Dakota, teenagers pour into the Las Vegas arena from all over the country chanting cheers.

They shout louder and louder, trying to drown out one another. The words — some in English, some not — run together. The teens rally for 15 minutes, filling the bleachers and the arena floor.

The distinctive sound of a gavel on hardwood hushes the 1,300 people. Not your normal high school pep rally.

“It’s such a surprise to see so many kids screaming and cheering — for Latin,” says event organizer and The Meadows School Latin teacher Sherry Jankowski. She smiles at the thought that on Friday, the Cox Pavilion will be a sea of togas. That spectacle marks the final day of a weeklong celebration of everything Latin and Greek in the 60th annual National Junior Classical League convention.

“We obviously don’t see it that way,” says Caroline Tucker, president of the league, which has 46,730 high school members. Tucker is an Indianapolis high school student about to attend Princeton University.

Members, called delegates, participate in athletic Olympika competitions, Certamen (Latin Jeopardy!), and academic and artistic challenges about the classic language and the societies that spoke it.

It took some lobbying and a few years of planning, but the long-standing conference has made its way to Las Vegas and Nevada for the first time, marking a different kind of toga party than the University of Nevada, Las Vegas is accustomed to seeing.

The conference won’t get as much attention as the likes of the AVN Adult Entertainment Expo or the International Consumer Electronics Show. But you don’t learn Latin to be cool, several students remarked, even joking about the nerdiness of it all.

“Ask a kid here, ‘Why Latin?’ and you’re going to get a thousand different answers,” says Jeremy Walker, a Latin teacher from Crown Point, Ind.

Walker noted that all students can find an interest here, either in the era’s architecture and art or in just learning about the cultures that have inspired TV shows and movies.

And Latin is still of great benefit to students as it is the basis of much of our language today, he says.

“It’s a gateway language,” Walker says, referring to the College Board’s studies that Latin students do better on their SAT and ACT tests.

In 2012, the average verbal SAT score for a Latin student was 617 compared with a 602 overall average.

Adam Safadi used those kinds of statistics when he and other Colorado Latin students drove to Casper, Wyo., after hearing from another delegate that the school there was cutting Latin.

“It worked. We convinced the principal,” says Safadi, who’s now in college at Princeton but returned to the conference ­— which cost students $475 for all accommodations except travel ­— to see his closest friends.

“When they see a sea of people like them, there’s a kindred spirit there,” Walker says.

Las Vegas Mayor Carolyn Goodman made it clear that she’s one of them, telling the story of parents petitioning her to cut Latin from The Meadows School, a Las Vegas private school that she founded in 1984.

She approached the petitioning parents and asked why the push.

“Of course you know the answer. It’s a dead language,” Goodman says. Her response: “Go to another school. We’re going to have Latin.”

She acknowledged the quirkiness of the conference — the cheers, the songs, the fervor.

“A little off the page,” Goodman says. “But we all need to be off the page a little bit. It makes us individuals.”