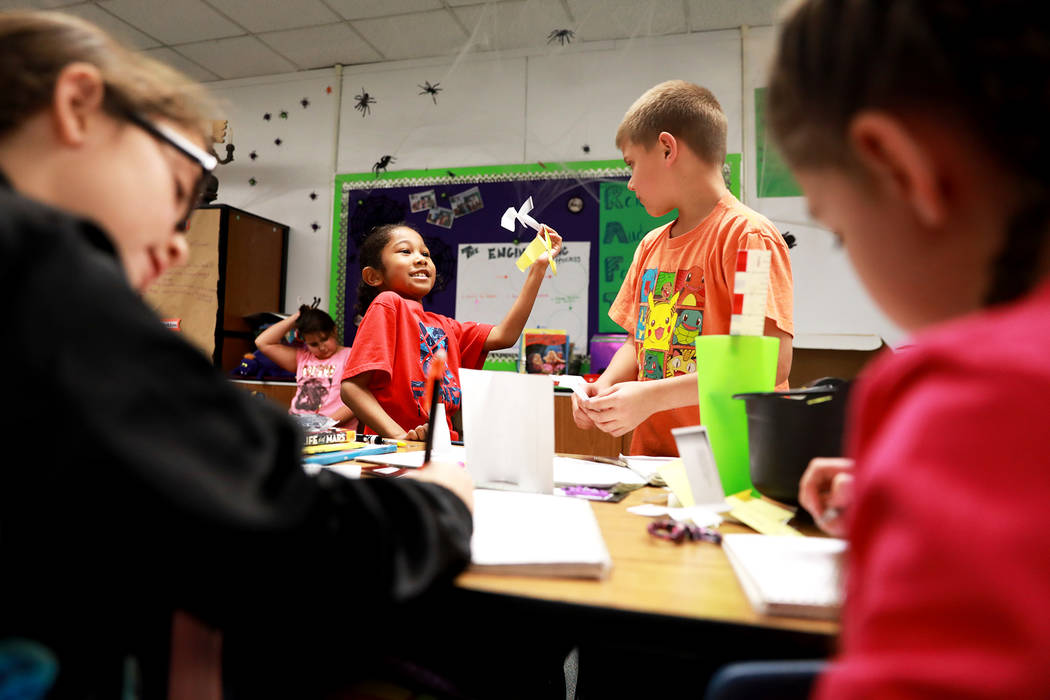 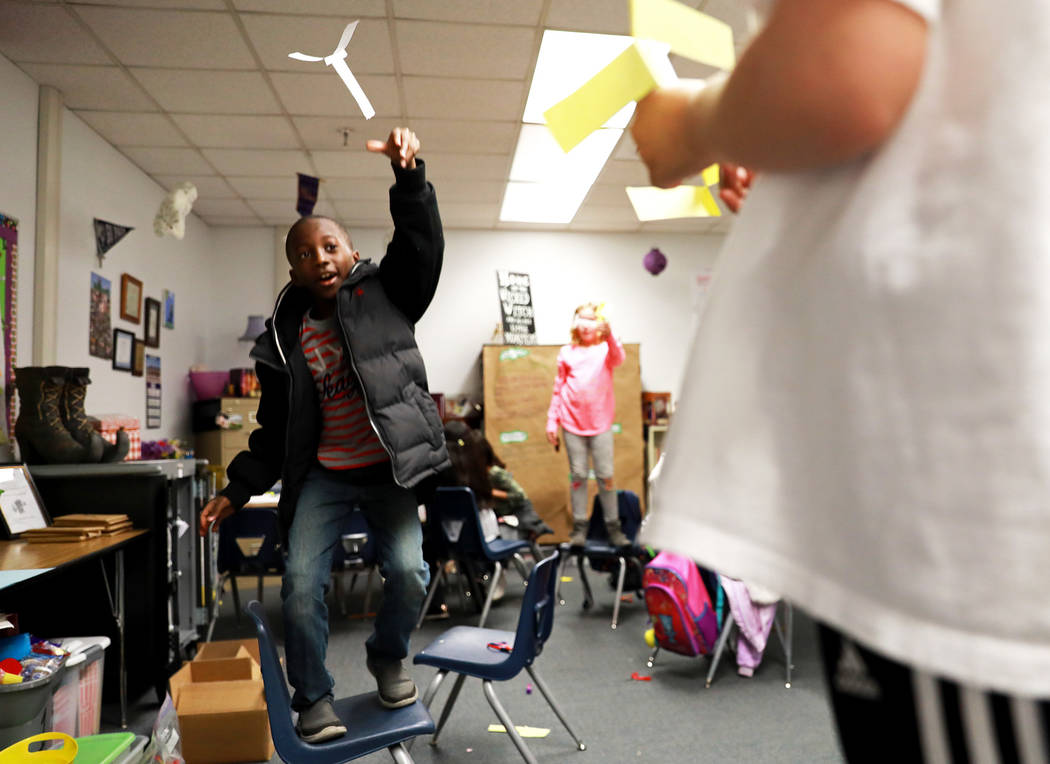 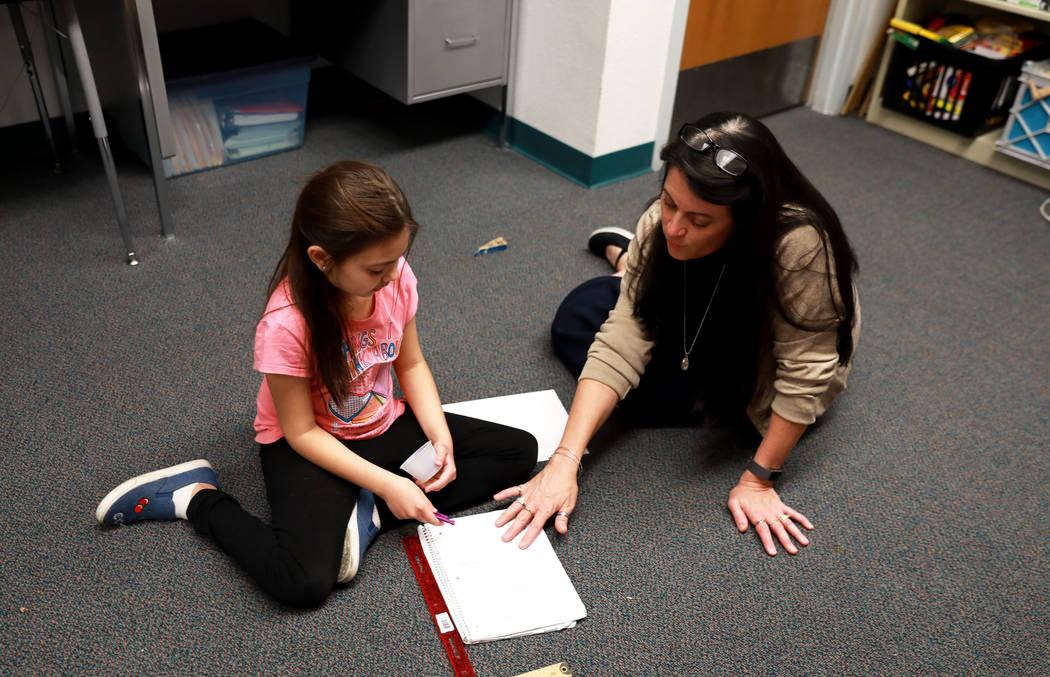 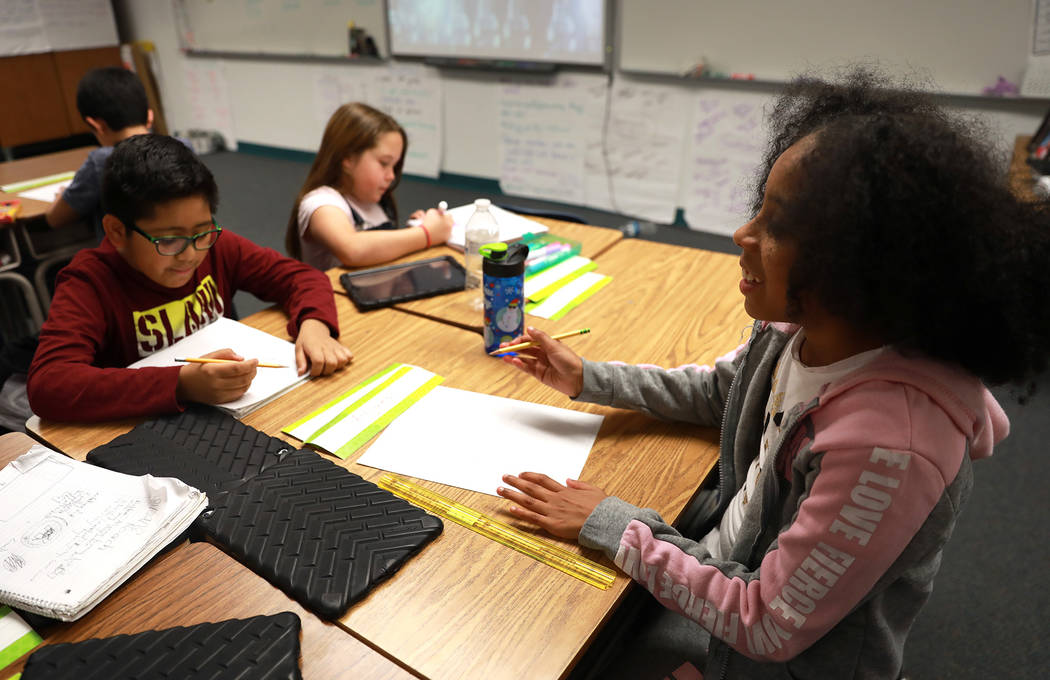 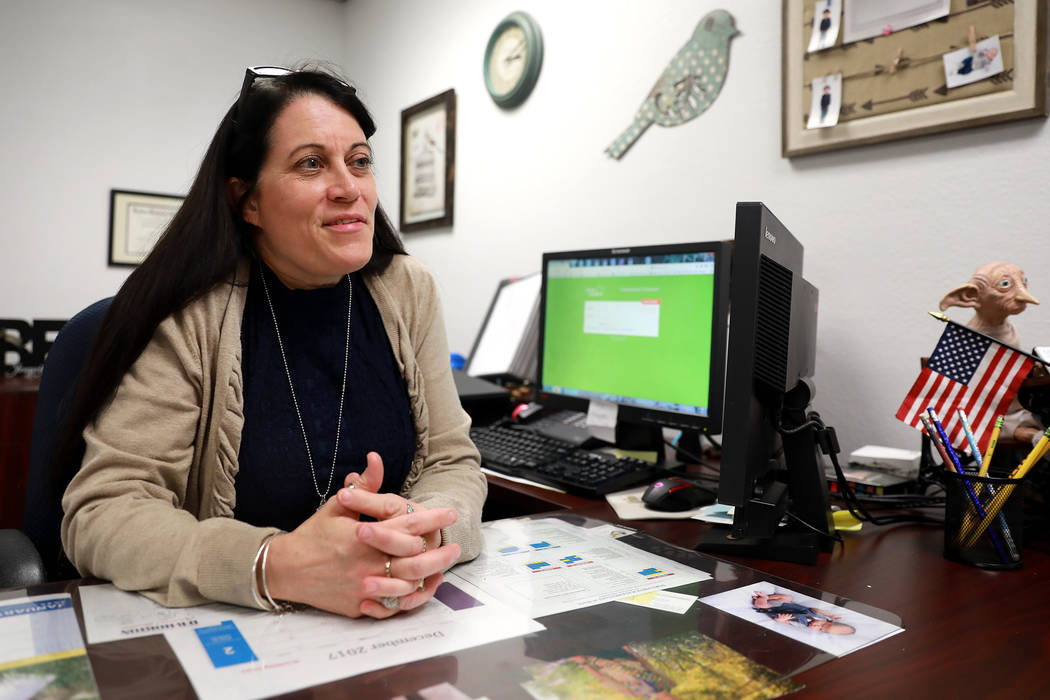 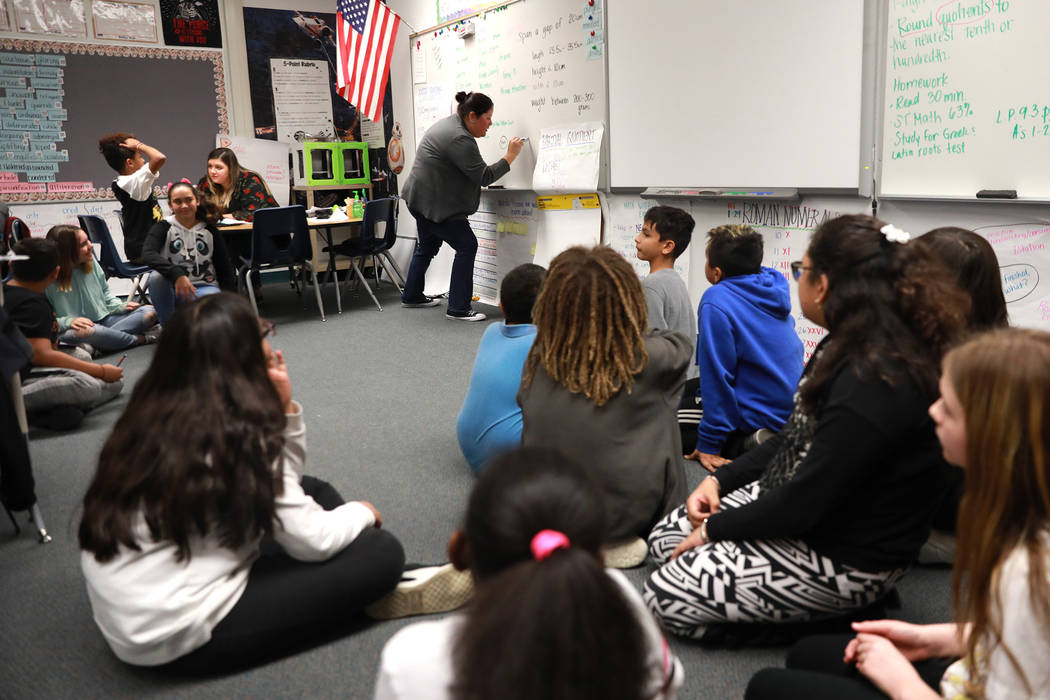 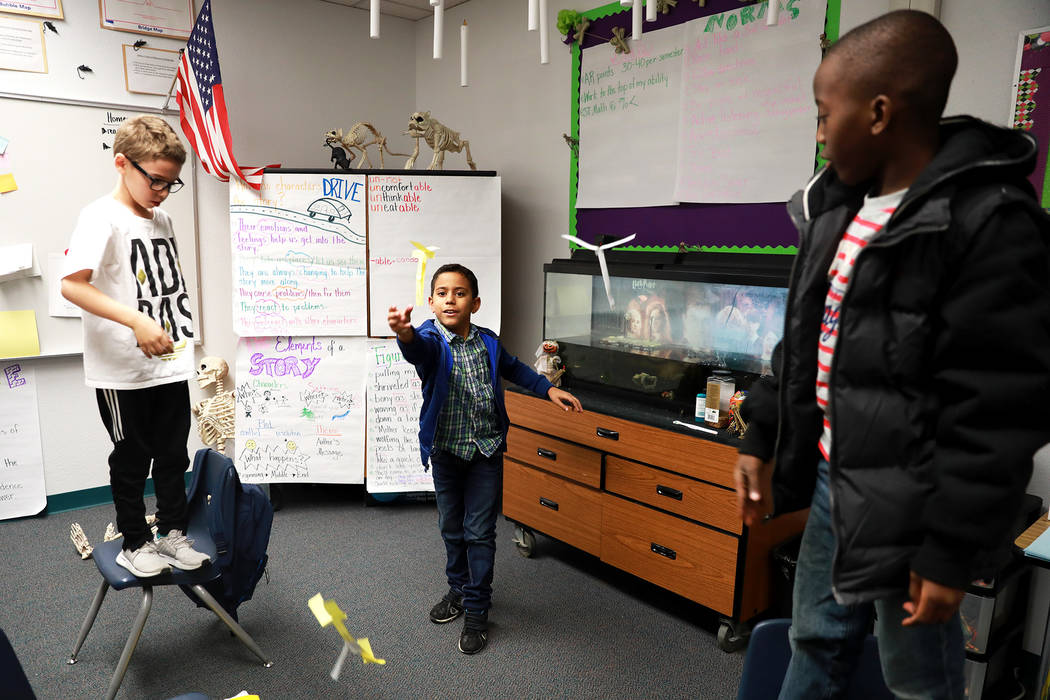 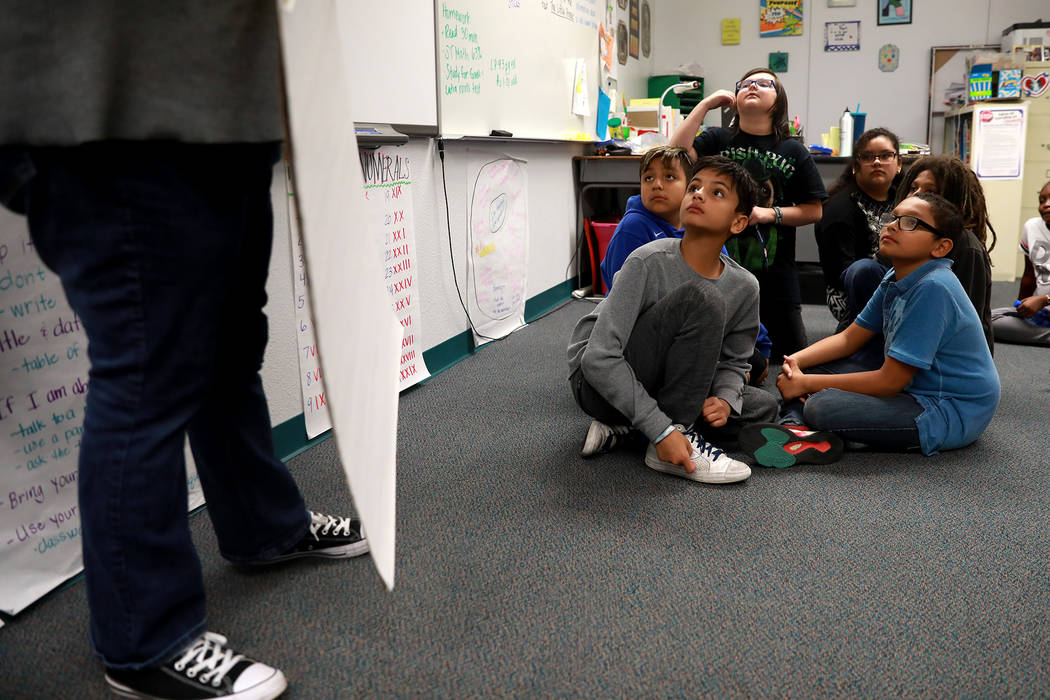 When the French Elementary teacher reflected on the school’s poor two-star state ranking for the 2013-14 year, he realized that improvement had to come from within.

“I think as a school, we had become complacent,” he said. “I think we needed to change that, and that two-star (rating) was kind of a wake-up call.”

One reason for rating systems is to capitalize on the human desire to compete, and in the case of French, it appears to have served its purpose.

The Las Vegas school has now lifted itself from the low end of the accountability system and attained five stars in the most recent star ratings released in the fall.

Are there lessons for other struggling Clark County schools in the turnaround of a school where all students qualify for free or reduced-price lunch based on their low-income status?

Principal Tammy Villarreal-Crabb thinks there may be, attributing the reversal to two main factors.

One is a sense of safety.

Another factor: Students know their own achievement data, Villarreal-Crabb said.

“You can walk through and ask any of my kids, ‘What’s your current reading data? What’s your math data?’” she said. “And they’ll tell you where they’re at.”

The data have given students and teachers something to smile about. Roughly 65 percent of the school’s students reached proficiency in English and 55 percent in math, both above the districtwide scores.

French Elementary is one of 59 schools across the district that improved their star rating in 2016-17 over the last rankings released in 2014, according to state data. French and Smalley Elementary in Henderson made the biggest jump of three stars, while 16 increased by two stars and 41 increased by one.

French’s five-star rating for 2016-17 isn’t directly comparable to its lower rank from four years ago, since the rating system changed. But if anything, state officials argue, the new framework is more rigorous.

The new one features the Smarter Balanced proficiency exam and slightly different grading categories, including a new English language proficiency section. Schools can also earn an extra two points beyond the 100 through participation in a climate survey.

The state is still determining the rating system for high schools, which did not receive new star ratings for the 2016-2017 school year.

French Elementary had three years to get its house in order because a testing glitch in 2015 meant that schools were left without star ratings until this past winter.

It has done so without receiving any Victory or Zoom funds for schools with high levels of poverty or English language learners.

It did receive nearly $60,000 in federal Title I funds for high-poverty schools, $28,800 in weighted funding for certain students and $3,300 in federal funds for English language learners this year, according to Villarreal-Crabb.

“We’re thankful for what we have,” she said. “And we just try to work smarter with the money.”

One method the school adopted for improvement, known as project-based learning, also is mentioned as a factor in French’s improvement.

Wetjen’s students, for example, are designing their own inventions as they try to think like engineers.

The theory, Villarreal-Crabb said, is that there are no right or wrong answers. It’s about getting students to think and follow a learning standard rather than a textbook.

“Every teacher on my campus now does project-based learning, even my kindergarten teachers,” she said. “They love it, because every year your kids are different, every year there’s a different demographic in the classroom.”

But French staff members aren’t resting on their laurels. They’re focused now on those students who aren’t reaching proficiency.

“Right now, there’s just over 100. Most of them are new to our school,” Villarreal-Crabb said. “We meet face to face every other month and say, ‘Ok, what are you doing to help you get to that proficiency piece?’”