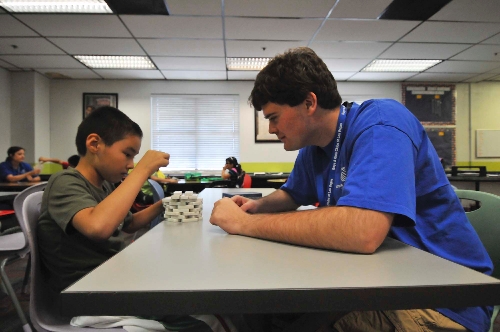 Five local teens are mingling this week with representatives in Washington, D.C., and receiving leadership development training as part of Bank of America’s Student Leaders program.

Bank of America offers five paid internships to high school juniors or seniors at local nonprofit organizations. Since 2004, the bank has sponsored 1,600 students in 44 cities.

This is the eighth year the bank has partnered with the Boys & Girls Clubs of Las Vegas.

Chau, 16, the youngest of the group, has a year of high school left but already knows she wants to be a neuroradiologist to be able to help her mom, who has past medical conditions.

Bank of America emphasizes the importance of community service during the application process. Each student has extensive volunteer hours.

“For me, volunteering is everything,” Chau said. “In high school, it was always schoolwork and volunteering. Now I get paid for it, and it helps my family.”

Gibson did much of his community service as a Boy Scout. In 2008 he led a troop of 20 scouts on a cleanup mission at Lake Mohave near Laughlin.

He plans to study chemistry at Cornell University in the fall and eventually attend medical school.

“I want to give back to my community,” Gibson said. “It’s hugely important.”

He said a career in medicine could afford him a chance to do that.

During his time at the Lied Memorial Clubhouse, 2850 S. Lindell Road, he teaches kids to play chess, a hobby of his.

At the same club, Patricio-Archer has started a music program to teach music basics and theory without actually having instruments. She hopes it will turn some of the kids on to band in high school, which was a major part of her high school career.

“I was in band, and it really did keep me on track in high school,” Patricio-
Archer said. “I think if a lot of these kids without structure in their lives got into a program like that, it would keep them in school.”

Patricio-Archer, perhaps more than any of the others in the Student Leaders program, will benefit from the Washington, D.C., trip.

“Thirty years from now, we’re looking at the presidency,” she said. “But maybe in 10 years, I just want to be a lobbyist or working in a congressional office. I do want to run eventually, maybe for governor, Congress, something.

“I just feel like that’s the way if you want to make a change. It’s making an impact every single day.”

She plans to start her career this fall at Stanford University with a major in political science.

Martinez expects to benefit most from her internship at the Donald W. Reynolds Clubhouse, 2980 Robindale Road, because she plans to run her own nonprofit organization some day. In fact, she already has.

She started a club, Creating Hope, Answering Needs, Changing Everything, or CHANCE, two years ago at Green Valley.

“Basically, it ensures the stability of other nonprofit organizations,” Martinez said. “It helps raise funds for nonprofits and helps provide volunteers for them by acting as a middleman to get the information out to everyone.”

She said her club led the school last year in volunteer hours.

She called this summer’s program “the perfect internship to apply for.”

“I really want to make sure before I start my own that I get as much experience with different nonprofits as I can,” she said.

Martinez will attend Indiana University Bloomington this fall. While majoring in entrepreneurship with a minor in nonprofit management, she said she will have to learn to be a basketball fan, too.