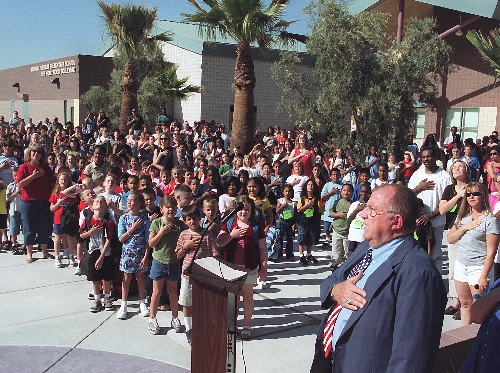 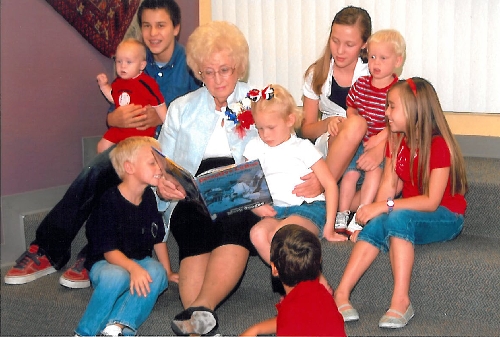 Ten years ago, Mervin Iverson attended the dedication ceremony of the elementary school that bears his name. In many ways he and his family have never left the school.

During the school year, Iverson’s wife, Sherie, comes in every week to accompany the school chorus on piano. In 2008, in honor of her years as an educator and her volunteer work at the school, the Iverson Elementary School library was named for her.

“The kids think I own the library and Mervin owns the school,” Sherie Iverson said with a laugh. “They ask us what we did to own them.”

The Iversons moved to the valley more than 50 years ago . Mervin Iverson spent 41 years in education, first as a teacher and later as vice principal and principal. The lion’s share of that time was spent in Clark County, but in 1980 an unexpected opportunity drew the Iversons halfway around the world.

“I was contacted by someone regarding creating a curriculum in Saudi Arabia,” Mervin Iverson said. “I helped create that curriculum, and then one thing led to another and we went there to implement the curriculum.”

The job brought Iverson to Dhahran, Saudi Arabia, to take on the job of associate superintendant for the Arabian American Oil Company’s school system. While there, he oversaw a district of 10 schools and 4,000 students, primarily Americans and Canadians with a few children from Saudi families with a parent in top-level management.

It took some convincing to get Sherie to go to a place where, as a woman, she wasn’t even allowed to drive a car, but she went, bringing four of their five boys. Their eldest was already in college by then.

“It was a very different experience over there,” Sherie Iverson said. “The temperatures were similar – it was a sandy desert – but there was humidity in the air.”

When the Iversons returned in 1985, Mervin Iverson went back to the Clark County School District and worked in a number of positions, including director of curriculum, director of schools, assistant superintendent and area superintendent. He retired in 1995.

In addition to his long service with the county, Mervin Iverson helped create the Clark County School District curriculum and was on the state board of education for eight years. He also was a regional area Boy Scout commissioner.

The naming of the school didn’t come as a surprise to Mervin Iverson.

“In the Clark County School District, you found out that you were being nominated and you had to do part of the preparation,” he said. “We had to put together a booklet that had our biography and letters from different categories of people.”

Eventually, the school board recommended that a school be named for him, and Mervin Iverson requested that it be a new elementary school being built not far from the home to which he had recently moved.

Surgery on his ankles has slowed him a bit recently, but he hopes to spend more time at the school in the coming years.

“Dr. Iverson still comes to all of the school’s major functions, and we see Mrs. Iverson every week,” said the school’s current principal, Linnea Westwood. “We love the Iversons.”