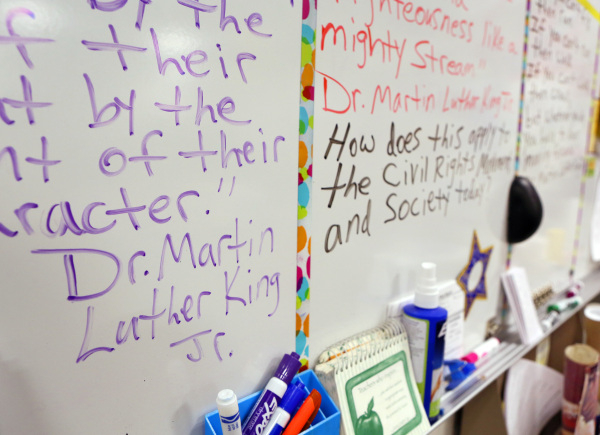 The Nevada Education Department, hoping to put a dent in the hundreds of classroom vacancies across the state, plans to issue temporary licenses to out-of-state teachers who until recently needed to complete a set of requirements before stepping foot on a campus.

Federal education law previously prohibited states from issuing so-called provisional licenses to teachers planning to work in specific subject areas. A special education teacher from California, for example, would first have to pass a test showing expertise in the field or complete college courses related to the subject before the Nevada Education Department would issue her a license.

President Barack Obama in December signed legislation to lift that prohibition, and on Friday, Gov. Brian Sandoval endorsed emergency regulations to immediately allow educators to teach in a class for up to one year while they finish the requirements.

“If I recall correctly, (the Clark County School District) had suggested that if they had this opportunity earlier it would have been around 400 teachers that they could have hired,” Steve Canavero, interim state superintendent of public instruction, said Friday during a conference call with reporters.

As of Wednesday, school district officials reported about 700 classroom vacancies, or 200 fewer than when school started in August, continue to leave thousands of students without a fully licensed teacher.

More than three-quarters of those vacancies exist at schools with the highest share of children from low-income households. Nearly a third of all open positions are for special education teachers.

Canavero estimated that, combined, the 17 public school districts across Nevada could have hired nearly 1,000 teachers had the provisional license regulation been in place since August.

In 2014, the state attorney general’s office issued an opinion based on existing federal law that issuing provisional licenses could cost Nevada millions of dollars in funding for public schools. The state then enacted regulations prohibiting the superintendent from issuing such licenses, according to a release from the governor’s office.

With Sandoval’s endorsement for the emergency regulations, they will proceed to the secretary of state and go into effect by next week, Canavero said.

He then plans to ask a committee that oversees professional standards for educators to approve permanent regulations that will allow the provisional licenses beyond the 120 days allowed under the emergency regulations.

“We have a certain situation right now in a district where they’re trying to hire one teacher,” Canavero said.

“As soon as this is enacted we will let them know that, that can proceed, that they would have otherwise not been able to,” he added. “Again, I don’t want to minimize the impact of just a single teacher coming through this provisional route to a classroom, a needed classroom.”

Canavero said he expects the provisional licenses to have a “significant” effect on the number of teachers that districts can recruit for the 2016-17 school year.