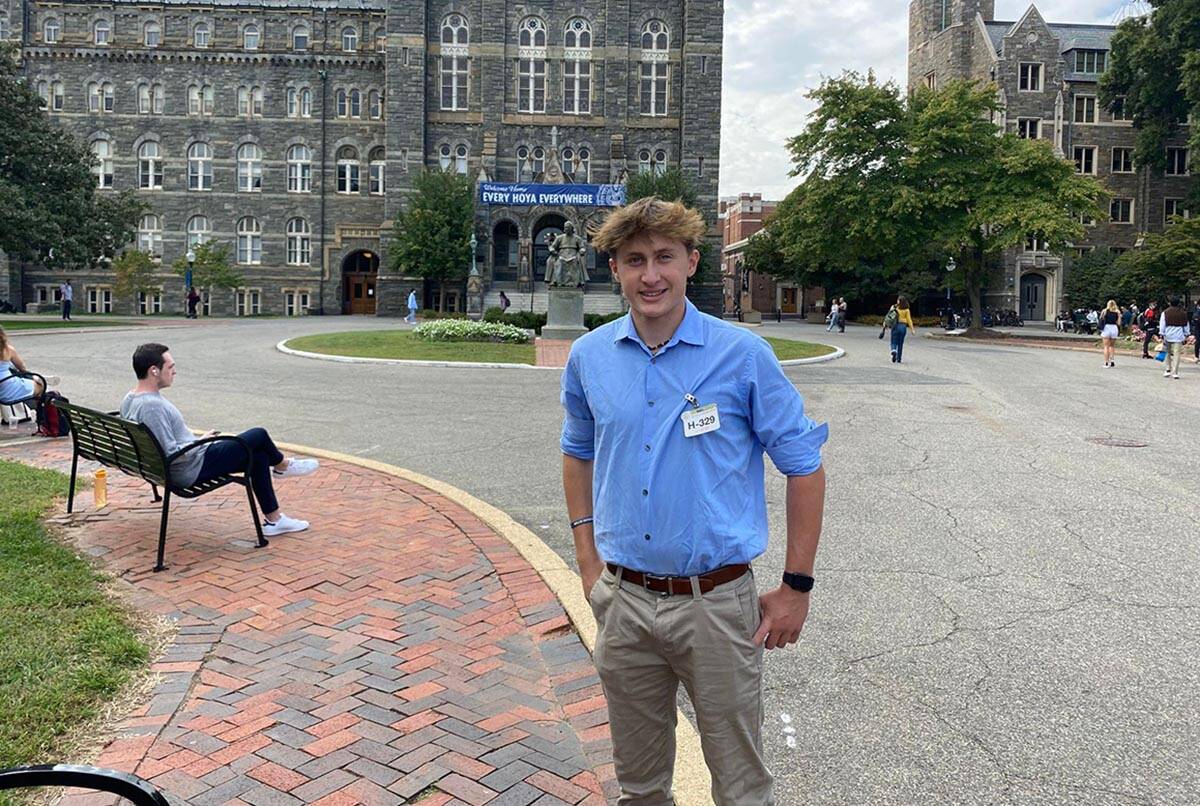 Lucas Gorelick stands outside Georgetown University in Washington, D.C., in October 2021. He is suing the Washoe County School District over what he says are unconstitutional searches of his belongings in recent weeks. (Courtesy of Lucas Gorelick)

Lucas Gorelick was sitting in his car during his lunch hour at Reno High School, listening to music and talking to friends, when a police officer approached him about a tip the school had received saying he had a gun.

“The fact that they would question my credibility for a second, as a student, and as a politically active student, hurt,” Lucas told the Las Vegas Review-Journal. “Then I remembered the society we live in. Anyone could pose a potential threat.”

Understanding that the school’s police officer was doing his due diligence, the 16-year-old said he consented to a search of his truck. No weapon was found.

But Lucas would be asked several more times in the following days to have his belongings searched by school officials, under an anonymous tip system that is used to report safety threats to students in Nevada schools, according to a lawsuit filed Monday in U.S. District Court.

After several searches, he would ultimately decline to have his belongings searched.

“One time in class, they didn’t even say anything, they came up to me and grabbed my bag,” Lucas said. “Before I even got to the back of the classroom, the bag had been opened and they were going through it. That’s when I was like: No, this isn’t right. This is harassment.”

In the lawsuit, Lucas and his father, Jeff Gorelick, claim the searches by the Washoe County School District were unconstitutional.

The school district did not immediately respond to a request for comment Friday.

Lucas, a junior, is due to graduate early at a ceremony next month.

The Gorelicks were told by school officials that Lucas would be unable to go back to school with his backpack unless he consented to a search, according to the lawsuit.

On Wednesday, a judge denied the Gorelicks’ request for a temporary restraining order against the district, according to court minutes.

The SafeVoice reporting system, which was established in 2017 under state law, allows students, parents and school staff to anonymously report threats online, by phone or through an app. No report will go unanswered, and trained professionals at schools and with the Department of Public Safety will respond to tips, according to the system’s website.

But according to a copy of the Washoe County student behavior manual, an unconsented search can only be conducted in conjunction with an arrest, or with “reasonable suspicion” that the student has broken a law or school rule.

A Clark County School District policy regarding student searches also states that there must be “reasonable suspicion that the student is hiding evidence of a wrongdoing” and that students must consent to the search.

Lucas has been involved with political causes like the Nevada Democratic Party and is a campaign finance intern for Sen. Catherine Cortez Masto, D-Nev. — a background that he says makes him a target for bullying at Reno High.

But Michael Paul, area superintendent for the district, said a search must be conducted for every report, no matter the student or their history with the school, according to the lawsuit.

Lucas said that while he once viewed SafeVoice as a valuable program that in the right capacity could use anonymous tips to report drug deals or guns being brought to campus, he now sees that it has the ability to be used incorrectly against students.

“I didn’t see that until after it started to happen to me,” he said. “I’m glad it’s opening my eyes to it.”