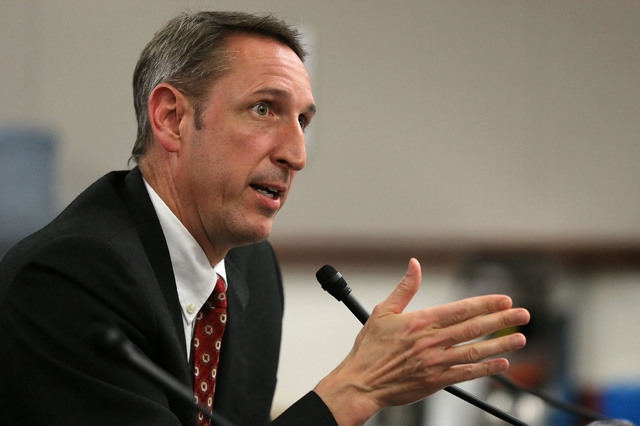 Nevada Sen. Scott Hammond, R-Las Vegas, urges lawmakers to support a bill that would allow parents to get a portion of the state funding that the public school would get and put it toward an education elsewhere, such as a private school or tutoring, during a hearing at the Legislative Building in Carson City, Nev., on Thursday, May 27, 2015. (Cathleen Allison/Las Vegas Review-Journal)

A new poll finding that nearly half of Nevada voters — and more than two-thirds of those from wealthier households — support the state’s education savings accounts didn’t surprise defenders or opponents of the controversial program.

But results of the poll led state Sen. Scott Hammond to suggest that wealthy families are usually the first to take advantage of such new programs.

Hammond, R-Las Vegas, authored legislation last year that allows parents to sign up for an education savings account, or ESA, and tap about $5,100 in per-pupil funding to pay for private school tuition and other educational services.

The Nevada Supreme Court is expected to rule soon on the constitutionality of the voucher-style program, but in a poll released Tuesday by KTNV Channel 13 and Rasmussen Reports, 48 percent of 750 likely voters said they favor ESAs, while 37 percent opposed them.

“That might be true right now,” Hammond said. “But like anything else, when new technologies and innovations come down, it does seem like the rich take advantage of those.”

He compared the favorability of ESAs to the adoption of smartphones and other electronics: Wealthy individuals can afford to pay for the cost of research and development for a new product before the price drops for everyone else.

If the Supreme Court rules in favor of ESAs, Hammond predicted the cost of private school tuition and other services will fall and build support for the program.

“The price point will decrease. The knowledge also will increase among groups of people who may not even know what an ESA is,” he said. “And then you’ll start to see more participation.”

The KTNV/Rasmussen poll also found support for ESAs was higher among women, voters with children at home and younger individuals. Black voters registered the greatest support among racial groups, while 51 percent of Democrats oppose ESAs.

“The question itself as posed in the survey obviously is prejudiced in favor of the program,” said Tod Story, executive director of the American Civil Liberties Union of Nevada.

His organization filed one of two lawsuits against Hammond’s bill, which the Supreme Court considered in a pair of oral arguments on July 29.

Rasmussen, which KTNV reported leans historically Republican, asked likely voters if they favor or oppose a “school choice program” that gives a “$5,000 stipend” to parents.

“Even if someone hadn’t ever heard of the program, I’d be surprised if they were against that,” Story said of the poll’s question. “That isn’t the reality.

“If they had described this exactly as what it is — which is a voucher scheme — the public’s reaction would be vastly different.”

Supporters of the program defend it as an opportunity to grant parents more options in meeting the unique needs of their students; opponents claim it will drain resources from an underfunded public education system and funnel taxpayer money into religious schools.

Story, similar to Hammond, was not surprised that support for ESAs was strongest among wealthier voters.

“The vast number of students already attending private schools are predominantly from wealthier families,” he said. “So if they can get essentially a tax rebate or reduction on their expenses for private schooling, they are going to be in favor of that.”

Rasmussen conducted its poll between July 29 and 31, with a 4 percent margin of error.