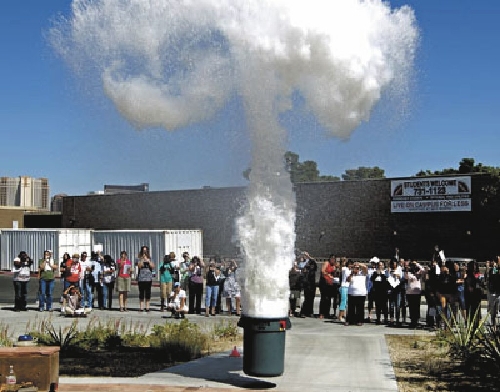 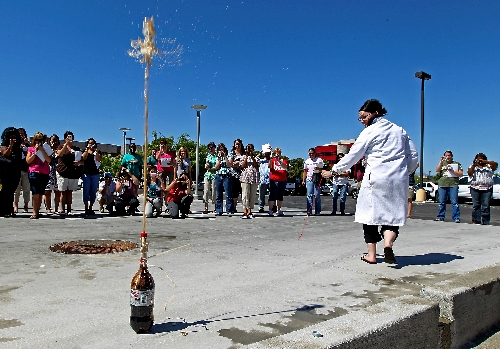 It’s 90-some-odd degrees outside and a bunch of elementary school teachers are standing in the sun staring at a 50-gallon garbage can that’s mostly full of water.

The guy in charge of the garbage can is Adam Simon. He’s a scientist. He’s wearing a lab coat and protective goggles. He’s talking about pressure and volume and density and force and other scientific stuff.

He didn’t warn the teachers about the explosion. It’s more fun that way.

He and the other scientists tape an empty 2-liter Diet Coke bottle to two bricks. They fill the bottle with liquid nitrogen. The bottle freezes instantly because liquid nitrogen runs around negative 200 degrees Celsius.

Then one of them drops the bottle into the garbage can full of water and runs away, real quick.

A few seconds go by.

The trash can — it has to weigh at least 300 pounds with all that water — jumps off the ground. The water geysers into the air as high as a two-story house.

"Now that I’ve done this myself," says Simon, a UNLV geoscience professor, "this is kickass."

Simon studies volcanoes. Magma, gasses, tectonic plates, that sort of thing. He has published articles in prestigious scientific journals. He has field locations in Russia, Yosemite National Park and Nevada. He has conducted research using grants from the National Science Foundation and others.

He’s kind of a big deal.

So what’s he doing here today, in a parking lot at UNLV, talking to 60 Clark County School District elementary school teachers about the wonders of science?

He tells the teachers a story, which he expands on later.

He says that, other than physics, he didn’t really like science in high school. He went to college, the University of Maryland, and majored in political science.

He happened to take a geology class. Wow, he thought, this is pretty great. He took a chemistry class, too, because that’s what you do when you’re a college freshman.

He remembers the professor walking into the room with a bouquet of roses. Weird, but OK.

The professor dunked the roses into a vat of liquid nitrogen. They froze as solid as ice crystals . The professor smacked the flowers up against the wall. They shattered like glass.

"For me, it was a gotcha moment," Simon says. "I didn’t realize how cool chemistry and geology could be." He quickly changed his major to geology.

He wants these teachers — the 60 elementary school teachers who just watched the garbage can full of water explode — to get that same feeling and then to pass it along to the kids in their classrooms.

That’s why they’re all here today. They’re learning what they didn’t necessarily learn in college.

"I was the kid in college whose science classes pulled down my GPA," schoolteacher Bridget Zick says.

She has been teaching kindergarten for a few years but is switching to fifth grade next year at Ronzone Elementary School in Las Vegas.

She’s no scientist. Most teachers aren’t. They get degrees in education. Then they teach reading, math, science and all the other stuff to little kids. They do their best to teach broadly.

Sometimes, the students latch on to a subject and love it. Sometimes — and this is often true in math and science — they don’t. They think it’s too hard.

So there’s a government program to help fix that.

It’s called Project Visions, which is funded through a $600,000 grant from the Nevada Department of Education using federal government money. It partners the school district and the university. The three-year program began last year and will end next year.

The point is to get elementary school teachers a little more proficient in science so they can pass it along to the children they teach.

Eileen Gilligan, the school district’s coordinator for kindergarten through fifth grade math and science, says about two-thirds of the 60 teachers going through the program this summer also went through it last summer.

The teachers, who attend classes for eight hours a day all this week, plus homework, get credits toward a graduate degree.

But more importantly, Gilligan says, the stuff the teachers learn here should translate to the classroom. That’s important, especially for elementary school kids.

She says capturing their interest early can be a big deal later on, when high schoolers must pass a state scientific proficiency exam.

"If we can make sure these kids are ready in K through five, they’ll be better prepared later on," she says.

Zick, the teacher who says she’s anything but a science expert, thinks that will happen.

"When a child asks a question," she says, "you can actually give a scientific answer and not say, ‘Uh, let me get back to you later,’ or, ‘I don’t know.’ "

There is some data to back up the common-sense contention that making elementary school teachers understand math and science better makes students understand it better.

A similar program, also federally funded, that ran from 2005 to 2008 showed that students with teachers who completed the program were more than twice as likely to pass the state science examination as kids whose teachers didn’t go through the program.

To help, he showed them a few demonstrations they could actually do for their students. The liquid-nitrogen-in-the-trash-can-thing might not be a good idea for school kids.

But Mentos in Diet Coke? Very cool. (Mentos is a mint that, for scientific reasons, makes Diet Coke do explosive things when it’s put into a bottle of the drink.)

There’s also this activity in which you get a map of the world. You cut out the continents with scissors. You put it all together like a puzzle. Voila. Tectonic shift.

And so, apparently, does Simon. The guy can’t stop teaching.

Like when one of the local TV stations showed up a half-hour late to the liquid nitrogen/volcano demonstration. Being TV people, they were cool with making the professor do it all over again just for them.

So he did. He made sure the empty bottle was full to the top with liquid nitrogen. He dropped it into the trash can full of water.

This time, the explosion blew out the entire side of the trash can as if it were sliced open with a knife.

Simon showed off the destroyed piece of plastic like a trophy. The only people there to see it were a few members of the press and some other scientists.

"This is exactly like Mount St. Helens erupted. Laterally," he said, still teaching.