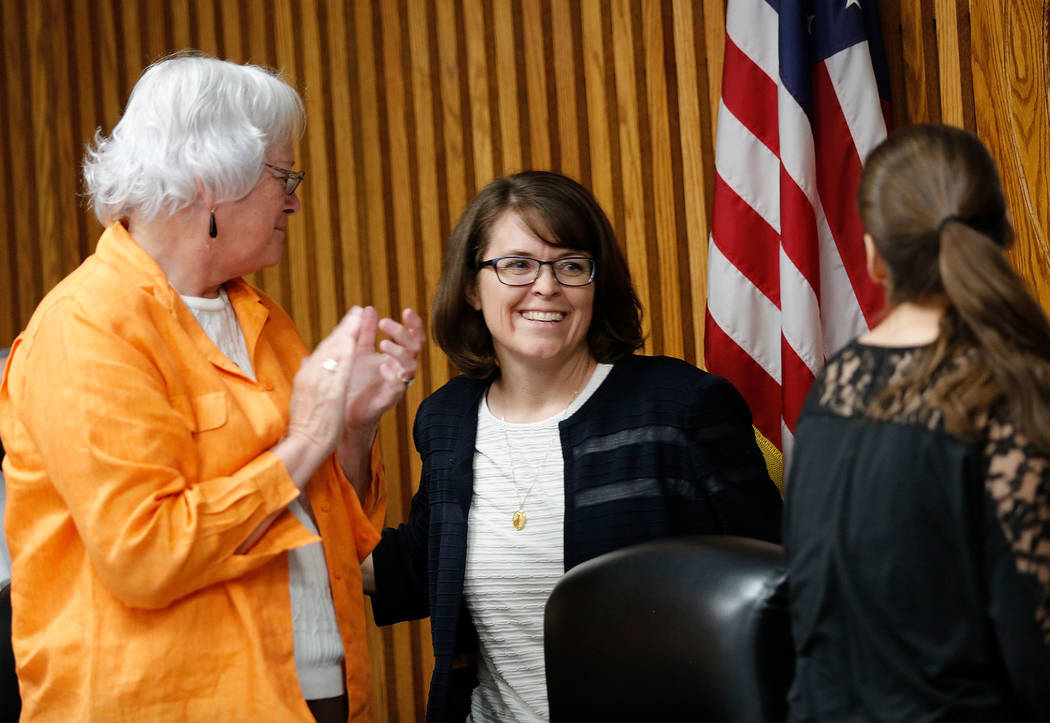 Erin Cranor, center, a member of the Clark County School Board, District G, center, is applauded by other members, Carolyn Edwards, left, and Lola Brooks during her last meeting as a board member at Edward Greer Education Center in Las Vegas, Thursday, Aug. 10, 2017. Cranor is resigning to pursue a law degree. (Chitose Suzuki/Las Vegas Review-Journal) @chitosephoto 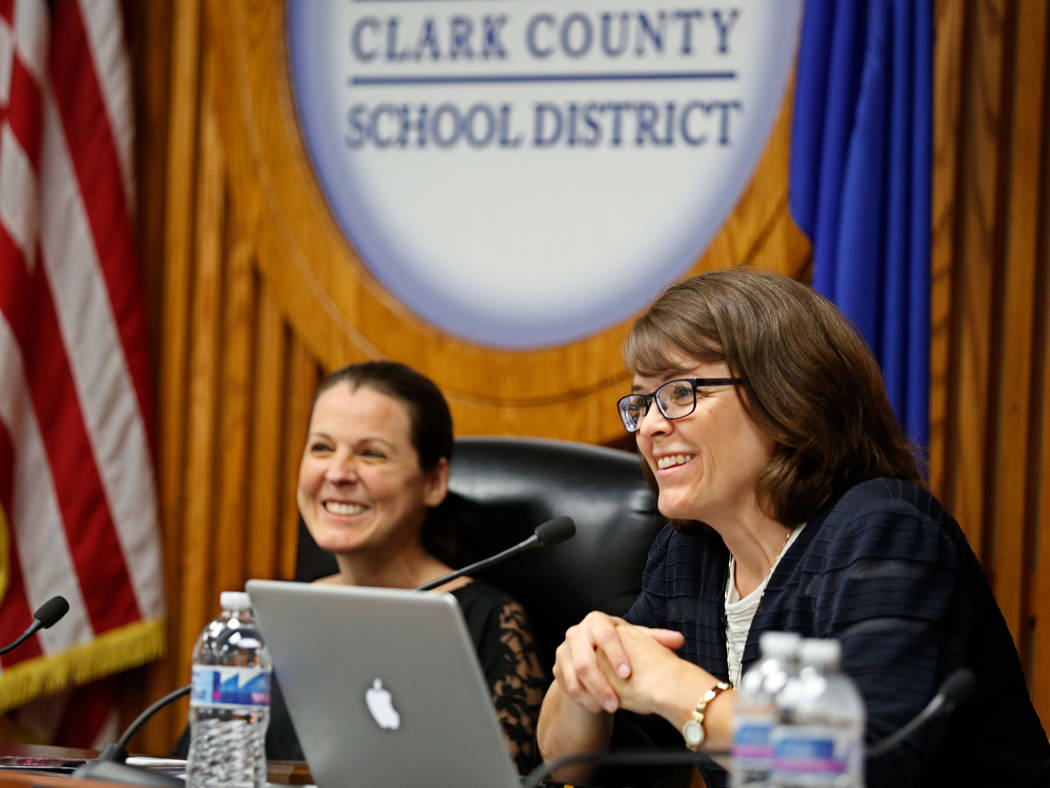 Erin Cranor, left, a member of the Clark County School Board, District G, center, right, speaks during her last meeting as a board member at Edward Greer Education Center in Las Vegas, Thursday, Aug. 10, 2017, with another member Lola Brooks. Cranor is resigning to pursue a law degree. (Chitose Suzuki/Las Vegas Review-Journal) @chitosephoto 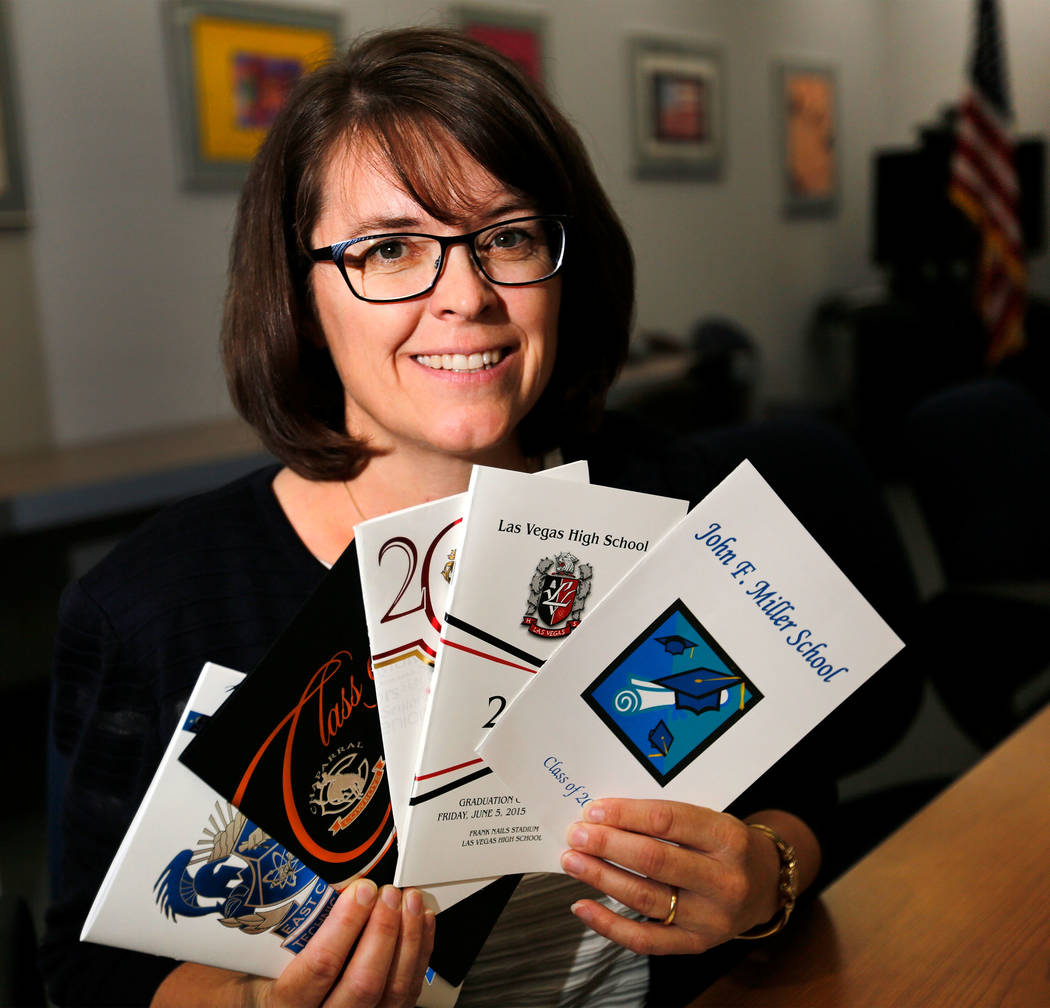 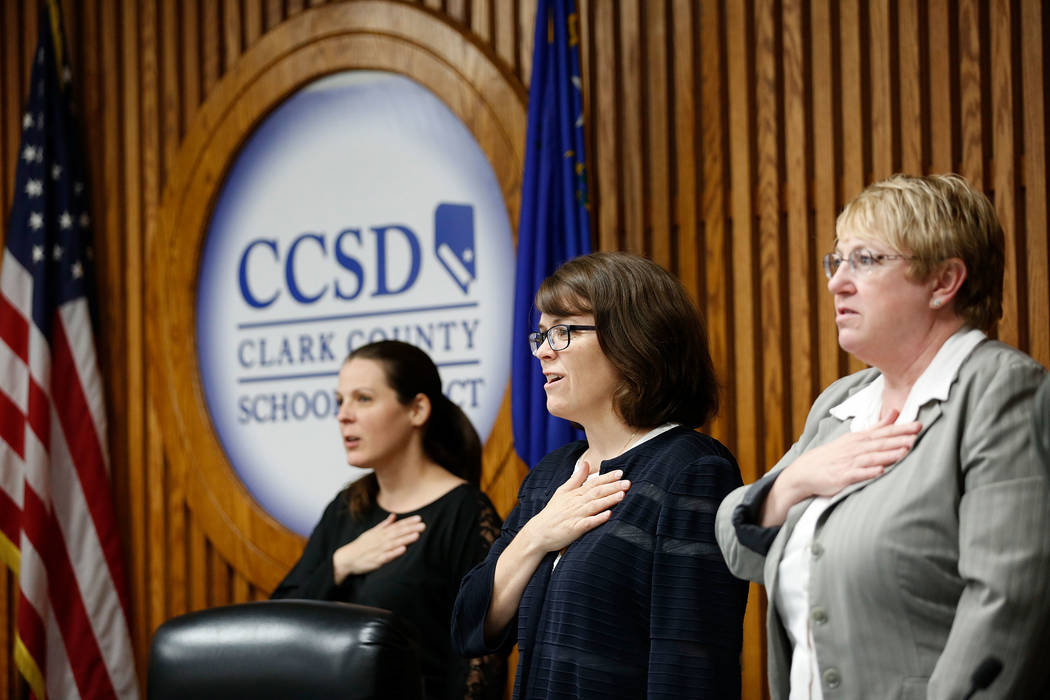 Members of the Clark County School Board including Lola Brooks, left, Erin Cranor and Chris Garvey during the Pledge of Allegiance before a meeting at Edward Greer Education Center in Las Vegas, Thursday, Aug. 10, 2017. (Chitose Suzuki/Las Vegas Review-Journal) @chitosephoto 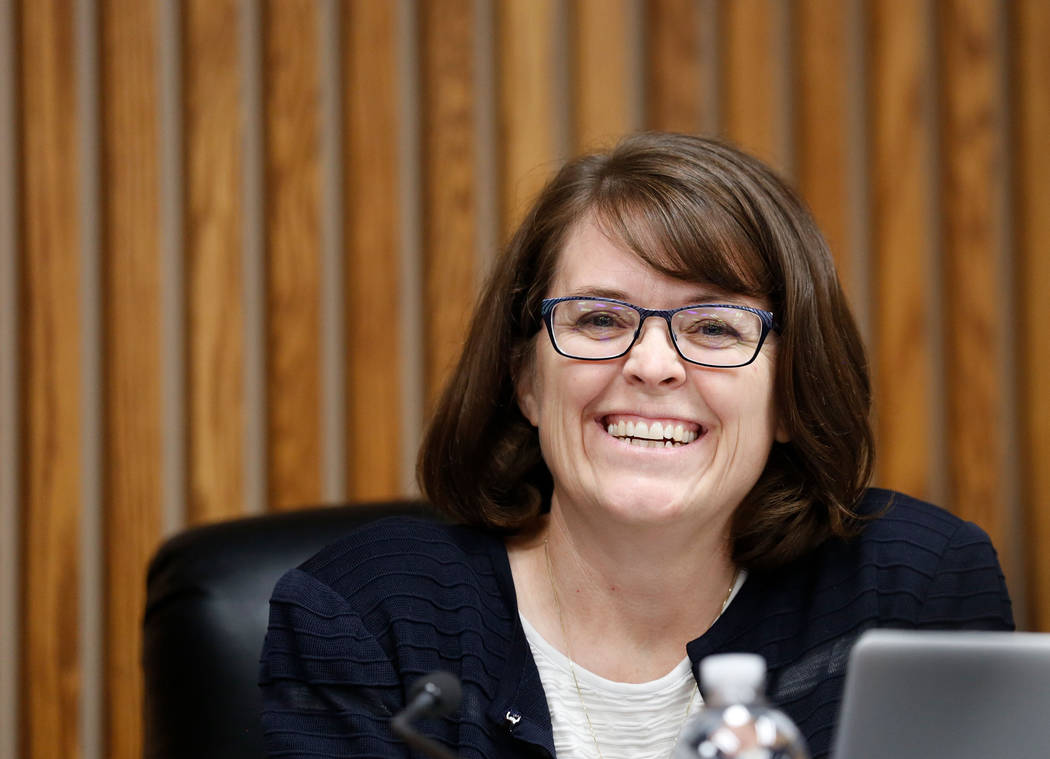 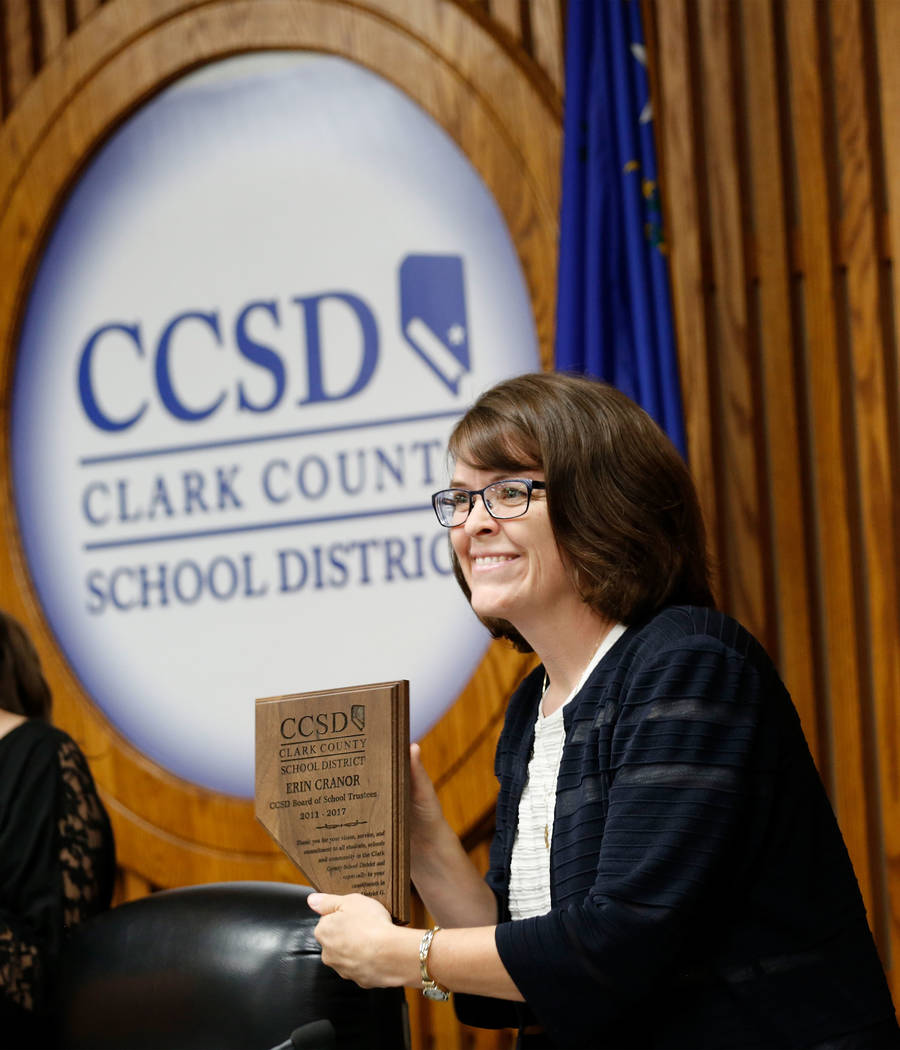 Erin Cranor, a member of the Clark County School Board, District G, receives a plaque during her last meeting as a board member at Edward Greer Education Center in Las Vegas, Thursday, Aug. 10, 2017. Cranor is resigning to pursue a law degree. (Chitose Suzuki/Las Vegas Review-Journal) @chitosephoto

It was 2011, and the effects of the economic recession were hitting schools. Officials had to find a way to cut what ultimately turned out to be $116 million in spending from a roughly $2 billion budget.

So the newly elected trustee went through the budget line by line, meticulously documenting where the money was being spent. She keeps the spiral notebook where she jotted it all down, a reminder of the painstaking groundwork that served her well during her years on the School Board.

“It was really an intense period of learning technical information and also taking in very passionate information from our community,” Cranor said. “And trying to make good decisions.”

Cranor leaves the board on Wednesday after nearly seven years representing District G, having resigned before her second term ends in December 2018 to return to school and study law.

The mother of four earned her way onto the board by being an interested parent who frequently attended School Board meetings in the early 2000s.

Cranor ran in 2010 with the support of her predecessor, Sheila Moulton, who said she made a good impression in meetings.

“I kept several of her speeches,” Moulton said, “because she’s a bright — very bright — and articulate mother and woman.”

Cranor became one of the board’s most even-keeled members. Her diplomatic style has allowed her to convey her opinion amid the heated arguments that frequently rock the board. That’s an attitude she learned from former board member Lorraine Alderman.

“There were several times in very difficult situations, for instance the recession situation, where (Lorraine) would listen and take in what was happening and be very, very cognizant and aware of what was being said without getting riled,” Cranor said.

Many in the community have appreciated Cranor’s calm demeanor.

“What I like about her most is that she doesn’t speak to hear herself talk,” said Caryne Shea of the HOPE for Nevada parent group. “She speaks with something to add to the conversation, and she listens when she needs to, and I feel like that’s a skill that’s lacking.”

But Cranor, who starts law school at Brigham Young University in the fall, had some rocky times during her tenure.

Along with the rest of the 2012 School Board, she was hit with an ethics complaint over a ballot question to raise property taxes and boost school construction. The complaint stemmed from board members advising a district secretary to send emails looking for volunteers to support the question.

The Nevada Commission on Ethics found in 2014 that the members broke state law by spending taxpayer money on campaigning.

Cranor said the board relied on the advice of the district’s attorneys in sending the email, and isn’t sure what they could have done better.

“I would definitely advocate for kids again and definitely try to help our community to understand the needs of the kids,” she said.

Drama also unfolded during her time as board president in 2014, when she was hit with a lawsuit from the district’s health plan negotiator, Business Benefits Inc. The lawsuit alleged that the district and Cranor wrongfully terminated its contract. The district later paid $100,100 to cover Cranor’s share of the settlement.

Joe Spencer, her opponent in her race for a second term, called on Cranor to resign and filed another ethics complaint against her. She still won the 2014 election with 53 percent of the vote.

Cranor remains a strong supporter of Superintendent Pat Skorkowsky, who has faced increased scrutiny from other board members during the district’s reorganization.

But her hope, she said, rests in the future.

“Things are trending in a great direction and the community is in good hands,” she said. “I will now be represented by whoever’s appointed to the District G seat … and I’m confident I’ll be happy with the way things continue to go.”