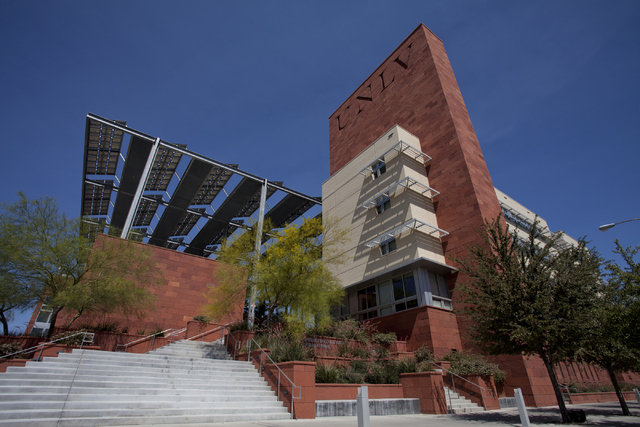 An ambitious plan to reform the Hank Greenspun School of Journalism and Media Studies, laid out in an internal document obtained by the Review-Journal, will begin this summer. The overhaul comes a year after the external study commissioned by UNLV raised concerns about weak leadership, aimless coursework and low graduation rates.

Joel Lieberman, UNLV’s criminal justice chair, will temporarily replace Director Larry Mullen, who was said to “lack an understanding of the key metrics related to enrollment, retention, graduation and budget” in the May 2015 analysis by journalism professors Marianne Barrett from Arizona State University and Dorothy Bland from the University of North Texas. Attempts to reach Mullen were unsuccessful last week.

Lieberman will begin as interim director July 1 while simultaneously running the criminal justice department. He said he’s eager to help implement a “much more dynamic curriculum.”

Following review recommendations, the school will streamline paths to graduation and get rid of some media theory classes to offer students more hands-on experience. Officials will begin updating class offerings this fall, with a growing emphasis on sports and entertainment journalism.

“Faculty have rallied around this review, which I suspected they would,” said Robert Ulmer, dean of UNLV’s Greenspun College of Urban Affairs, which oversees the journalism program. “They’re excited about the changes, and they’ve implemented — I think — a real innovative and exciting new start to the curriculum.”

Some class sizes will grow and students will take fewer required courses so they can choose more electives. Administrators said a team of faculty members drafted the new structure after consulting other departments at UNLV and journalism programs in western universities, including those at Arizona State and UNR.

The overhaul drew praise from Regent James Dean Leavitt, who sits on the 13-member Board of Regents overseeing Nevada’s public colleges and universities.

“It looks like they’re being responsive to concerns raised by the community and certainly by the Board of Regents,” Leavitt said. “From what I can tell, a lot of people are making a lot of long-needed recommendations.”

School administrators said a five-member faculty panel authored the 22-page overhaul plan using input from colleagues. The document, drafted in February, calls for a national search for a permanent replacement this fall after Lieberman takes over temporarily.

UNLV Senior Vice Provost Carl Reiber said Mullen, who has “transitioned out” of a standard three-year stint as chair, will remain at UNLV as a faculty member.

“(Mullen) was the mover and shaker behind the curricular changes,” Reiber said. “All of these changes are going to position the school for a more national, high-profile chair candidate.”

Last year’s review raised concerns that students were unable to finish their degrees within six years, noting that not enough classes were available for them to meet graduation requirements on time. The report said only 26 percent of students at the journalism school graduated on time in 2007, while UNLV as a whole had a graduation rate of 44 percent.

The authors of the overhaul plan called those figures misleading because Barrett and Bland didn’t take into account that students switch majors before graduation, but they conceded that the duo’s recommendations were justified.

Lack of academic advisers and professors was cited by journalism students as a hurdle between them and graduation. Barrett and Bland’s review said the program employs only two advisers to work with 2,500 students — a ratio far below standards established by the National Academic Advising Association. The journalism program lists 22 employees and three part-time instructors on its website.

“Specifically, I would like to see more diverse faculty as a first-generation American,” Gil said, emphasizing another concern raised in last year’s review.

Reiber credited Ulmer for noting the staffing shortage when he became dean in 2014 — shortly after taking the helm, Ulmer requested the transfer of a UNLV adviser to the journalism program. Since the external review’s release, the school has hired 16 part-time instructors and at least two full-time faculty members, including Jon Castagnino, a former sports reporter at KVVU-TV (Channel 5) in Las Vegas.

But the university has struggled to meet demand for advisers university-wide, Reiber said. He noted that Barrett and Bland’s review came on the heels of a recession that slashed funding for colleges statewide.

“We do recognize we need more,” Reiber said.

Concerns about the shortage were repeated in February’s faculty-authored plan, which noted the program “will be severely shorthanded in 2016-2017 without additional hires.”

“Leadership in journalism education is one of the biggest challenges we face,” said Susanne Shaw, executive director for the Accrediting Council on Education in Journalism and Mass Communications. “It’s difficult searching for and hiring people.”