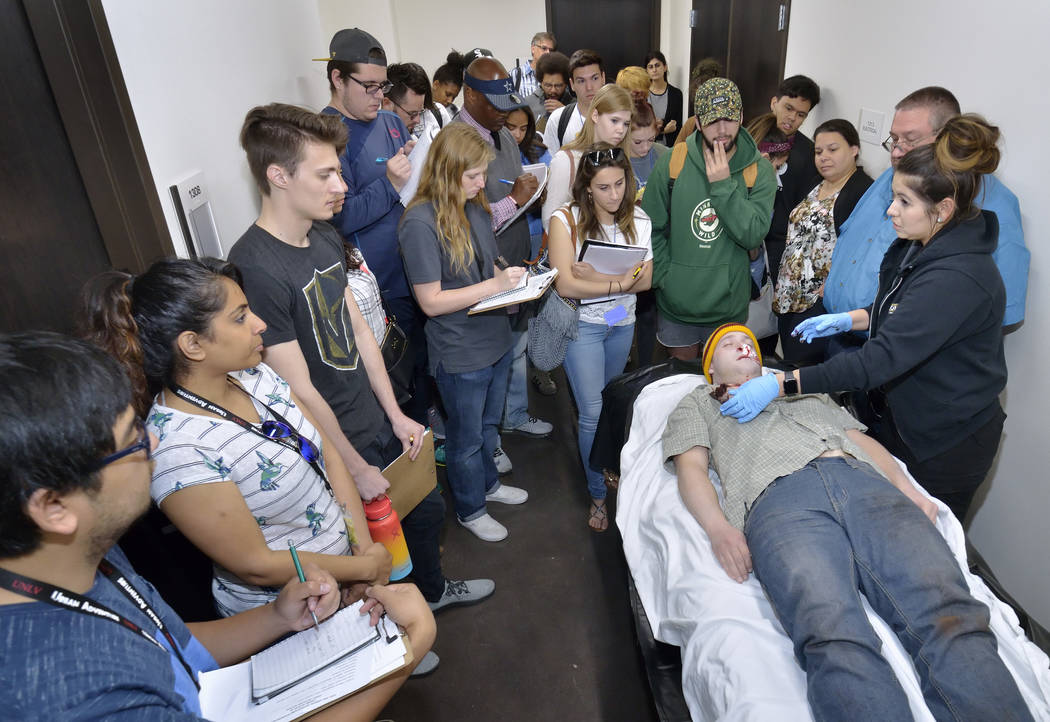 Roz Florez, an investigator with the Clark County coronerճ office, right, talks with students during a simulated homicide investigation for a class called Urban Adventure at Greenspun Hall on the UNLV campus at 4505 S. Maryland Parkway in Las Vegas on Friday, March 29, 2019. (Bill Hughes/Las Vegas Review-Journal) 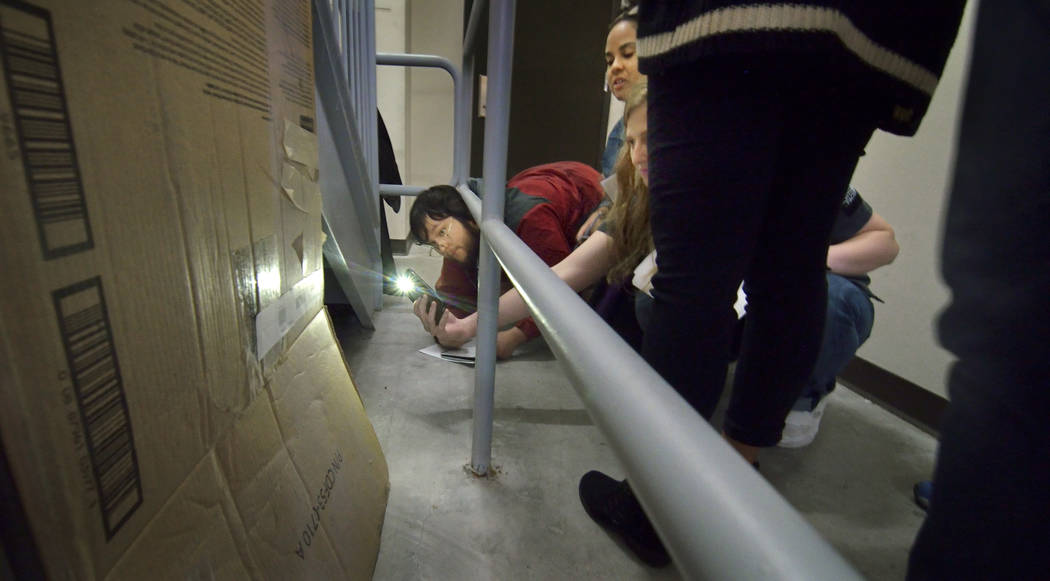 Students check out part of a crime scene during a simulated homicide investigation for a class called Urban Adventure at Greenspun Hall on the UNLV campus at 4505 S. Maryland Parkway in Las Vegas on Friday, March 29, 2019. (Bill Hughes/Las Vegas Review-Journal) 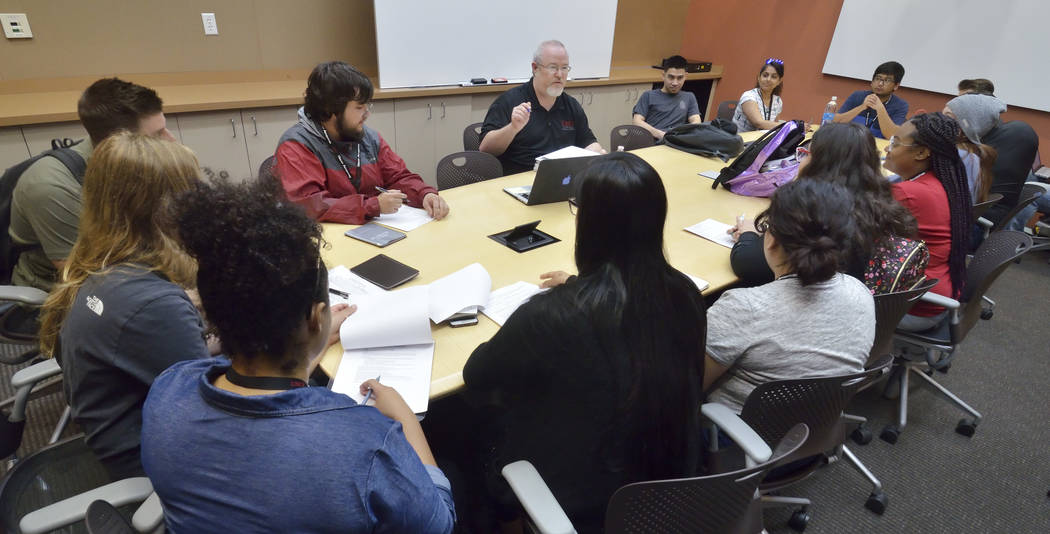 Lecturer Darwin Morgan, background center, talks with students during a briefing for a simulated homicide investigation in a class called Urban Adventure at Greenspun Hall on the UNLV campus at 4505 S. Maryland Parkway in Las Vegas on Friday, March 29, 2019. (Bill Hughes/Las Vegas Review-Journal) 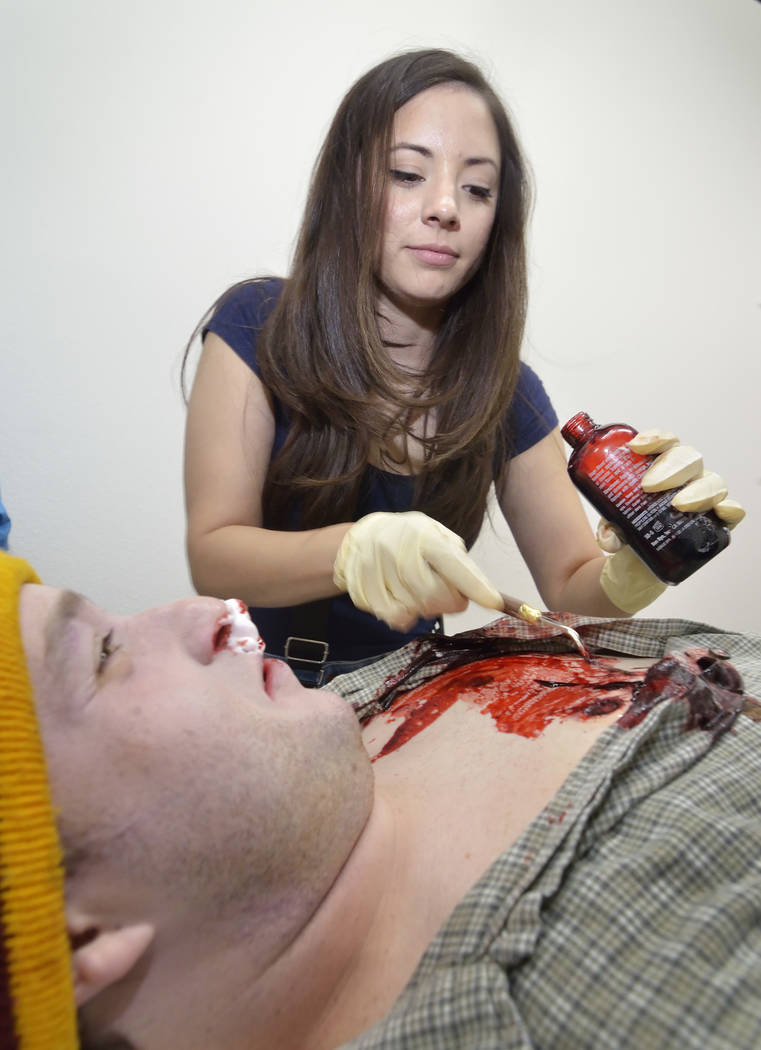 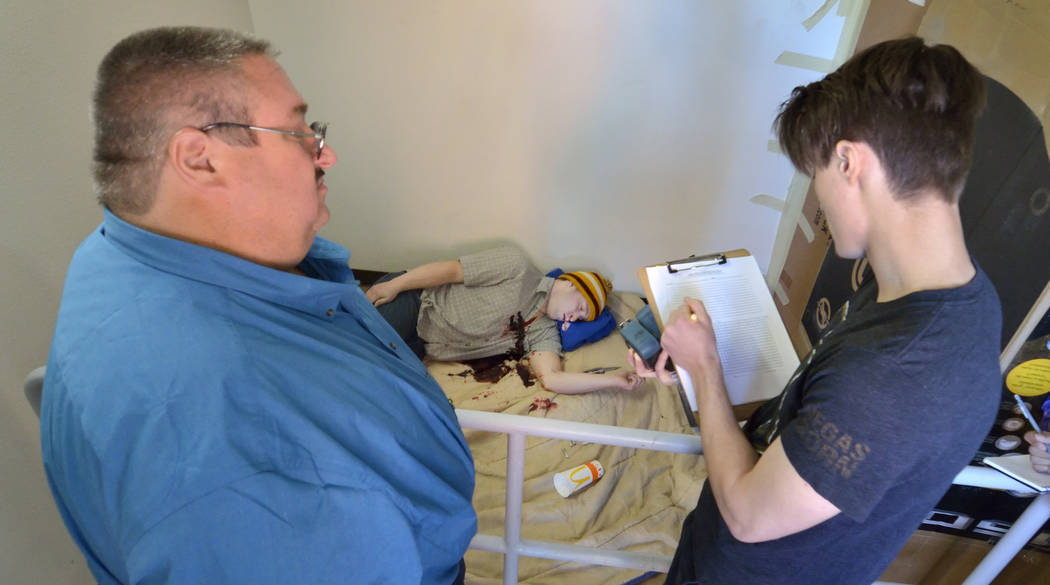 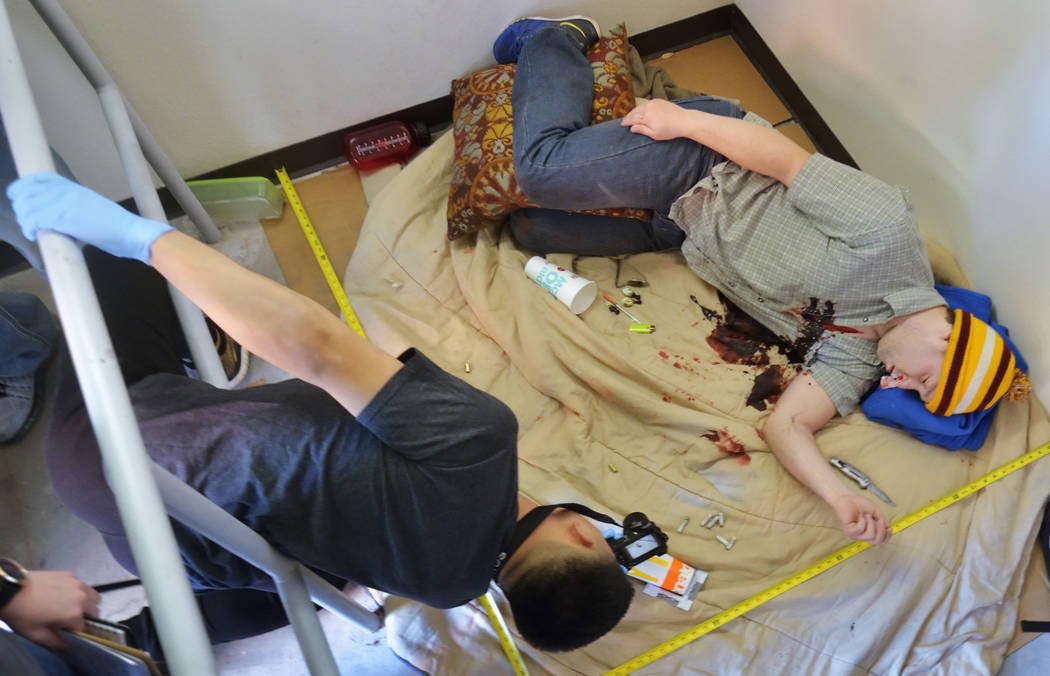 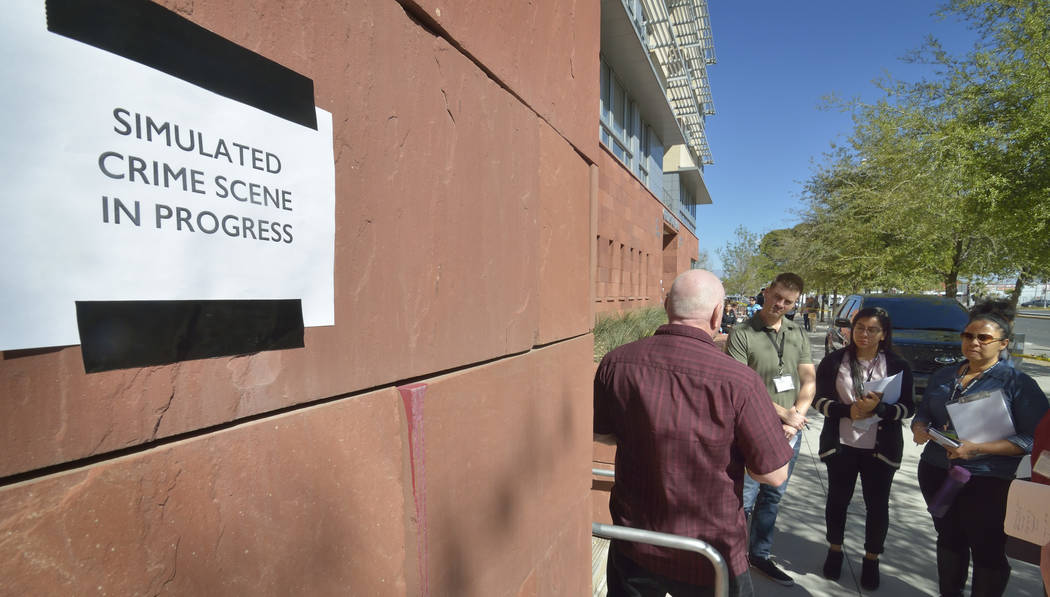 But these aren’t professionals, and the dead man lying in a stairwell at UNLV’s Greenspun College of Urban Affairs is still breathing. Students from every discipline at the college are working together to investigate two fictional murders from start to finish.

About 70 students majoring in criminal justice, social work, communications and public policy and leadership are involved in the hands-on urban adventures class this semester, Bawany said.

On Friday, a group of criminal justice students sat in a conference room and listened to a fictional 911 call and police radio traffic. A woman reported finding her friend covered in blood and unresponsive at the Greenspun building.

Five students chosen as leaders on the case crowded into a stairwell where an actor was lying motionless on the floor with fake blood smeared across his chest. They then directed the rest of the group, who worked the scene as detectives and crime scene investigators.

“We want students active and engaged in the learning process,” said Robert Ulmer, dean of the college. “Students are really getting a first-class education at the college and at UNLV.”

It took months of planning and about 100 faculty, staff and members of the community to create the class curriculum and content, Bawany said.

Experts, such as retired Metropolitan Police Department Sgt. Jim Young, helped develop the class and supervised the students while they worked.

The new class is part of a third-year seminar that all juniors in the school are required to take. Students investigated three crime scenes over the past three weeks. At the first, they discovered a woman dead in her car. The second scene was the apartment where the woman’s boyfriend lived.

Criminal justice students will have to determine whether the two scenes are related and identify a suspect. Social work students considered the scenes from different perspectives and spoke to witnesses. Both of the homicide victims were homeless, and domestic abuse plays a part in the narrative of the case.

“We want them to understand that homelessness isn’t just a man pushing a cart,” said Joel Lieberman, chairman of the criminal justice department.

To make the crime scene more realistic, students from a journalism class were dispatched to gather information and report on the homicide.

At Friday’s scene, Alisha Bleakley, 34, a junior majoring in communication studies, acted as the liaison between the investigators and the press. She spoke to student reporters during two press conferences near the crime scene.

“I would never retain this information from a book,” Bleakley said. She said she’s learned more than she expected about her own major and the other schools in the urban affairs college.

An hour into the class, students working as detectives interviewed “witnesses.” When an argument broke out between two witnesses, journalism students recorded the confrontation on their cellphones.

Inside, Clark County coroner’s office investigator Roz Flores told students what she could deduce from the injuries on the victim’s body, then showed how to photograph the wounds for evidence.

At the end of class, subject matter experts critiqued the criminal justice students’ performance. Young said the initial response was slow, but ultimately the team did well.

After the criminal justice team finishes its investigation, it will send its findings to students at the Boyd School of Law, who will prosecute the case in a mock trial in May.