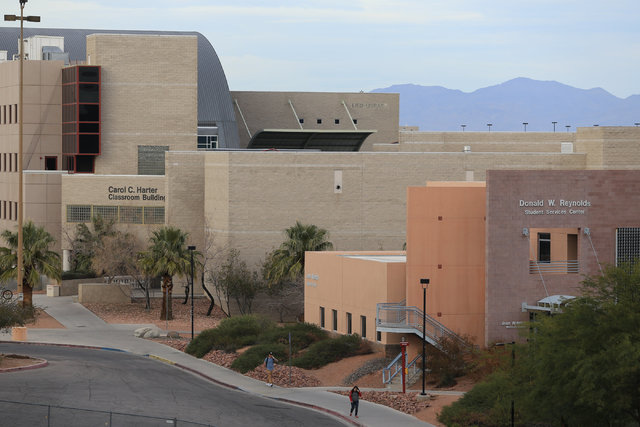 Students walk across campus at UNLV on Thursday, Feb. 9, 2017, in Las Vegas. UNLV has suspended the Delta Zeta sorority until fall 2019 for hazing and other incidents. (Brett Le Blanc/Las Vegas Review-Journal) @bleblancphoto

The University of Nevada, Las Vegas has suspended the Delta Zeta sorority as an active campus organization until fall 2019 for hazing and other incidents.

“Delta Zeta strongly values our partnership with each host institution in which we are a guest on the campus, and we expect our members to uphold our values and the ideals we were founded on in 1902, and that still hold true today — a premier global network of inspired women who share a vision to truly change the world through leadership, service and philanthropy,” Delta Zeta National President Diane Stecher said in a statement.

Although the suspension came from the university, the Delta Zeta National Council confirmed the suspension. It requested a return to the campus for fall 2020, “if the climate for a successful return is suitable.”

“Delta Zeta Sorority’s National Council has suspended its Iota Phi Chapter at (UNLV) as a result of incidents inconsistent with the sorority’s values,” Stecher said. “The sorority fosters the respect and worth of self and of others, and does not condone hazing. Delta Zeta is committed to its eradication.”

UNLV spokesman Francis McCabe would not comment on the matter other than to say that the university “does not condone or tolerate hazing as clearly stated under our student conduct code.”

According to the university’s policy, student consent to hazing is not a legal defense, and all actions that could be interpreted as hazing should be “strongly analyzed.”

“While it is always a difficult decision to suspend a chapter, we are firm in adhering to our policies which are in place for the safety and well-being of each member of our sorority,” Stecher said in her statement. “We firmly believe the actions of our members on any campus should inspire and uplift our members to be global leaders and can assure you that we do not condone the actions of the Iota Phi Chapter.”

An email seeking comment sent to the local chapter president of Delta Zeta came back as undeliverable.