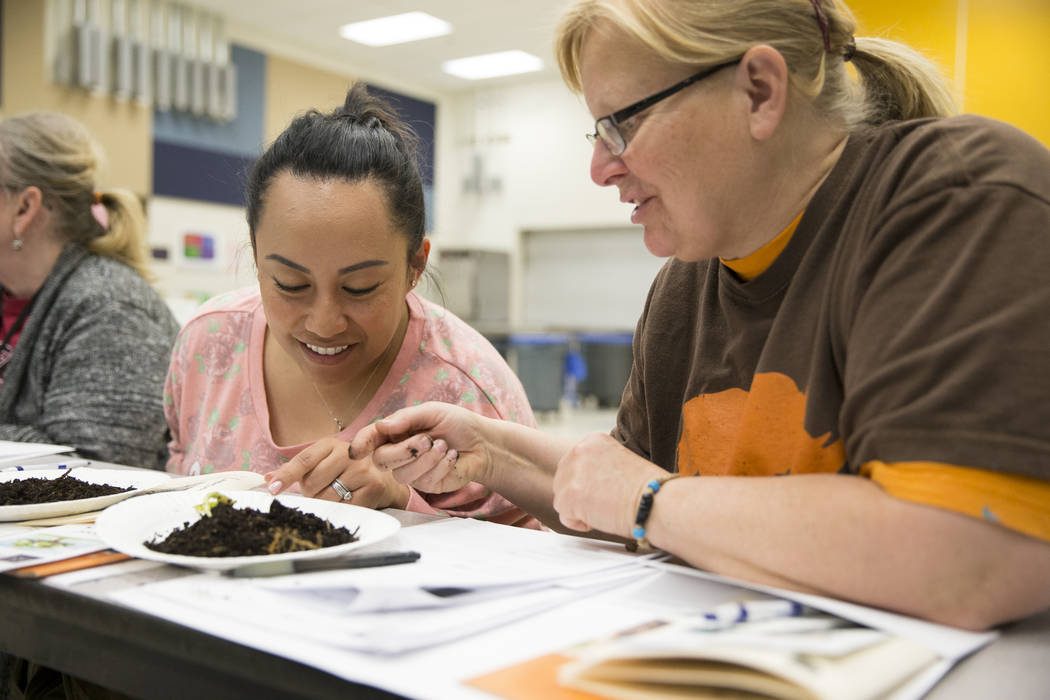 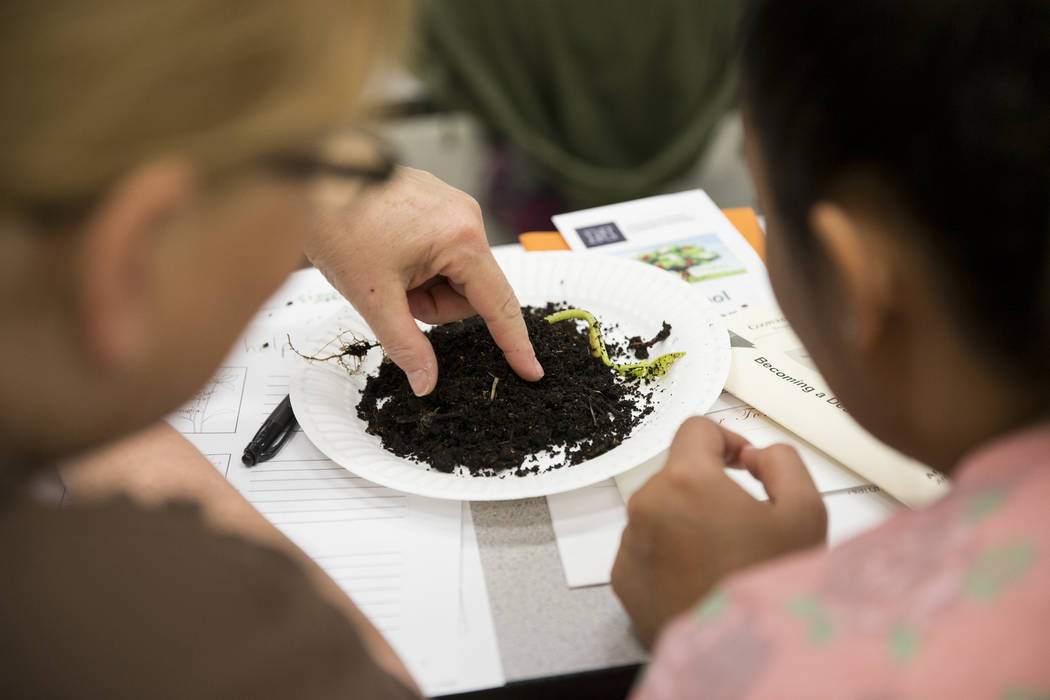 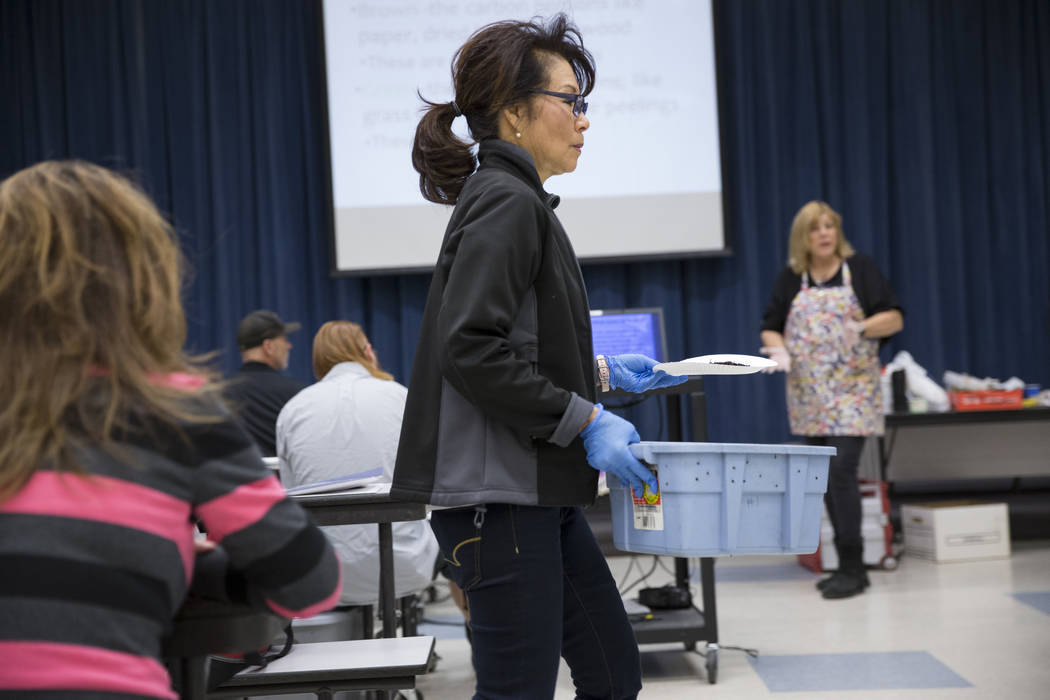 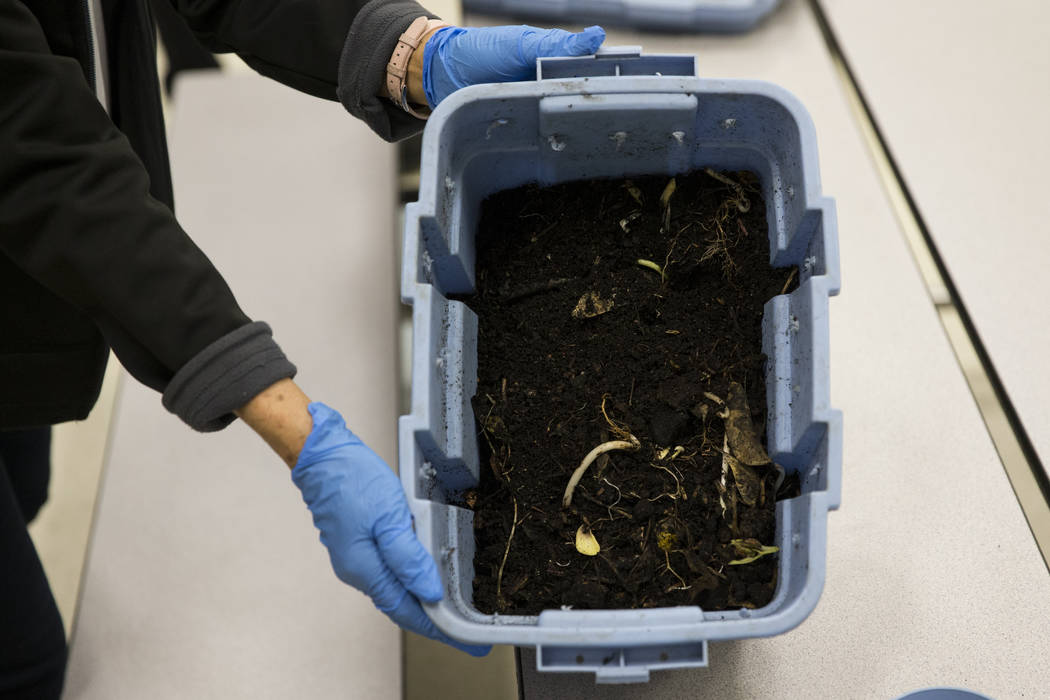 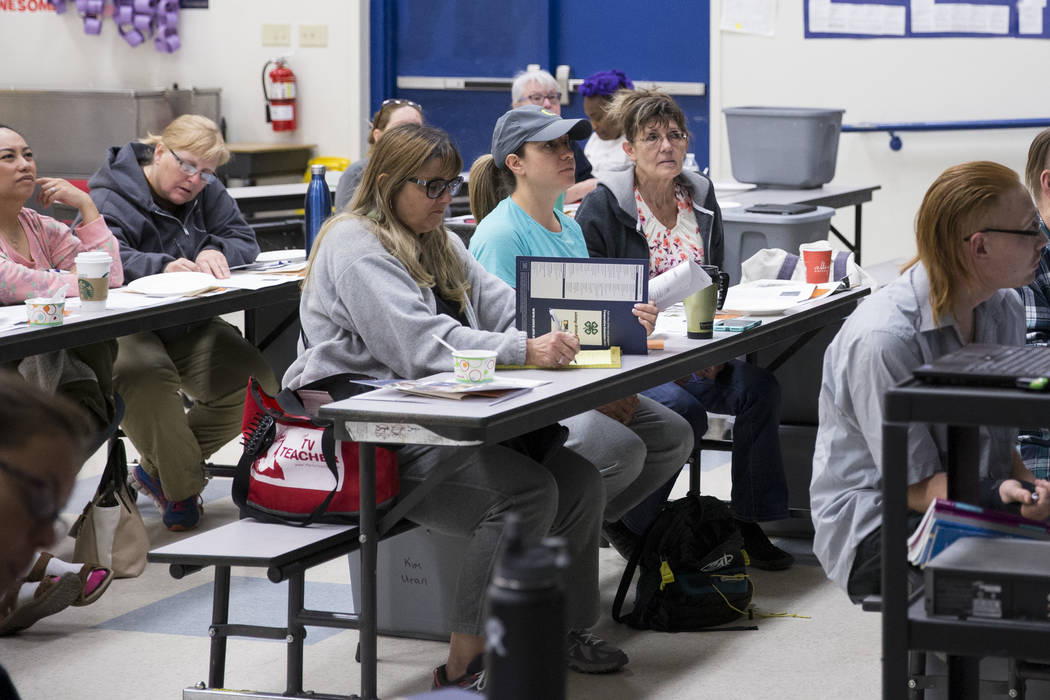 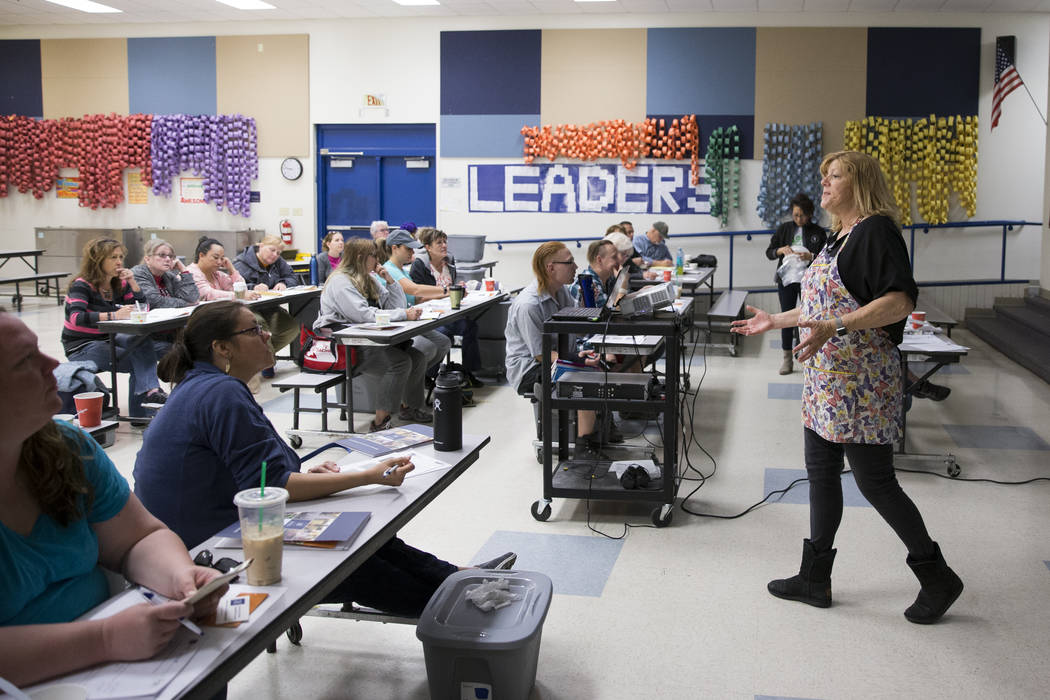 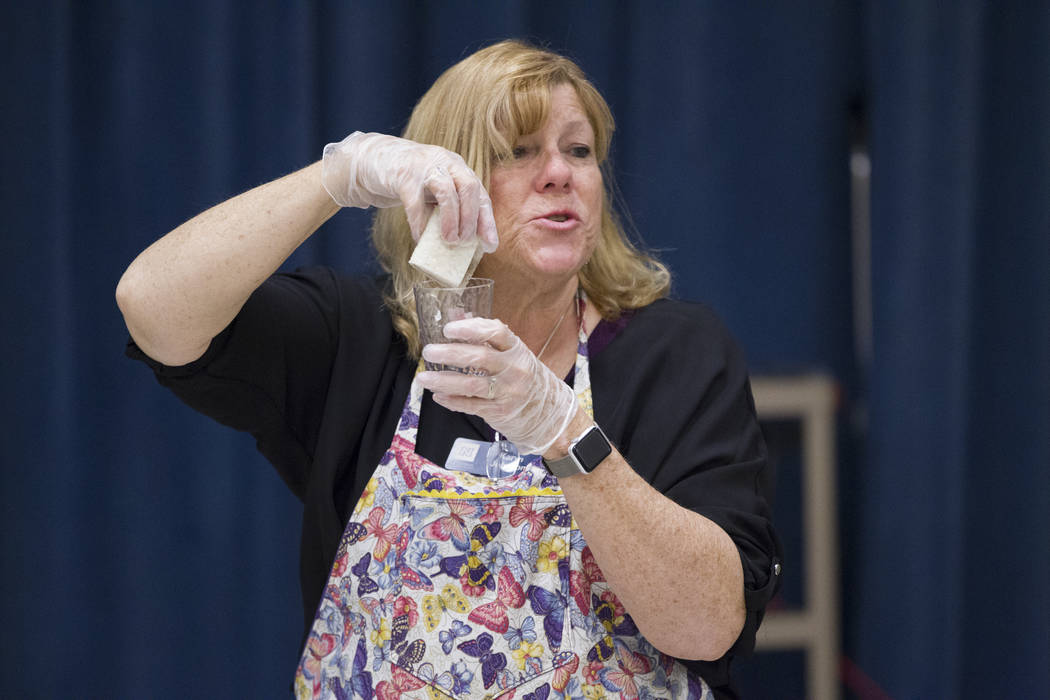 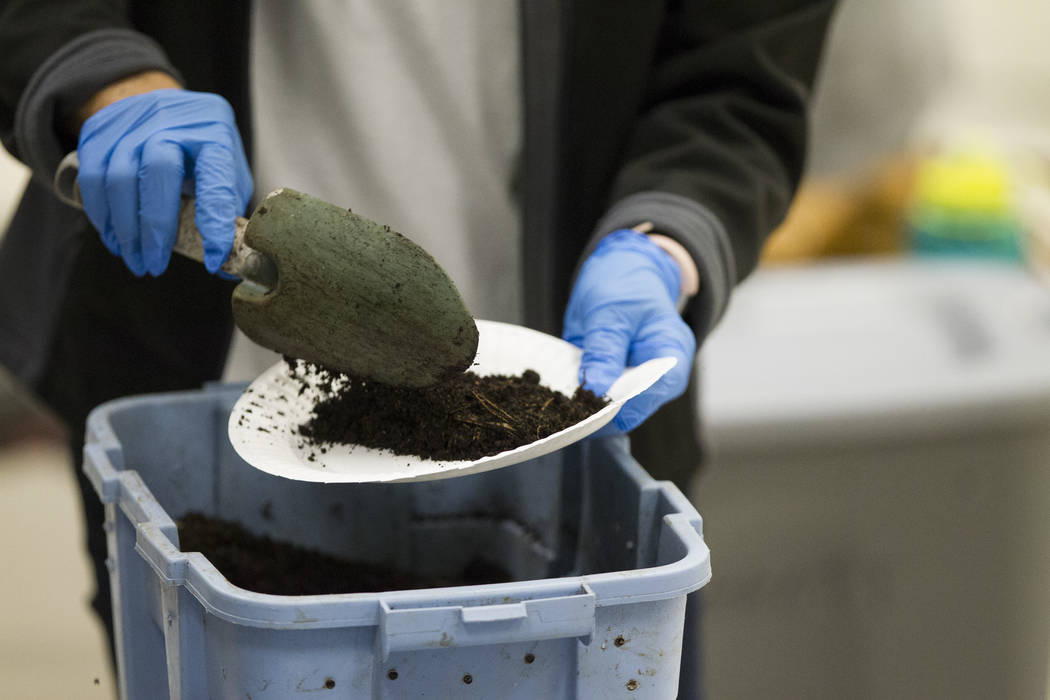 Move over guinea pigs, there’s a new class pet in town. They may not be furry or conventionally cute, but they do wiggle.

Red wigglers were the center of attention Saturday morning at Lake Elementary School, where about 30 teachers and educators got down and dirty to learn about the art of vermicomposting — otherwise known as composting with worms.

“Learning how to compost with worms not only helps spread the word about better nutrition, but it’s sustainable,” said Karyn Johnson, school gardens program coordinator at the University of Nevada Cooperative Extension. “Pretty much everything that comes from someone’s kitchen is fair game for them. They can eat their body weight in food every day.”

Through a partnership with the local nonprofit Green Our Planet and the University Nevada Cooperative Extension, participants were taught how to build “worm hotels.”

Each participant had a starting bin with newspaper, cardboard, coconut fiber, coffee grounds and kitchen scrapes along with roughly 250 worms. Food scraps and yard waste make up 20 to 30 percent of what people throw away, according to the U. S. Environmental Protection Agency.

Emily Beamguard, school garden coordinator and farmer with the nonprofit, said red wigglers help the environment because their castings, otherwise known as worm poop, can be turned into nutrients for plant growth.

Worm castings look like small bumpy balls, which can be scattered around the garden or on household plants.

Bev Patton, program manager at Green Our Planet, said the composting class is part of a larger curriculum that integrates STEM (science, technology, engineering and mathematics), health and nutrition into the classroom through gardening.

The school garden program is in use at more than 100 schools in Southern Nevada, Patton said.

“Students who participate in this program have a better outlook on nutrition and sustainability and conservation,” Patton said. “Obesity is an epidemic, so to be able to change their eating habits is huge. Bringing gardens to a school is one of the best and easiest ways to transform some of the problems children face in the 21st century.”

Through vermicomposting children learn about the connection between the worms and soil and how it’s part of a food web, Patton said.

“A huge amount of food can be composted instead of being sent to the landfill,” Beamguard said. “Learning how to compost with worms is just another tool for teachers, so that they can teach their students about recycling, gardening and helping the environment.”

The only foods to avoid feeding these invertebrate animals are acidic and spicy foods — which they don’t like — such as citrus, garlic, onions and peppers. Dairy products, eggs and meat should also be avoided because they smell and attract vermin, such as rats.

Composting with worms works best in a temperature range of 50 to 70 degrees Fahrenheit, Beamguard said, which is why it’s best to place the bin under the kitchen sink or inside a classroom.

Participants also learned how to make “worm tea,” which consists of worm castings mixed with chlorine-free water that can be sprayed on sick plants to help perk them up.

Vanessa Galvan, a Lake Elementary School teacher and an event participant, said the school started a garden about two years ago and has experimented with growing red lettuce and cabbage.

“Students have learned how to eat healthier as a result of the garden,” Galvan said. “They’re really dedicated to caring for it and it’s become a relaxing atmosphere for them. Most of us teachers are really learning as we go.”

She added that her students are excited to have worms inside their classroom.

What’s the best part about this new classroom pet? They don’t bite.

“Red wigglers tickle more than anything,” Beamguard said. “They don’t have anything toxic associated with them. They’re really the perfect classroom pet.”