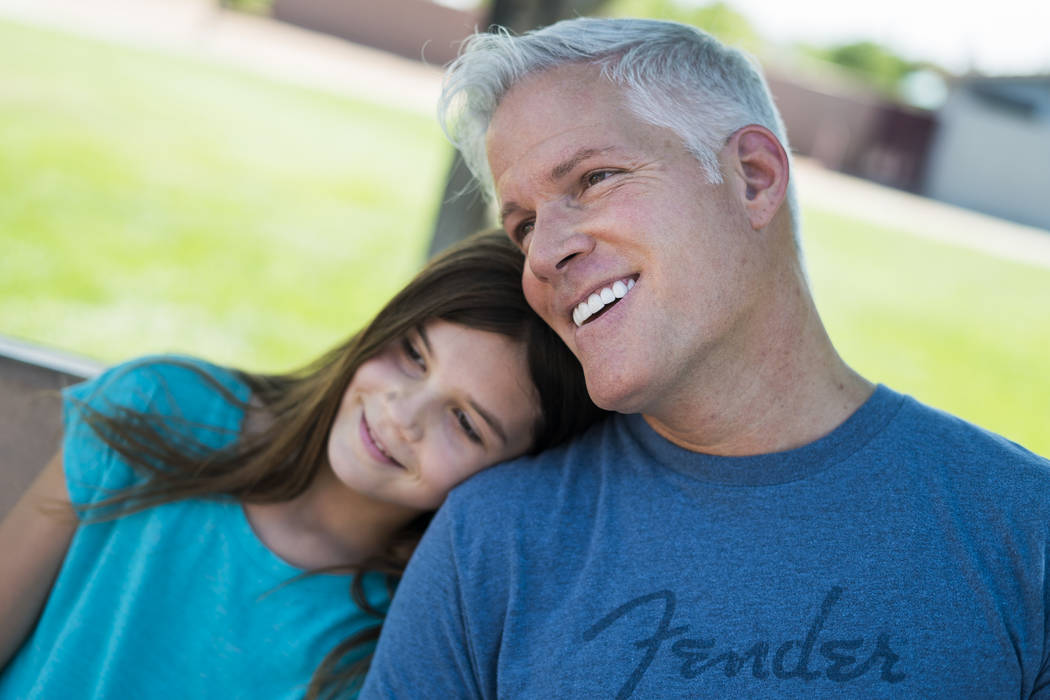 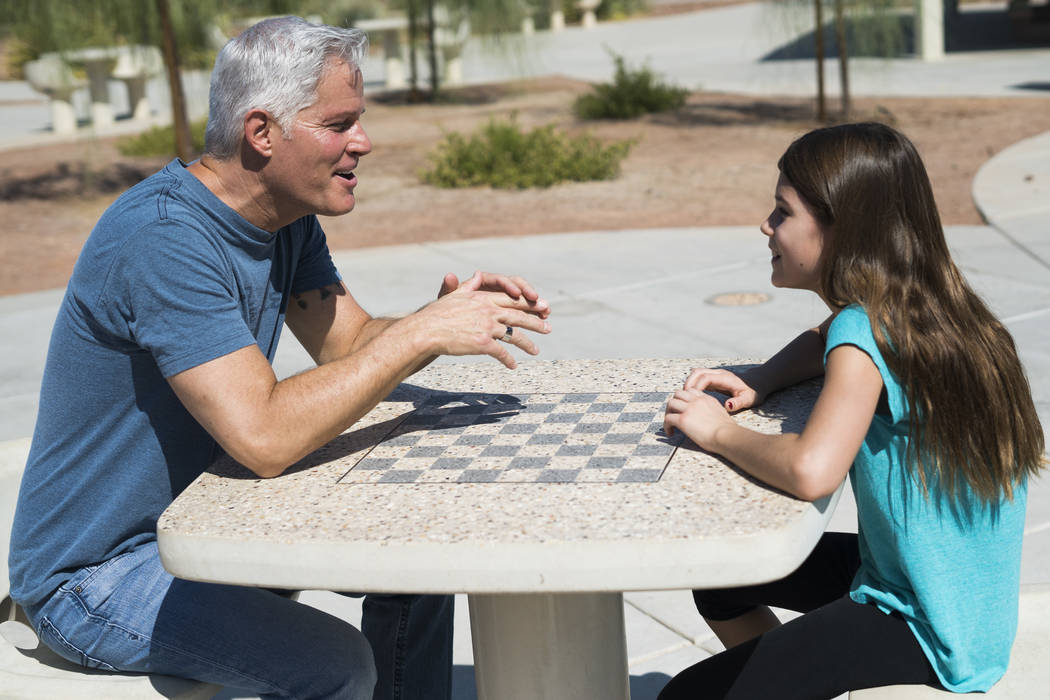 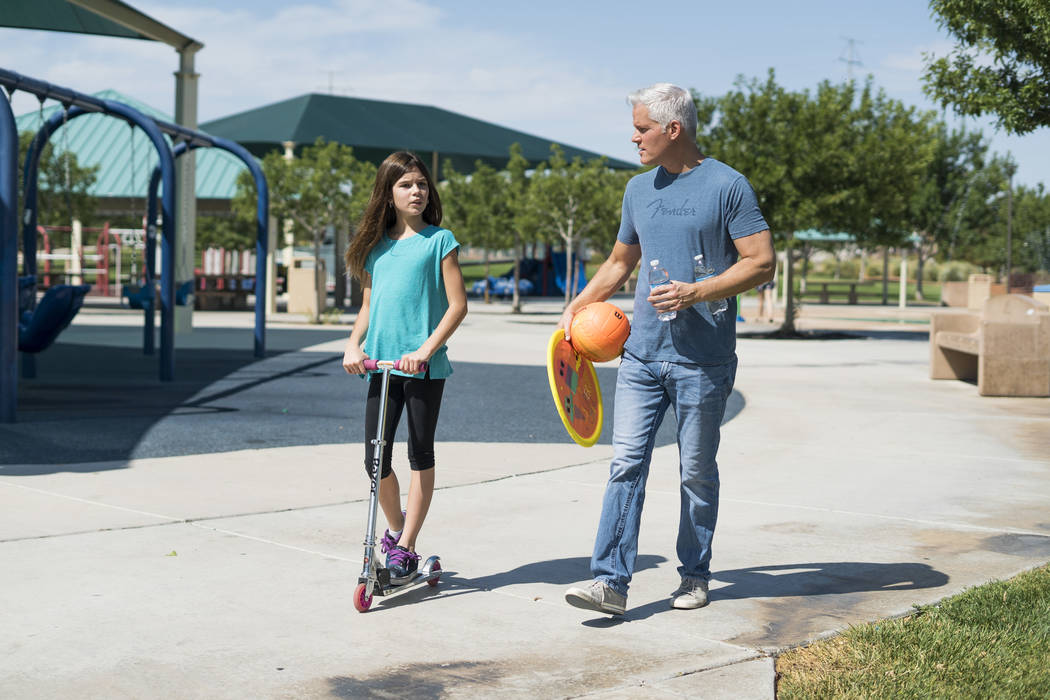 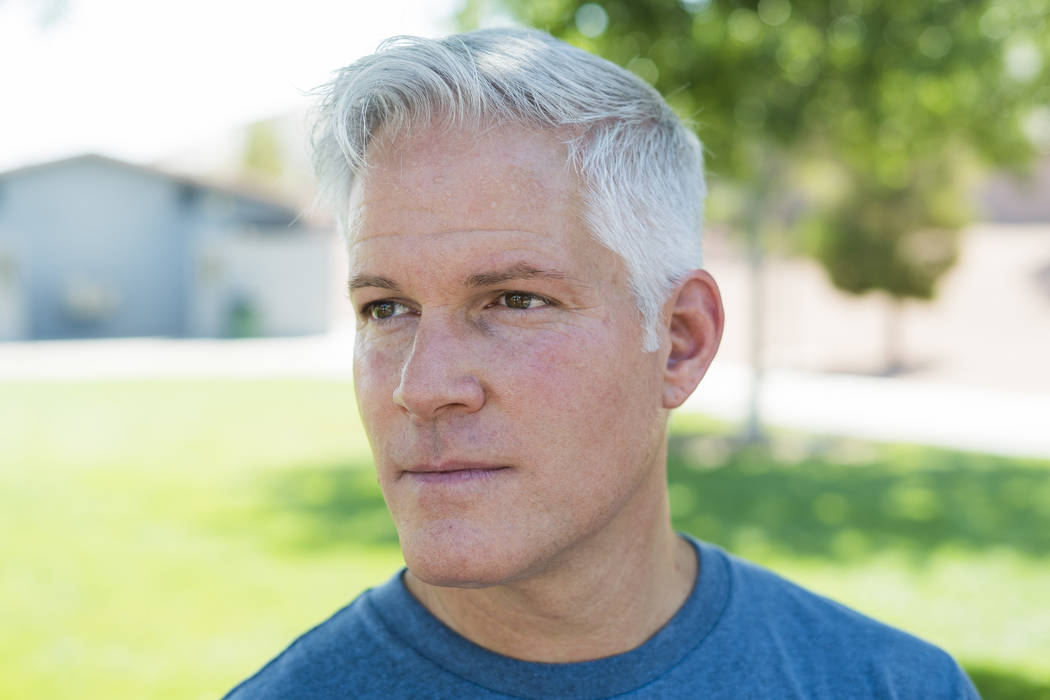 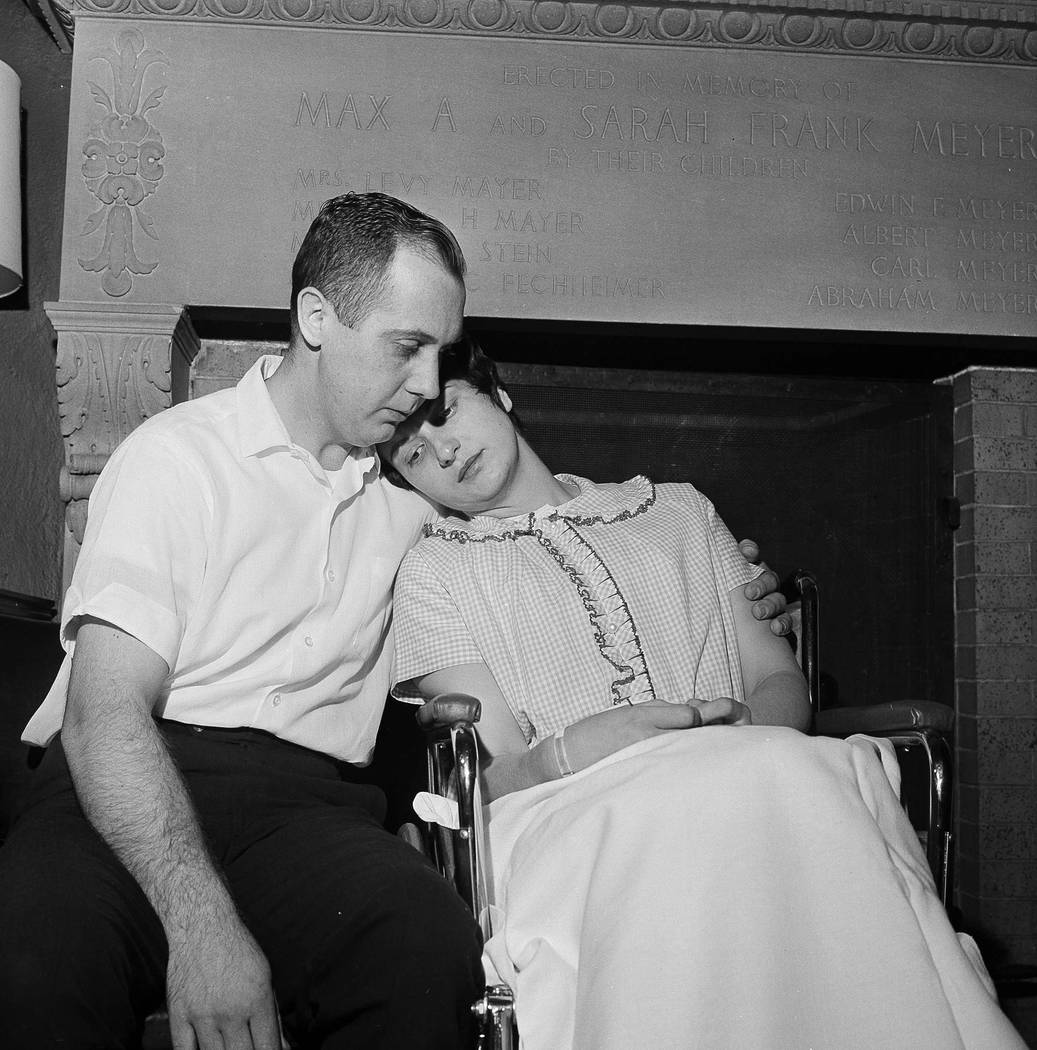 Chester and Dora Fronczak are pictured at a news conference in Michael Reese Hospital in Chicago, April 30, 1964. Couple seeks return of infant son, Paul Joseph Fronczak, who was taken from his mother's arms by a woman in a nurse's uniform, but was not returned to the nursery. The boy was born on April 26 and kidnapped on the 27th. (AP Photo/LO) 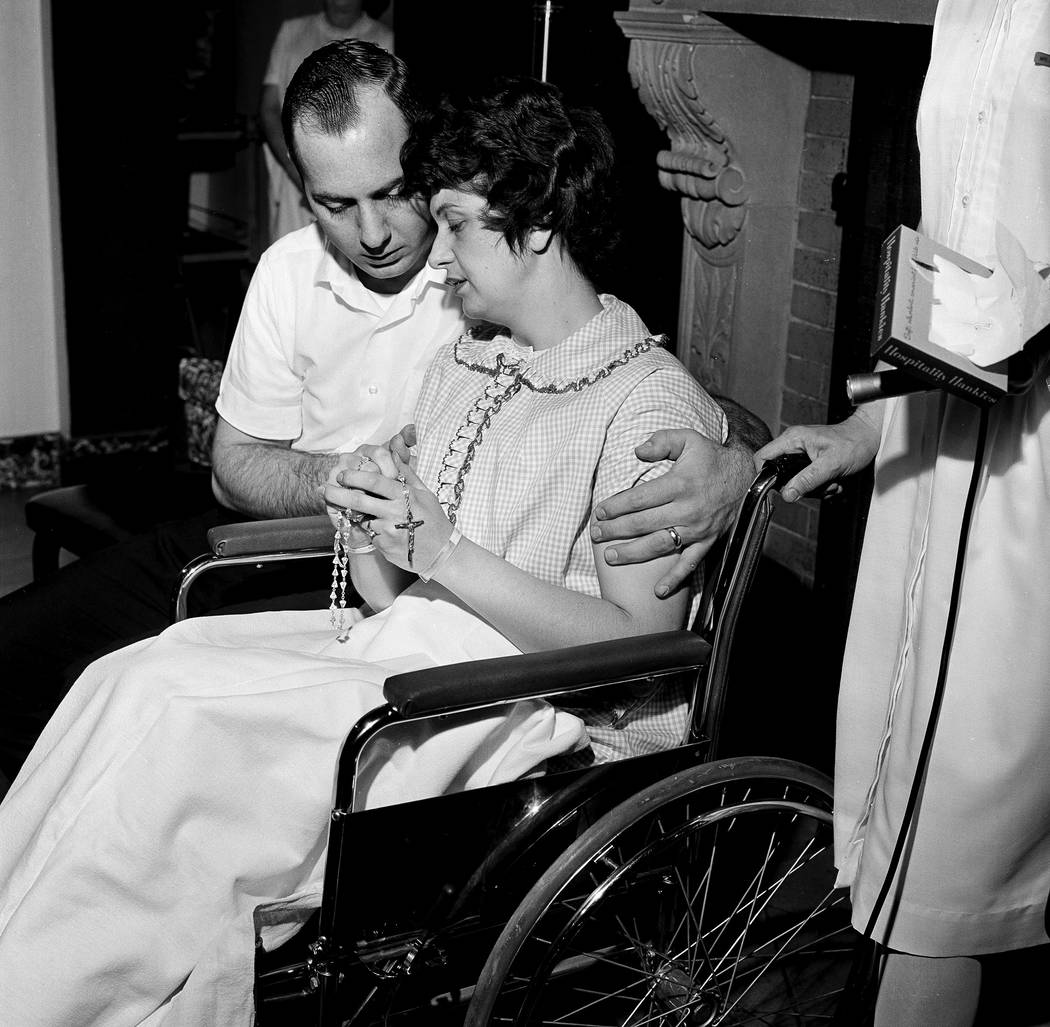 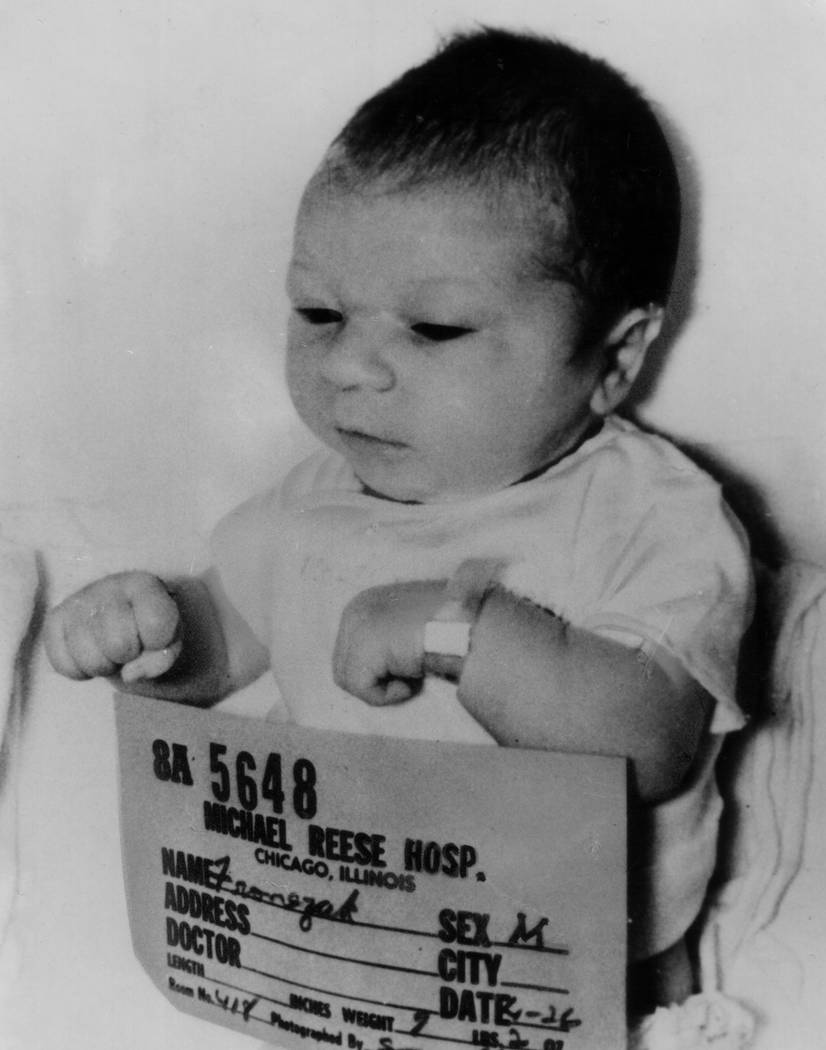 New-born Paul Joseph Fronczak is shown April 26, 1964, shortly after his birth at Michael Reese Hospital in Chicago. The baby was taken from his mother's arms by a woman dressed as a nurse who told her he needed a medical exam and then never returned him to the nursery. (AP Photo)

Paul Fronczak is not the man he thought he was.

That’s because six years ago, when he was just shy of 50, the Henderson resident found out his name was Jack Rosenthal and that he had been raised by a family that wasn’t his own after being mistaken for their kidnapped infant.

The strange tale of identity confusion doesn’t end there. Now he’s searching for the real Paul Fronczak, even as he continues to use his name, along with a long-missing twin sister he never knew he had.

The story dates to April 27, 1964, when a new mom handed her 1-day-old baby to a woman dressed as a nurse in a Chicago hospital. The woman walked out of the room and was never seen again.

“BABY STOLEN AT HOSPITAL” screamed the headline on the Chicago Tribune’s front page the next day. Baby Paul had gone missing, setting off a massive FBI investigation.

The search ground on for more than a year without developing any substantial leads until an abandoned baby was located in front of a department store in Newark, New Jersey, in July 1965. A foster family baptized him as Scott McKinley.

But the discovery drew the interest of an FBI agent, who decided the shape of the boy’s ear matched a photo taken of a day-old baby a year earlier at the hospital in Chicago.

In no time, FBI agents presented Baby McKinley to Chester and Dora Fronczak.

“All of a sudden, they’re saying, ‘This is your son,’ the FBI, who you look up to as an authority,” Fronczak explained recently. “And my mom said the world was watching, and she could either say, ‘No, that’s not my son. Put this kid back in the system. Who knows what’s going to happen to him?’ And then have regrets because it could’ve been Paul.”

So she agreed the baby was her son, and Fronczak grew up as, well, a Fronczak. When he found articles detailing the kidnapping in the crawl space of the family home when he was 10, his parents forbade him from mentioning it again.

To a 10-year-old, it was nothing more than a cool story, said Fronczak, now a college counselor who has lived in the Las Vegas Valley since 1995.

“I was happy, you know?” said the recently divorced and silver-haired 54-year-old. “But then as I started getting older, I started realizing, ‘I don’t think I’m the real Paul.’ ”

For decades, the question was merely a nagging thought in the back of his mind.

Then, in 2009, Fronczak became a father, and the curiosity became a strong desire to understand his own history — especially medical — for the benefit of his daughter, Emma, now 9.

Three years later, Fronczak saw a $28 DNA testing kit while shopping at CVS. What had seemed so inaccessible before because of the high cost of DNA testing was now staring him in the face.

Fronczak kept the kit in his closet until his parents flew in from Chicago for a visit. In the last two hours of their weeklong trip, he found the courage to broach the subject.

“So I said, ‘Hey, mom, did you ever wonder if I was really your child?’ ” Fronczak remembered. His mom’s immediate response was, “Well, you’re my son.”

He gently pressed on: “What if you had a way to find out? Would you do it?”

The Fronczaks all agreed. Paul brought the testing kit to the table. They swabbed their cheeks and sealed the envelope — and their fate.

The drive to the airport took “four years,” Fronczak said. No one talked.

By the time his parents landed in Chicago, they’d had a change of heart and asked him not to mail the kit. They didn’t want to know. His father has since died, and his mother has denied all interview requests.

But Fronczak had already made up his mind. He kept the kit in a desk drawer for two weeks, but one day he pulled it out, walked across the street and shoved it into a mailbox.

“And I never looked back,” he said.

The call came in October 2012, while Fronczak was at work. He sat, shocked and silent, as a man on the other end of the line told him, “There’s no remote possibility you’re Paul Fronczak,” he remembers. About a year later the FBI announced it had reopened the kidnapping case.

Since that moment, Fronczak has searched for the real Paul. He also worked with genetic genealogist CeCe Moore, founder of the DNA Detectives, to determine his true identity.

His case was “extremely difficult” to solve, Moore said of the two years it took to compare Fronczak’s DNA with other samples.

Through testing, Moore and a team of three researchers determined Fronczak had Ashkenazi Jewish, Italian and Eastern European roots. Eventually that led them to a woman who had married into the Rosenthal family, who told the DNA detectives about a set of twins who had vanished as infants.

Combing newspaper archives and other records, the detectives learned that the Rosenthal twins, Jack and Jill, disappeared as infants, though birth certificates confirmed their existence. Then they found two first cousins — one from from the mother of the twins’ side of the family and one from the dad’s side — who agreed to undergo DNA testing.

That was the final piece they needed.

“He was dumbfounded,” Moore remembered from the phone conversation in which she revealed Fronczak’s true identity. “I think he thought I was punking him.”

Fronczak, who said he feels younger than his age, was surprised to find he was six months older than he thought he was. He also found out he shared a birthday with his adoptive mom.

‘I want to help people’

While Moore closed one case, she opened another: What happened to Jill?

Paul’s newly discovered family members provided a few clues, saying his real parents had separated for a time around the time of Jill’s disappearance and Jack’s abandonment. But both parents died in the 1990s of cancer without revealing what had happened to the twins, and relatives don’t remember much else, which has been frustrating, Fronczak said.

“I’m still trying to piece it all together,” he said.

Today, Fronczak spends his free time researching leads on where Jill might be, including digging up holes on the former site of the Rosenthal home in Atlantic City, where he believes he might find her remains.

So far on that lot, he has only found animal bones.

He also has spent considerable time looking for the real Paul.

“I don’t sleep a whole lot,” he joked. “I’m trying to maintain this full-time job now and do the best I can … but my heart really is in trying to find Paul.”

Between work, spending quality time with his daughter, riding his motorcycle, watching “The X-Files” and playing his bass guitar, Fronczak continues his search. He’s in talks with a production company to turn his story into a documentary series, and he is looking for a hypnotherapist who might be able to help him uncover memories from his childhood.

Fronczak’s ultimate goal is to hand over the real Paul’s birth certificate and connect him to his mother. He’s hopeful Paul is alive, but he is prepared for the worst.

With Moore’s help, Fronczak was able to connect with an older sister in Atlantic City and cousins in New Jersey and Pennsylvania.

Lenny Rocco, one of the cousins, said he felt an instant connection when he met Fronczak.

As it turns out, they have many interests in common, including playing the bass guitar.

“When you hear these things that are so far-fetched and off the wall, your mind doesn’t accept it,” said Rocco, a professional musician. “But as we got to know each other more and more, I saw little things that you just couldn’t deny.

“With him, I felt something very close there. I can’t explain it. I feel he’s a part of me.”

Through media appearances and after publishing a book last year titled “The Foundling,” written with co-author Alex Tresniowski, Fronczak has found a community of other “foundlings” looking for their biological loved ones. Moore also received a growing number of requests from adopted people in search of their pasts.

Fronczak said that has broadened his mission beyond his personal quest.

“I want to help people. I want people that aren’t really sure about who they are to get started on that journey,” he said. “We all deserve to know who we are.”

A previous version of this story incorrectly stated Paul Fronczak’s age at kidnapping. He was 1 day old.