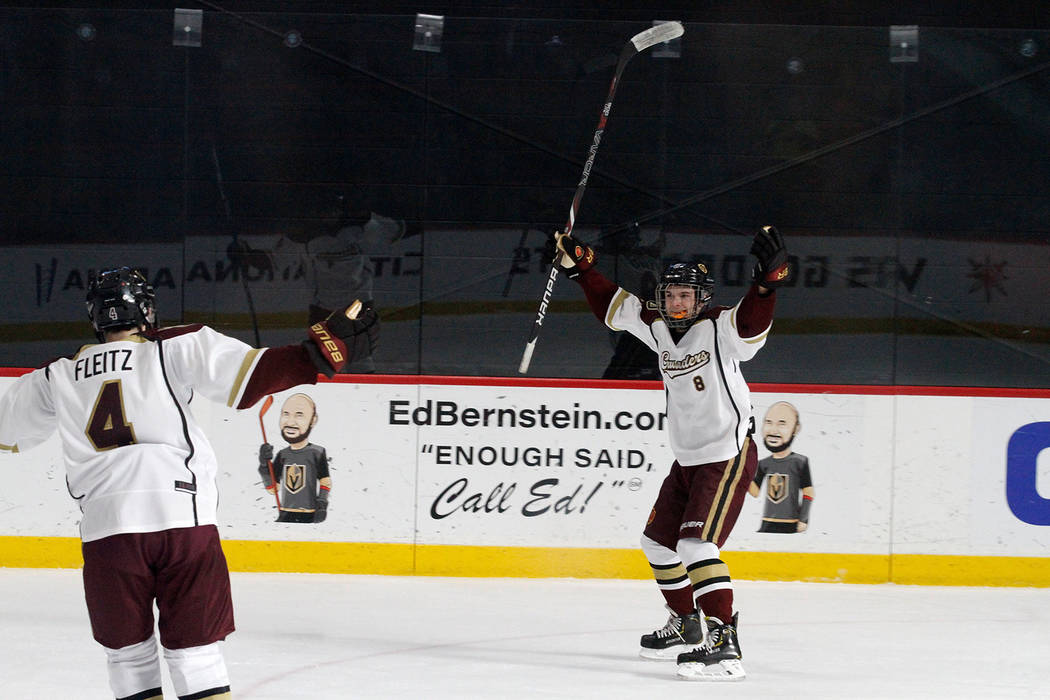 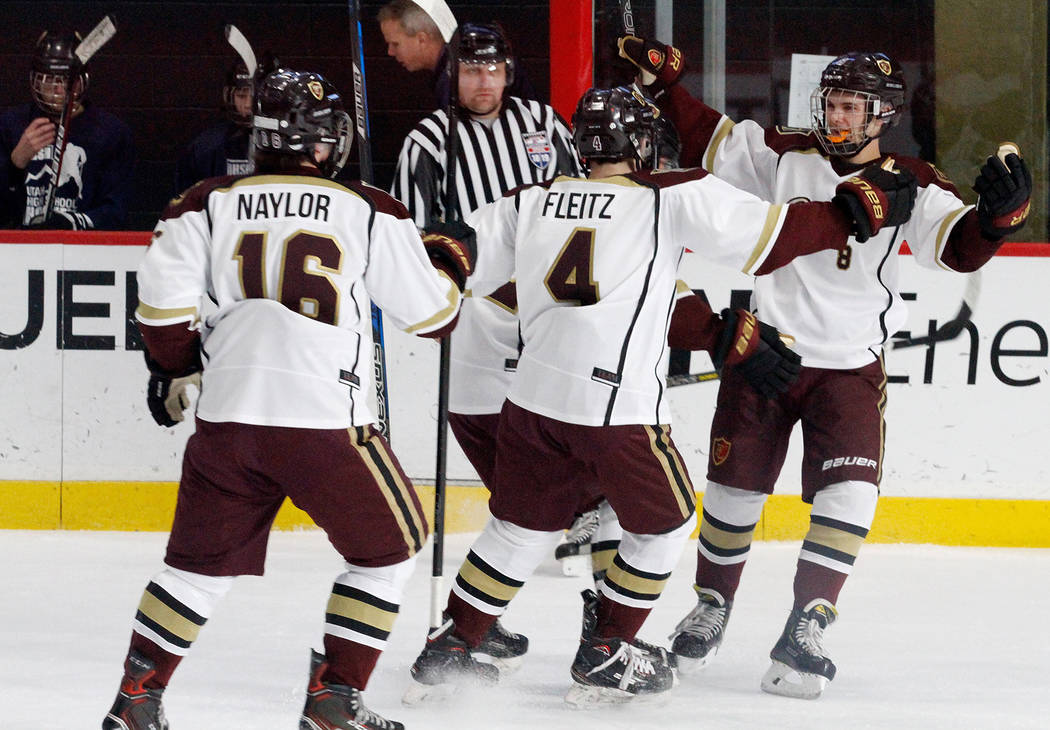 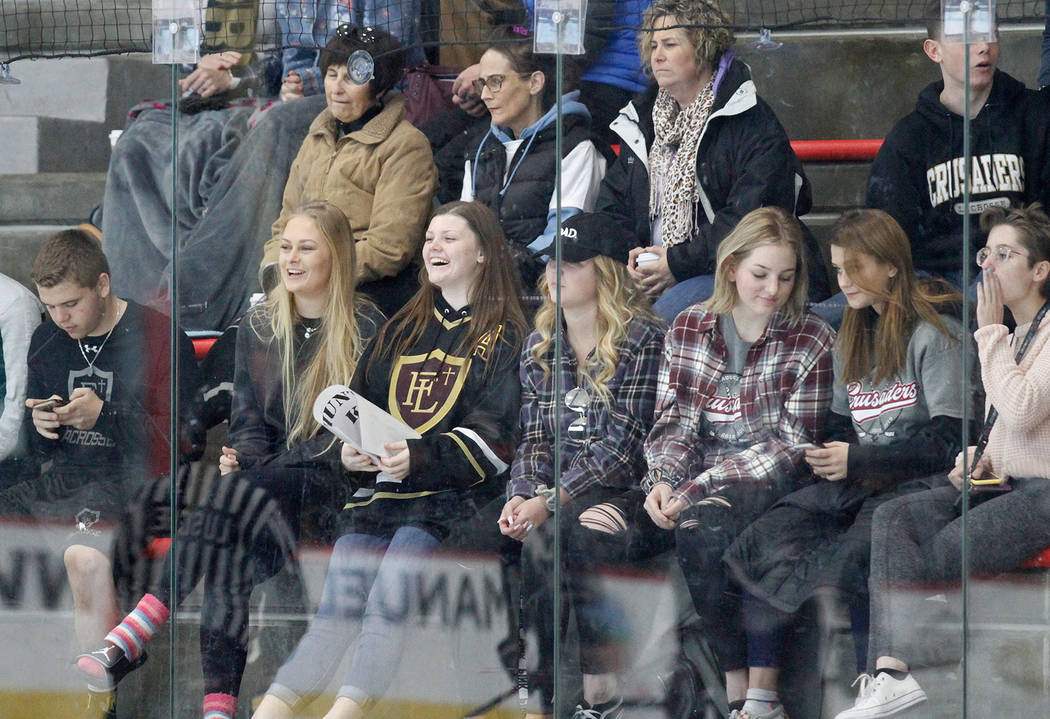 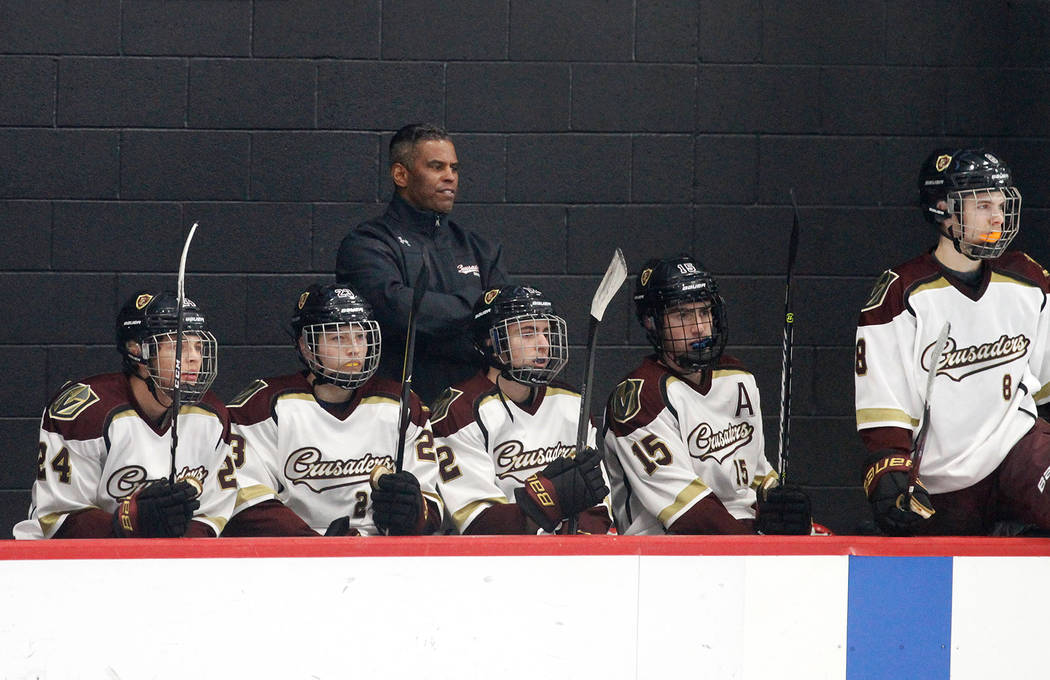 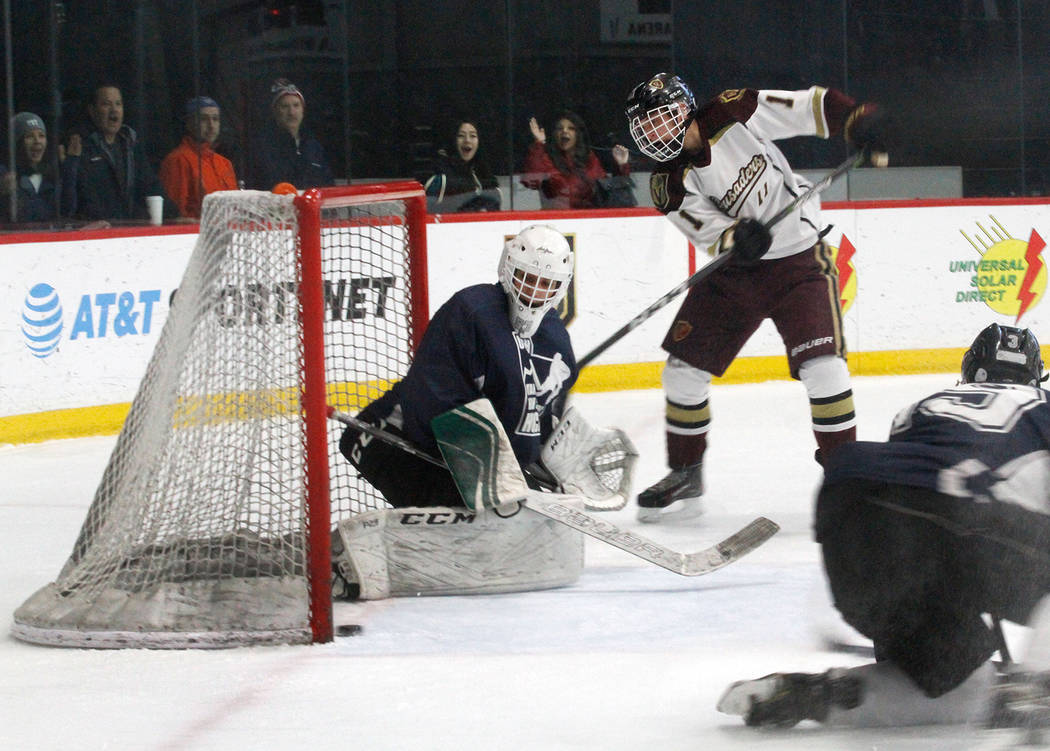 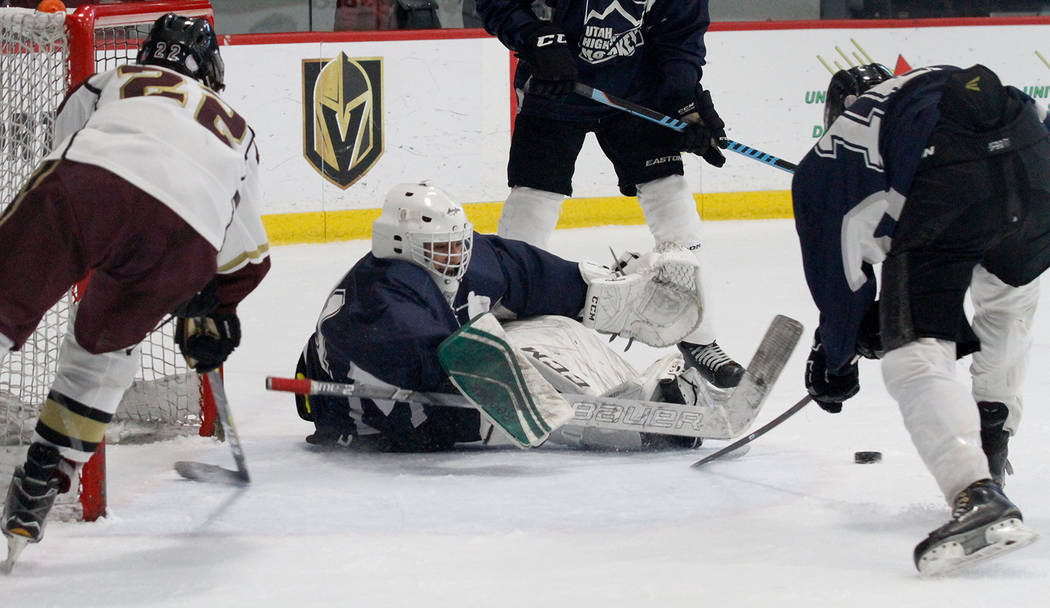 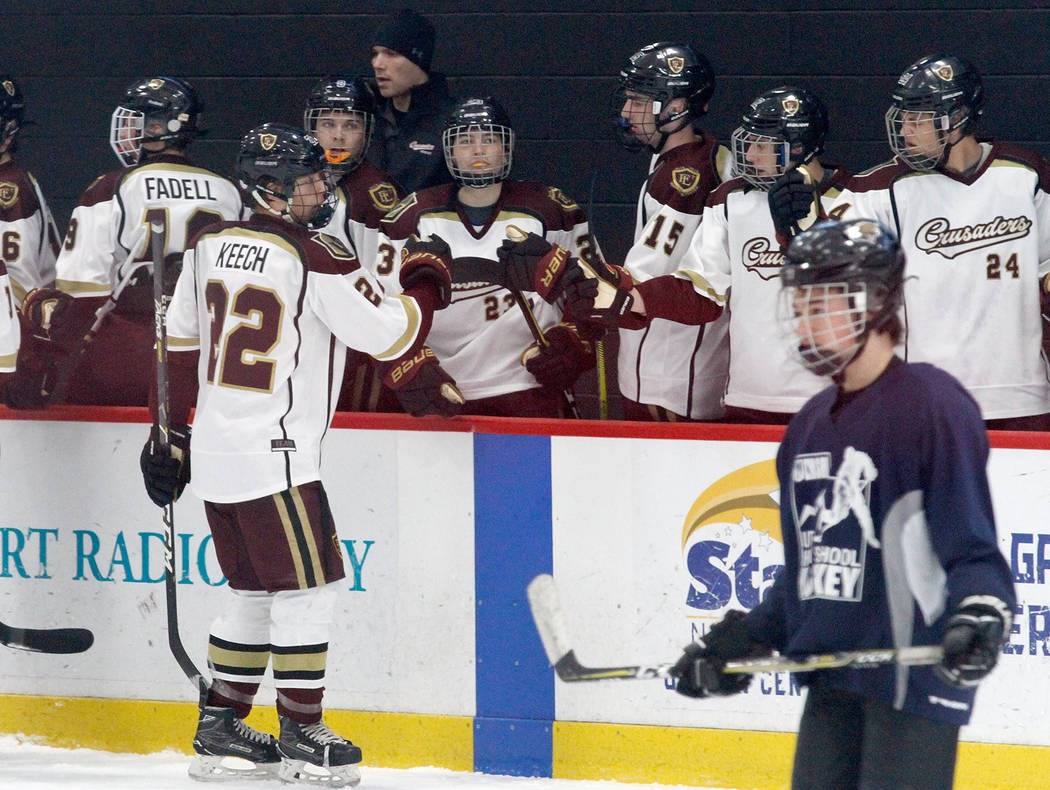 Faith Lutheran's Hunter Keech (22) celebrates with his teammates after he scored a goal against Utah's goaltender during the first period of a hockey game at the City National Arena in Las Vegas, Saturday, Dec. 15, 2018. Chitose Suzuki Las Vegas Review-Journal @chitosephoto 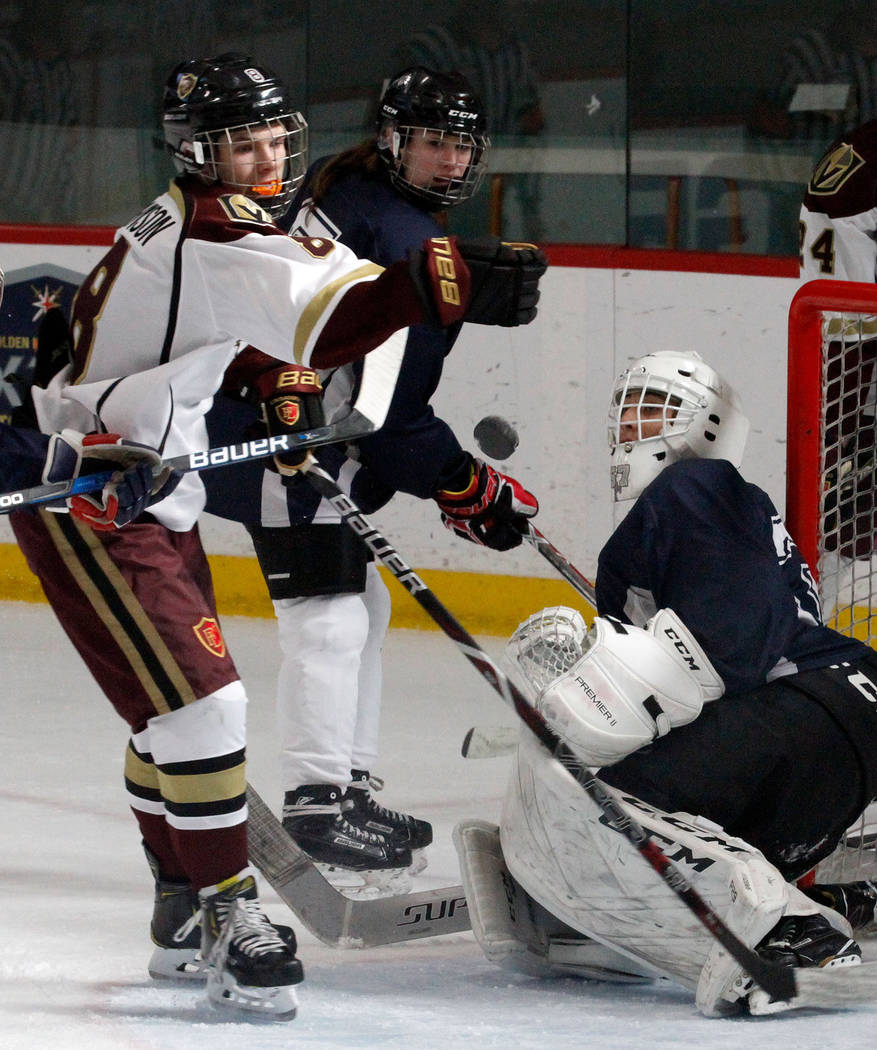 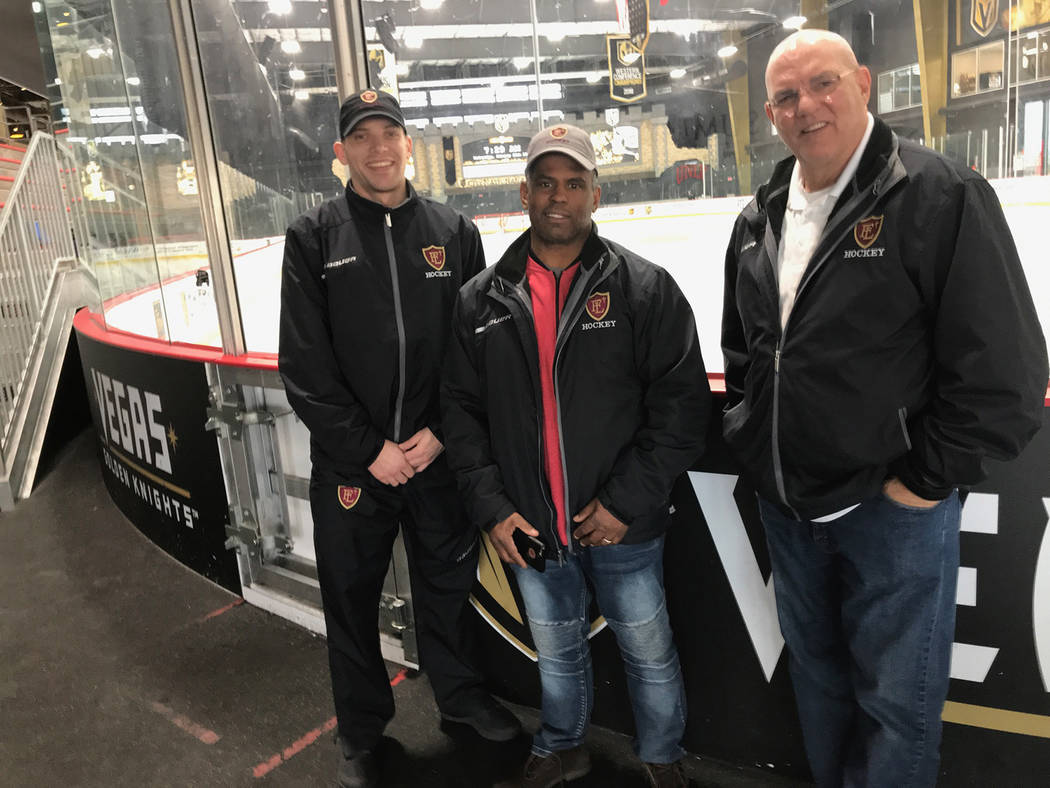 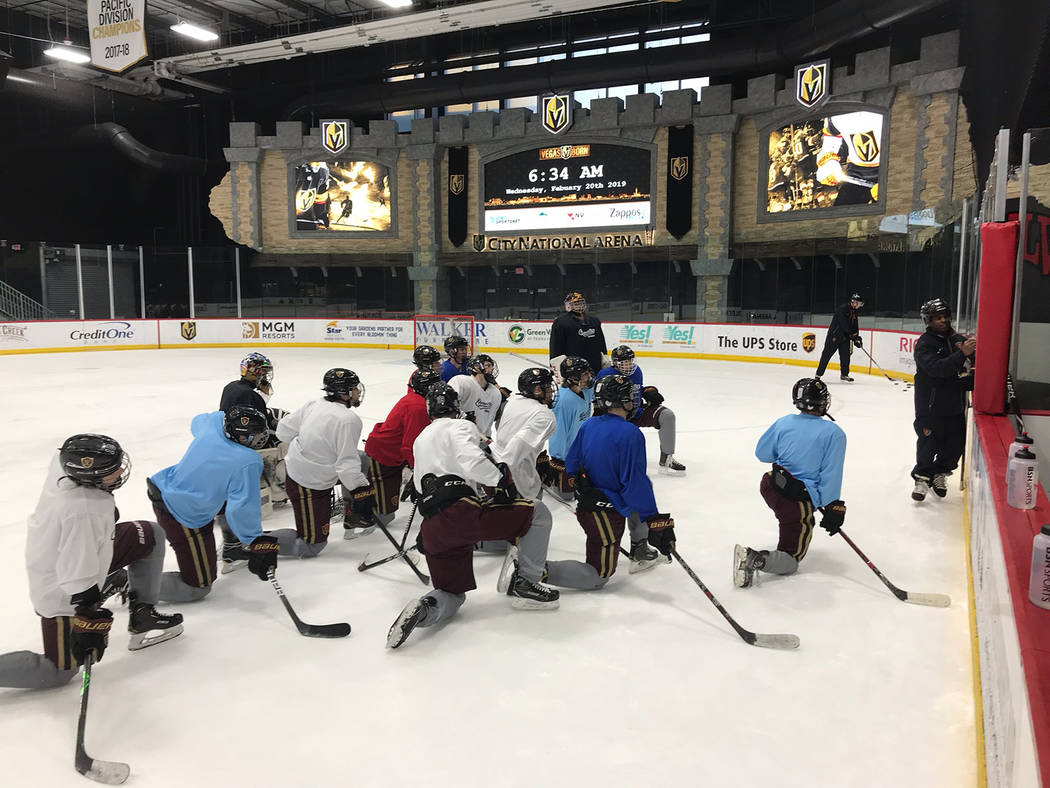 The most notable difference, however, is that they’re much younger than you. In addition, they don’t play in the NHL. But like you, their initial season became quite a coming-out party. They finished their regular schedule last weekend with nine wins, six losses and two ties.

Indeed, quite a record for these kids who attend Faith Lutheran High School. And while they constitute the first official high school hockey team ever in Nevada, they’re eager to help form a school league of their own within the state so they won’t have to play only against teams from Arizona and Utah.

They’re better known as the Crusaders, and they made their formal entry as a team last Aug. 4, “thanks in large measure to the Golden Knights,” said Craig Thornton, their general manager and vice president of hockey operations at Faith Lutheran. Thornton is also a Southwest Airlines captain who pilots airplanes when he’s not spending eight to 10 hours a day helping guide the hockey team.

But it took a lot of doing from a lot of other folks before the team could get off the ground and onto the ice, Thornton stated. “I’m talking about people like Steve Buuck, the CEO at Faith Lutheran; Bret Walter, the athletic director; and a lot of the faculty at the school, all of whom got behind the idea of a hockey team early on.

“There’s also John Coogan, president of the Golden Knights Foundation, which financed our ice time,” Thornton added. The team played eight regular season games at City National Arena in its first year, but the Crusaders also practiced for one hour four mornings a week throughout the season.

“As it was, we started two months after the rest of the high school hockey world began. Then we had to play catch-up in a big hurry; we had to get uniforms and equipment. We had to work with other schools to fit into their schedules, and we had to raise funds for traveling and for the numerous other necessities.”

He noted that the entire hockey operation at Faith Lutheran, which also includes a middle school team, was “self-funded during the first year,” adding that “Golden Knights management and the Junior Golden Knights helped considerably.”

Thornton, 60, grew up in Los Angeles and became exposed to hockey at the age of 10. As a youngster he played club hockey for the Topanga Plaza Hornets in California’s San Fernando Valley. “I’m happy to say that my son Andrew, who has been skating since he was four, was a defenseman on this Crusader team.”

Then there’s Eldon Wade Reddick, better known to followers of hockey as Pokey Reddick, who was a renowned goaltender during his seven-year tenure in the NHL. Reddick, a resident of Las Vegas for 27 years, coached the Crusaders during their highly successful infant season.

“We got a late start, but we played huge,” he said. “We didn’t know exactly what we had early-on (in the way of player talent) in order to get to the top level of high school hockey.

“Maybe we thought it would take another year to get to the level our team played,” Reddick continued. “Actually, I think we finished two years ahead” of everyone’s expectations.