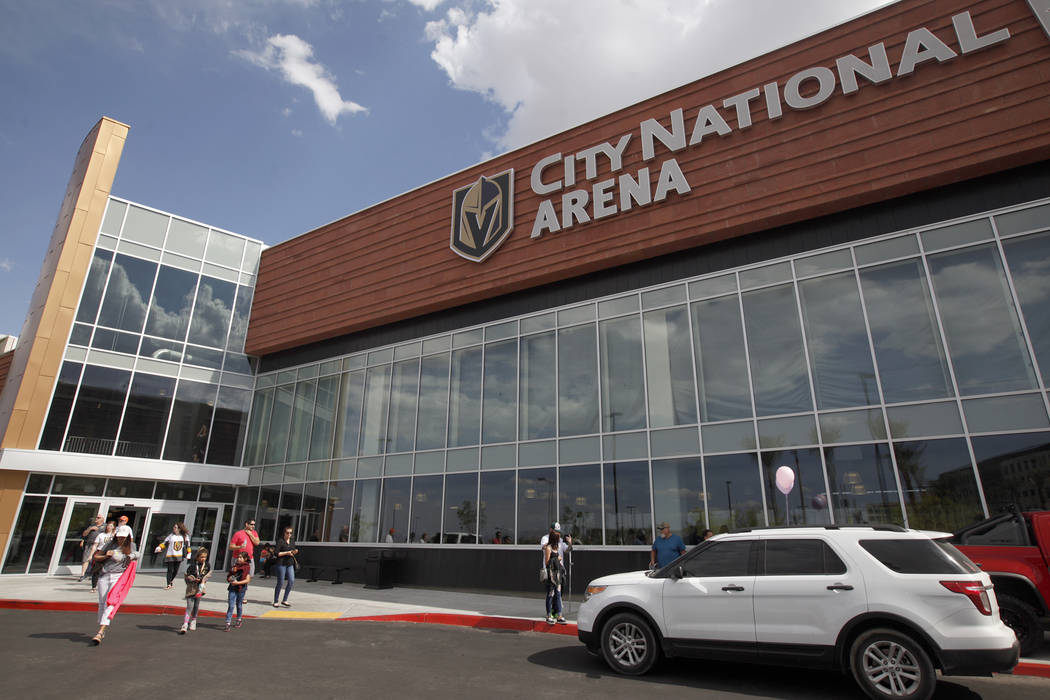 Golden Knights fans leave the City National Arena in Las Vegas, Sunday, May 20, 2018. The shirts, all 150 of them, were sold out in the first half hour. Rachel Aston Las Vegas Review-Journal @rookie__rae

For anyone who thinks of City National Arena as just some practice facility for the Vegas Golden Knights, with little else to offer in between National Hockey League seasons, be assured that you’re in for a surprise.

In fact, if you’re looking for a way to stay cool at any time of the week during these triple-digit days, you might try lunch or dinner at MacKenzie River restaurant, on the second floor of the arena. Follow that up by watching some really good figure skaters or amateur hockey players perform on either of the two rinks.

And if you would like to rent skates, or bring your own, at certain times of the day you’re free to get out on the ice to do your own thing, or you could learn how to join one of the amateur hockey groups. Keep in mind that children of all ages are welcome, and regardless of whether they know how to skate there are learning programs and other activities available for them.

Of course the gift shop offers an enormous selection of shirts, hats, memorabilia and just about anything else you can think of that relates to the Golden Knights.

Just ask Daniel Patterson, general manager of City National Arena, and he’ll talk up a storm about how folks are enjoying this bastion of ice activity, seven days a week, even during the Golden Knights’ offseason. The arena, just northeast of Downtown Summerlin, is at 1550 S. Pavilion Center Drive, a short walk from Red Rock Resort.

“People keep coming here to see what we have to offer. Well, very often and to their surprise they’re finding that we have a lot to offer, even after the great season the Golden Knights had and before the start of next season,” Patterson said.

“We offer learning and skating programs for people of all ages. Of course we have the two separate ice rinks, and we have groups and clubs that play hockey at various times throughout the week. But we also provide two to three hours a day for general public skating,” he added.

Patterson explained that due to activity at the arena, especially once the Golden Knights begin training for their next season on Sept. 13, people interested in the hours each day for general public skating should check the facility’s website at CityNationalArena.com.

The arena is owned by the Golden Knights and was built on a site leased from the Howard Hughes Corp. It was constructed to the specifications of team owner Bill Foley and will have its first anniversary on Sept. 18. The restaurant, which specializes in pub foods such as pizza, hamburgers, and fish and chips, is part of the MacKenzie River restaurant chain, located in nine states and also owned by Foley.

But hockey is first and foremost at the arena.

As for the activity that has already occurred at the facility, which also houses the Golden Knights team offices, an enthused Patterson, who was lured away from the NHL’s Los Angeles Kings by Foley to run City National Arena, stated:

“It’s pretty incredible, what we have seen happening here thus far. Quite honestly, I envisioned that it would take about two years to be where we are. But we are there now! And we did it in much less than one year.”