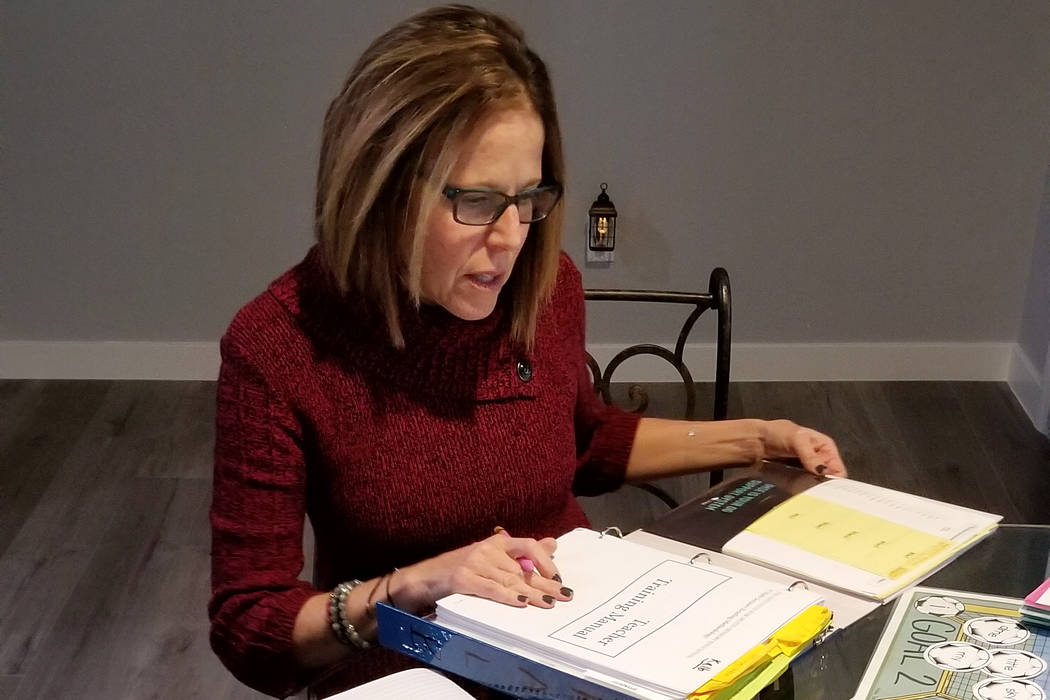 Shelley Kalb at her home office in Summerlin. (Courtesy of Matthew Kalb)

No doubt you’ve heard a lot about overcrowded classrooms. It’s not just a Las Vegas problem — nor is it just a Nevada problem. It’s a universal problem. Indeed, it can become a horrific problem when a teacher is forced to deal with a classroom of 40 to 45 students.

Even more disconcerting is that due to those conditions, “there are kids who just get passed on from grade level to grade level. And that means kids who have learning disabilities are falling through the cracks,” stated Shelley Kalb, a certified learning specialist who lives in Summerlin.

And most disturbing of all is the bottom line. Kalb asserted that “today, one in five people in the United States has a learning disability.”

She explained that two years ago she left the classroom, the principal’s office and school administration after 25 years of serving in those capacities, “to go back to work in behalf of individual kids. It was a time for me to step back and decide what I could do in the best interest of children.

“I work with them on a one-on-one basis. That’s what a learning specialist does. But first I design a custom program for each child, individually, based on their problem and the need. No two learning problems are alike, just as no two kids are alike,” Kalb said. “Some have been diagnosed with dyslexia, some with ADHD (attention deficit hyperactivity disorder).”

She mentioned other learning disorders that are due to sensory processing issues and language-based disabilities.

“There are kids who can function well but whose needs may be on the autistic spectrum,” she said.

Kalb, who receives referrals from educators and psychologists, works with a maximum of 15 students, ranging from kindergarten to eighth grade levels, each on an individual hourly basis. She explained that she concentrates on the use of specialized programs that she designs for each child, “based on their own needs and challenges.”

She said that her areas of child-learning expertise are in math, writing, grammar, vocabulary, study skills, reading and comprehension.

“Most importantly, I communicate the program that I design for a child with that child’s teacher. I want to be a partner in helping the child, together with their teacher and parents,” Kalb emphasized.

“As a learning specialist I’m different from a tutor, who often does not get to the full depth of the child’s problem,” she said. “Basically, these are kids with learning differences. In fact, the majority have above-average IQs. They just are not learners in the traditional sense.”

Kalb, who can be reached by calling Geared To Learn at 702-715-3030, received her master’s degree in literacy education from Loyola University of Baltimore in 2004 after spending more than a dozen years as a classroom teacher. She said her training includes the principles of a nationally accredited program known as the Orton-Gillingham Approach.

“When studying for my master’s, Orton-Gillingham was part of the program. After I received my degree I did an additional 60 hours of training in the program,” she added.

Orton-Gillingham was devised more than 70 years ago by a neuro-psychiatrist and an educator-psychologist.

According to the Academy of Orton-Gillingham Practitioners and Educators, the system is “an instructional approach intended primarily for use with individuals who have difficulty with reading, spelling and writing of the sort associated with dyslexia.” It adds that the approach is “most often associated with a one-on-one teacher-student instructional model.”

Are you an optimist? Your health may depend on it