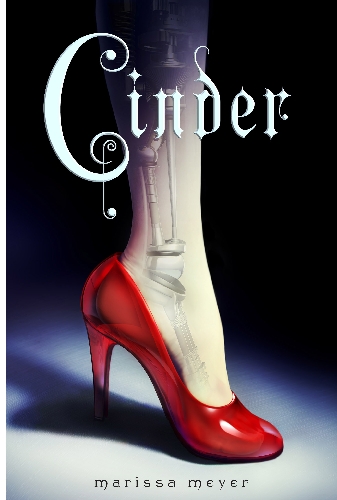 Once upon a time, you loved fairy tales.

Once upon a time, you loved princes and princesses, gnomes and castles with moats and dragons. There was magic in a fairy tale, there were monsters and evil queens, and you had to use your imagination to see it all.

Then you grew up, and you began to think that fairy tales were just for kids. But as you’ll see in the new book "Cinder" by Marissa Meyer, that magical feeling didn’t just carry you through your childhood. You’ll need it in the future, too.

It was too small, for one thing, it was old, and it hurt. But new feet were expensive, so when she was finally able to hide enough money from her guardian, she bought a sleek new appendage.

Too bad she had to keep it hidden, just like she kept her metallic hand inside a glove. If people in the market knew she was a cyborg, they’d never approach her again and Cinder would lose her reputation as New Beijing’s best mechanic.

But her reputation did no good when the market was closed, as it closed on the morning that the local baker noticed blue bruises on her own body and was hauled away, screaming.

Nobody knew where the plague had originated. It started with small blue marks on neck or chest, and quickly consumed a body. Scientists searched for a cure but Earthens still died by the hundreds among them, the Emperor, and Cinder’s human "sister."

In a fit of rage and grief, Cinder’s guardian sold Cinder to a lab because cyborgs made great guinea pigs — but there was something about the teenager that interested one doctor: she seemed to be immune to the plague.

Meanwhile, as New Beijing mourned, there was also a celebration being planned for Crown Prince Kai, who would be the new emperor. But it wouldn’t be a happy event: one of the guests, Queen Levana from Luna, was scheming to marry Kai.

Cruel and ugly, Levana had the unusual ability to make Earthens believe that she was beautiful and benevolent. She could control Earthen minds.

But she could not control Cinder

There is one word that best sums up this book: Arrrrrrrgggghhhh!

Though author Marissa Meyer uses some old "Cinderella" bits here, "Cinder" obviously barely resembles the original. Nope, this isn’t your kindergarten fairy tale: filled with danger, relevant characters and a could-it-happen futuristic spin, this tale had me grabbed by the end of the first page. Yes, I’ll admit I had the "secret" figured out early, but I was so into this book that it didn’t matter.

Then — at the risk of ruining things — Meyer does something that had me screaming: she leaves readers with the most incredible cliff-hanger ever. Ever. Seriously, you won’t believe it.

If you’re 12-or-older child, grew up with once upon a time, and you are looking for a great new author to love, take a pumpkin-coach if you have to and find this book. You plus "Cinder" equals happily ever after.