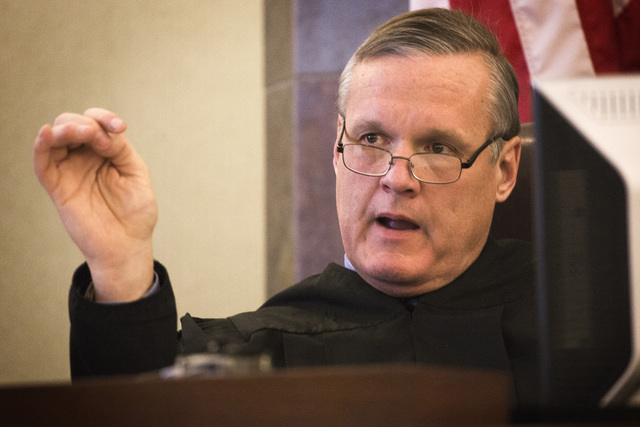 The chief judge in Clark County vowed Friday to improve the guardianship process after a series of stories by the Las Vegas Review-Journal exposed flaws in the system that left thousands of elderly and mentally ill in Clark County open to exploitation.

And the County Commission, which oversees the court system’s money, is ready to listen.

Last weekend, the Review-Journal ran a series of stories showing problems with the county’s guardianship system that allowed private guardians to drain hundreds of thousands of dollars from the accounts of people they were supposed to be taking care of. Cases highlighted by the newspaper showed a lack of oversight by the courts, such as failing to require guardians to file annual accounts of a ward’s finances even though it is required by state law.

In a statement released through a spokeswoman Friday afternoon, Clark County District Chief Judge David Barker said he would seek funding from the county to add several programs that will better protect those in the court’s care.

“The establishment of a comprehensive Court Guardianship Program is a top priority of the Eighth Judicial District Court,” Barker said. “It is a court goal to ensure that they get the needed resources to adhere to national best practices.”

Barker said they would also look to add training programs for court staff and guardians, formalize a complaint process, and promote information and resources available to the public.

The concerns were enough for Sisolak to submit a change to the commission’s Tuesday meeting agenda, adding the issue of court-appointed guardianships.

Sisolak said he spoke to Barker, who agreed to speak at the commission meeting.

“I got numerous phone calls from individuals that are very concerned,” Sisolak said. “I want to have our staff and the judge explain some things to us and have a discussion about it.”

State Sen. Becky Harris is sponsoring Senate Bill 262, which would eliminate a state law that requires guardians to be Nevada residents. She said Friday she has heard concerns about guardians abusing their power from her Southern Nevada constituents.

“I’ve had a lot of people in Las Vegas and other places explain to me that this is a fairly common occurrence,” Harris said about guardians exploiting their wards.

Barker said that the guardianship court handles most of the 8,500 active cases “in a matter that is satisfactory to the parties concerned,” but admitted the current system has limitations because of a lack of resources and authority. The courts now have little to no investigative powers to even look into complaints of financial exploitation.

“Protecting those impacted by intellectual disabilities and diseases associated with aging is essential to the well-being of our families and community in Clark County,” Barker said. “The court will continue to pursue avenues and resources to improve the handling of guardianship cases.”