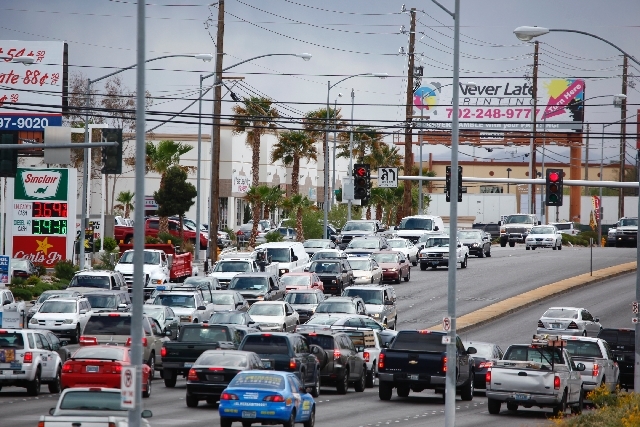 Now, the board chairman embraces a ballot measure that calls for extending that same tax over the next decade.

Although he remains skeptical, Sisolak said the change of heart came from watching a series of fuel tax-funded road improvements come to fruition under the guidance of the Regional Transportation Commission of Southern Nevada.

“I think that the RTC has demonstrated that they can put projects on the street, and I think they do it responsibly,” Sisolak said, noting an audit released earlier this month that found revenue generated by the current fuel tax was properly accounted for.

“I would have preferred a shorter time limit on the tax, probably another three-year deal,” Sisolak said. “But we got 10 years on the ballot, so I’m supporting it.”

Clark County voters will be asked Nov. 8 whether to approve Question 5, which calls for a 10-year extension of the fuel revenue index tax that took effect in 2013. About $3 billion would be generated by the tax, which would help pay for nearly 200 transportation projects.

If approved by a majority of county voters, gasoline taxes would rise about 3.6 cents per gallon annually, according to RTC projections. That comes to 36.32 cents more per gallon between now and 2026, based on a 4.54 percent annual inflation rate forecast for the producer price index.

“We want to raise only the money we can immediately invest in infrastructure,” said County Commissioner Larry Brown, who serves as the RTC’s board chairman.

“We’re not trying to build up an account,” he said. “We want to raise the dollars that are needed today for safety, improved mobility and less congestion.”

The only glimmer of resistance has come from brief “Vote no on Question 5” advertisements that are looped on television screens at a handful of gas stations. The operators of those gas station companies did not return phone calls seeking comment.

Along with Sisolak, groups and individuals that typically would oppose such tax hikes or increased fuel prices have come out in favor of Question 5. The lack of organized opposition prompted Clark County staffers to write the sample ballot arguments against the measure.

“The Nevada Taxpayers Association has historically supported measures in which there is a clear user-benefit relationship, and we believe that the fuel tax indexing is one of those cases,” Thornley said.

Paul Enos, CEO of the Nevada Trucking Association, said he believes the fuel tax is the most efficient way to collect money for street and freeway improvements.

“It’s used to maintain and build roads that the trucking industry and drivers in the state of Nevada use,” Enos said. “We worked really hard to make sure this tax would be devised in a fair way, so we feel really good about it.”

For now, the RTC receives $58 million annually from state and federal sources, along with the fuel tax approved in 2013 — just about enough money to “build an interchange or two,” Brown, the RTC chairman, said.

That funding likely would stay flat if Question 5 fails and several projects might not be completed as planned, including a $20 million study of how Interstate 11 would connect from Boulder City through the Las Vegas Valley or a new Skye Pointe interchange for the Centennial Bowl at U.S. Highway 95 and the 215 Beltway estimated at $155 million.

A 10-year extension of the fuel indexing tax would pump about $300 million annually toward completing nearly 200 projects. Although the fuel tax would stop climbing by 2026, the increases would stay in effect for another 20 years to pay for the county bonds that initially will cover the cost of the transit projects.

“In another 10 years, maybe funding will improve at the state and federal level, but few people are optimistic,” Brown said. “That’s why local government is taking on the burden, more than ever, to build local projects.”

Along with Nevada, six other states tie their fuel taxes to inflation: Utah, Florida, Georgia, Maryland, New Hampshire and Rhode Island, according to a study released in September by the Guinn Center, a nonprofit, bipartisan research group in Las Vegas. Michigan and North Carolina soon will implement fuel indexing, while similar taxes were repealed in Maine, Massachusetts, Wisconsin and Washington, D.C.

One argument against the tax, according to the study, is that it takes a larger percentage of income from poor people.

Sisolak , the county commission chairman, said the tax was “regressive” because owners of older, gas guzzling-vehicles would pay more at the pump , while drivers of expensive hybrid and electric cars are able to avoid the tax.

“At some point, we have to come up with a mechanism where everyone pays equally,” Sisolak said. “But no one seems to be able to come up with a better way to make money for these projects, and we’re in a situation where our roads need to be improved.”