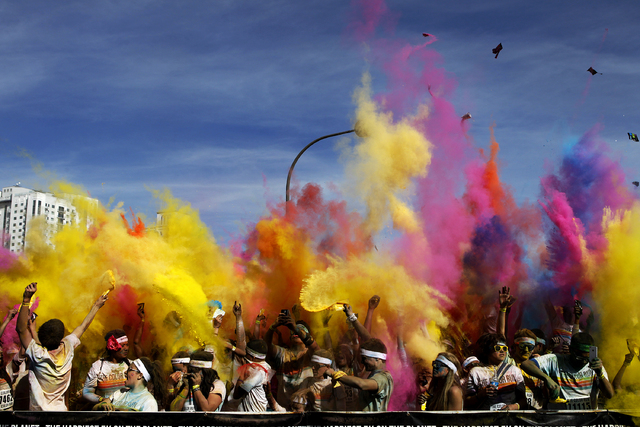 Participants in the Color Run Las Vegas throw up colored powder into the air after participating in the run and walk in downtown Las Vegas Saturday, Feb. 16, 2013. (John Locher/Las Vegas Review-Journal)

One of the most colorful street closures on the calendar is coming to downtown Las Vegas on Saturday.

The fifth annual Color Run, an event that describes itself as “the happiest 5K on the planet,” is an untimed 5-kilometer race in which runners dressed in white wind through the course and are pelted with colorful substances along the route. The Las Vegas race kicks off the 2015 tour that runs through October.

Registration is $45. The event’s website did not indicate whether it had reached its maximum capacity of runners.

A zig-zag street course from Fremont Street to Hoover Avenue and Las Vegas Boulevard to Ninth Street will be closed from 5 to 10 a.m. The Color Run is scheduled to begin at 8.

The Color Run is part of an international series of events that includes races in 153 U.S. cities. It includes a food and music festival. The local event includes a benefit for Three Square.