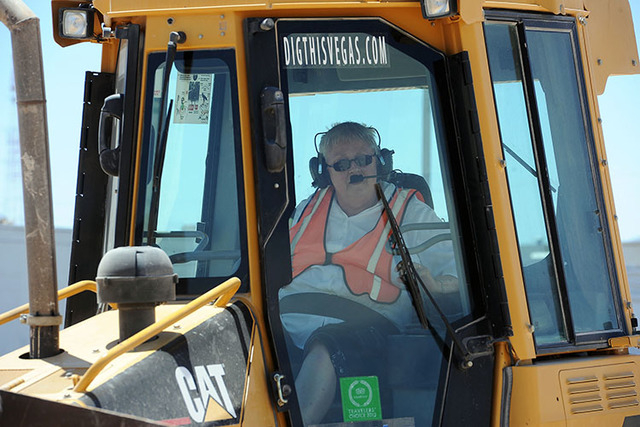 Dianne Deegan, 71, said she always wondered what it was like driving a bulldozer. (Jerry Henkel/View) 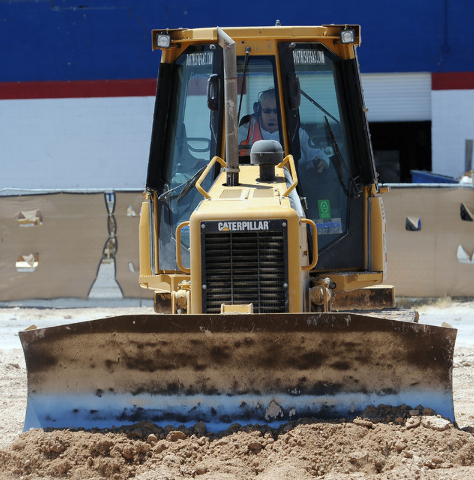 Dianne Deegan, of Huntley, Illl, works the blade on a bulldozer at Dig This. (Jerry Henkel/View) 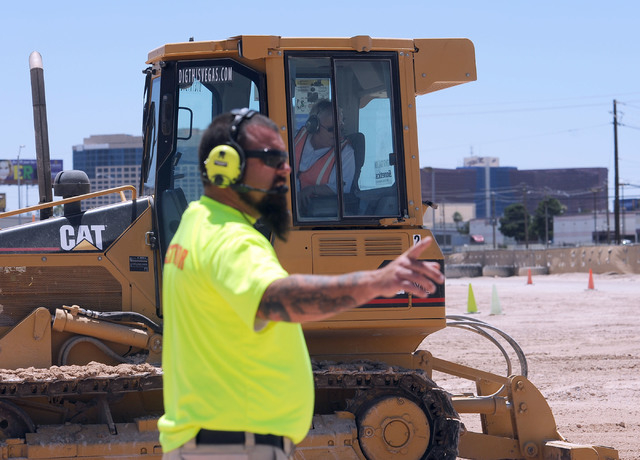 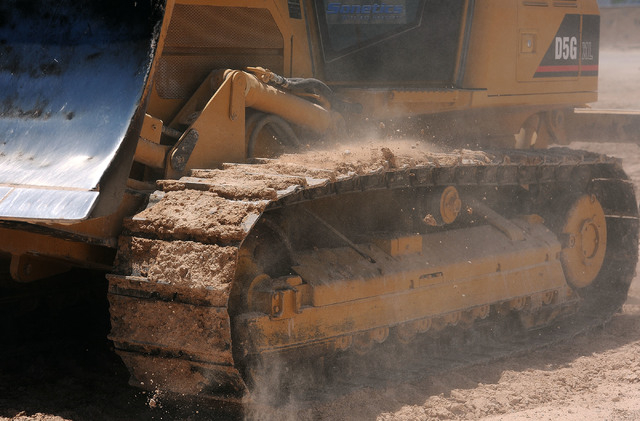 A bulldozer driven by Dianne Deegan churns up dirt at Dig This. (Jerry Henkel/View)

From bars to gaming, Las Vegas is described as an adult playground.

But 2 miles off the Strip, Dig This, 3012 S. Rancho Drive, offers a different kind of playground.

With three 15-ton Caterpillar excavators and two 10-ton Caterpillar bulldozers, participants are able to fulfill their childhood sandbox dreams in a 5-acre dirt lot without needing as much as a driver’s license.

“We did a survey on equipment of choice, and the people really wanted large earth-moving equipment, such as the bulldozers and excavators,” owner and founder Ed Mumm said. “The beauty of that type of equipment is it’s all tract equipment, which makes it a little bit slower and easier to operate.”

Each session starts with about 30 minutes of safety orientation and instruction. Participants then spend the next hour building dirt mounds, pushing and stacking 1-ton tires and digging trenches and holes.

Because of Las Vegas’ reputation as a party city, the business requires participants to pass a breathalyzer test before climbing into the cab.

“The city really put us through the hurdles to make sure that we’re all very safe,” Mumm said. “We had to align ourselves not only with the (Nevada Occupational Safety & Health Administration) safety standards but also with the (American Society for Testing and Materials) safety standards because we are technically a ride, like Circus-Circus.”

The business has been accident-free since its inception, but each machine is fitted with a remote shut-off that can be flipped by an instructor in case trouble arises, Mumm said.

“We’re extremely safe given the way we’ve designed the activities and the type of equipment we use,” he said. “Typically, a lot of people feel intimidated before they get in the equipment, so they’re keen to listen to instruction. They make sure they listen well.”

Dig This attracts about 600 customers each month. Although participants must be at least 14, Mumm said there is no maximum age limit.

“I think our oldest customer was a 95-year-old woman,” he said. “In fact, 50 percent of our customers are women.”

Dianne Deegan, 71, of Huntley, Ill., flew to Las Vegas with her husband to ride a bulldozer at Dig This and catch a couple of Cirque du Soleil shows.

“I used to work for a company that provided materials for building bridges, and I would always watch the bulldozers and wonder what it was like to drive one,” Deegan said. “(The experience) was great. I’m happy with how easily I could move the dirt.”

The idea came to Mumm around 2008 when he undertook the construction of his home in Steamboat Springs, Colo.

“After two hours in the excavator, I realized if I was having this much fun, imagine all the people who would also like the same experience,” Mumm said. “I’m a big kid who never really grew out of the sandbox, so I jumped on the business opportunity and soon realized there was a big demand on such an attraction.”

Mumm tested the business model in Colorado for three years before bringing the attraction to Las Vegas in 2011.

“Las Vegas is a natural fit for Dig This because it’s a city of attractions outside of the gaming industry,” Mumm said. “It’s well supported by tourism and the international community.”

Dig This is in the process of following up on franchise leads in Florida, Texas and California, according to Mumm.

“We really pull through on our mission statement and try to help people forget about their lives for a minute and do something they can smile about five years from now,” Mumm said. “It’s a very unique experience that fits well into Vegas because there’s always something crazy going on.”

Individual packages start at $249 for a 90-minute session.