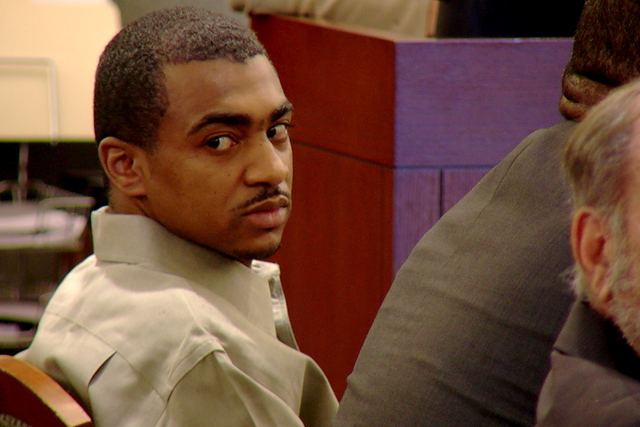 Robert Sharpe III, 30, looks to the rear of the courtroom in Clark County District Court on Monday, March 14, 2016, as guilty verdicts are read on 15 felony counts including first-degree kidnapping with use of a deadly weapon resulting in substantial bodily harm and sex trafficking. Michael Quine/Las Vegas Review-Journal Follow @Vegas88s 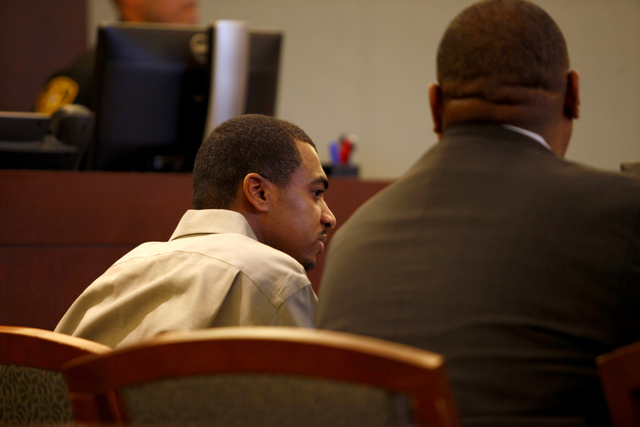 Two years after luring a teenager into prostitution, a Las Vegas pimp was convicted Monday on 15 felony counts in connection with brutally torturing her for months.

Robert Sharpe III, 30, faces life in prison without the possibility of parole at a sentencing in May on charges that include first-degree kidnapping with use of a deadly weapon resulting in substantial bodily harm, sex trafficking, living from the earnings of a prostitute, and assault.

Prosecutors said that in March 2014 he conned an 18-year-old woman into working as a prostitute for him, and then beat her repeatedly, nearly killing her and causing injuries that left life-long scars.

A Clark County jury of 10 women and two men, some of whom held hands and cried as a clerk read their verdict, deliberated the case for about nine hours over two days.

Sharpe shook his lowered head, but otherwise showed no emotion.

His lawyers, Dan Winder and Arnold Weinstock, said they plan to appeal the verdict on “numerous grounds.”

Sharpe was first arrested in September 2014, three months after the victim wandered into University Medical Center with a liver laceration, a spleen laceration, a renal laceration, fractured jaw, fractured skull, acute rib fractures, fractured vertebrae, a burned right foot, a body riddled with bruises and a broken finger that would later require amputation.

She eventually told police Sharpe persuaded her to become his prostitute after meeting her at a bus stop. She was headed out of town, to escape a troubled family life, and he invited her to party with him.

After he put her to work on the Strip, he beat her if she did not follow his rules, the woman told jurors.

In several hours of testimony, the now 20-year-old woman described the attacks in detail.

Sharpe beat her with his hands and feet, a metal pole, twisted hanger wire and a sock stuffed with oranges.

He would turn up the volume on his stereo, replaying the same song over and over, singing along, laughing, to drown out the sound of her screams, of the thumps of his fists on her body, of a metal pole cracking her bones, of wire cutting her flesh.

In the last days she spent at his North Las Vegas home, he forced her to sleep in his garage because of her rank, infectious wounds. He gave her a jug of water, which she had to refill with a hose in the backyard, the only place she was allowed to rinse off. He fed her cereal or a ham sandwich every other day.

There were no clocks in the house, and he took her cellphone when she wasn’t on the streets. Mostly, she didn’t know what day it was. When she was allowed to call her family — maybe once a week — he would be in the same room, monitoring her conversation.

Defense lawyers tried to show another pimp, known only by the nickname “Slim,” could have been the abuser.

The woman escaped Sharpe only after he tried to sell her to another pimp, according to prosecutors. But the woman was nearly dead, so Sharpe left her near a Wendy’s restaurant across from University Medical Center.

“It’s unfortunate what happened to that young lady,” Winder said. “But I think there still is a question of who is the perpetrator. I don’t think there’s enough evidence to show it was Mr. Sharpe.”