A flood to remember
In 1999, billions of gallons of rain fell over the valley over about an hour in a 100-year storm that killed two people, left many homeless and caused millions of dollars in damage.
1 / 3 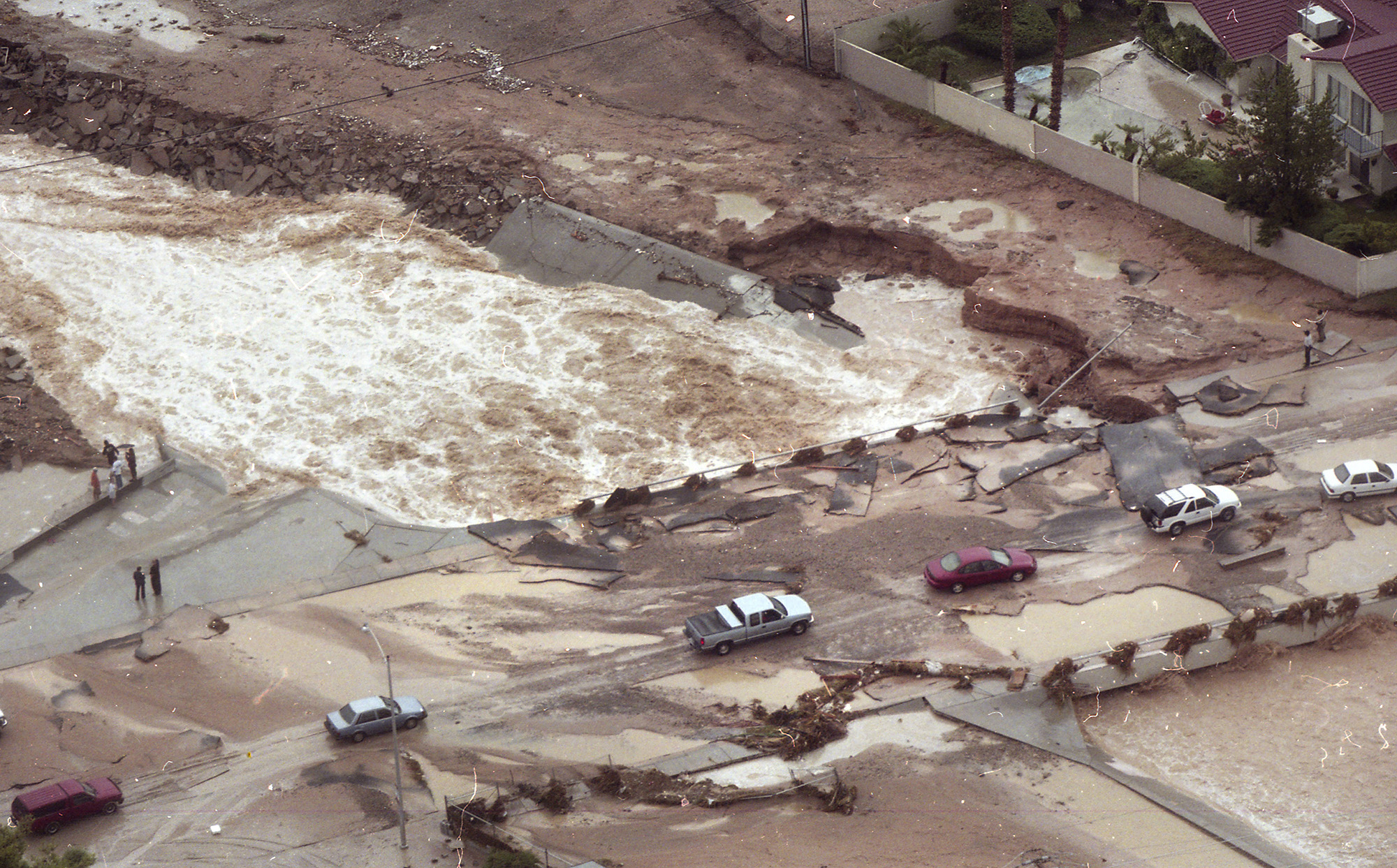 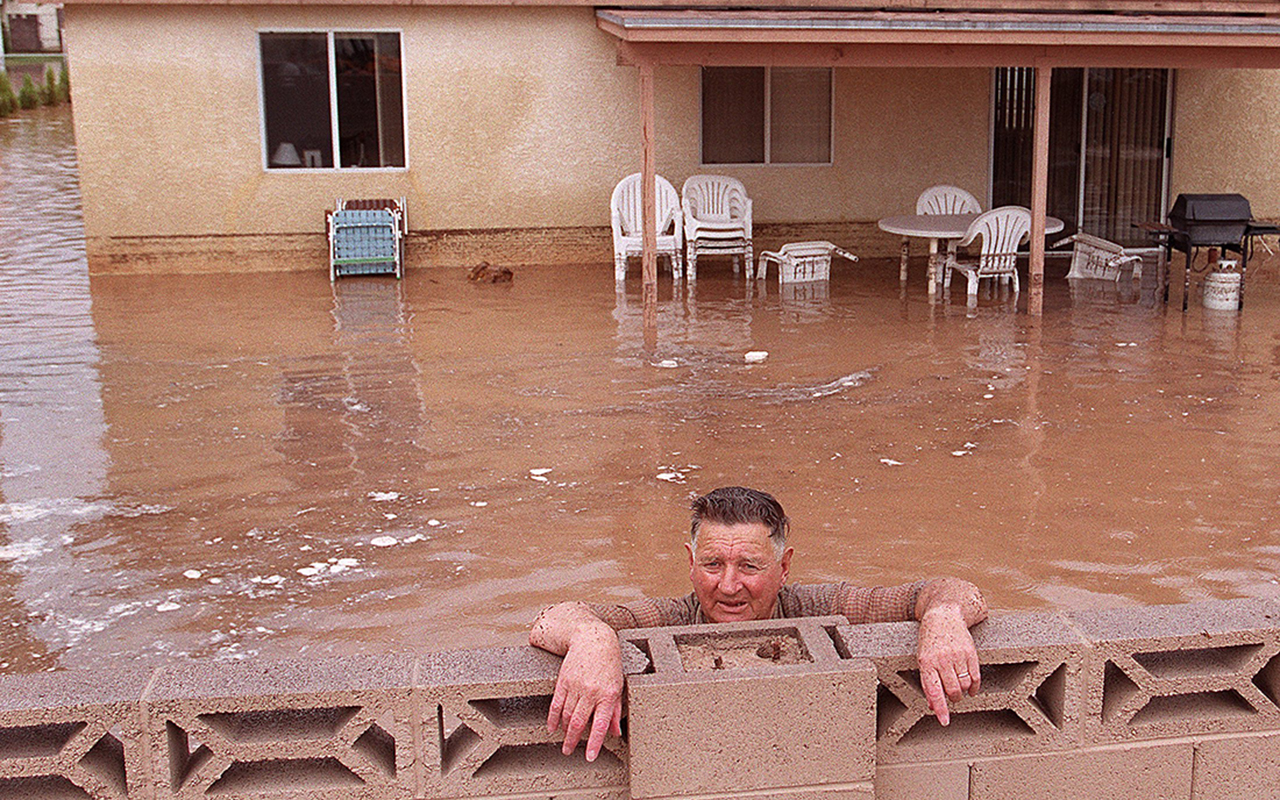 A man stands in the backyard of his flooded home during the 1999 flood. (Las Vegas Review-Journal file)
3 / 3 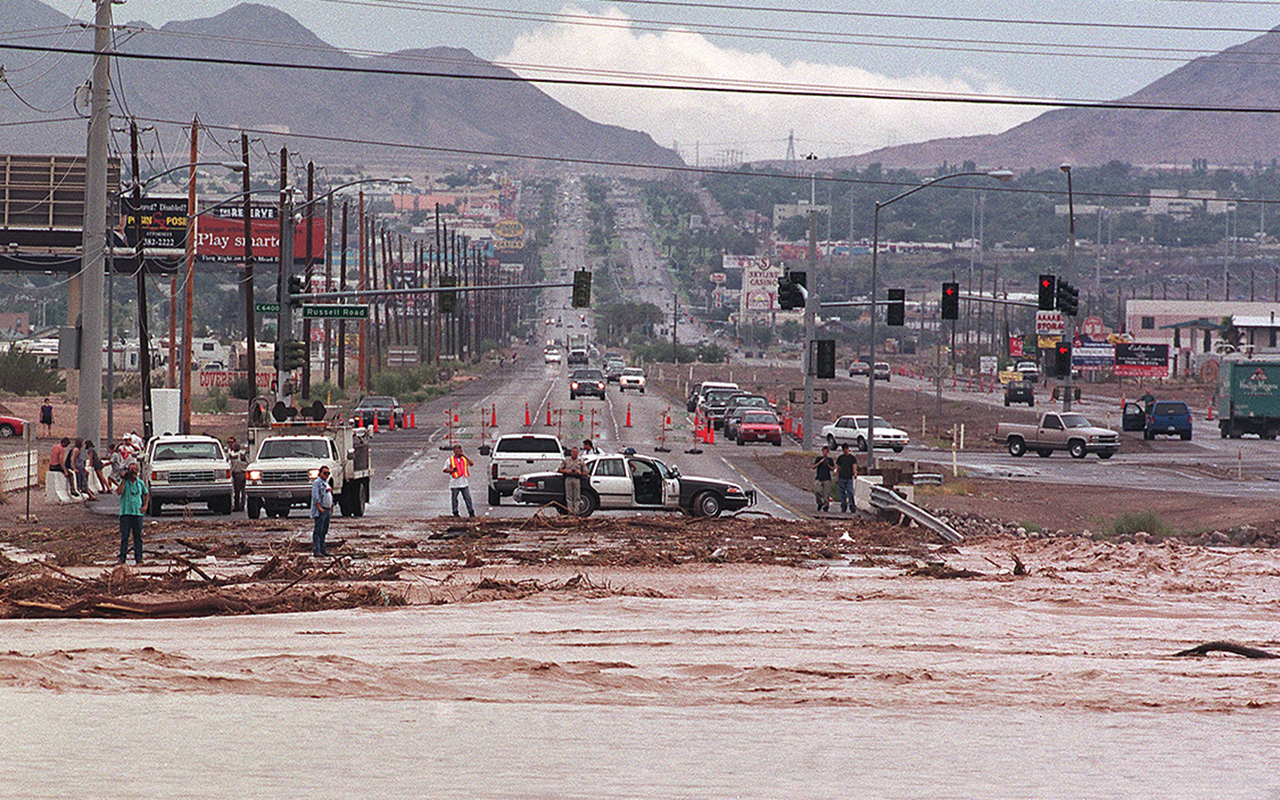 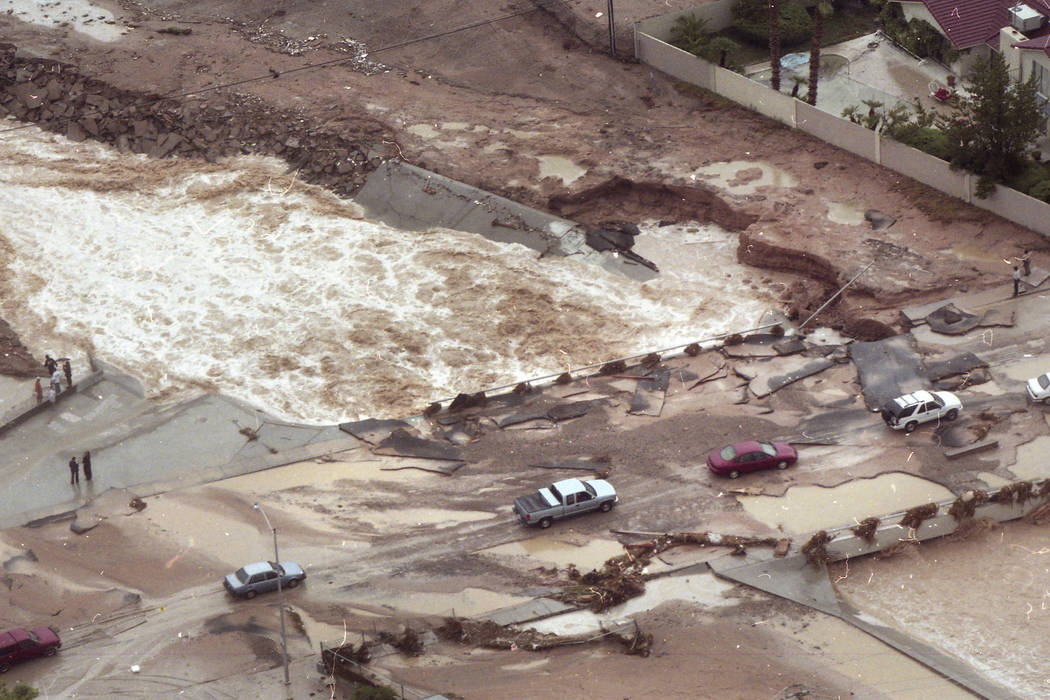 Cars pick their way across broken pavement on the Spencer Street bridge over Flamingo Wash on July 8, 1999 in Las Vegas. Heavy rains caused the wash to overflow its banks, damaging the street and cutting away at the banks (Las Vegas Review-Journal file) 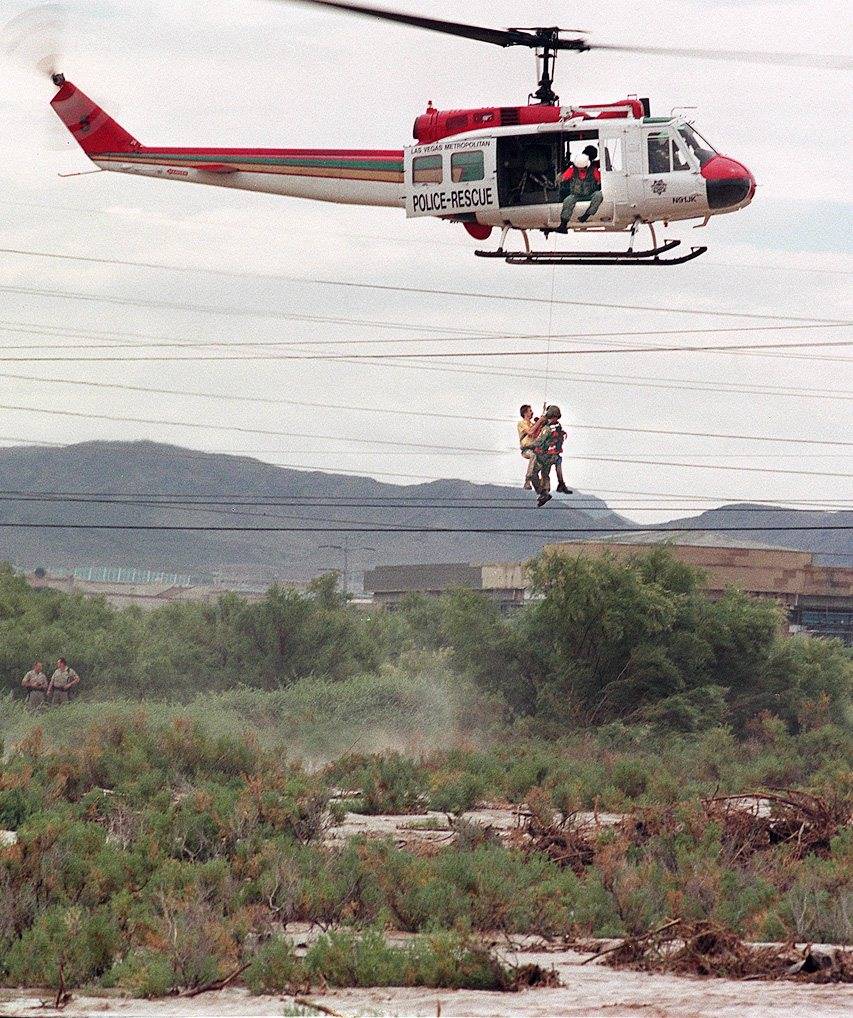 Las Vegas police rescue a man to safety after his vehicle was washed off Boulder Highway into Flamingo Wash East. (Las Vegas Review-Journal) 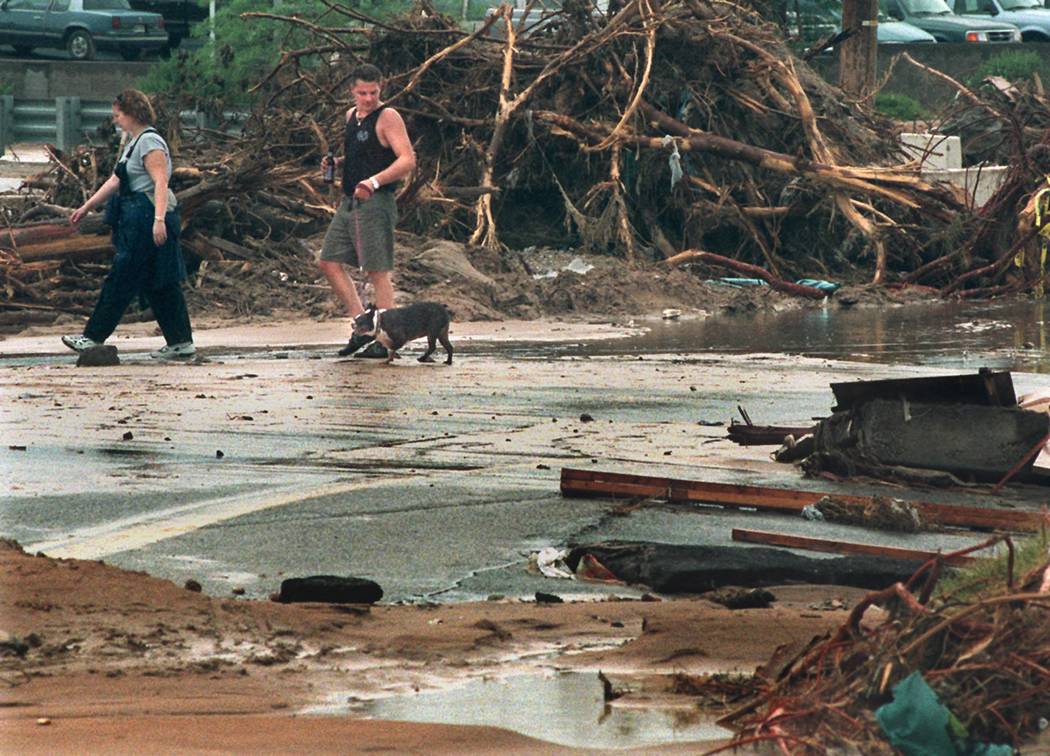 Deana and Ron Bender, residents of the Miracle Mile trailer park walk near their home along Boulder Highway with their dog, Spike on July 12, 1999. 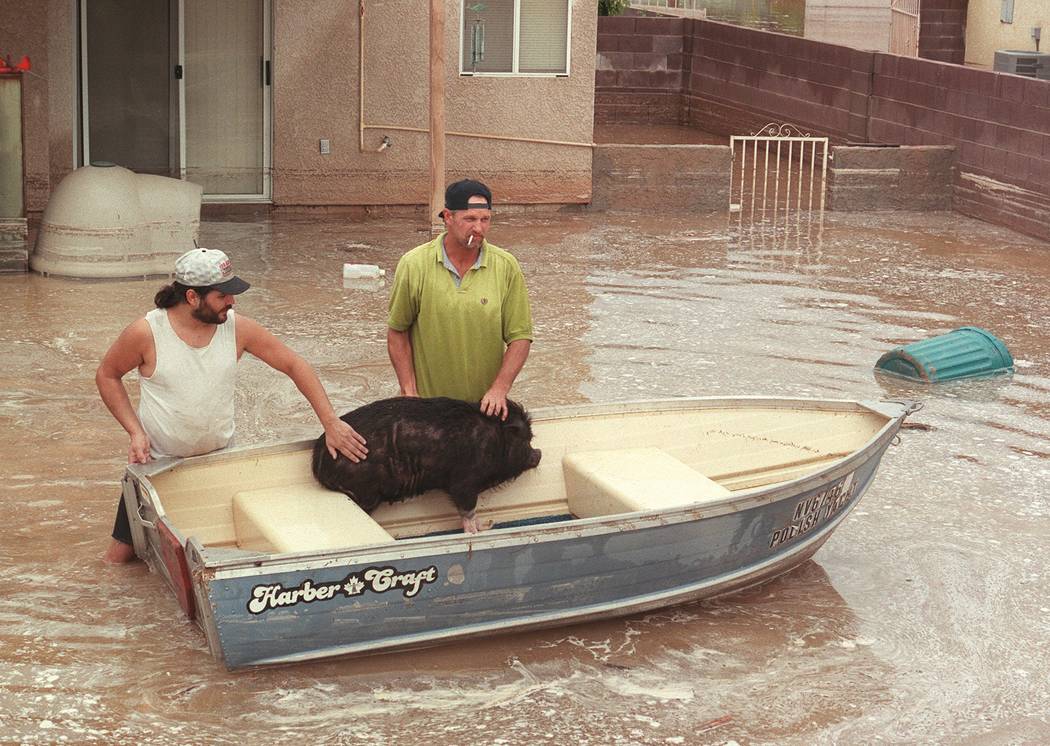 Chris Kangas, left, and Mike Suits calm a pot bellied pig they rescued at a residence on Thurgood Ave. The pig was outside in a pen when the floodwaters began to rise. (Las Vegas Review-Journal file) 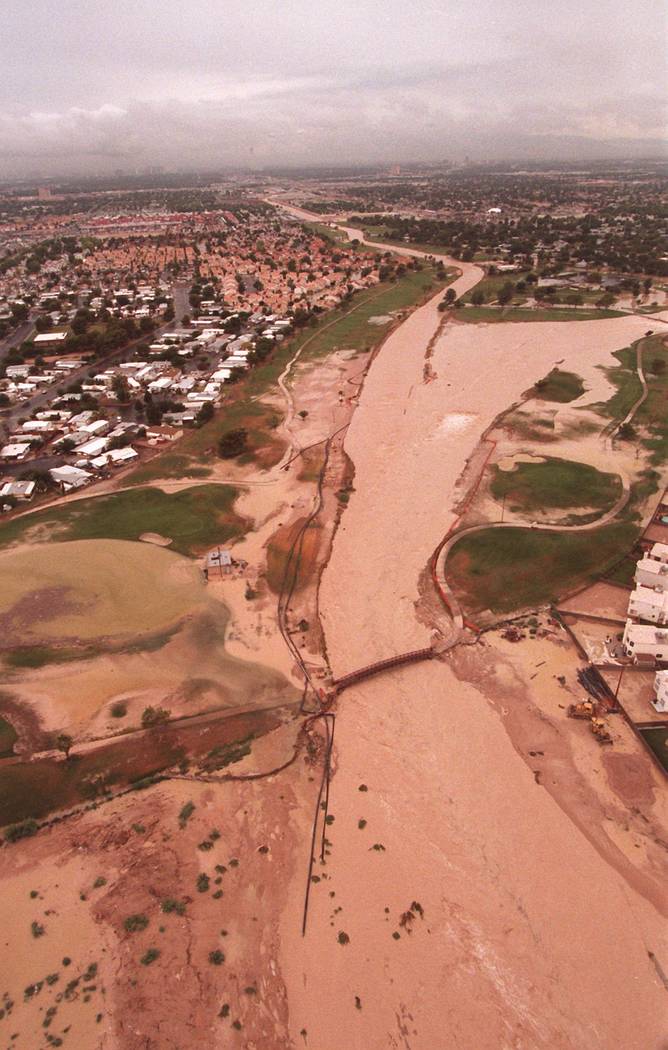 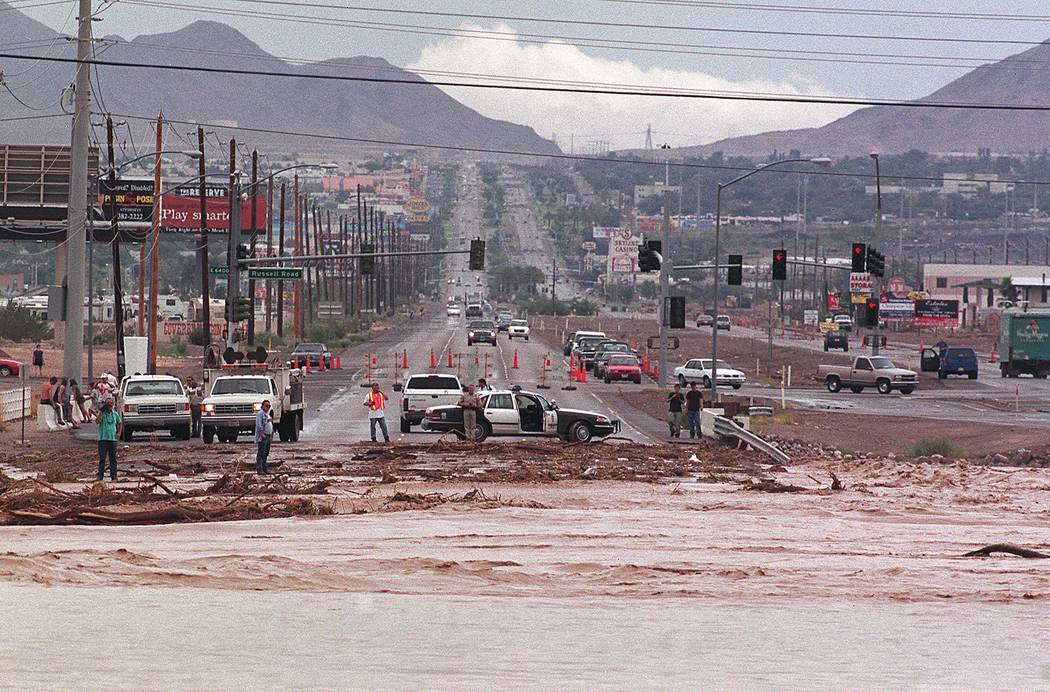 Flood waters cross Boulder Highway just north of Russel Road. The road was blocked by Metro Police and several helicopter rescues were made in the area. (Las Vegas Review-Journal file) 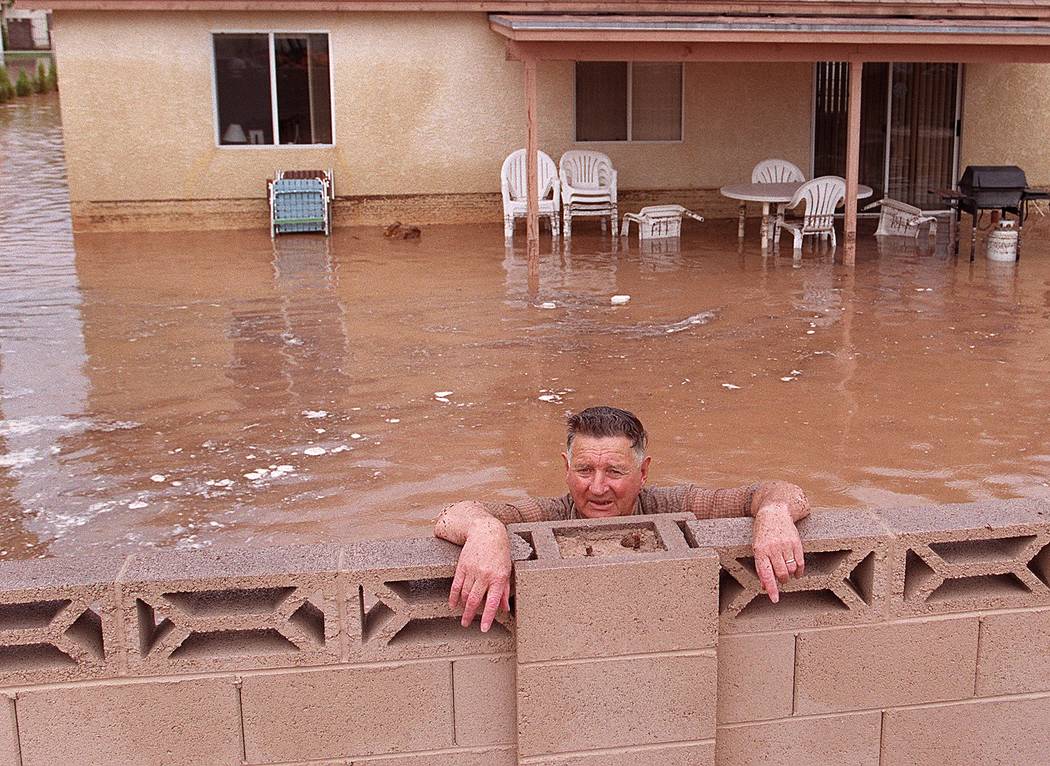 A man stands in the backyard of his flooded home during the 1999 flood. (Las Vegas Review-Journal) 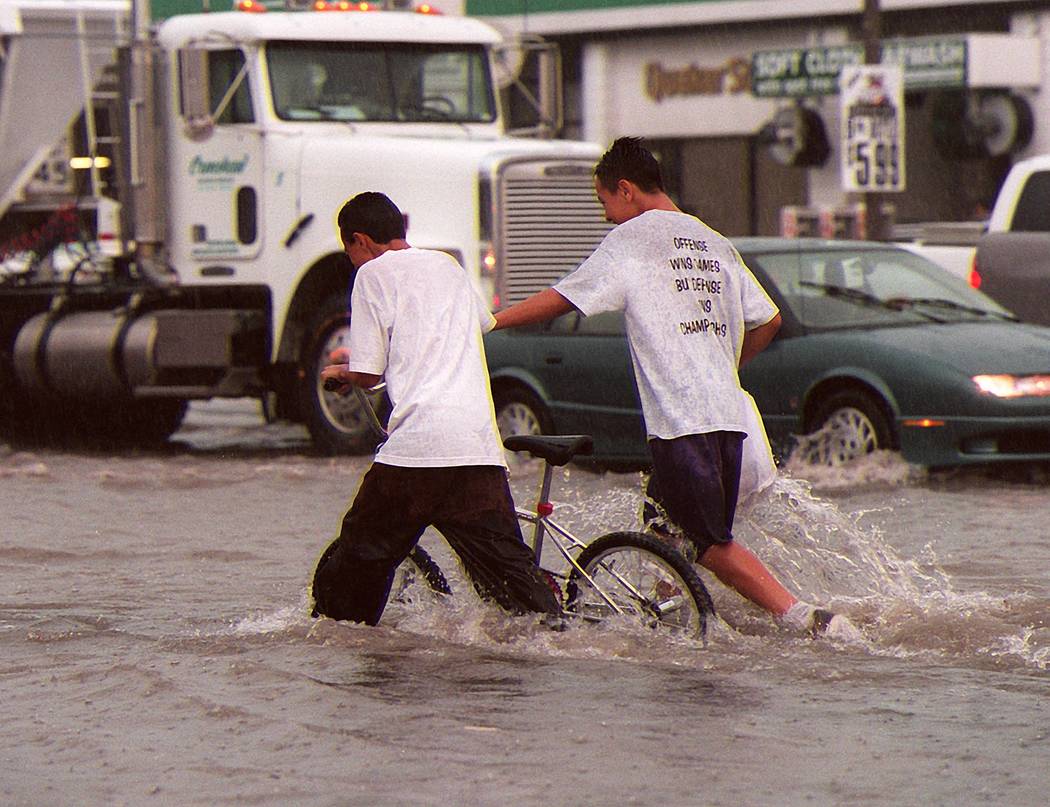 Two boys push a bicycle through the intersection of Charleston and Lamb on Thursday, July 8, 1999. (Las Vegas Review-Journal file) 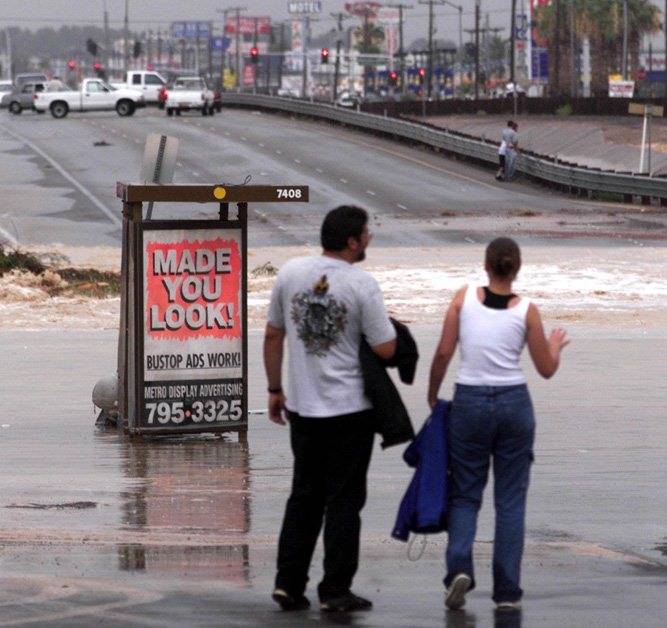 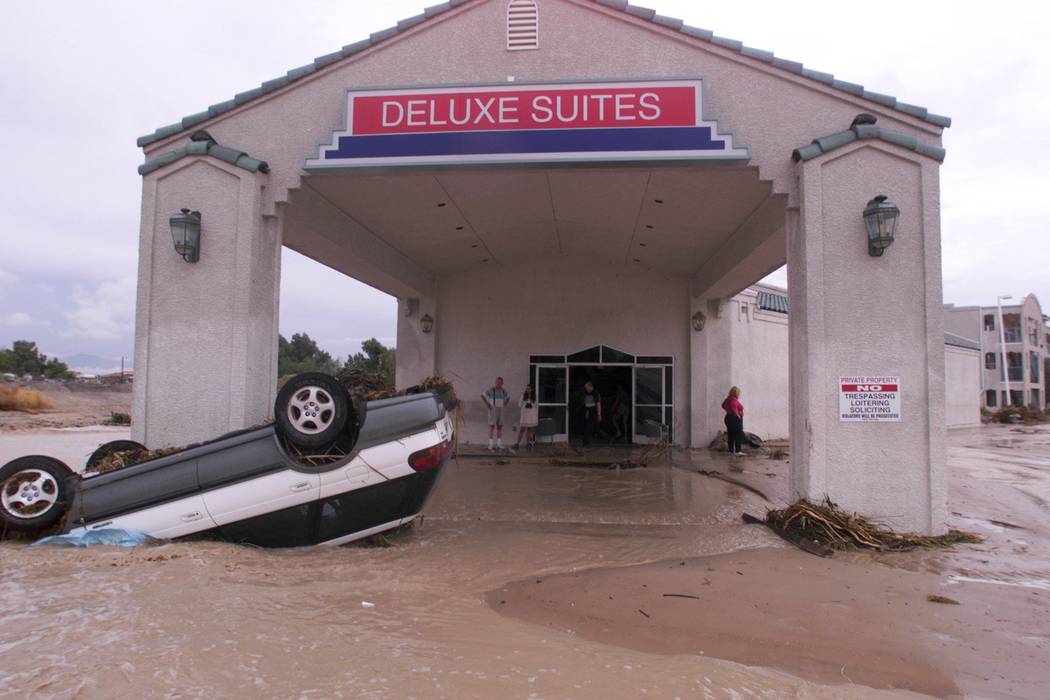 An automobile sits in front of the Ramada Deluxe Suites on Boulder Highway. (Las Vegas Review-Journal) 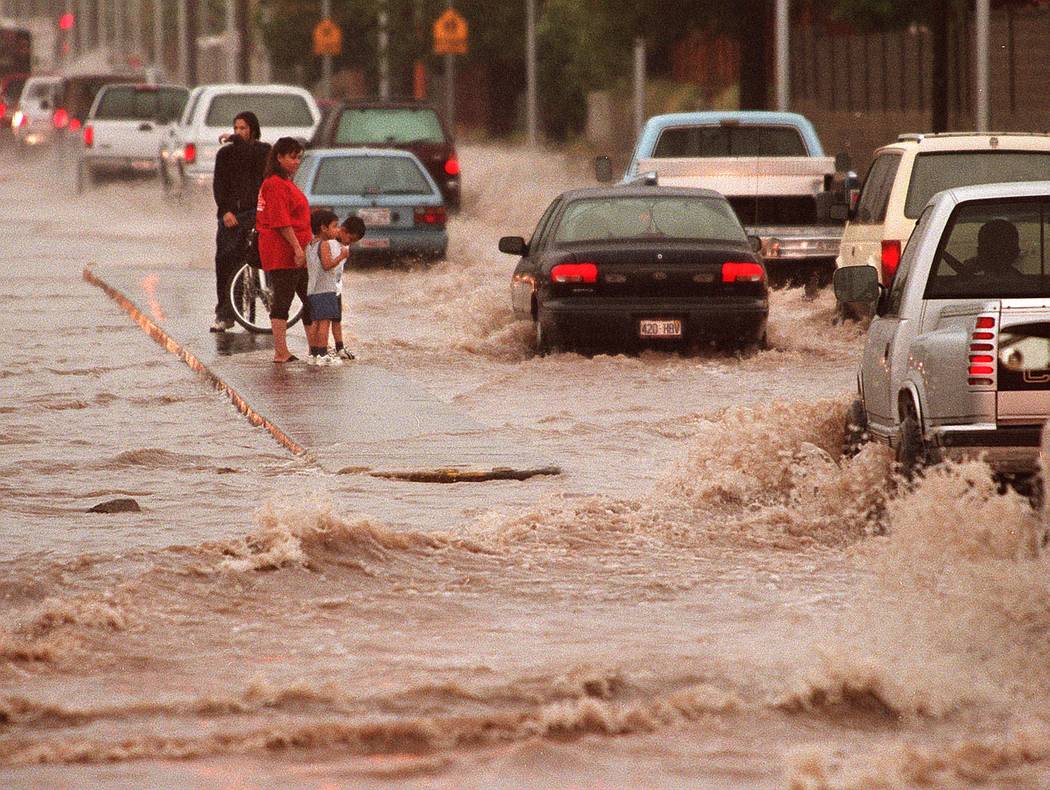 A flooded intersection at Washington and Pecos. (Las Vegas Review-Journal) 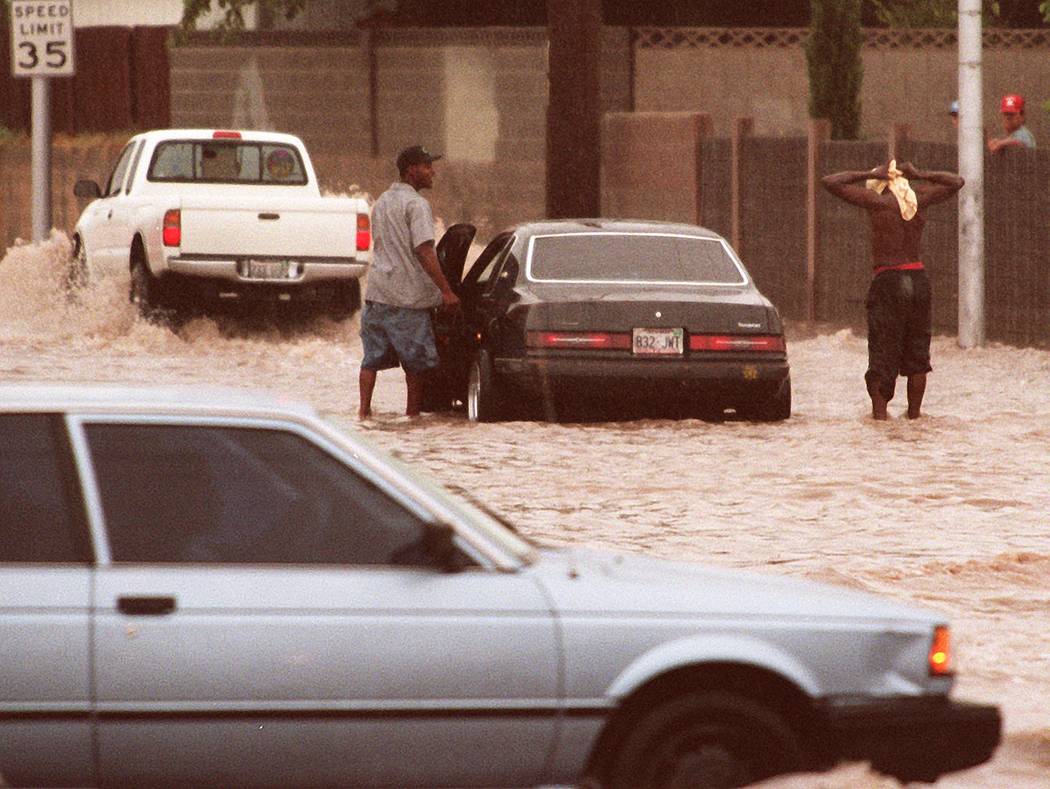 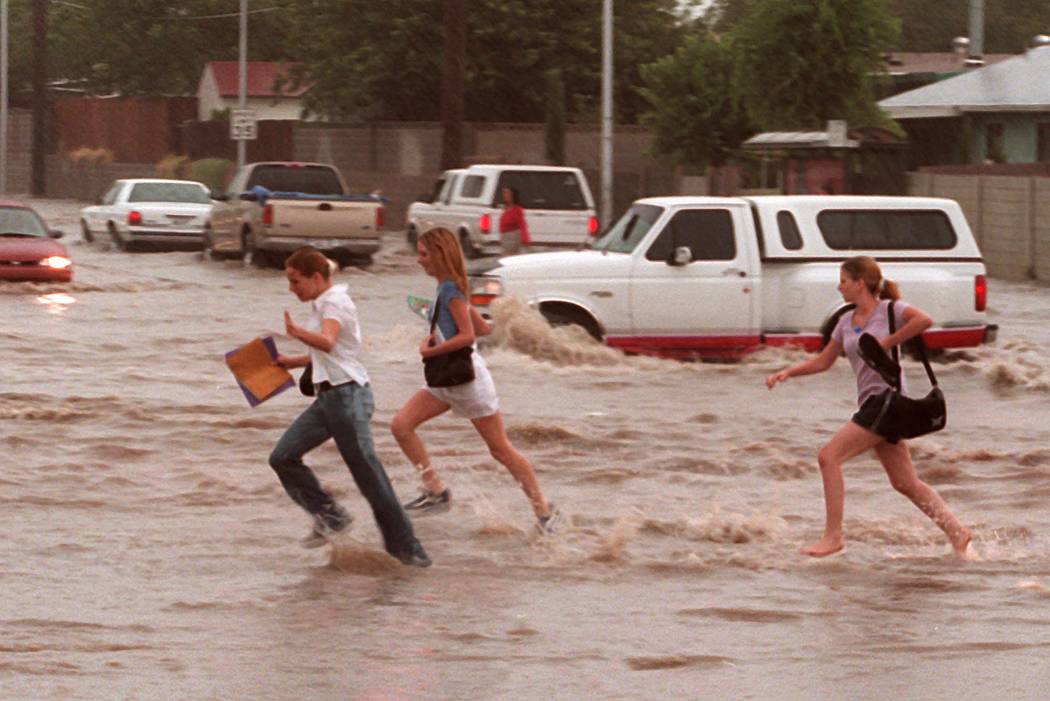 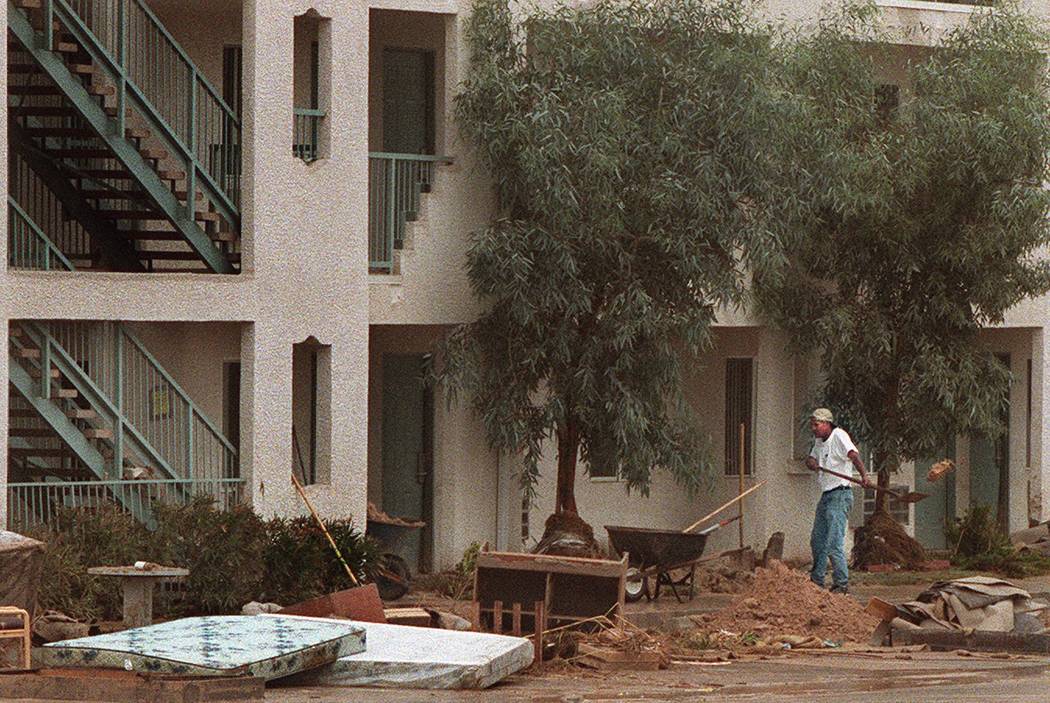 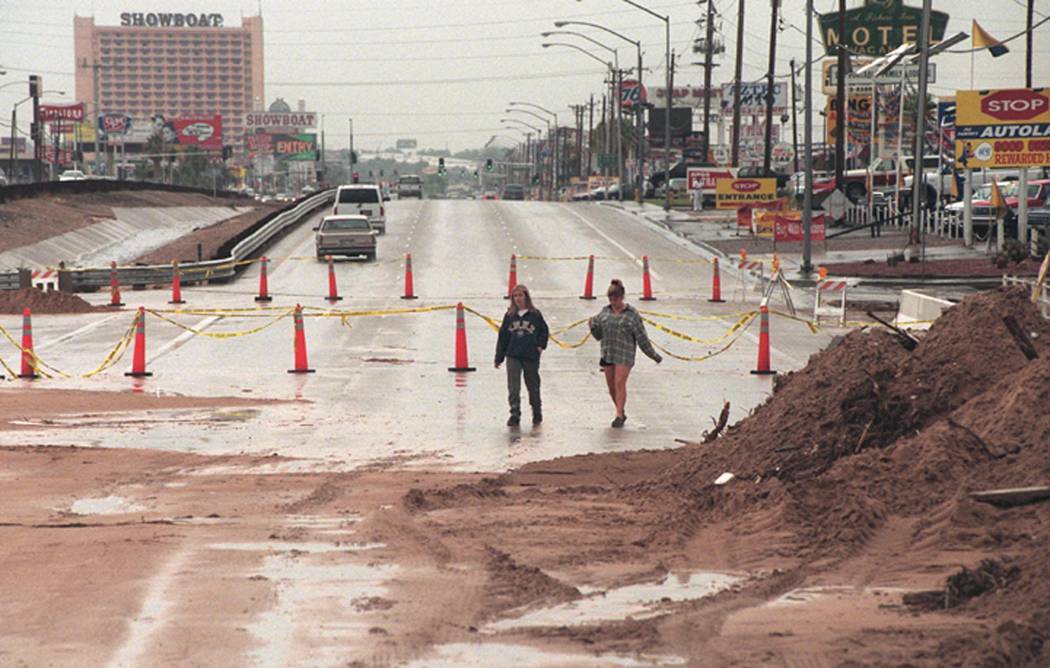 Bobbie Hines and Alexandria DeLong walk on Boulder Highway, near the Miracle Mile trailer park in the aftermath of the flood on July 12, 1999. 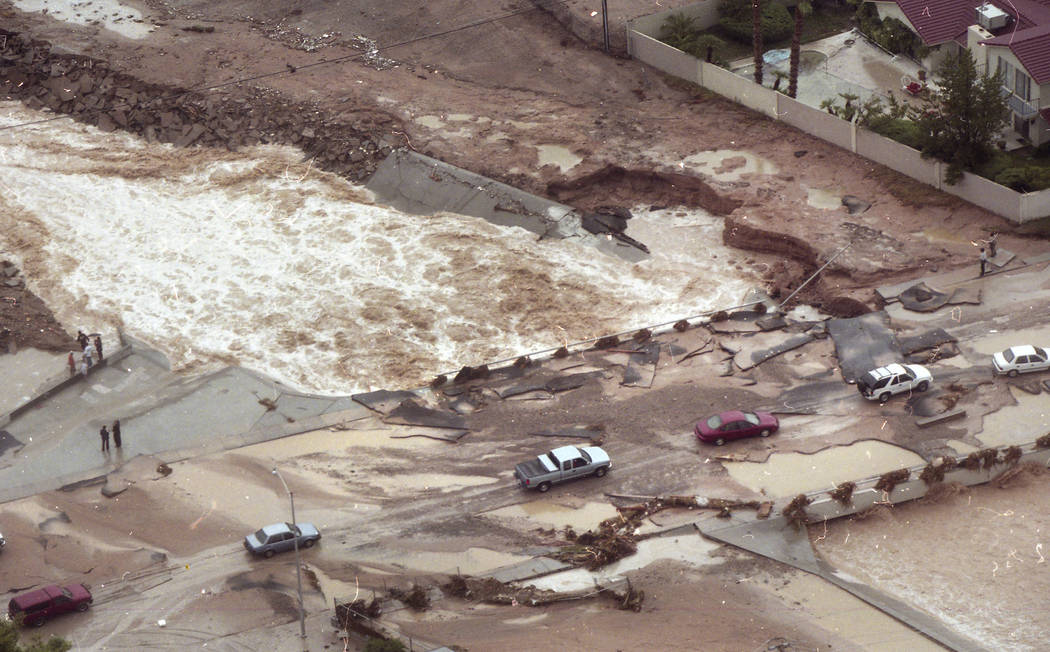 Cars pick their way across broken pavement on the Spencer Street bridge over Flamingo Wash on July 8, 1999 in Las Vegas. Heavy rains caused the wash to overflow its banks, damaging the street and cutting away at the banks (Las Vegas Review-Journal file)

Just before 11 a.m. on July 8, 1999, the National Weather Service logged the first few drops of a summer storm.

By 12:15 p.m., parts of the Las Vegas Valley were under water, and rain would continue to fall until about 3 p.m. The 100-year storm dumped billions of gallons of rain that damaged homes and businesses, flipped cars, flooded streets and caused millions of dollars in damage.

Las Vegas police rescue a man to safety after his vehicle was washed off Boulder Highway into Flamingo Wash East. (Las Vegas Review-Journal)

Weather service meteorologist Todd Lericos said the storm started on the west side of town and slowly moved toward the center. The Las Vegas Valley slopes downward from west to east, so even as floodwater ran downhill, the storm followed it.

“So you’re dropping more rainwater on the flood before it made it downstream, and that really amplified the flooding,” Lericos said.

Two people died in the storm. A woman was killed in a rain-related crash on Boulder Highway at the start of the storm, and police later pulled the body of a drowned man out of the Flamingo Wash.

911 dispatchers and emergency responders were overwhelmed by the number of calls coming in from panicked and stranded locals and tourists, and asked media to tell residents that they should only call 911 for immediate emergencies.

The valley usually sees just over 4 inches of rainfall a year, Lericos said, but some areas on the west side of the valley received at least 3 inches during the storm. A full 2 inches of rain fell on the west valley in a single hour.

David Weide, a UNLV geoscience professor at the time, estimated the storm dropped about 28 billion gallons of water on the valley, or enough to fill 1.4 million backyard pools.

Banks closed, and the Boulevard and Meadows shopping malls sent employees home early because of safety concerns. The area outside the entrance to the University Medical Center flooded, and women who had just given birth at Mountain View Hospital had to be moved because of leaks in the maternity ward.

Tim Szymanski, public information officer for the Las Vegas Fire Department, said he was heading to the scene of a supermarket roof collapse when he ran into a river of water on West Charleston Boulevard. He immediately called the weather service.

“I said, ‘You’ve got to get a warning out to the public that there’s a flash flood,’” Szymanski said. “I told him, ‘This is the bad one.’”

The newly constructed Flamingo Wash was overwhelmed by the flood and overflowed into the Miracle Mile mobile home park, which still sits on Boulder Highway south of Sahara Avenue. Three mobile homes were washed away, and others collapsed after rushing water swept the ground out from underneath them.

Police brought in a helicopter to pluck residents off roofs of homes as the water rose.

Frank Ashley, 81 at the time, told reporters he had to climb through the window of his trailer to escape because the water had completely blocked his front door. He clung to the roof of his home for about a half-hour before neighbors pointed rescuers in his direction.

“I have nothing to go back to,” he told the Review-Journal after the flood. “I don’t have anything left; the flood damage covered all my stuff.”

Across the valley, drivers found themselves trapped by rising water or stuck after their vehicles stalled. Some sat on the roofs of their cars and waited to be rescued.

“We were just picking people up left and right. We didn’t even have to look for people who were stuck; we’d just drive down the street a ways and find them,” Szymanski said.

At the time, the Las Vegas Fire Department was about half the size it is now with only 10 engines and between 300 and 400 firefighters. Szymanski said Engine 6 spent hours at the intersection of Rainbow Boulevard and Flamingo Road, rescuing drivers who tried to cross through the flooded streets.

“That was the big one,” he said. “That was the day we were the busiest. We had every unit out on the street.”

Strip properties weren’t spared. Cars and drivers were trapped in the Imperial Palace parking garage for four hours after the storm turned the garage’s entrance into a 3-foot-deep lake.

Thousands of gallons of water poured into the Forum Shops at Caesars Palace through a parking garage and back service entrance, leaving 2 feet of water standing in the center of the mall and flooding a portion of the casino floor.

The Golden Nugget and Las Vegas Convention Center also were damaged by floodwaters, but managed to remain open. The Manhattan Express roller coaster at New York-New York and the Stratosphere tower had to close as soon as the rain started falling.

Magician Lance Burton canceled one of his shows at the Monte Carlo, but illusionist David Copperfield decided that his show at Caesars Palace must go on. Many Strip attractions had to run with skeleton crews while employees were stuck in traffic on flooded freeways.

Rick Thomas, a magician who performed at the Tropicana, spent hours stuck on U.S. Highway 95 with two adult tigers in a trailer and a cub curled up in the front seat. He told a Review-Journal reporter that the tigers were fine, though they “got their paws wet.”

In July 1999, the Regional Flood Control District, then in its eighth year, had completed only a small portion of a plan to expand the city’s infrastructure.

“It would have flooded anyway,” Lericos said, “but without the washes and infrastructure we had at the time, it would have been catastrophic.”

Former Mayor Oscar Goodman said in 1999 that if the storm had struck a few years earlier, “it would have been a disaster to end all disasters.”

“Twenty five years from now, on the other hand, a storm of Thursday’s magnitude may be little more than a headache,” staff writer Mike Zapler wrote in a Review-Journal story published July 11.

Zapler was right — in the decades following the storm, the Regional Flood Control District made good on plans to expand the valley’s flood control infrastructure. In 1999, the improvements were less than 25 percent complete and flood detention basins were still being constructed.

The district has removed 54 square miles of flood zones and has another 25 years of work planned.

“If we had a similar event today, our flood control system would handle that amount of water without that type of visible flooding or property damage,” said Steve Parrish, general manager and chief engineer at the flood district. “Every facility we build is designed to handle a 100-year storm.”

Twenty five years from now, on the other hand, a storm of Thursday’s magnitude may be little more than a headache.

The phrase “100-year storm” is a bit of a misnomer, Lericos said. It refers to a storm that has a 1 in 100 chance of appearing on any day. Another 100-year storm had hit Henderson and Boulder City in 1997.

The Flood Control District has identified areas across the valley that could flood again during a 100-year storm and has an online tool to determine if a property is in one of those zones, to help residents purchase flood insurance.

In the 1970s, the U.S. Department of Agriculture released a report on the history of floods in Clark County, much of which was based on early newspaper accounts.

The Las Vegas Age reported the first recorded flood in Las Vegas on July 15, 1905: “The first storm of the summer made its appearance in the heavens Thursday afternoon. All night long thunder rolled and lightning flashed, but not until Friday morning did the clouds open and drench the parched face of the desert.”