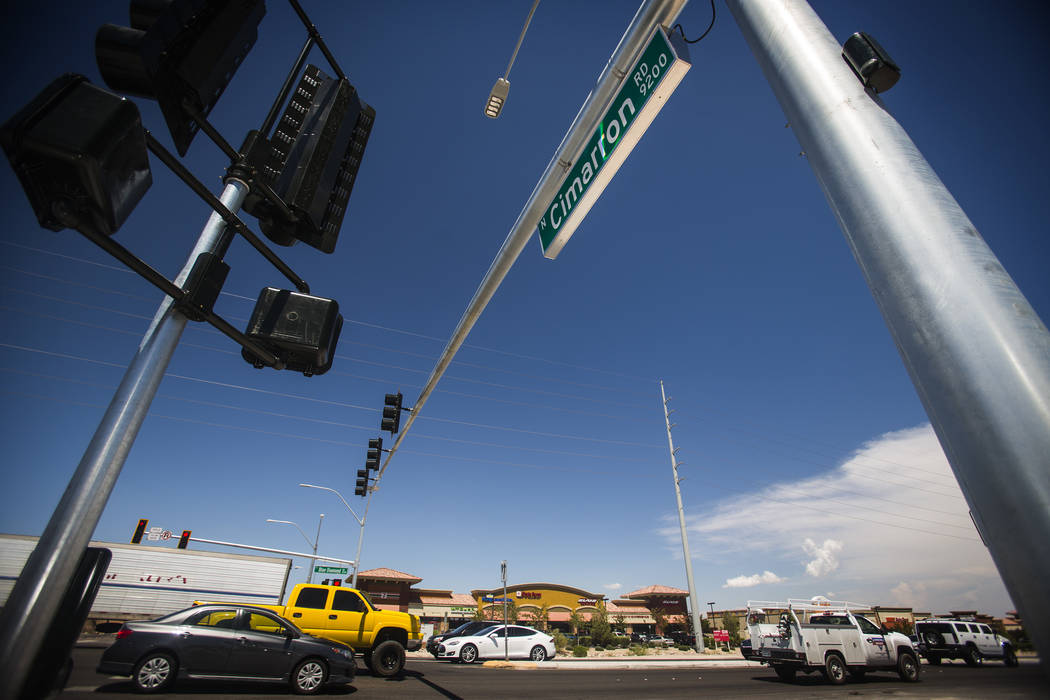 A traffic light at Cimarron Road and Blue Diamond Road as seen Thursday, Aug. 14, 2014. The Nevada Office of Traffic Safety is seeking a law to allow police to ticket drivers using traffic cameras, a technique that is currently not allowed in the state. (Jeff Scheid/Las Vegas Review-Journal)

State lawmakers could consider a bill next year aimed at nabbing speeders and red-light runners with cameras.

The Nevada Office of Traffic Safety is requesting a bill that would allow law enforcement agencies to use stationary automated traffic enforcement cameras.

If ultimately adopted during the 2019 legislative session and signed by the next governor, the proposed bill would overturn a state law that prohibits law enforcement agents from using cameras to crack down on traffic violations.

“Even though there would be no requirements to use cameras and no set deadlines, it would allow municipalities to decide if this is a tool they want to use,” said Andrew Bennett, a spokesman for the state Office of Traffic Safety.

“This isn’t a replacement for boots-on-the-ground enforcement,” Bennett said. “It’s just a tool that’s not being used here, and we believe it could be implemented to help save lives.”

The National Transportation Safety Board lists cameras as a key enforcement measure to combat speeding and specifically recommended that Nevada and six other states deploy the cameras as a way to bolster safety and decrease the number of traffic-related deaths.

Supporters have said cameras would make crashes caused by speeding motorists less frequent, while opponents say the technology could lead to more accidents caused by drivers wanting to avoid a citation.

“The North Las Vegas Police Department will always look into any tools that will allow us to run smoother and more efficiently,” North Las Vegas police spokesman Aaron Patty said. “So this is something that we would definitely explore down the line should it get passed.”

Automated enforcement was outlawed by the Legislature in 1999 amid concerns about the reliability of relatively new technology. The tools may be used only if they are directly controlled or held by a law enforcement officer.

“I think we can all agree technology created in 1999 is like night and day compared to the technology that’s available today,” Bennett said.

Las Vegas police Sgt. Paul McCullough, of the traffic bureau’s fatal detail, said speeding is the fourth-most-common traffic offense that leads to fatal collisions locally, after drivers’ failure to stay in their own lane, failing to yield to a right-of-way and pedestrian errors.

Although Metro has not taken a stance either way, McCullough said he would support any tool that could pump the brakes on speeding motorists.

“I feel speeding is the largest contributor to running red lights,” McCullough said. “If drivers start getting tickets for it, they’ll be more aware of the consequences and slow down.”

Henderson police Officer Rod Pena said his department does not have an opinion on the proposal, but he said the department will enforce and support any law enacted by the Legislature.

Trooper Jason Buratczuk of the Nevada Highway Patrol said his agency uses cameras only to monitor traffic conditions on freeways across the state. Automated enforcement cameras, he said, would be more useful for municipal police departments patrolling the streets.

“I have never heard of us planning to use any cameras for enforcement, and I’ve been here almost 13 years,” Buratczuk said. “I’m sure there would be no objection because it would just further increase a driver’s safety while on the road.”