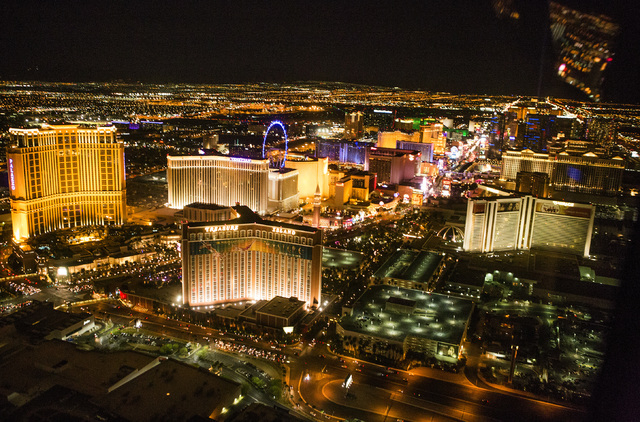 Both the Metropolitan Police Department and the FBI believe there are “no credible threats” to the Las Vegas Valley after a video featuring footage of San Francisco and the Las Vegas Strip was released Monday.

In social media circles, the video reportedly came from the Islamic State group, but neither Metro nor FBI offices in Las Vegas, San Francisco or Los Angeles could confirm the video’s legitimacy, which the FBI has done in the past when Islamic State videos are released.

The FBI’s national office could not be reached for comment Monday.

The video is about 10 minutes long, and features a seconds-long snippet of the Strip near the clip’s eight-minute mark. Soon after, shots of the Golden Gate Bridge and a street in San Francisco can be seen.

As of Monday afternoon, the video was removed from YouTube, Metro spokesman Larry Hadfield said.

Whether or not the video is legitimate, both agencies released statements about its existence.

Metro said the video’s message and use of the Strip are “not surprising, and appear to be another attempt by the terrorist group to inspire and motivate other lone actors,” like the man who gunned down clubgoers at Pulse, a gay nightclub in Orlando, Florida, this month.

“Despite the fact that we deem no threat attached to the video, the posture of the LVMPD and its partners during the upcoming holiday weekend is to remain vigilant with increased patrols in high-profile areas like the Strip, clubs, malls, etc.,” Metro said, clarifying that patrol increases were already scheduled for the holiday weekend, and that patrols did not change in response to the video.

“We ask the public to do the same and report any suspicious activity or persons,” the Metro statement concluded.

The FBI San Francisco office also acknowledged the video and echoed Metro’s sentiments: “The video didn’t spark our interest as being a credible threat.”

In November, a video confirmed to come from the Islamic State group featured clips of New York City. At the time, the city’s mayor, Bill de Blasio, also said the clip posed no credible threat.

Regardless of the video, Prentice Danner, a spokesman with the FBI San Francisco office, said the bureau is concerned generally about “homegrown violent extremists — lone offenders inspired or radicalized in relative privacy.”

Danner encouraged the public to contact a local FBI office “if you do suspect a family member, friend or acquaintance is becoming radicalized.”