MINE OVER MATTERS
With ingenuity, man has made Boulder City shaft his castle 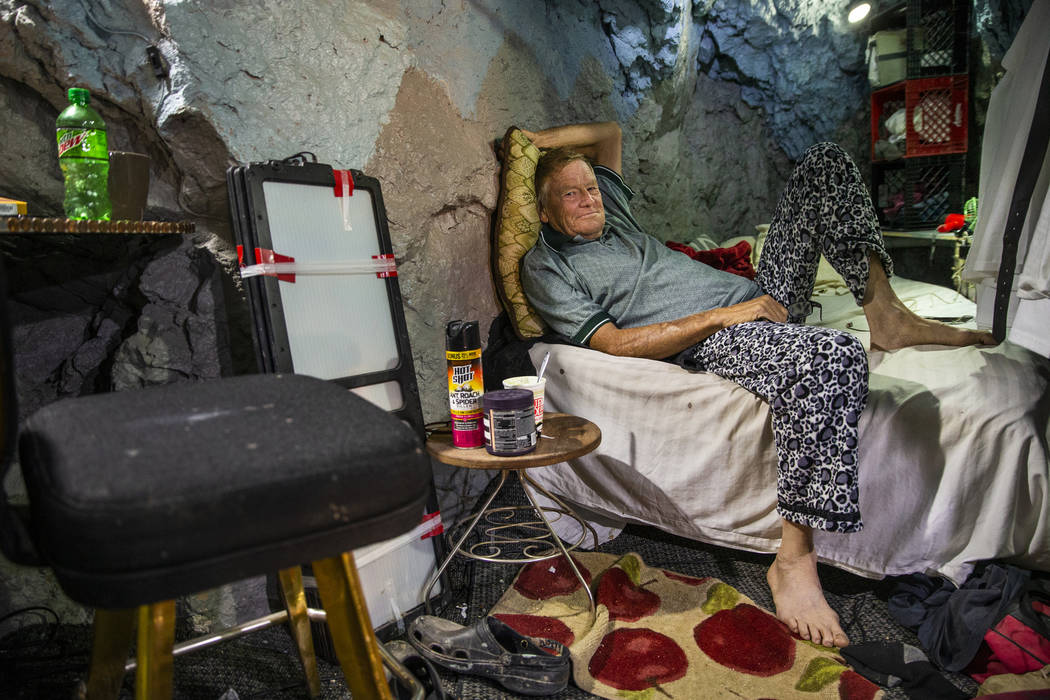 Richard Roman relaxes on his bed while living in a former mine in the hillside above the River Mountains Loop Trail east of the Railroad Pass Casino on Tuesday, Nov. 19, 2019, in Boulder City. (L.E. Baskow/Las Vegas Review-Journal) @Left_Eye_Images 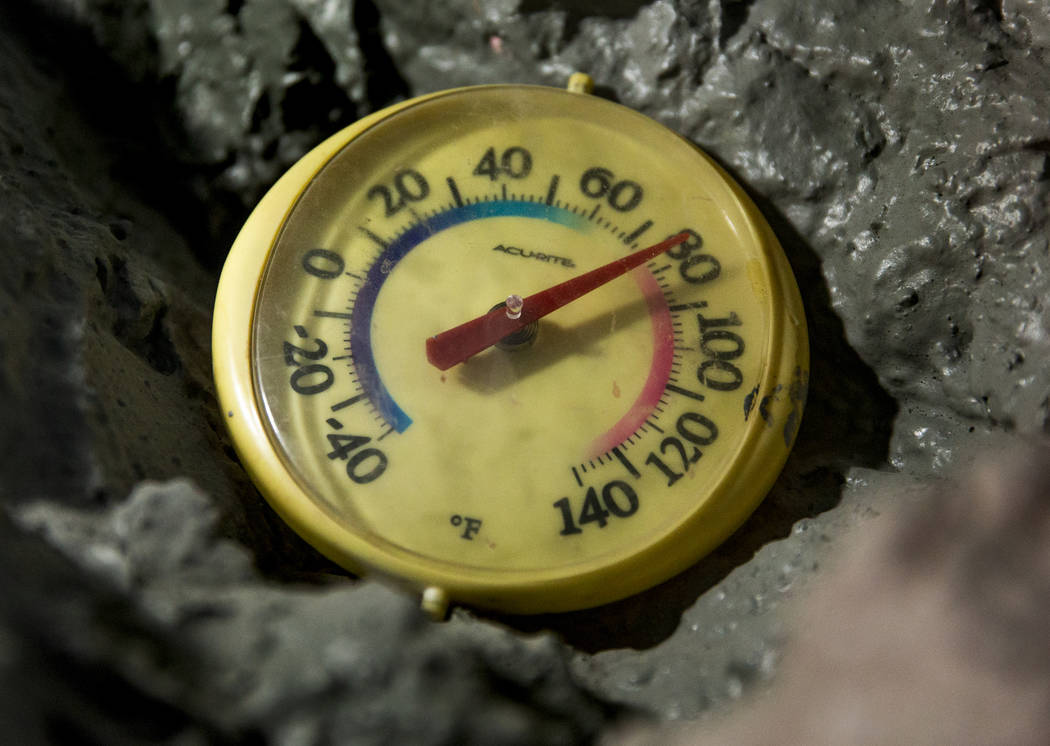 The temperature in Richard Roman's mine home ranges between 70-85 degrees tucked in the hillside above the River Mountains Loop Trail east of the Railroad Pass Casino on Tuesday, Nov. 19, 2019, in Boulder City. (L.E. Baskow/Las Vegas Review-Journal) @Left_Eye_Images

Richard Roman lives by few rules. But one he made up himself: When you’re in hell, move a few ZIP codes away and make your own heaven.

His heaven is a simple life at a surprisingly cozy encampment in an abandoned mine shaft above Boulder City, just 26 miles southeast of the glitzy and glamorous city that wore him out.

Roman, a tall 68-year-old with boyish blonde hair, intense dark blue eyes and a weathered face that recalls a younger Hugh Hefner, freely acknowledges that his struggles with drugs and alcohol played a big role in his descent into homelessness.

“I’ve always liked the nefarious kind of life,” he said with a rueful grin.

But through it all he retained the resourcefulness of a modern-day Robinson Crusoe, which has enabled him to convert his cavern into an off-the-grid home with a certain subterranean charm.

The shaft, which descends about 20 feet into the rocky ridge, now features two swinging wooden doors locked into place using spray foam sealant; a customized mattress cut to fit into an elevated corner of the cavern; and an old fan salvaged from a scrapped Nissan Altima that pumps air into the hole to maintain a comfortable 85 degrees on even the hottest days. Roman lovingly painted the slabs on the ceiling and walls gray and adorned them with various knickknacks, including a paddle inscribed with the word “Raiders.”

A $2,000 solar panel he saved up to buy powers several LED lights and batteries scattered around the roughly 160-square-foot living space, whose floor is covered by cast-off casino carpet.

On a recent morning at the mine, Roman used a propane tank to brew coffee, which he shared with a neighbor who has been sleeping above him lately on a cot in the open air. The two sat in lawn chairs in what might be called the foyer and talked about heroin addiction.

Roman said he has been living in the shaft for seven years, but Boulder City officials only recently became aware that he and about four other homeless campers living in far more primitive circumstances were squatting on the undeveloped land owned by the city.

Last month a horseback posse of police officers came to pay a visit but left without making any attempt to coax Roman out of his cave.

“They like coming in here and looking at things,” Roman said of the officers. “They said everything is OK. But if they did say I have to go, I would say thank you for the time.”

Boulder City has a population of less than 16,000 and more than 200 square miles of undeveloped land. But with few social services available, the open spaces are only used by a few handfuls of homeless individuals, city officials say.

Last year’s annual homeless census counted 12 individuals in Boulder City, a number Parks and Recreation Manager Julie Calloway acknowledged might be a little low because the population ebbs and flows.

But even though the problem isn’t a major headache, the city recently formed a homeless task force of 11 that Calloway heads. The group has only met twice, but it plans to reconvene after Thanksgiving.

“This is about getting ahead of the eight ball, so to speak,” she said.

The task force’s mission is to provide recommendations on policy and possible resources for the homeless for the City Council to consider.

Already the city has discussed changing its code to limit camping to certain locations and banning urination or defecation in public. Also under consideration is a system in which police officers would try to direct homeless people to available provider services.

But Roman insisted he doesn’t need services, whatever they may be.

‘If you wanted anything, you made it’

Roman attributes his knack for building things to a “hayseed” youth living on a farm in Nebraska, attending Catholic school and hating every subject except speech.

“There, if you wanted anything, you made it,” he said.

It was something that stayed with him throughout his life, even though he didn’t always draw on it. After he graduated high school in 1969, he said, he moved to California, where he repossessed cars in the Hunters Point neighborhood of San Francisco. He also dabbled in the sale of guns and cocaine.

“That was exhilarating to me,” he said. “I was the whitest punk in the neighborhood.”

As he grew older, he worked at aircraft salvage companies and as a machine designer. He built wood-burning stoves. He learned how to fly planes.

But his vices, which he lists as alcohol, gambling, sex, cocaine and methamphetamine, made a mess of his personal life.

He was married for 23 years and had two sons before getting divorced in 2000.

Roman moved to Las Vegas and worked until 2008, when he tested positive for cocaine and lost his job at Century Steel Inc. For three years, he stayed at the Salvation Army and volunteered in the kitchen all day so he wouldn’t be subjected to the violence of the streets.

“There’s things you can’t unsee,” he said. “You can get PTSD from looking at that.”

When life in the city became untenable, Roman came to Boulder City to check out the abandoned mine shaft after hearing about it from a friend who lived nearby.

“When I first checked it out, rats were afraid to come in here, it was so dirty,” he said, recalling the trash, old bus passes and outdated receipts that filled the hole.

Vision in a horoscope

But Roman said he had a vision of what it could be after he checked his Pisces horoscope in the newspaper later that day.

It read, “Do not be afraid to enter the cave because what is in there you’ve been looking for all your life.”

While that may have been a slight overstatement, after cleaning the shaft and slowly making improvements Roman said he’s grown comfortable with his surroundings.

For one thing, it’s a convenient location, situated just feet away from a paved bike path that winds behind Railroad Pass Casino, close to the highway and just 10 minutes from a bus stop where he can take a 20-minute ride into town. It’s also mostly peaceful — except when trains tear down the tracks or helicopters buzz overhead.

Roman said he could move back to Las Vegas and try to get an apartment, though that would be a stretch with an income of just $1,000 a month from Social Security.

“I’m not ready for that, though,” he said, underlining his aversion to city living.

Roman’s biggest battle is with the critters that invade his home — spiders, worms and other assorted crawly creatures.

Once, he said, he captured a Mojave rattlesnake with a contraption he fashioned out of an old tennis racket.

He also had to deal with a flood that poured into his lair last July.

Though he generally feels safe, he keeps a loaded Brazilian Taurus Model 85 revolver by his bedside.

In the years since moving in, Roman has seen people come and go.

Some whisper to themselves. One had spent most of his life in an Indiana prison.

A 400-pound man died of pneumonia. Another man, a 75-year-old, had a heart attack and collapsed in a heap by the railroad tracks.

When the city and the Nevada Division of Minerals came to check out the area at the request of Boulder City officials this month, they put barbed wire around a 25-foot-deep hole not far from Roman’s encampment.

“Danger: unsafe mine. Stay out, stay alive,” it reads.

But Garrett Wake, chief for the Nevada Division of Minerals in Southern Nevada, classified Roman’s home as an adit — an opening driven horizontally into the side of a mountain — and said it didn’t present much of a danger.

“Somebody was probably chasing something they thought was a mineralization of gold or silver, and it didn’t go anywhere. An actual mine would be much more extensive,” Wake said.

The division sealed dozens of abandoned mines last year in the openings of hills above a growing southwest Las Vegas Valley neighborhood where homeless people were living, but Wake said that was a unique partnership with Clark County.

“Those in Boulder City, they’re so small, and I wouldn’t say they’re an imminent and serious danger to any local population,” he said. “It’s on city land, and it’s really up to the city to determine what they want to do with it.”

Lisa LaPlante, a city spokeswoman, said what happens next will be a city policy decision.

“There are a number of possibilities (where) we can go from here, and we’re still weighing our legal options,” LaPlante said.

For his part, Roman said he expects he might have to leave at some point, and he is making preparations just in case.

“Everything has a turn of events,” he said. “I’m sure there’s more turn of events coming to me until I hit that wall. And I’m OK with that.”

His Plan B is a teepee, 8 feet in diameter, that he created out of plywood in another undisclosed location.