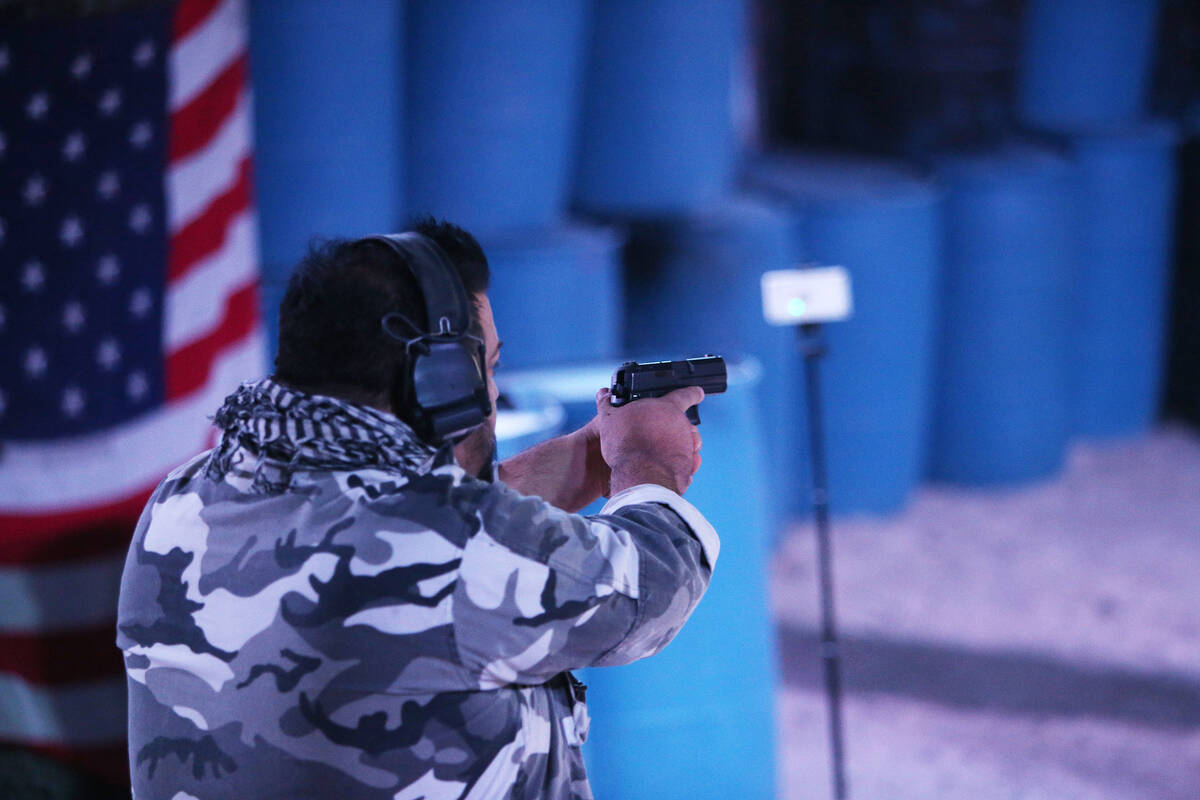 A Sunday concealed carry event in Las Vegas that listed several Republican political candidates as special guests, featured a presenter who displayed blatantly racist slides on a big screen during a presentation, according to videos and screen saves of the event posted online.

The annual VegasCCW event drive was held at the Clark County Library, 1401 E. Flamingo Road, according to an advertising flyer promoting it. Videos of the event subsequently posted on Twitter, along with screen saves and video posted to the Twitter account PatriotTakes, show presenter Nephi “Khaliki” Oliva making a speech to a crowd of people. Oliva goes by Nephi Khaliki on his Twitter account.

During the presentation, a slide appears on a screen with the header “Firearm Safety for Black People.” A bulleted list then says, “ALWAYS shoot the gun right side up. ALWAYS lick the chicken grease off your fingers before shooting. ALWAYS make sure there’s a white person around so you have someone to blame for everything that goes wrong in your life. Always aim for small children to ensure you actually hit another gang member.”

Oliva and VegasCCW did not immediately respond to requests for comment Wednesday. However, Oliva posted on his Twitter account that the slide was apparently an attempt at comedy.

“People got equally roasted in my class at the library last Sunday,” Oliva tweeted. “I am a minority FYI.”

He also tweeted that “I am a minority and I was the one telling those jokes. I am an Afghan American and I come from a Muslim family. For you to use my comedy and my event as fodder for your political nonsense is shameful. That audience was MY audience and it was comprised of a wide mix of races.”

Video of the event appears to show some audience members laughing while some can be heard on audio expressing their disdain for the racist slide. Another slide in the presentation made fun of white people.

“The slide that was used at the CCW class that I was invited to attend, but did not attend and had no involvement with whatsoever, is abhorrent and I condemn the blatant racism,” Gilbert said. “Period.”

Mendenhall said she was invited to the event so she attended and made a speech about the First and Second Amendments before leaving. She was not present when the presenter displayed the slide and did not know about the presenter’s content ahead of time.

“I do support concealed carry,” Mendenhall said, adding, “I was there backing the individual attendees.”

Roberts said, like Mendenhall, he attended and gave a speech but was not present when the slide was displayed.

“I wouldn’t use or condone the use of material like that,” Roberts said.

A spokesman for Fiore said she was out of town at the time and not in attendance. Lee could not immediately be reached for comment. Malgeri issued the following statement on his Twitter page:

“I am a strong supporter of firearms education and the Second Amendment,” he wrote. “I have never attended one of Nephi’s classes before and have no role in the curriculum, but I don’t believe that Nephi is in any way racist. I understand that his presentation included content directed at several different groups represented in the audience but that he mostly directed his humor at himself. The constant ‘moral outrage’ attacks on free speech and comedy in particular have become tedious, and are resoundingly rejected by most regular people, including me.”

“This has nothing to do with a CCW course,” Jake Wiskerchen tweeted in response to Oliva’s videos. “Now, thanks to bad judgment, anti-gun people are running wild with cherry picked screen cap accusing gun owners of being a monolithic culture led by racist Republicans.”

Another poster, Derek, said “This doesn’t belong in a CCW class. But you seem to enjoy playing the part of the fool as any court jester would.”

Kelvin Watson, executive director of the Las Vegas-Clark County Library District, was not available for an interview. However, in an emailed statement from the district, he said the “Library District condemns hate speech in any form and will be meeting to review our room rental policy. The group in question rented a meeting room from the Library District and it is in no way connected to our organization, beliefs, or views.”

ACLU Executive Director Athar Haseebullah said the racism displayed at the event was disgraceful. He also questioned why politicians didn’t better vet the event and why it took days for some to condemn the information presented.

Roxann McCoy, president of of the NAACP Las Vegas, said the presentation “goes beyond poor taste. It is, pure and simple, callous racism.”