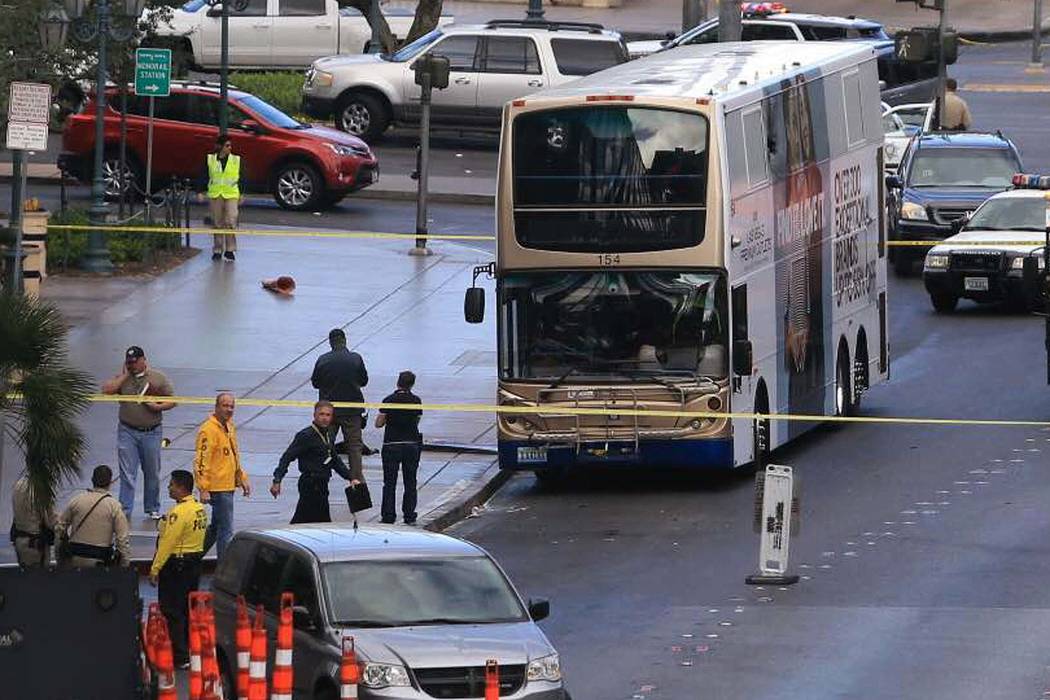 Police investigate the scene of a shooting on an RTC bus that left one person dead and one injured outside the Cosmopolitan, March 25, 2017. (Brett Le Blanc/Las Vegas Review-Journal) @bleblancphoto

Surveillance cameras mounted inside public buses will be able to stream live footage by the end of this year to law enforcement agencies during emergencies, the Regional Transportation Commission of Southern Nevada said Thursday.

The move comes after Metropolitan Police Department officers could not see a gunman barricaded inside an RTC bus during a lengthy standoff that brought traffic on the Strip to a halt March 25.

“It gives law enforcement the ability to see what’s going on so they can make a decision on how to respond,” said Carl Scarbrough, the RTC’s director of technical equipment and transit amenities.

It will cost $225,000 to stream the live footage if the RTC can use existing wireless internet routers on the agency’s fleet of 440 buses, Scarbrough said. The price could more than double, however, to roughly $500,000 if the agency has to upgrade the system with additional equipment.

The RTC and Metro police have spent several months testing the system on a bus that primarily operates on Route 206, which runs along Charleston Boulevard between Downtown Summerlin and Sloan Lane in the east valley, Scarbrough said.

During the March standoff, a giant vinyl advertisement covered the widows of a doubled-decked Deuce bus parked in front of The Cosmopolitan of Las Vegas during a standoff that lasted more than four hours.

The suspect, Rolando Cardenas, could see outside the shaded windows, but police could not see him. He was later arrested without incident.

RTC officials had tested other types of vinyl coverings but found they made little difference, Scarbrough said. The agency will continue to use the same type of material for the wrap-around ads.

“We thought maybe we should not wrap those buses, but instead we worked with Metro to find a solution that is more appropriate,” RTC General Manager Tina Quigley said. “This way, they can see entirely inside the bus and be able to actively manage any high-threat situation.”