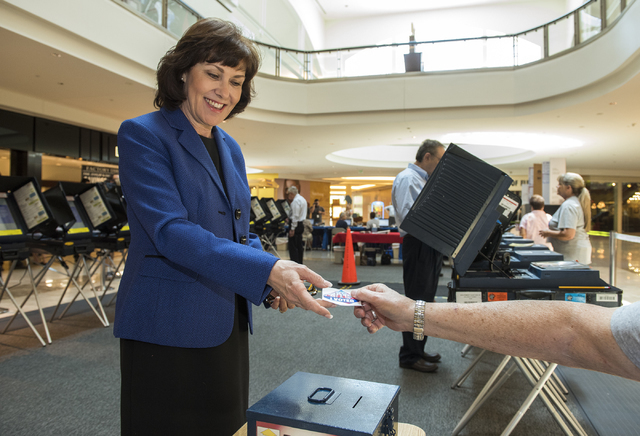 Jacky Rosen, receives her "I Voted" sticker after voting at the Galleria Mall at Sunset in Henderson, Nev., on Thursday, June 2, 2016. (Martin S. Fuentes/Las Vegas Review-Journal)

Jacky Rosen easily grabbed the Democratic nomination for Nevada’s 3rd Congressional District, but she remains a political unknown to most Southern Nevadans.

A longtime computer programmer and consultant, Rosen had zero political experience before throwing her name in the hat in January to replace outgoing Rep. Joe Heck, who is running for the U.S. Senate. Outside of the local Jewish community, most Clark County voters know little about the president of the Congregation Ner Tamid who U.S. Sen. Harry Reid personally recruited to the race.

Rosen, 58, is running for a district that encompasses the cities of Henderson and Boulder City, the tiny town of Searchlight, as well as much of the south and southwestern portions of the Las Vegas Valley. It is a competitive swing district that has been held by the Republican Heck since 2011, but one President Barack Obama won by less than a percentage point in 2012. Democrats hold just a 5,000-registered voter lead in the district.

Tarkanian, 54, is a far-right conservative who is running a campaign that somewhat mirrors Donald Trump’s. Like Trump, he’s in favor of a “strong wall” between Mexico and the U.S., opposes taxes and wants to make America “respected and feared again,” according to his campaign website. Tarkanian even introduced the presumptive GOP Presidential nominee at a rally in June.

Tarkanian declined interview requests from the Review-Journal for this story, saying through a spokesman that he was upset over a previous story the reporter wrote.

Tarkanian, 54, had a strong showing in the primary, fending off over $1.5 million in late-election dark money ads to knock off party favorite state Sen. Michael Roberson with relative ease.

But that surprise walloping hasn’t stopped some pundits from predicting a switch from red to blue for CD-3. When the matchup of Rosen and Tarkanian became official, the Universality of Virginia’s Center for Politics’ Larry Sabato switched his prediction for the district from a “tossup” to “leans Democratic.”

The lack of name recognition didn’t hurt Rosen in the primary, although the competition was less than stellar. Rosen blew past the competition by gathering over 62 percent of the Democratic votes and nabbing the party nomination. Her nearest opponent, attorney Jesse Sbaih, received just 12.9 percent of the votes.

Rosen checks some key boxes for Nevada Democrats: She’s pro-choice and pro-immigration, believes in the need for a “higher livable wage,” and is a supporter of the Affordable Care Act. She has the backing of key figures such as Reid and former longtime Rep. Shelley Berkley. Rosen is also championing better protection of senior citizens, and preserving their access to Social Security and Medicare.

But beyond that, just who is this candidate handpicked by Reid?

Rosen was born and raised in Chicago before heading off to the University of Minnesota, where she graduated in the winter of 1979.

She fell in love with the emerging field of computer sciences. The field “just clicked” with her, Rosen said. But back in the 1970s, those degrees weren’t widely available, so she graduated with a degree in psychology while spending most of her free time in the school’s math lab honing her computer skills.

Her parents moved to Las Vegas while she was away at college, and Rosen made the choice to follow them out west after graduation.

There was just one problem: the subzero temperatures and snow covered the roads of Minnesota.

“I had to wait for the snow to melt to move across the country,” she said.

She got a job with Summa Corp. shortly after moving to the valley. But the pay was anything but great, as Rosen said she made just $12,000 that first year. Rosen needed to make more in order to live in the valley, and took a summer gig as a waitress at Caesars Palace. She was a member of Culinary Local 226 for a few months.

The pay at Summa eventually got better, and Rosen worked there through the 1980s. She moved on to Southwest Gas before finally starting her own consulting business.

As she grew older, Rosen became more involved with her faith-based community.

For the past three years, the longtime Henderson resident was the president of Congregation Ner Tamid, the largest Jewish reform synagogue in the valley, before her term expired in June. Rosen described her time as the top temple administrator as the “most amazing time of my life.”

Her experience leading the synagogue and helping people on a personal level helped her make the big decision when Reid came knocking in January, Rosen said.

Things in her personal life just lined up for Rosen to run, she said. Her radiologist husband, Larry, has a stable practice and her daughter, Miranda, is out of the nest attending Princeton University.

Berkley, Rosen’s close friend and fellow Ner Tamid goer, said there were no indications that Rosen was even considering jumping into one of the most competitive congressional districts in the country.

But Berkley said she’s impressed with how natural Rosen already is on the campaign trail.

“You need to not only enjoy people, but you need to enjoy what you’re doing. And she certainly does that,” Berkley said.

As for the lack of experience, Berkley thinks it will actually be a strength for her friend during the election.