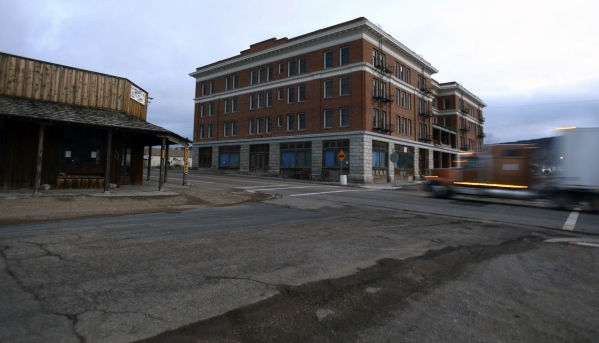 A semi passes the closed Goldfield Hotel on Dec. 19, 2007. The historic hotel was open a hundred years ago when the population of Goldfield was more than 20,000. Today only about 400 people live there. Jeff Scheid/Las Vegas Review-Journal 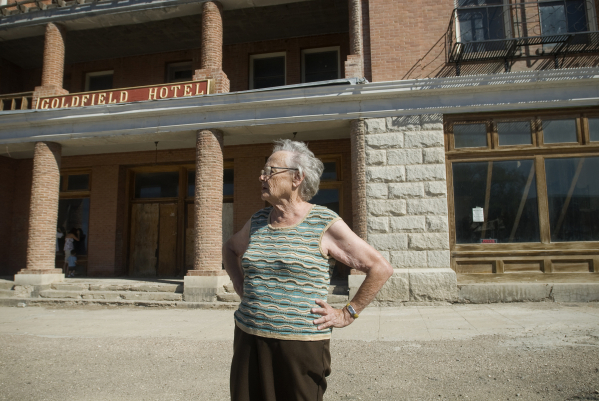 Virginia Ridgway stands outside the Goldfield Hotel on Sept. 11, 2009. When Ridgeay moved to Goldfield more than 30 years ago, the Goldfield Hotel‘s first floor was open to the public. Today the hotel is in disrepair and shuttered. For years, Ridgway held the keys to the hotel said to be haunted and took the curious inside for tours, but bad hips are forcing the 82-year-old to give up the ghost. Justin Yurkanin/Las Vegas Review-Journal. 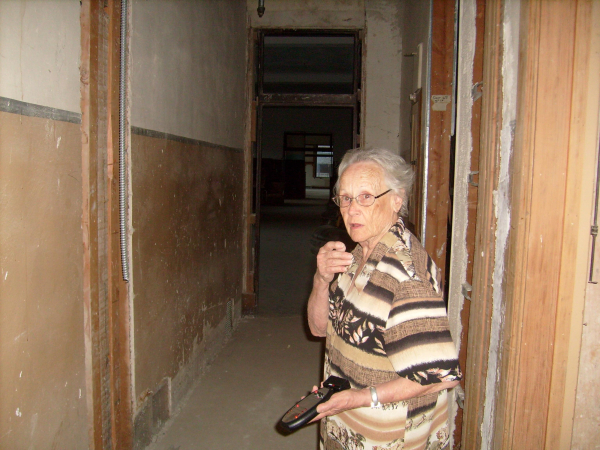 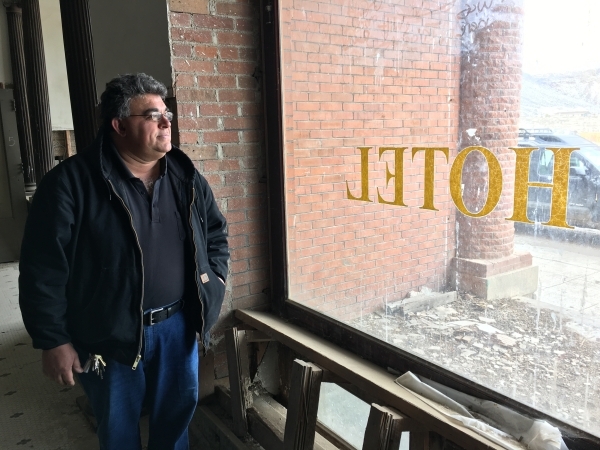 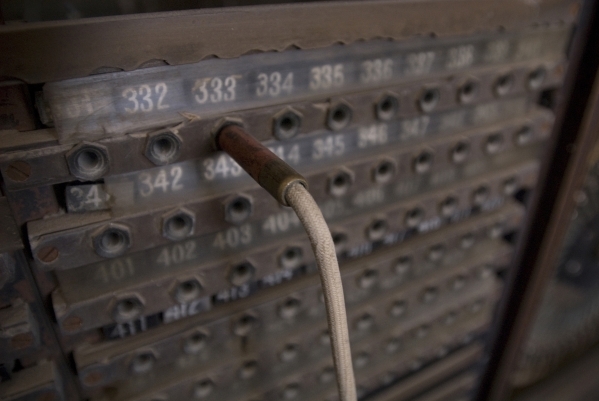 Like it‘s frozen in time a phone line is still plugged into a switchboard in the lobby of the Goldfield Hotel on Sept.11, 2009, in Goldfield. The hotel is in disrepair and is constantly being broken into by people enamored with the rumored paranormal activity in the building. Justin Yurkanin/Las Vegas Review-Journal 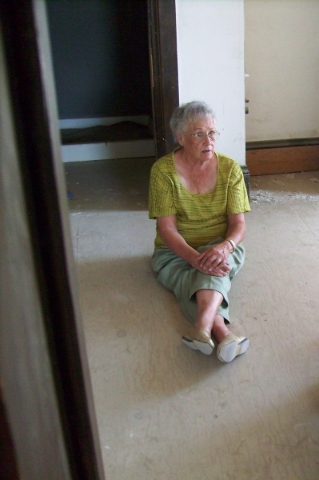 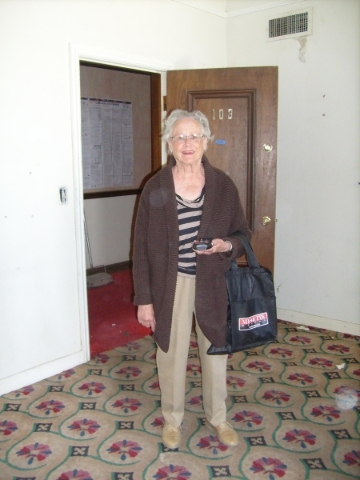 GOLDFIELD — For three decades, Virginia Ridgway has been the keeper of the keys to an inn known worldwide for its posh history and guests who so enjoyed the accommodations they refused to leave — the ghosts of the Goldfield Hotel.

The long-shuttered 150-room building celebrated its last paying customer in 1945. It sits forlornly empty at the center of a mining boomtown three hours northwest of Las Vegas.

But still the curious come: fans of the paranormal and history buffs who want a glimpse of the place once considered one of the most elegant overnight stays in America’s West. They park along U.S. Highway 95 to peer through the windows, scanning a classic revival-style lobby trimmed with mahogany that accommodates the original black-leather couches, guided columns and guest niceties now covered with dust.

They take pictures and flag down locals for questions. But there’s only one way to actually get inside and that’s to call the 82-year-old Ridgway, who lives just a block away. Some try to shove cash at her, others wave press credentials, but as Ridgway says in her smooth west Texas drawl, “I can’t let anybody in unless I’m with them.”

Of course, she’s always been partial to those who share her penchant for the paranormal.

But the aging gatekeeper is handing over her ring of keys. Two bad hips mean that the watchful one will soon step aside as the 24-hour caretaker.

“I just can’t do it anymore,” says Ridgway, who often must use a wheelchair. “I got two broke hips. I can’t even get myself up the front three steps to walk into that hotel.”

Carrying on will be Malek DaVarpanah, an antique-shop owner who, like Ridgway, carries a torch for the four-story hotel christened in 1907 in an opening ceremony where Champagne reportedly poured down the ornate front steps.

The Goldfield was the definition of luxury then, featuring running water and private baths, an on-call doctor, crystal chandeliers, an elevator and telephone service to every room — its U-shaped design ensuring that every guest room enjoyed an outside view.

The hotel shut its doors at the end of World War II; its last guests were officers and their families stationed at the Tonopah Army Air Field. In 1982, it was included on the National List of Historic Places.

DaVapanah, 50, who volunteers with Goldfield’s Chamber of Commerce, gets hundreds of calls a year from those seeking entry into the hotel, but always passes them on to the hotel’s longtime guardian.

“Most are persistent,” he says. “They say they’re willing to pay. They just want to get in there.”

Ridgway’s affinity for the Goldfield began in the 1960s. A fan of murder mysteries and a believer in the otherworldly, she insists there were people inside to greet her.

“There were people everywhere, in the lobby and in the hall,” she says. “Other people couldn’t see them, but I could.”

A decade later, she opened an antique and curio shop called the Glory Hole, located just across the street from the Goldfield.

Whenever she saw outsiders peering into the hotel’s windows, she walked over to fill them in on its history.

Eventually, its owner gave her keys to conduct free tours.

“You never charge for the things you love doing,” she says.

Over the years, the Goldfield has enjoyed some Hollywood-style exposure — appearing in the 1971 film “The Vanishing Point” as the site of a radio station. It has also played host to numerous cable-TV paranormal investigations shows such as “Ghost Hunters.”

Still, nothing frightens Ridgway about the Goldfield.

“To me this is a happy hotel,” she says. “The entities there choose to exist there.”

Over the years, Ridgway’s tours have made believers out of doubters.

“I didn’t believe any of that stuff before I visited the hotel with Virginia,” said Yvonne Roberts, whose father, Red Roberts of Carson City, is the hotel’s out-of-town owner. “My dad has always brushed these things off. But now I feel differently.”

Ridgway tells a tale of the spirit who lives on the first floor: a young woman named Elizabeth who she says was impregnated generations ago by the then-hotel owner.

Janice Oberding, who has known Ridgway for 15 years, says the key keeper has become a cult figure in the paranormal community.

“People who want to get in good with her always bring flowers for Elizabeth,” she says. “The last time I was there, Elizabeth’s room was just full of flowers and toys, which pleases Virginia to no end.”

Yet now months have passed since Ridgway has set foot in the hotel. On a recent day, she hands over the keys so DaVapanah can show a visitor around.

He stands outside in the winter cold, fiddling with the lock.

“Don’t be surprised if we get some unwanted visitors,” he says. “Once this door is open, people will be here. Everyone has stories. They see the open door and they flock like vultures.”

He quickly slides inside, showing off a hotel check-in desk with the ancient mail slots and telephone switchboard sitting silent. The Goldfield’s soon-to-be guardian says he likes the feel of the place, but prefers not to discuss whether he believes in ghosts.

But Ridgway believes. She’s even got a second-floor room picked out to inhabit after she dies.

“I’m kind of excited; it’s gonna be fun,” she says. “When visitors come, I’m going to spray them with gardenia cologne. That’s how they’ll know I’m there.” 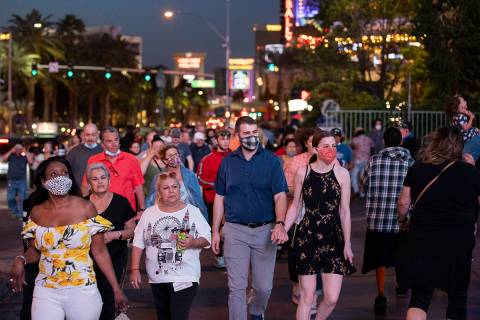 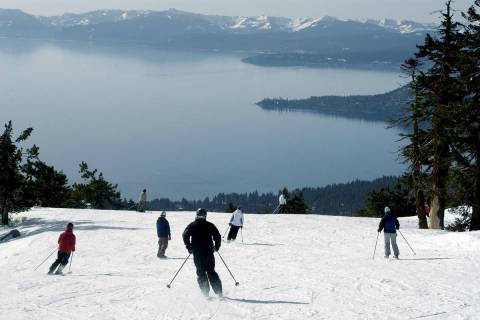