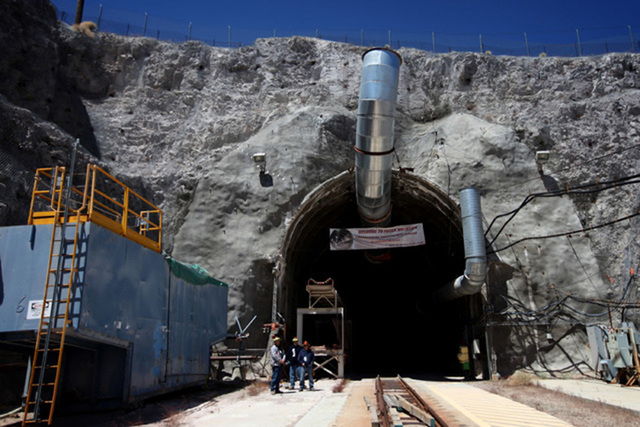 WASHINGTON – The Energy Department appears to be shopping new uses for Yucca Mountain that it no longer wants for disposal of nuclear waste, according to senior House Republicans.

Rep. Fred Upton, R-Mich., chairman of the House Energy and Commerce Committee, asked Energy Secretary Ernest Moniz in a letter Wednesday for information on the discussions. He demanded talks be put to a halt since Congress has not approved new activities at the site.

“We have learned that officials from the Department of Energy and the Defense Threat Reduction Agency have discussed the possibility of conducting activities at or near the Yucca Mountain site that are not related to the statutorily required uses for the site and adjacent lands,” Upton said in the letter that was also signed by subcommittee chairmen Reps. John Shimkus, R-Ill., and Tim Murphy, R-Pa.

The Energy Department had no comment. The office of Sen. Harry Reid, D-Nev., declined comment. Nevada state and county officials said they were unaware of any development.

A House Republican aide said it is believed DOE and the defense agency began discussions just in the past week or so, and one possible but unconfirmed activity involved a train derailment simulation.

Daniel Gaffney, a spokesman for the Defense Threat Reduction Agency, said in an email the agency “has never used the Yucca Mountain site for any testing activity, and we have no plans to do so in the future.

“DTRA has not and will not be doing any testing at the Yucca Mountain site,” Gaffney said.

The agency, based at Fort Belvoir, Va., is charged with countering threats from weapons of mass destruction including from nuclear, biological and chemical attack. The agency has conducted research and experiments on portions of the sprawling Nevada National Security Site, which is adjacent to Yucca Mountain and is also run by the Department of Energy.

The Yucca site 100 miles northwest of Las Vegas was planned as a high-level nuclear waste repository until the Obama administration terminated the program in 2010. Republicans in Congress and some Democrats charge the administration overstepped in closing the site that had been authorized by Congress in 2002.

“We are concerned of the legality and policy implications of any activities that may in any way affect the adequacy of the site for its statutorily required use for high level waste,” the lawmakers told Moniz.