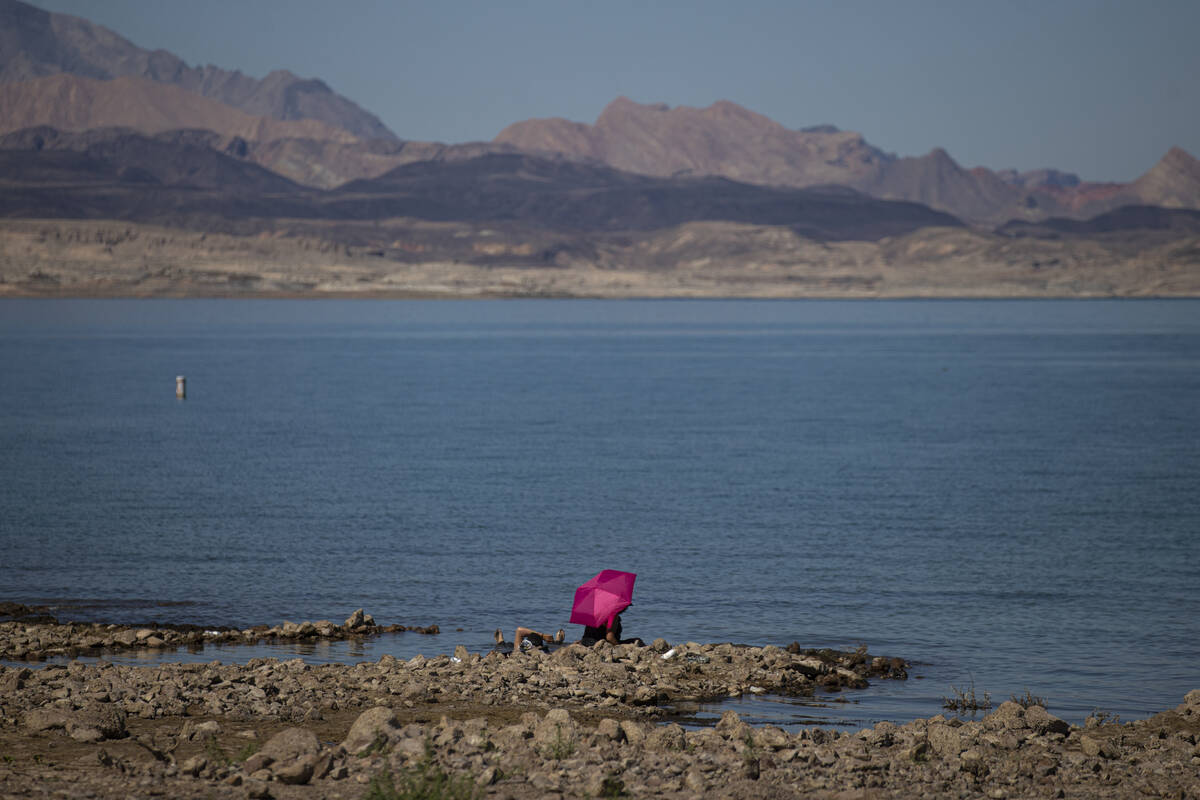 People hang out at Swim Beach, along the Boulder Basin and Boulder Beach area, at Lake Mead National Recreation Area, the day after human remains were identified for the fourth time since May, on Sunday, Aug. 7, 2022, in Las Vegas. (Chase Stevens/Las Vegas Review-Journal) @csstevensphoto 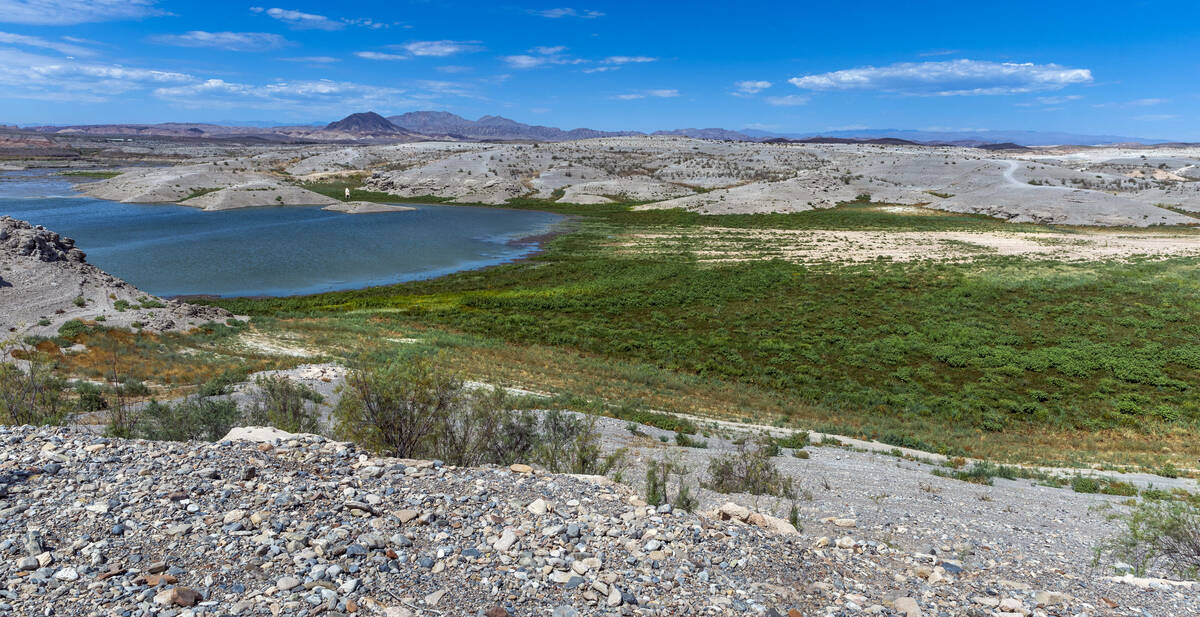 A boat sticking up along the shoreline in Government Wash is now surrounded by plants at the Lake Mead National Recreation Area on Thursday, Sep. 1, 2022, near Boulder City. (L.E. Baskow/Las Vegas Review-Journal) @Left_Eye_Images 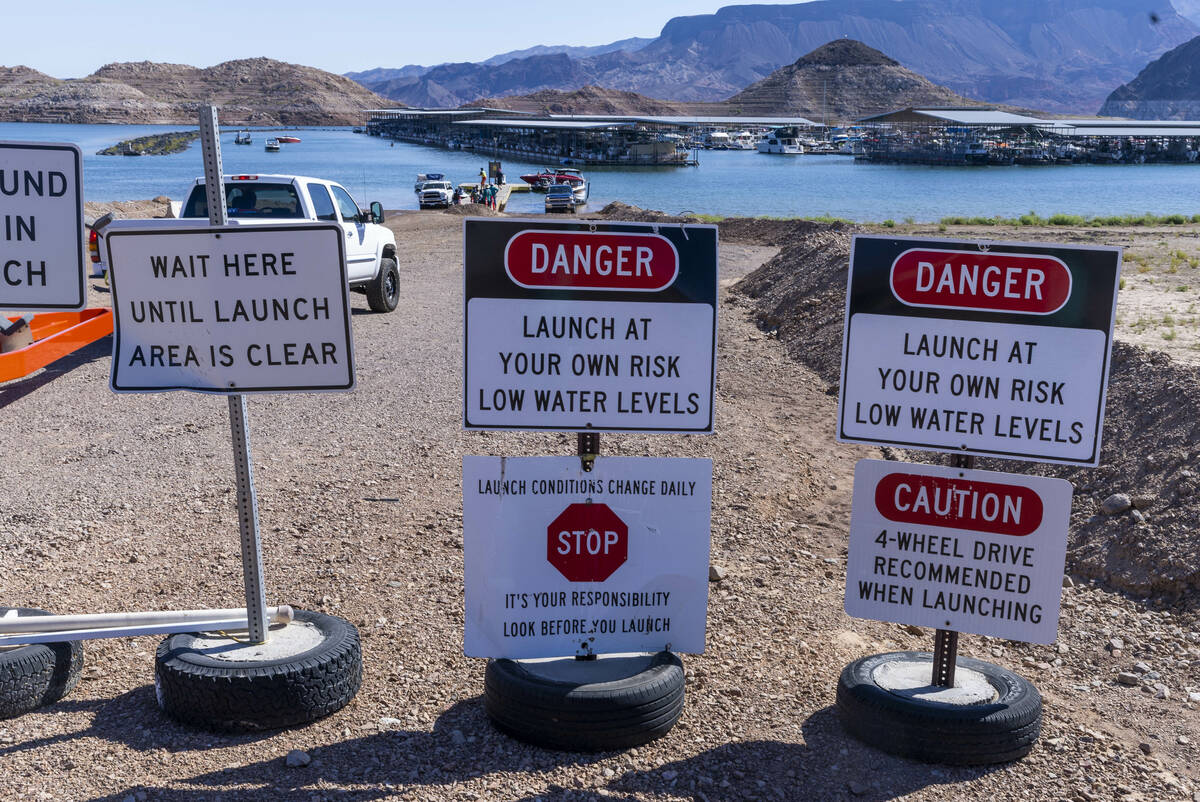 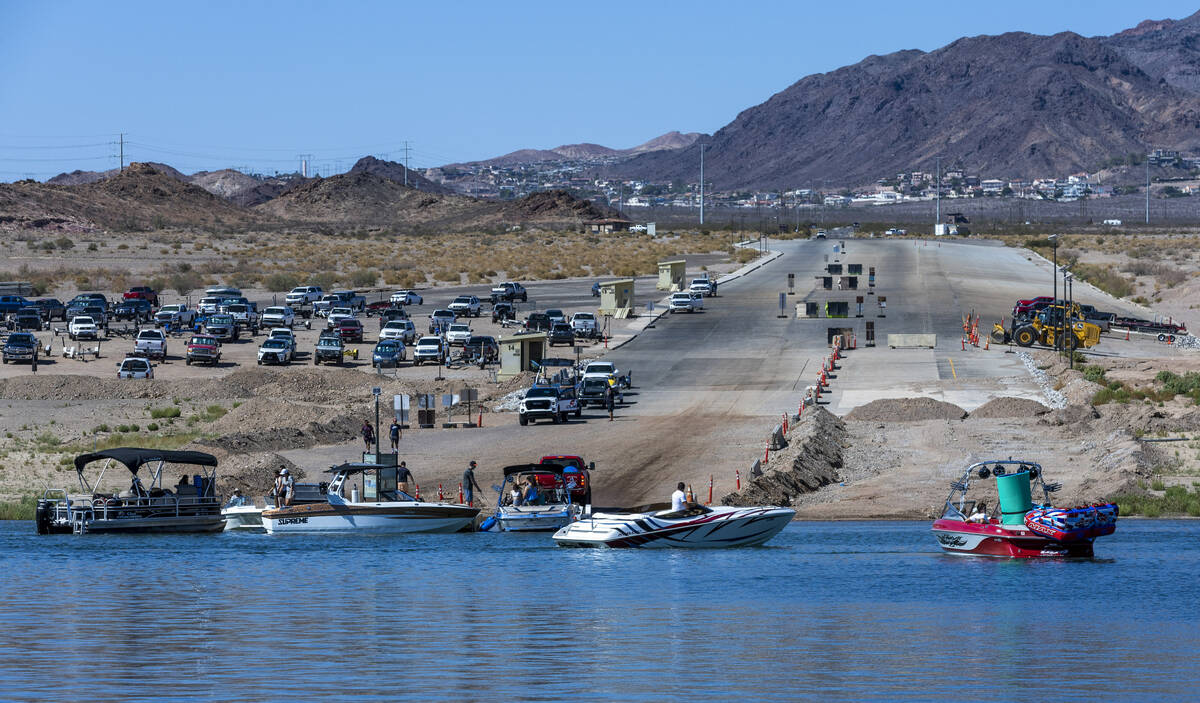 Boats line up to launch and be taken out at Hemenway Harbor with a short wait time on Labor Day at the Lake Mead National Recreation Area on Monday, Sept. 5, 2022, near Boulder City. (L.E. Baskow/Las Vegas Review-Journal) @Left_Eye_Images 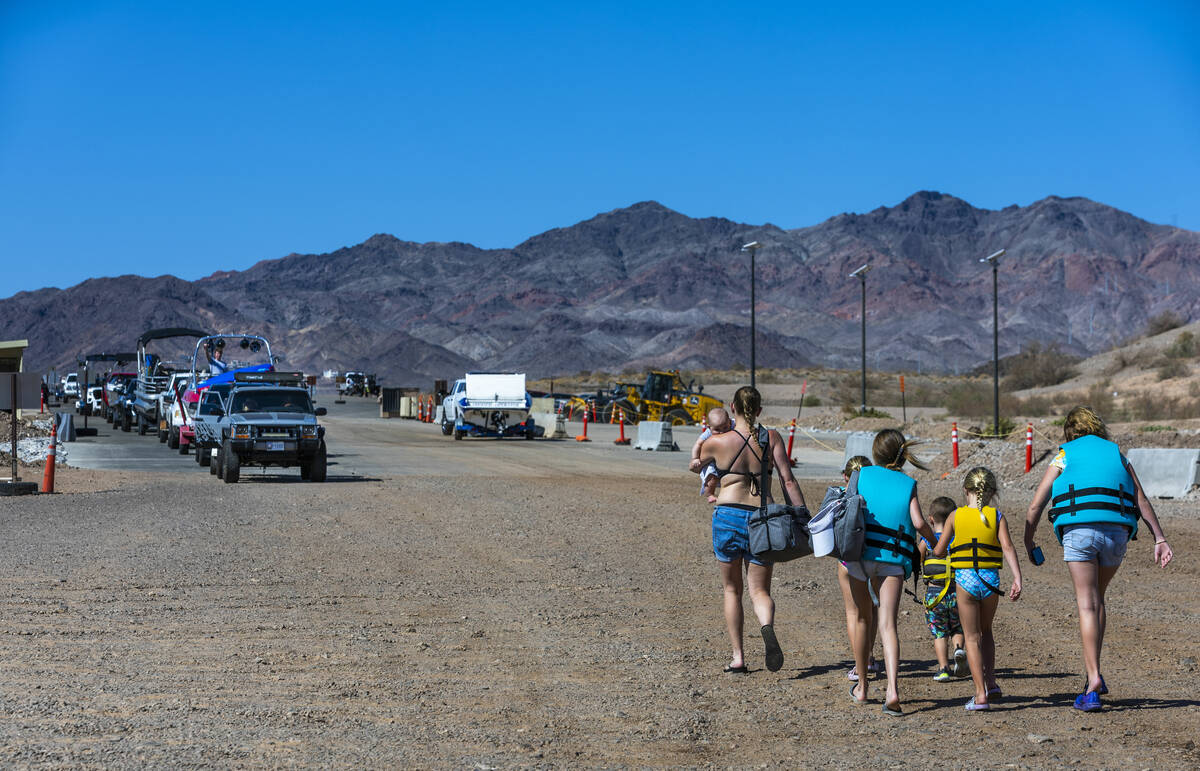 Boats line up to launch and be taken out at Hemenway Harbor with an average half hour wait time on Labor Day at the Lake Mead National Recreation Area on Monday, Sept. 5, 2022, near Boulder City. (L.E. Baskow/Las Vegas Review-Journal) @Left_Eye_Images 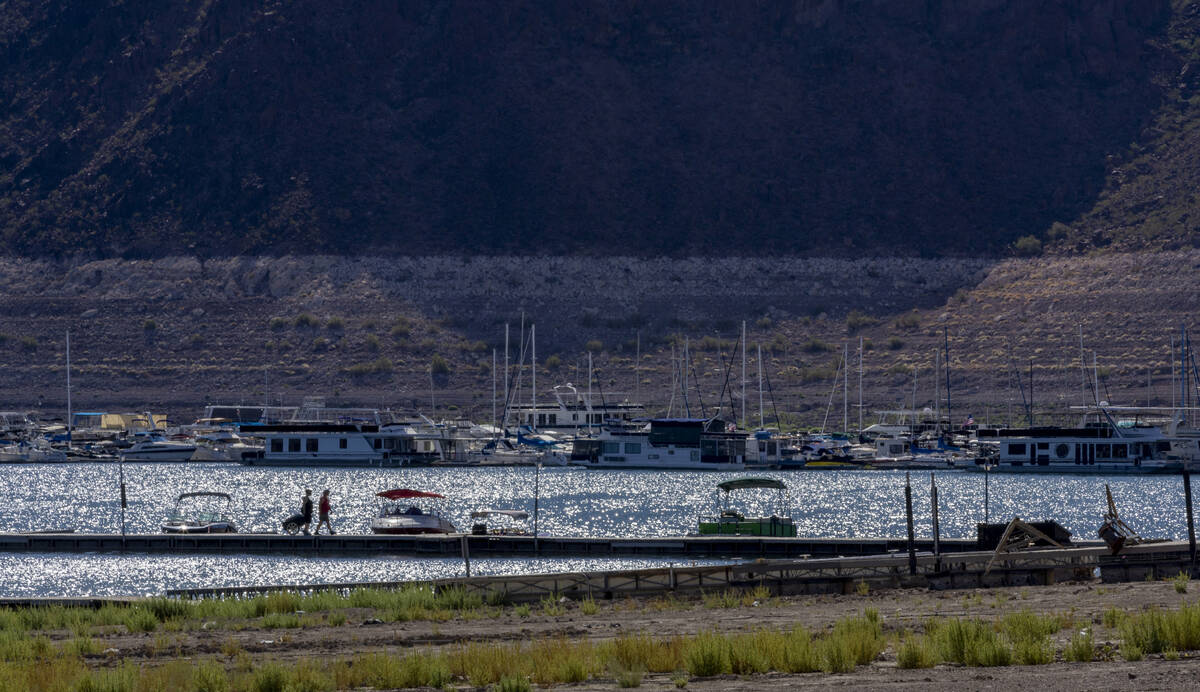 After falling more than 27 feet since the start of the year, Lake Mead got a bit of a bump thanks in part to the August monsoon season.

But in the face of a megadrought that has gripped the Southwest for more than two decades, the small uptick is a drop in the nation’s largest bucket of water. That’s because the late summer monsoons, even in wet years, are a much smaller contributor to the region’s water supplies than the the all-important spring snowmelt in the western Rockies.

“Compared to reservoir size, contribution from rainfall is relatively small. This monsoon season will not result in any meaningful changes in the long term trend of declining water levels in Lake Mead,” said Sajjad Ahmad, chair of UNLV’s civil and environmental engineering department.

Ahmad said there were several factors that contributed to that rise, including rainfall across the upper Colorado River basin, reduced evaporation thanks to relatively higher humidity and lower water use in Arizona and California due to rains reducing the need to irrigate. He also pointed to data showing that more water was released downstream from Lake Powell to Lake Mead in August than what was released in July.

All told, Lake Mead rose more than 3 feet in August to 1,044.28 feet elevation, according to Bureau of Reclamation data. That’s about 2.5 feet higher than reclamation had projected in its most recent two-year projection. The Las Vegas Valley saw 0.61 inches of rain in August as measured at Harry Reid International Airport, about double the annual 30-year average.

The Bureau of Reclamation released 67,000 acre-feet less water from Hoover Dam than originally modeled for August thanks to reduced water demands in Arizona and California, which equated to about 0.9 feet of the lake’s rise, reclamation spokeswoman Michelle Helms said in an email. Rain runoff into the tributaries that eventually feed into Lake Mead contributed about 112,000 acre-feet more water than what the bureau projected, which accounted for about 1.6 feet of the reservoir’s rise, Helms said.

Historically, August has provided small boosts to the reservoir more often than not over the past two decades, according to Bureau of Reclamation data. Lake Mead’s levels rose in the month of August in 16 out of the 23 years since. Some years that rise was as little as 1.4 inches, while other saw the lake’s levels rise as much as 6 feet.

But those bumps have done little to stem the reservoir’s overall fall since the drought began two decades ago due to chronic overuse and a Colorado River basin that continues to grow hotter and drier.

“Summer rains are usually not a major contributor to our water supply,” said Nevada State Climatologist and University of Nevada Professor Steph McAfee. “Most of the precipitation that is driving flow in the Colorado River is really winter snow.”

August proved to be a nice reprieve for both the valley and Lake Mead, but the coming months look more likely to bring a return to the hotter, drier weather the Colorado River basin has become accustomed to over the last 20 years. But McAfee said there’s still room to keep your fingers crossed.

The fall forecast from the National Oceanic and Atmospheric Administration shows the majority of the upper basin, which includes Utah, Colorado, Wyoming and New Mexico, are expected to be drier and hotter than normal, with a 40 to 50 percent chance of precipitation being below average.

The heat forecast is more concerning to McAfee. With higher than normal temperatures expected, the late-fall storms that would normally drop snow that forms the early snowpack will likely bring rain instead, much of which would likely evaporate rather than adding to the much-needed snowpack.

“I would be very concerned if the upper Colorado River basin were to have another very dry winter,” McAfee said.

The surface of Lake Mead now sits about 170 feet lower than it was in early 2000. The latest projections from the Bureau of Reclamation show the lake dropping another 30 feet to 1,013.7 feet by July 2024. Those projections triggered another series of cuts for water supplies in Nevada and Arizona.

The federal government has tasked Nevada and the six other Colorado River basin states to come up with plans to further reduce water use along the basin by as much as 30 percent starting next year on top of those mandated cuts, but so far those talks have not produced any concrete deals.