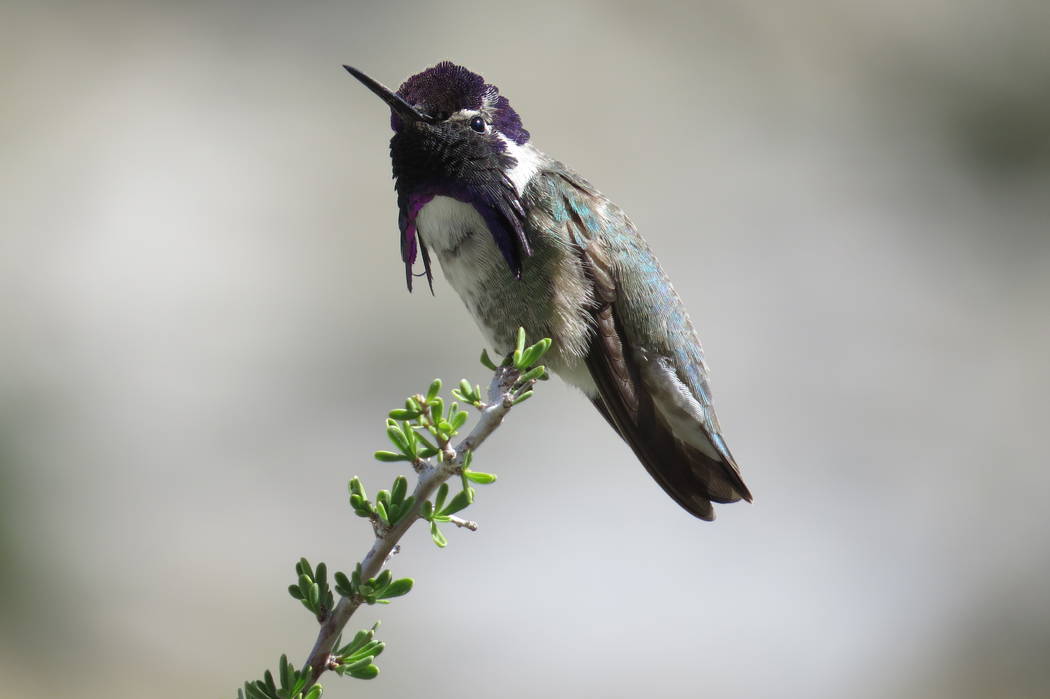 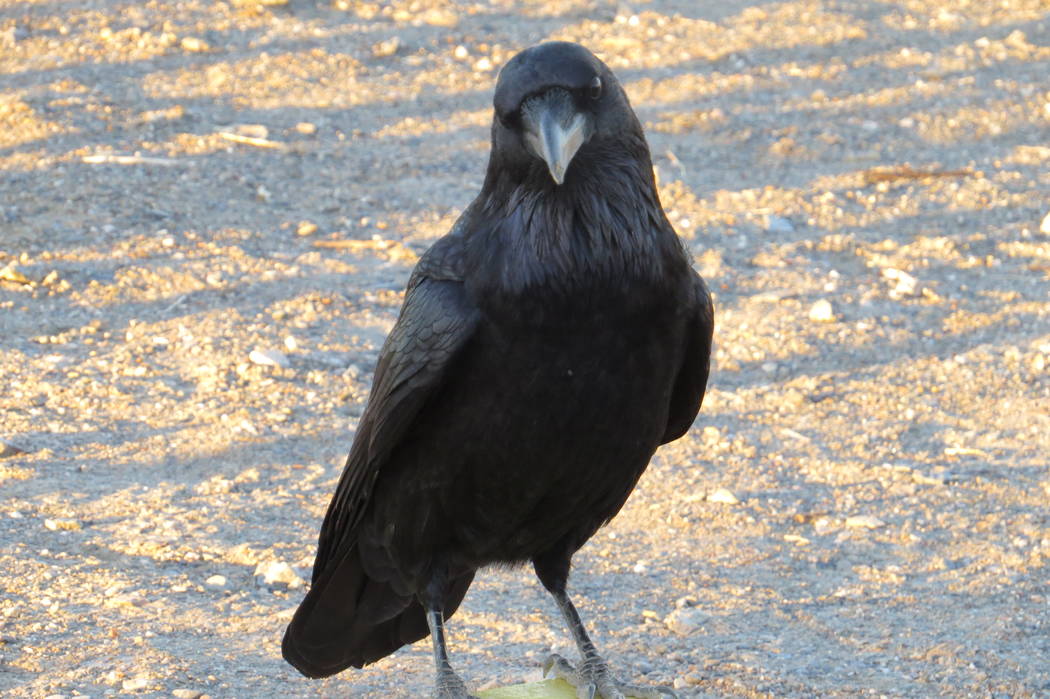 Common ravens, like this one at Death Valley National Park, are one of the only species to see their numbers grow in the Mojave Desert over the past century, according to a new study by the University of California-Berkeley. Chelsea Hofmeier 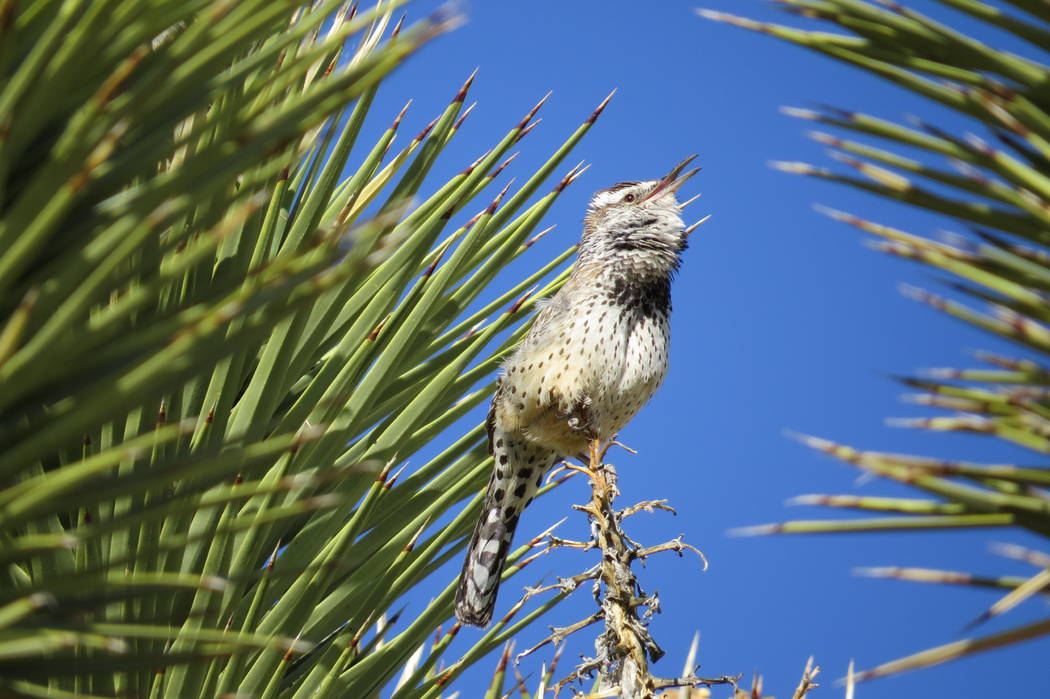 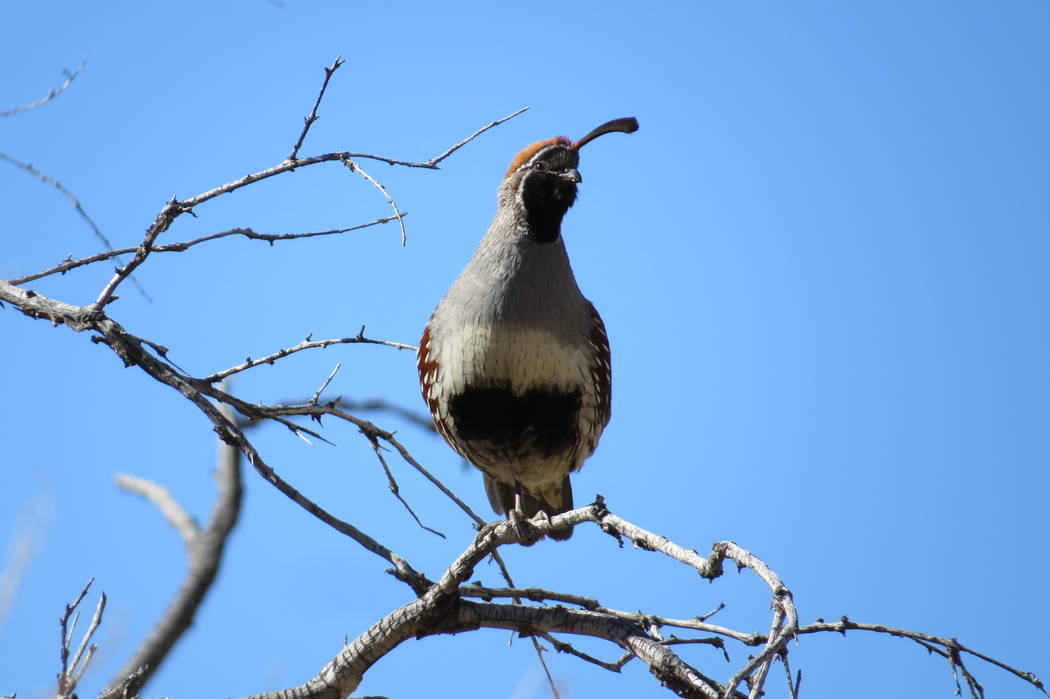 A Gambel's quail perches on a branch at Joshua Tree National Park in an undated photo. Chelsea Hofmeier

Bird populations have collapsed in the desert along the Nevada-California border, and climate change could be to blame, according to a new study by scientists at the University of California, Berkeley.

Over the past century, the number of bird species has fallen by an average of 43 percent at survey sites across an area larger than New York state. Almost a third of species are less common and widespread now than they once were throughout the region.

The study’s authors, Steven Beissinger and Kelly Iknayan, point to less hospitable conditions in the Mojave as the probable cause.

“California deserts have already experienced quite a bit of drying and warming because of climate change, and this might be enough to push birds over the edge,” said Iknayan, who conducted the research for her doctoral thesis at UC Berkeley. “It seems like we are losing part of the desert ecosystem.”

“The Mojave Desert is now nearly half empty of birds,” said Beissinger, a UC Berkeley professor of environmental science, policy and management. “This appears to be a new baseline, and we don’t know if it’s stable or if it will continue to decline.”

The researchers spent three years searching for birds at 61 locations on both sides of the border, including survey sites in the Spring Mountains and at Desert National Wildlife Refuge, just outside of Las Vegas.

They also surveyed sites across Death Valley and Joshua Tree national parks and Mojave National Preserve, literally retracing the steps of famed UC Berkeley biologist Joseph Grinnell and his students from as far back as 1908. 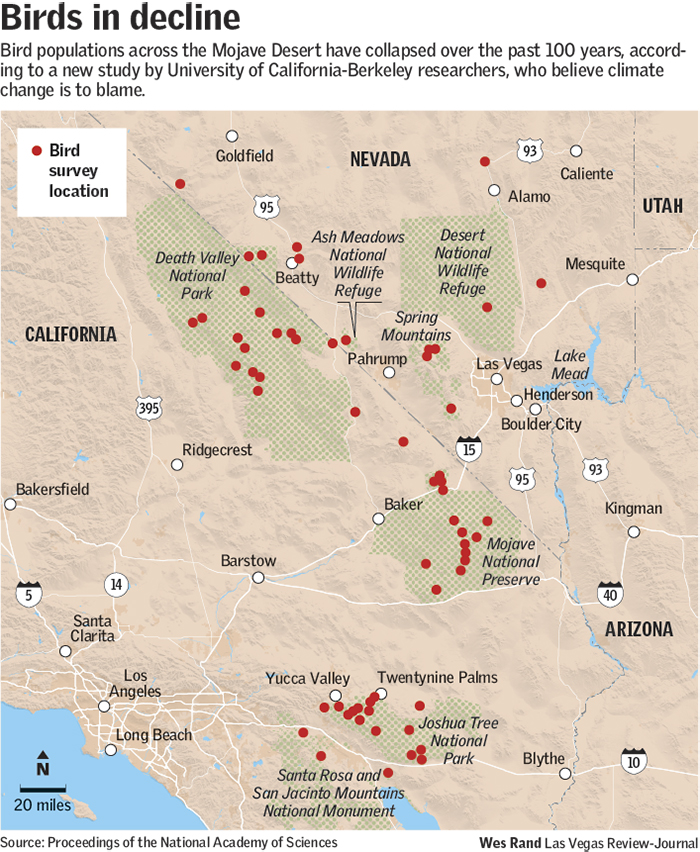 Grinnell carefully recorded bird and mammal distribution throughout California using a method of collecting field notes that is still widely used today. Iknayan revisited the same sites Grinnell and his colleagues surveyed between 1908 and 1947 and walked a path as close to theirs as possible as she charted all the birds she saw and heard.

The past and present “occupancy” data was then compared and cross-referenced with short-term climate variation, long-term temperature and rainfall trends and habitat changes caused by wildfires, livestock grazing and other factors.

Their findings were published last week in the journal Proceedings of the National Academy of Sciences.

The decline of birds could impact the animals that prey on them and desert plants that rely on birds to pollinate their flowers and spread their seeds.

Researchers are calling it a collapse because it has occurred across the entire desert bird community.

“Studies elsewhere have found that climate change typically makes places unfavorable for some birds but opens the door for others to come in,” Iknayan said. “In the desert we are not seeing increases in any of our species except for the common raven. There are a lack of climate change winners in the system.”