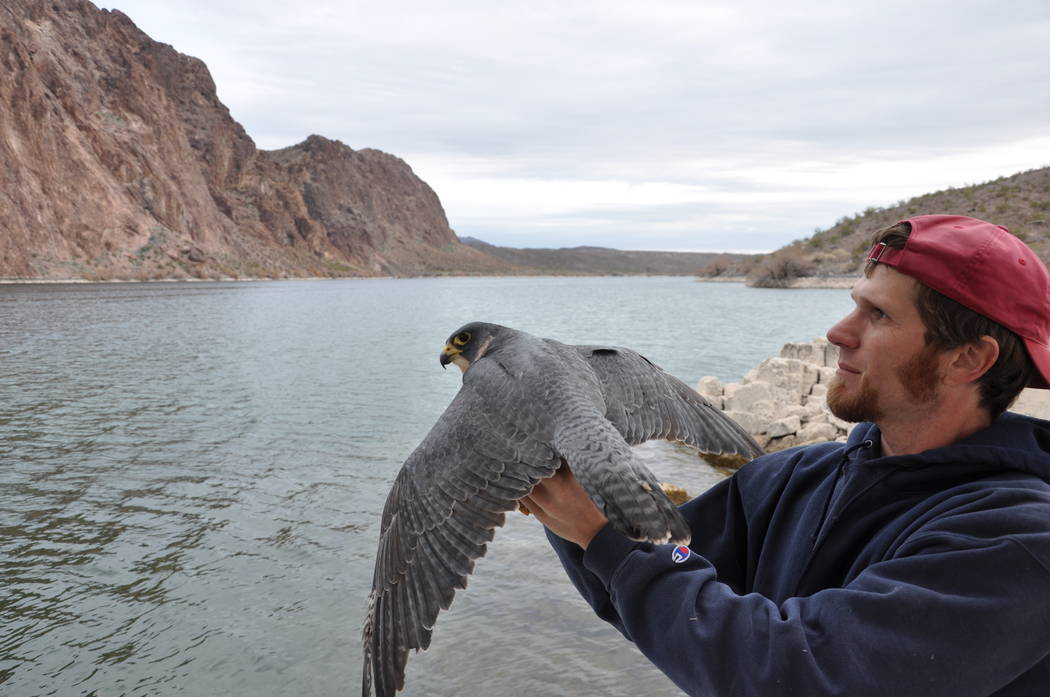 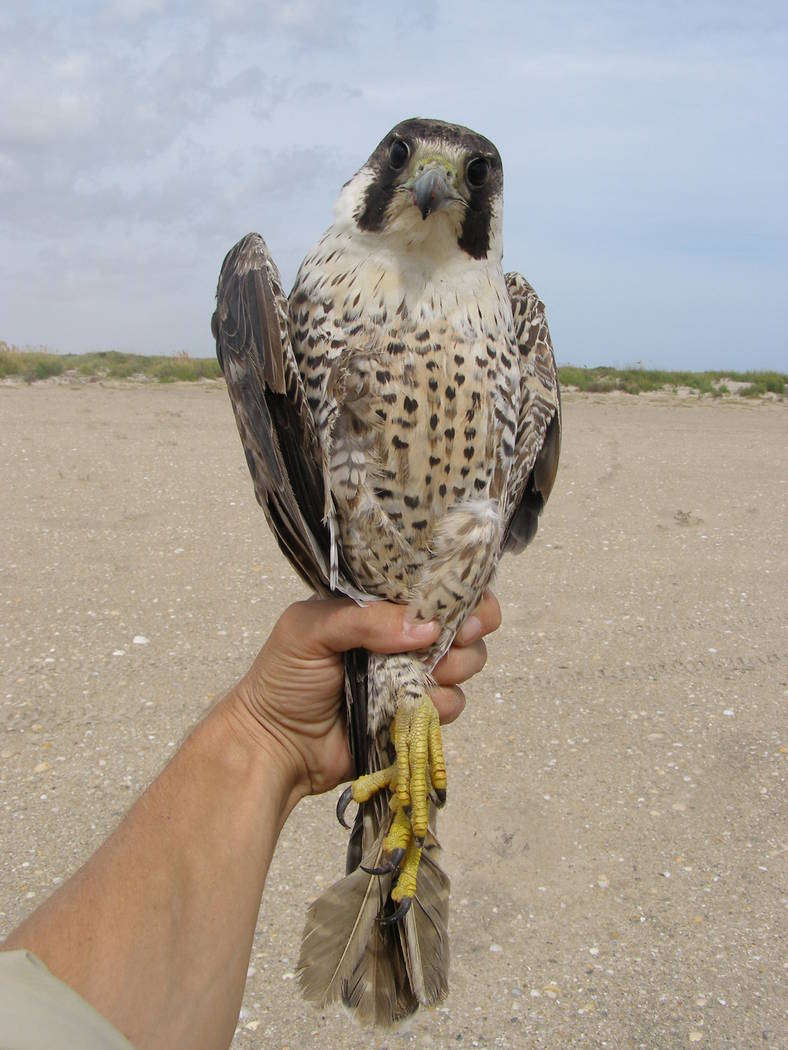 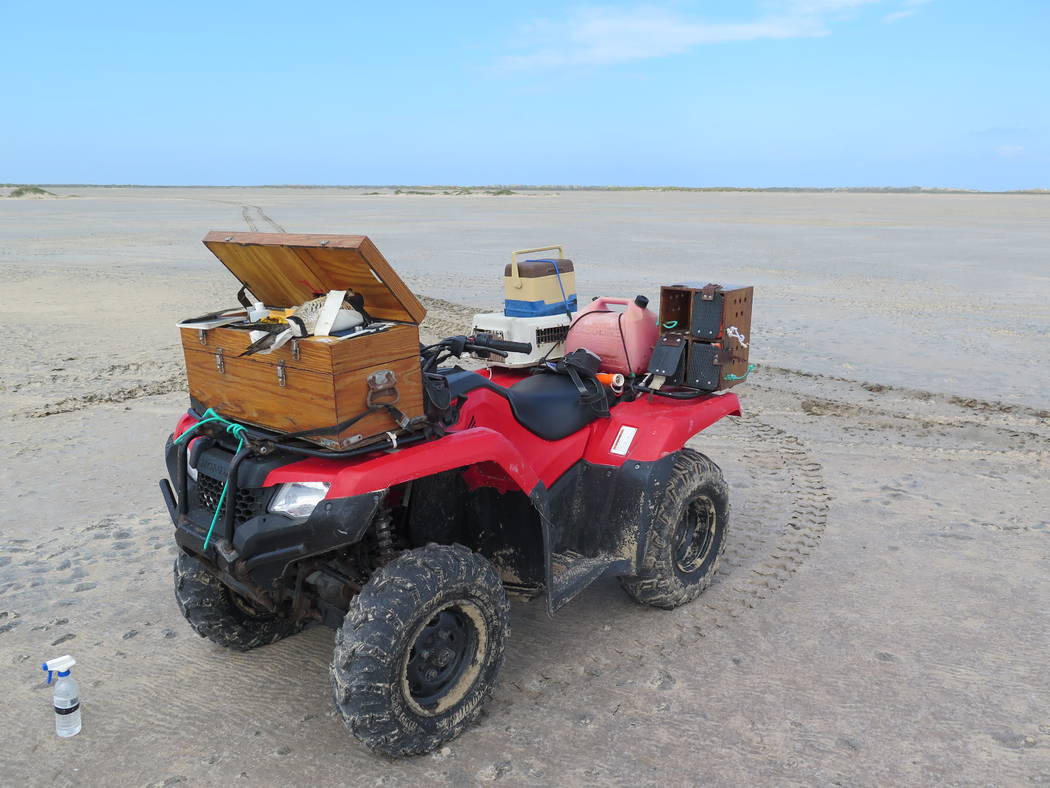 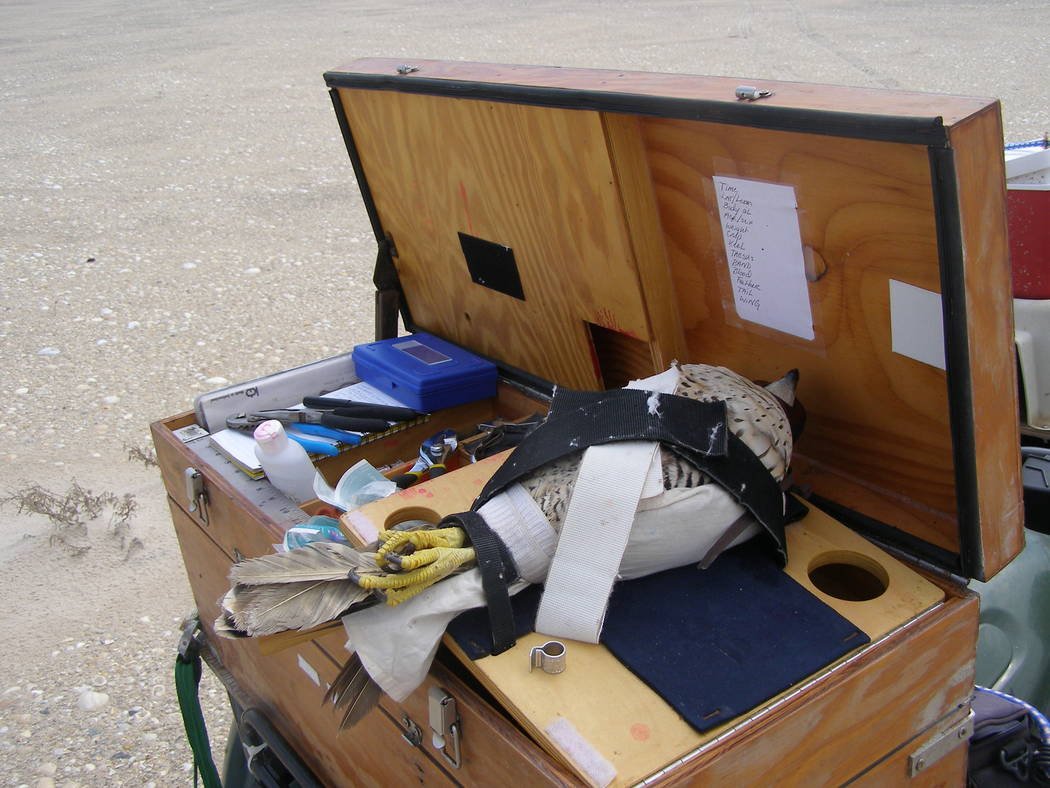 A female peregrine falcon waits to be examined on a mobile sampling station mounted to the back of an ATV on South Padre Island in Texas in 2012. Joe Barnes 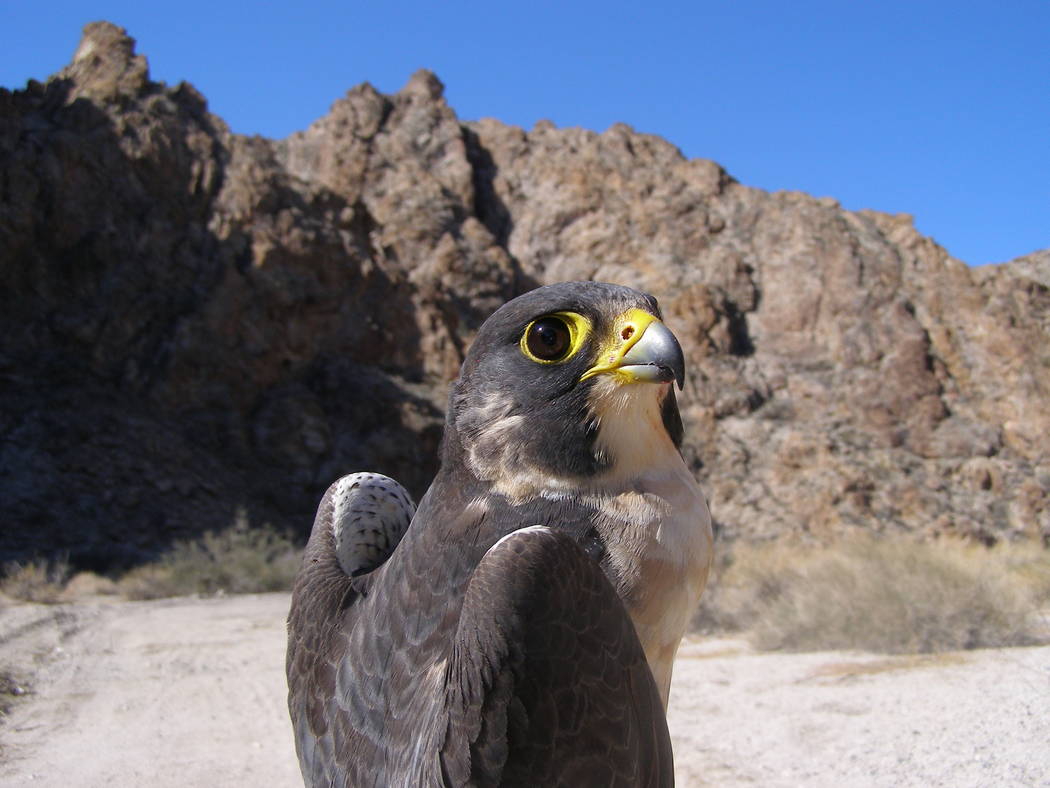 An adult male peregrine falcon is photographed after being captured in Southern Nevada in 2012. Joe Barnes 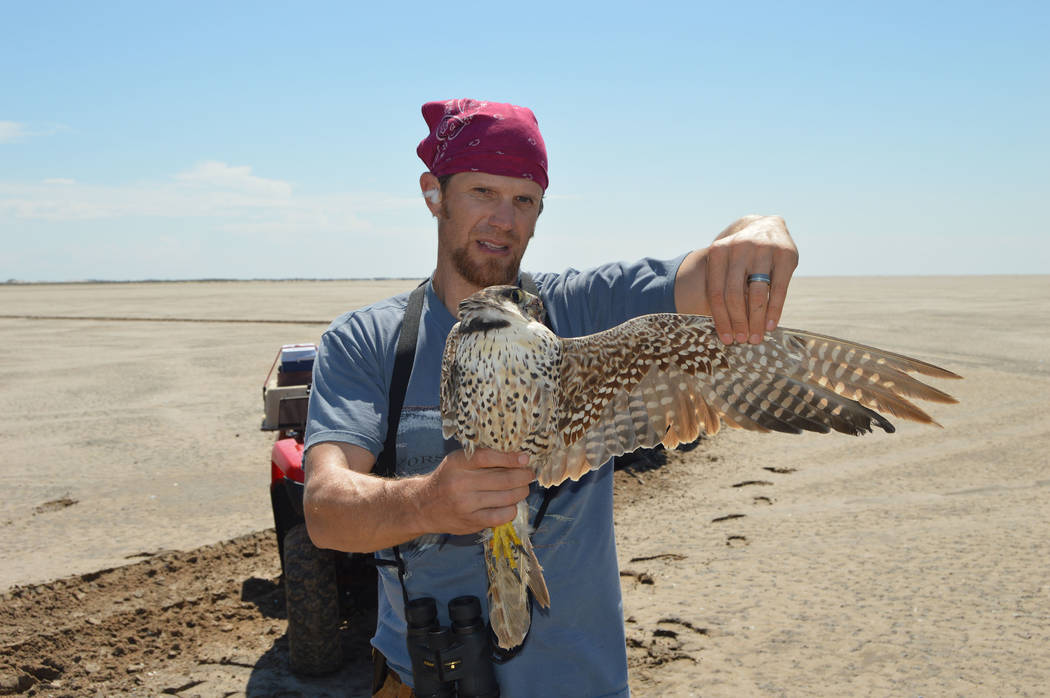 Biologist Joe Barnes assesses the plumage of a 2-year-old peregrine falcon on South Padre Island in Texas in 2015. Joe Barnes 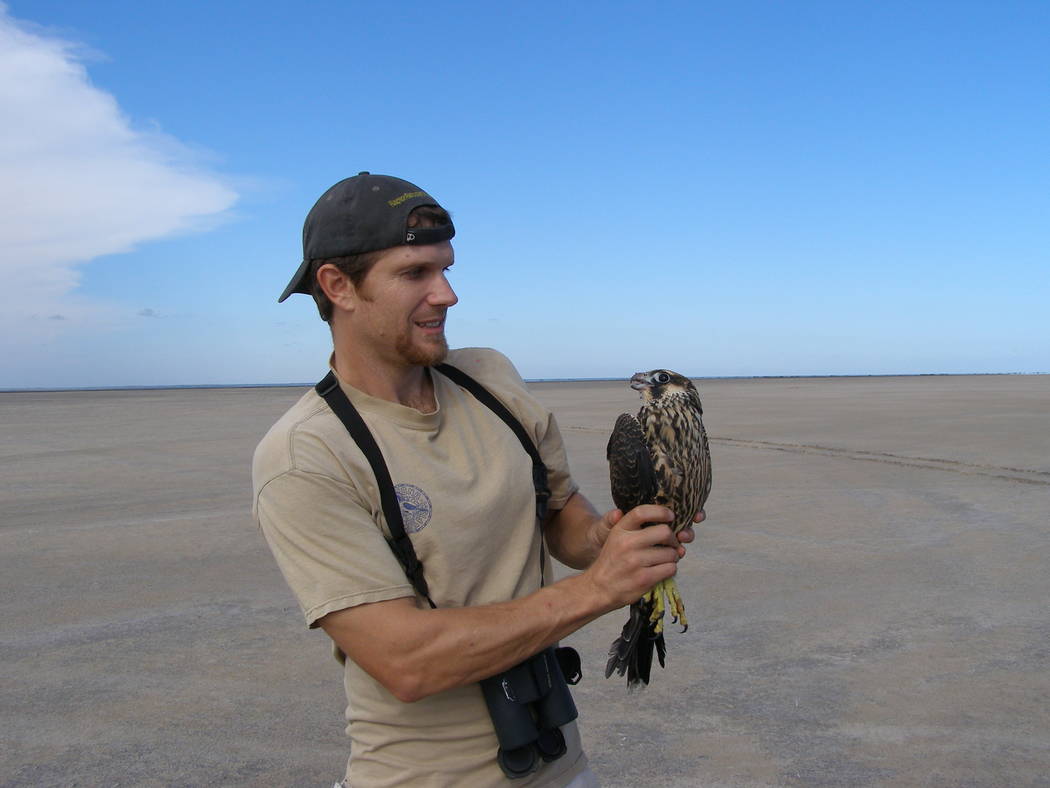 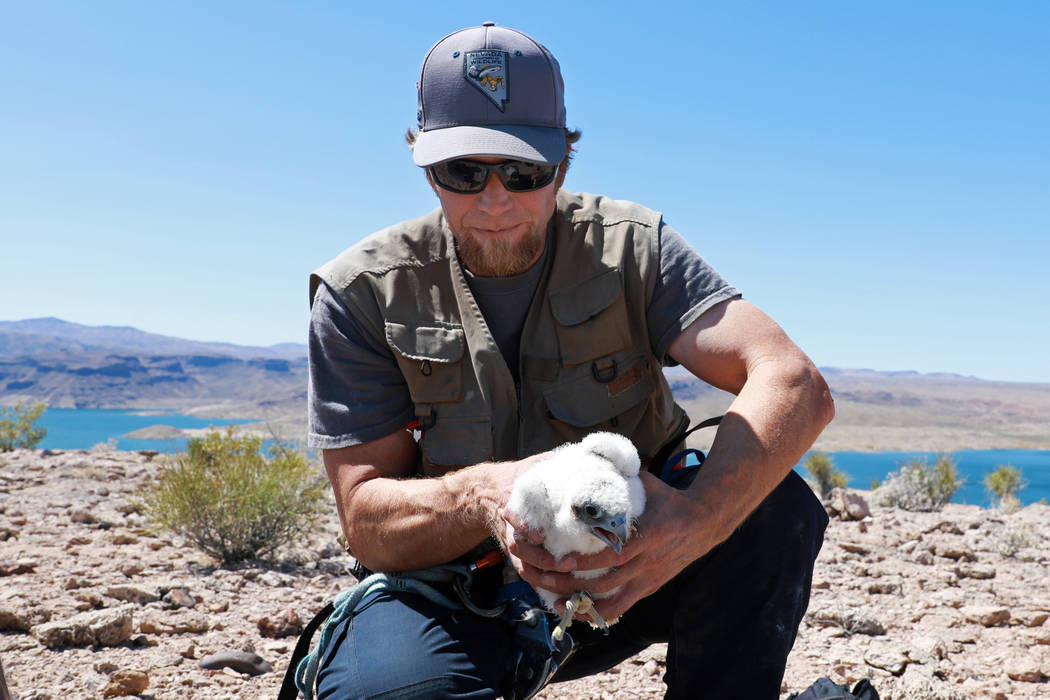 Joe Barnes, a biologist with the Nevada Department of Wildlife, retrieves a peregrine chick from its nest on a ledge overlooking Lake Mead in Temple Bar, Ariz., on Wednesday, May 16, 2018. Barnes weighed and measured each of the three chicks, collected samples of their feathers and fit metal identification bands around their legs. Andrea Cornejo Las Vegas Review-Journal @DreaCornejo 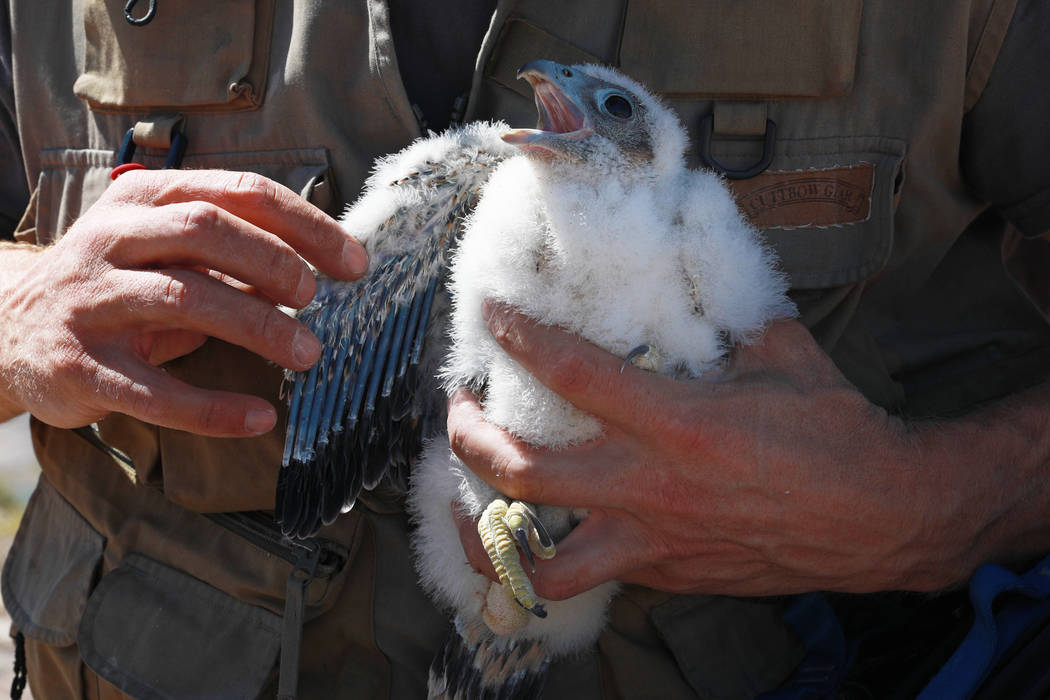 Joe Barnes, a biologist with the Nevada Department of Wildlife, examines a peregrine chick on a ledge overlooking Lake Mead in Temple Bar, Ariz., on Wednesday, May 16, 2018. Barnes weighed and measured each of the three chicks, collected samples of their feathers and fit metal identification bands around their legs. Andrea Cornejo Las Vegas Review-Journal @DreaCornejo 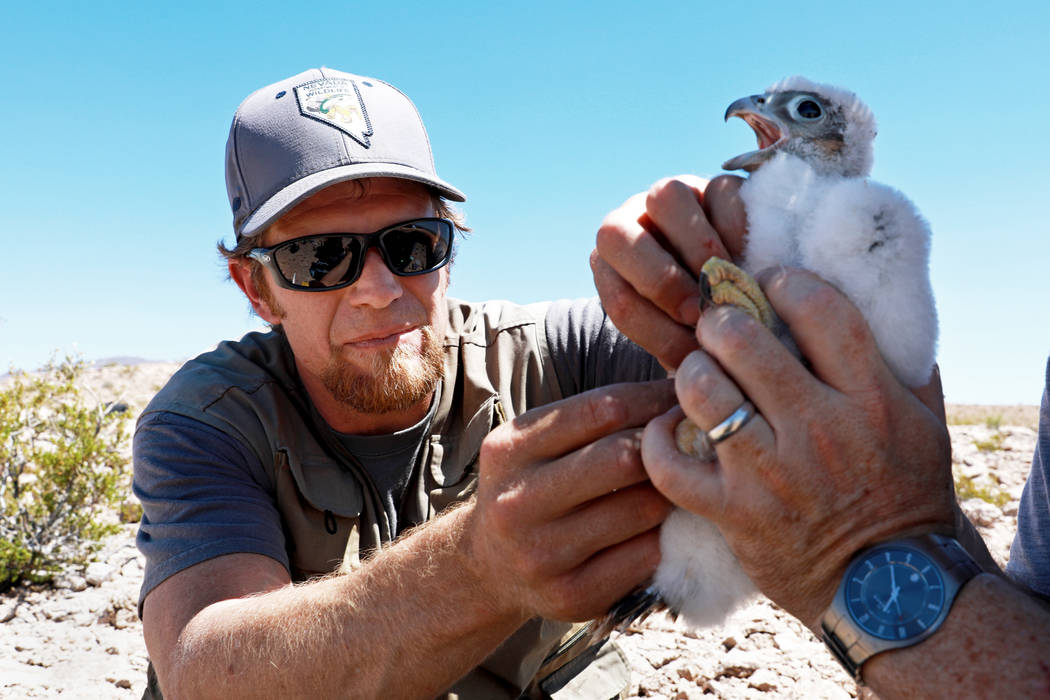 Joe Barnes, a biologist with the Nevada Department of Wildlife, plucks a couple of feathers from a peregrine chick on a ledge overlooking Lake Mead in Temple Bar, Ariz., on Wednesday, May 16, 2018. Barnes weighed and measured each of the three chicks, collected samples of their feathers and fit metal identification bands around their legs. Andrea Cornejo Las Vegas Review-Journal @DreaCornejo

Not even the fastest bird on Earth can outrun mercury contamination.

The toxic element is turning up in the feathers of peregrine falcons from coast to coast, including those living full time at Lake Mead National Recreation Area, according to a new study by Nevada Department of Wildlife biologist Joe Barnes.

Over the past decade, Barnes has tested for mercury in 700 individual peregrines in Southern Nevada, Washington, Maryland and the Gulf Coast of Texas.

“Every single one of them was impacted, regardless of whether they live in wide-open desert or Lake Mead or Greenland or coastal British Columbia,” he said.

The latest findings from his ongoing work were published last month in the Journal of Raptor Research.

Barnes said more research is needed to determine how much of the toxic substance peregrine falcons can tolerate, but studies of other raptors suggest that mercury concentrations of between 5 and 15 parts per million can significantly reduce breeding success.

Peregrines are “one of the most impacted species when it comes to contamination,” Barnes said, because they feed on other birds that have been exposed to mercury.

In the case of Lake Mead, the most likely culprit is the eared grebe, a small water bird that migrates through the area by the hundreds of thousands and represents the peregrine’s most common local prey species.

“It’s kind of the old concept of you are what you eat,” he said.

The peregrine falcon hunts almost anything that flies, including birds and bats. It dives on its prey from above with its wings closed, enabling it to reach speeds of more than 200 mph.

Barnes said peregrines are a great indicator of overall ecosystem health because they are found on every continent except Antarctica and they feed on such a wide variety of species, from hummingbirds to Canada geese.

“They’re effectively sampling the environment for me,” he said.

Raptors on the rebound

Ryan Bourbour is a biologist and doctoral student at the University of California, Davis, where he has also been studying mercury exposure trends in North American raptors.

He said the work Barnes is doing is important — and not just for birds.

“Mercury pollution is a global issue, and even low levels of exposure can impact human and wildlife health,” Bourbour said in an email. “So assessing exposure levels in top predators, such as peregrine falcons, can help us biomonitor mercury pollution trends, which may have conservation implications and even human health implications.”

So far, the falcons Barnes is studying show no ill effects from their exposure.

“On a population level, it doesn’t seem to be impacting them yet,” he said.

Quite the opposite in fact.

DDT and similar pesticides nearly wiped out the bird in North America and parts of Europe 50 years ago, but the peregrine bounced back enough to be removed from the endangered species list once those chemicals were banned.

“It’s really neat to be tracking this huge success story,” he said.

Barnes has been collecting samples from peregrines off and on since 2001. Clipping feathers is the safest, least invasive way he has found yet, he said.

“It doesn’t make them happy,” he said. “But other than that, it doesn’t hurt them.”

Down but not out

Feathers are perfect for monitoring mercury exposure, Barnes said, because the toxic metal collects in them while they are still connected to the bird’s blood supply and it stays there even after the feathers fall off or the bird dies.

That means Barnes can also test for mercury in the feathers of the birds peregrines commonly eat simply by sweeping up “prey remains” from the nests he monitors.

So far, he has identified well over 90 different prey species from the feathers he has collected from the falcons’ favorite nesting sites around Lake Mead and Lake Mohave.

Though mercury does occur naturally, Barnes said research suggests that levels of the pollutant have increased by 300 percent since the start of the industrial revolution. The almost-universal presence of mercury in peregrines is yet another sign of humanity’s global impact on the environment.

“I don’t want to be doom and gloom about it. It’s just adding to our understanding of what’s out there,” he said. “Peregrines are sort of the canary in the coal mine here.”